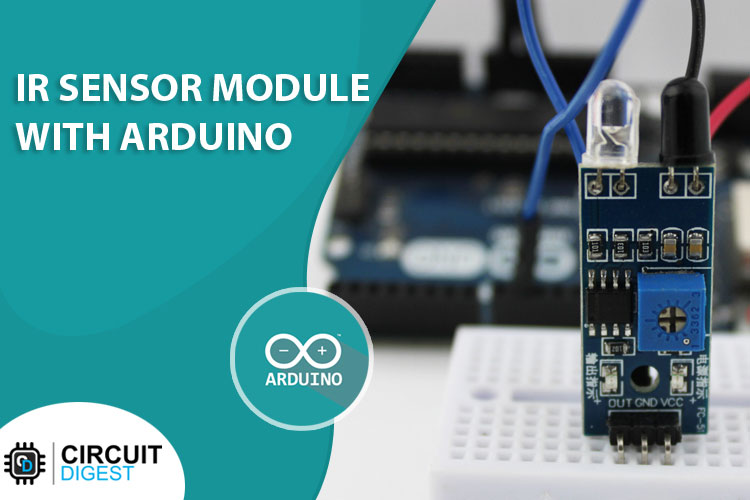 An infrared proximity sensor or IR Sensor is an electronic device that emits infrared lights to sense some aspect of the surroundings and can be employed to detect the motion of an object. As this is a passive sensor, it can only measure infrared radiation. This sensor is very common in the electronic industry and if you’ve ever tried to design an obstacle avoidance robot or any other proximity detection-based system, chances are you already know about this module, and if you don’t, then follow this article as here we will discuss everything about it.

The IR sensor has a 3-pin connector that interfaces it to the outside world. The connections are as follows: 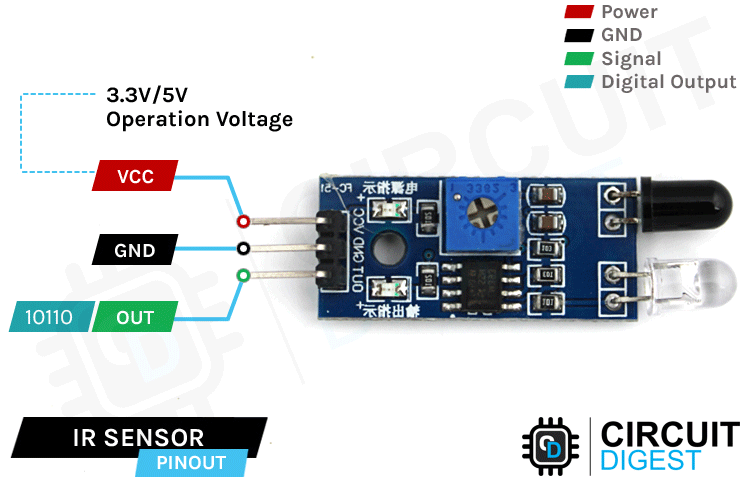 VCC  is the power supply pin for the IR sensor which we connect to the 5V pin on the Arduino.

GND Should be connected to the ground of the Arduino.

How Does an IR Motion Sensor Module Work?

An IR proximity sensor works by applying a voltage to the onboard Infrared Light Emitting Diode which in turn emits infrared light. This light propagates through the air and hits an object, after that the light gets reflected in the photodiode sensor. If the object is close, the reflected light will be stronger, if the object is far away, the reflected light will be weaker. If you look closely toward the module. When the sensor becomes active it sends a corresponding Low signal through the output pin that can be sensed by an Arduino or any kind of microcontroller to execute a particular task. The one cool thing about this module is that it has two onboard LEDs built-in, one of which lights on when power is available and another one turns on when the circuit gets triggered.

For most of the Arduino projects, this sensor is used to detect proximity or to build obstacle avoidance robots. This Sensor is popular among beginners as these are low power, low cost, rugged, and feature a wide sensing range that can be trimmed down to adjust the sensitivity. 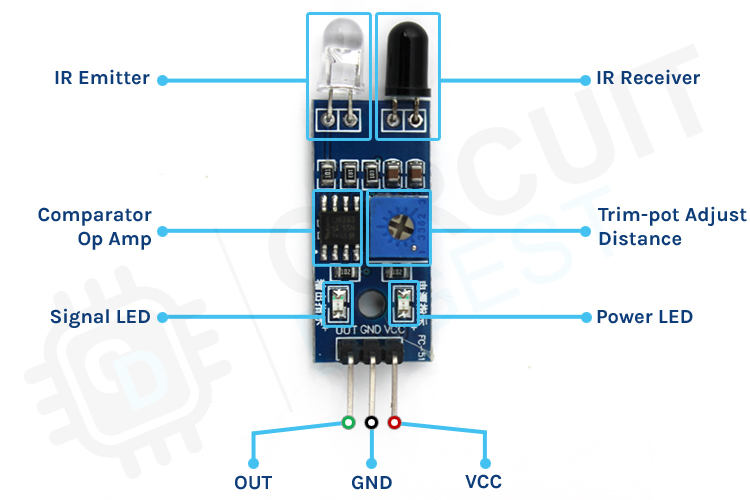 This sensor has three pins two of which are power pins leveled VCC and GND and the other one is the sense/data pin which is shown in the diagram above. It has an onboard power LED and a signal LED the power LED turns on when power is applied to the board the signal LED turns on when the circuit is triggered. This board also has a comparator Op-amp that is responsible for converting the incoming analog signal from the photodiode to a digital signal. We also have a sensitivity adjustment potentiometer; with that, we can adjust the sensitivity of the device. Last and finally, we have the photodiode and the IR emitting LED pair which all together make the total IR Proximity Sensor Module.

What is the Input Power of the IR Sensor?

The IR proximity Sensor module can be powered by both 3.3V and 5V supplies. This enables the module to be used in both 5V systems like Arduino and 3.3V systems like raspberry pi.

What is the Range of an IR Sensor Module?

This sensor can detect an object if the distance in between the object and the sensor is 2 to 10 cm. Further you can also control the maximum distance of the sensor by adjusting the trim pot on the module.

How do you test an IR sensor Module?

Testing your IR sensor module is easy, just power the Vcc and Gnd pin with 5V and Ground respectively and bring your hand near the IR sensors. You should be able to see the signal LED on the module turn on if everything is working.

The schematic diagram of the IR Motion sensor is shown below. The schematic itself is very simple and needs a handful of generic components to build. If you don't have a prebuilt module on hand but still want to test your project, the schematic below will come in handy.

In the schematic, we have an IR LED as Transmitter and the Photodiode as a Receiver. If an object is in front of the sensor, the reflected light from the object is received by the photodiode, and depending upon the intensity we can determine how far or how close the object is. In the schematic, you can also find an LM358 Op-Amp which is doing all the comparison work and generating the output. Other than that, there is a potentiometer that can be used to adjust the sensitivity of the IR Sensor module or the triggering distance for this module.

Now that we have a complete understanding of how an IR sensor works, we can connect all the required wires to Arduino as shown below. 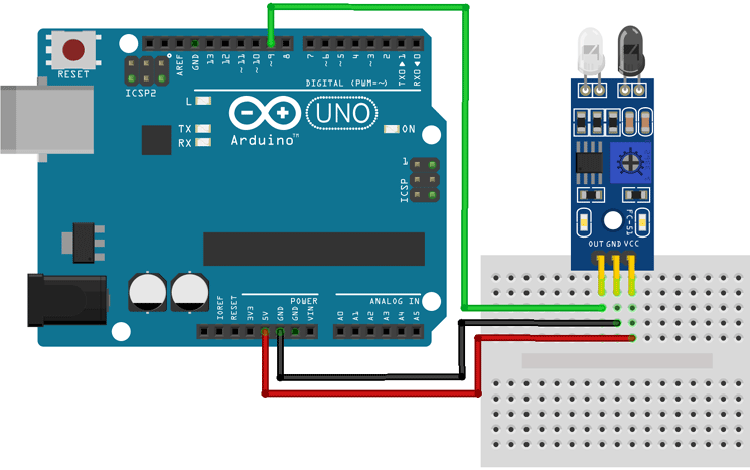 Connecting the IR sensor to any microcontroller is really simple. As we know this sensor outputs a digital signal and processing this signal is very easy. There exist two methods to do so first, you can always check the port in an infinite loop to see when the port changes its state from high to low, or the other way is to do it with an interrupt if you are making a complicated project the interrupt method is recommended. Power the IR with 5V or 3.3V and connect ground to ground. Then connect the output to a digital pin D9. We have just used a Male to Female Jumper wire to connect the IR sensor module with Arduino board as shown below. 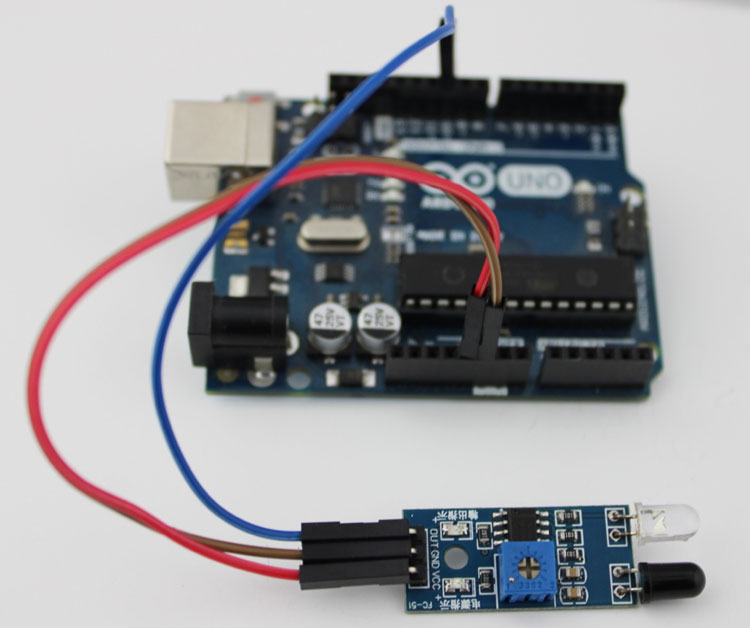 With that, you’re now ready to upload some code and get the IR Motion Sensor working. You can also check out the above module in action at the bottom of this article.

The Arduino IR sensor module code is very simple and easy to understand. We are just basically keeping track of whether the input to pin D9 is HIGH or LOW.

That is the end of our simple Arduino based IR sensor code.

The GIF shows the IR sensor module in action, you can notice the LED turn on both on the module and on the Arduino board as pointed buy the red arrows.  If you are working with an IR Motion Sensor Module for the first time then you should get a response similar to this.

Previously we have used this IR sensor to build many interesting projects. If you want to know more about those topics, links are given below. 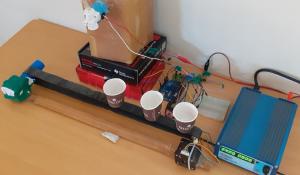 Build your own simple and efficient bottle filler machine with Arduino and readily available material that can be used to pour drinks at parties or if you have to fill many bottles in a day this device can be a lifesaver. 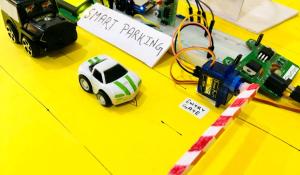 If you are having a parkin issue in your locality or apartment you can build this simple IOT based Smart Parking System that uses an IR sensor opens the gate and gives you update over the internet to your phone. 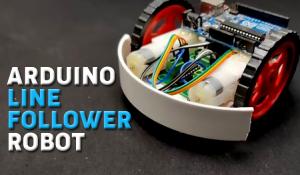 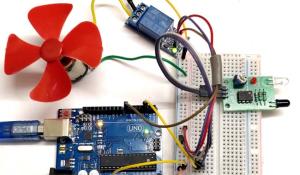 If you are a beginner and looking for simple projects this one can be a good choice for you because it uses IR sensor motor and a relay to turn on a fan when you stand in front of it.

With this we are concluding our article on IR sensor module and its working with Arduino. Hope you have enjoyed reading this and learnt something useful. Now it’s time for you build something exciting on your own, lets us know what you are doing with this module in the comment section below and if you have any questions or problems feel to free to post them on our forums and we will get back to you.

Serial.println("Serial Working"); // Test to check if serial is working or not

// if the pin is high turn off the onboard Led

//else turn on the onboard LED