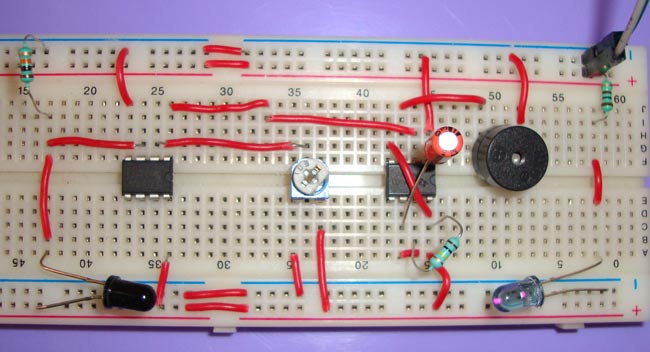 IR based security alarm circuit can detect any movement and trigger the alarm. This circuit is very useful in homes, banks, shops, restricted areas where an alert alarm is needed on any movement. This circuit is based on IR sensor where an IR beam is continuously falling on a photodiode, and whenever this Infrared beam breaks, by any kind of movement, alarm is triggered.

IR sensor consist an IR LED and photodiode, in which IR LED emits IR radiation and photodiode detects the radiation. Photodiode conducts current in reverse direction, whenever light falls on it, and voltage across it changes, this voltage change is sensed by voltage comparator (like LM358) and generates output accordingly. [Also check: IR Sensor Circuit]

In this IR based security alarm circuit, we have placed IR LED in front of photodiode, so that IR light can directly falls on photodiode. Whenever someone moves through this beam, IR rays stops falling on photodiode and Buzzer start beeping. Buzzer automatically stops after some time, as buzzer is connected to 555 timer in monostable mode.

This kind of Alarm can also be build Laser light, (like Laser Security Alarm Circuit) but the benefit of using IR sensor is that IR light in invisible while Laser is visible. Although both are useful and have different scope.

While the IR radiation is falling on Photodiode, the voltage at the non-inverting end (+) of voltage comparator is higher than the inverting end (-) and the output of the comparator is HIGH. And as the comparator output is connected to the trigger PIN of the 555 timer, so the when the Trigger pin 2 is high, the 555 output is low. So during the period when the IR rays falls on Photodiode, the 555 timer output remains LOW. To understand the working of IR sensor with comparator LM358 go through this article: IR Sensor Module Circuit

Now when there is some movement, the falling of IR rays on Photodiode gets interrupted and the voltage at inverting end (Threshold voltage) of voltage comparator becomes higher than non-inverting end, for some moment. This makes the output of comparator LOW and also makes the Trigger PIN 2 of 555 timer LOW. This will trigger the 555 timer, and 555 timer’s OUTPUT goes HIGH and Buzzer beeps for short duration. Duration of the beep can be increased by changing the value of resistor R1 or capacitor C1 (RC network in monostable mode of 555 timer IC). Note that 555 IC gets triggered when Trigger PIN 2 gets LOW.

sir can we use 9 volt battery

sir can we use 9 volt battery instead of 5v

Of course, you can use 9v

Of course, you can use 9v battery.

I am working on this project with a friend and we cannot get it to work properly. We believe the photo diode isn't picking up the IR signal. Any feed back as soon as possible would b greatly appreciated.

Its a very simple circuit and

Its a very simple circuit and should work without any issue. Try to adjust Variable Resistor or replace the component which you believe to be faulty.

sir we r did this project but it nt working properly...wen we connect the buzer it get sound...so wat changes should to...pls tel

Now we got the circuit to

Now we got the circuit to properly to work with a LED in place of the buzzer. However, when the buzzer is in the normal place and movement moves across the photo diode; the buzzer turns on and stays on. Any ideas?

plz.. give me circuit with big decimal speaker

plz.. give me circuit with high decimal speaker

Can i use LDR in replacement

Can i use LDR in replacement to photo diode??
Im not sure but the ckt i assembled was consistently buzzing only.

No, you have to use Photo

No, you have to use Photo Diode to detect the IR radiation.

Sir when i connect this

Sir when i connect this circuit i am not getting result...the buzzer is countineously in on state....could u please help meeee

Maker's of the circuit please help us in finding a way about it.... buzzer is buzzing continuously...instead we placed a LED..same result.... Yours help will be remember forever...

@lenin @Akash Try adjusting the variable resistor RV1. Circuit is quite simple, just follow it, this will work for sure. Also check connections with LM358 IC.

The circuit is very simple ,

I did it and didn't work

Sir can i use tsop 1836 reciver. And how many distance work it? Plz reply me. Im from sri lanka

Check this circuit for TSOP

Check this circuit for TSOP receiver with IR led: IR Transmitter and Receiver

What does the variable resistor do in this circuit? i have tried to figure this out many times but I can't figure out the purpose. please help

thank you. its working for

thank you. its working for me. I want t extend this project. Instead of using a buzzer, I want this circuit to send a sms alert. So how can I proceed.

Check this one : PIR Sensor

Check this one : PIR Sensor and GSM Based Security System

Did u use 5 volt or 9 volt battery

At what distance between LED & photo diode the alarm is triggere

At what distance between LED & photo diode the alarm is triggered

555 timer ic is heating. So and not working circuit so you can Gide me?

If I want to buy this exact kit does any know where I can do this from?
Thanks.

this project is very nice so I am your aprtiater ok

Regarding PCB design of it

Sir,can u send the PCB design of it

sir , instead of buzzer , I wanna insert relay , can I increase the time period of trigger state ??

yes you can do that just by

yes you can do that just by changing the value of RC i.e resistor and capacitor.

Yes as deepakar said the

Yes as deepakar said the value if time period can be changes by changing by RC values. Also yes you can use a relay with its driver circuit in place of the buzzer

Please suggest suitable values of RC and driver circuit to drive a 5V relay at the output which will be used to open a solenoid valve of a tap.

I just noticed that the IR

I just noticed that the IR led has the value of 10K different from what is in the circuit which states 100 ohms only, apparently the photo diode is connected to 100 ohms instead of 10k.. ur schematic and actual photo shot of the circuit didnt match..

Its given correctly in the

will the beeping gets higher

will the beeping gets higher when the obstacle comes close?
if no what should be done to vary the beeping as he object moves closer to the reciever?

what was the advantage of this product

this will for ac voltage .

No, if you want to power with

No, if you want to power with AC mains use a adapter which will convert 220AC to 12V or 5V

What should I do if I want

What should I do if I want the circuit to be effective if I have a distance of 20 meters ? Can I separate the IR LED from the receiver section ? Yes Sir.

How can we practically increase the distance coverage of this circuit ?

I am getting no answers to my questions.I have noticed resister 330 ohm among components list .It does not show on the schematic.kindly clarify this.How do you approve questions ?Thank you Dir.

Follow the circuit diagram for making connections and selecting component values. I am not sure where you spotted a 330 ohm resistor only a 220 resistor is used for speaker.

Hello, I copied your circuit

Hello, I copied your circuit but my problem is that buzzer keeps on beeping. Can anyone help me?