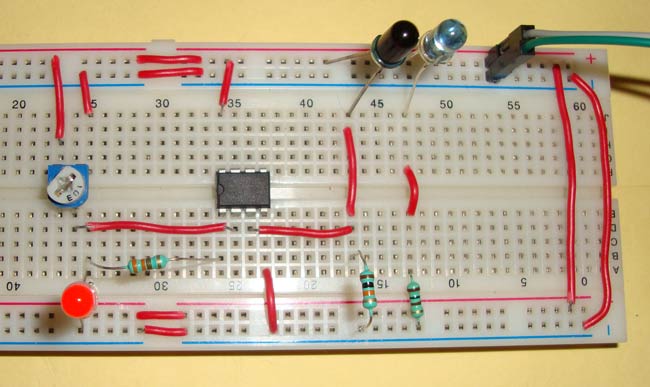 Sensors are very important part of electronics, especially in Robotics and Automations. Sensors in electronic devices make our life easy by automatically sense and control the devices, without human interaction. There are many kinds of sensors like Fire sensor, humidity sensor, motion sensor, temperature sensor, IR sensor etc. In this article, we will explain about IR sensor (Infrared sensor), how it works and how to build an IR sensor Module.

IR sensor is very popular sensor, which is used in many applications in electronics, like it is used in Remote control system, motion detector, Product counter, Line follower Robots, Alarms etc.

IR sensor basically consist an IR LED and a Photodiode, this pair is generally called IR pair or Photo coupler. IR sensor work on the principal in which IR LED emits IR radiation and Photodiode sense that IR radiation. Photodiode resistance changes according to the amount of IR radiation falling on it, hence the voltage drop across it also changes and by using the voltage comparator (like LM358) we can sense the voltage change and generate the output accordingly.

The placing of IR LED and Photodiode can be done in two ways: Direct and Indirect. In Direct incidence, IR LED and photodiode are kept in front of one another, so that IR radiation can directly falls on photodiode. If we place any object between them, then it stops the falling of IR light on photodiode.

And in Indirect Incidence, both the IR LED and Photo diode are placed in parallel (side by side), facing both in same direction. In that fashion, when a object is kept in front of IR pair, the IR light gets reflected by the object and gets absorbed by photodiode. Note that object shouldn’t be black as it will absorb all the IR light, instead of reflect. Generally IR pair is placed in this fashion in IR sensor Module. 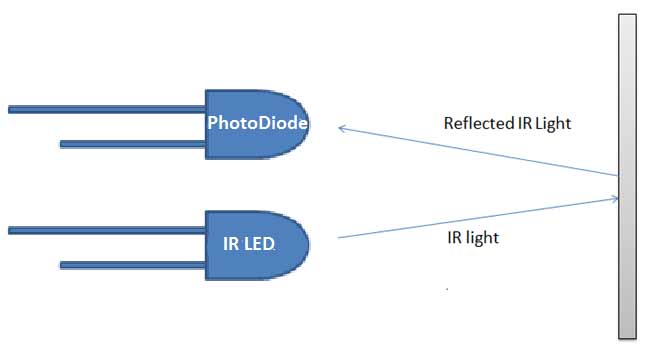 To build an IR module, we mainly need IR pair (IR LED and Photodiode) and LM358 with some resistors and a LED.

IR LED emits light, in the range of Infrared frequency. IR light is invisible to us as its wavelength (700nm – 1mm) is much higher than the visible light range. Everything which produce heat, emits infrared like for example our human body. Infrared have the same properties as visible light, like it can be focused, reflected and polarised like visible light.

Photodiode is considered as Light dependent Resistor (LDR), means it has very High resistance in absence of light and become low when light falls on it. Photodiode is a semiconductor which has a P-N junction, operated in Reverse Bias, means it start conducting the current in reverse direction when Light falls on it, and the amount of current flow is proportional to the amount of Light. This property makes it useful for IR detection. 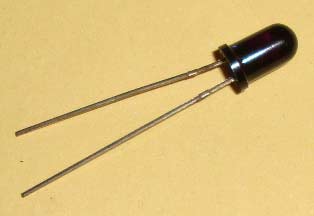 Photodiode looks like a LED, with a Black colour coating on its outer side. It is used in reversed biased, as showed in circuit diagram below.

When we turn ON the circuit there is no IR radiation towards photodiode and the Output of the comparator is LOW. When we take some object (not black) in front of IR pair, then IR emitted by IR LED is reflected by the object and absorbed by the photodiode. Now when reflected IR Falls on Photodiode, the voltage across photodiode drops, and the voltage across series resistor R2 increases. When the voltage at Resistor R2 (which is connected to the non-inverting end of comparator) gets higher than the voltage at inverting end, then the output becomes HIGH and LED turns ON.

This whole circuit can be placed on PCB to build a proper professional IR sensor Module.

waow ..this is good information about IR . I have been searching for something like this

Hello. What is the best material to use as a reflector? Could a normal marble be used for example?

plz..tell me what should be the setting value for variable resistor in this circuit....
plz help me in this
l

You can adjust it according

You can adjust it according to the sensitivity you need. Sensitivity means, from how far it should detect the object.

I tried making one but it

I tried making one but it wasn't working. At certain value of my potentiometer, the LED output is HIGH and becomes LOW when detects an obstacle. What could be the problem? I used all components just similar to yours. Thank you.

I tried making one but it wasn't working. At certain value of my potentiometer, the LED output is HIGH and becomes LOW when detects an obstacle. What could be the problem? I used all components just similar to yours. Thank you.

You should check it inside

You should check it inside the room where direct sunlight doesn't fall. There are IR radiations already in sunlight ( and in wi fi router etc). So keep an eye on it.

FINALLY I SUCCESSFULLY ASSEMBLED THE PROJECT

FINALLY I SUCCESSFULLY ASSEMBLED THE PROJECT

THANKS A LOT ALL OF YOU AND YOUR FAMILY

Thanks alot... It help us

can this be used in arduino

thank you for the circuit and design part.

what is the function 330ohm resistor here

Its just a current limiting

Its just a current limiting resistor for LED.

I am currently living in the Philippines and wantedto do a laser tag set up for the neighbor kids. I have a basic knowledge of electronics but do not know how to form the necessary circuitry to both send ir and detect ir to make the plastic guns work. Can you point the way? No need to reinvent the wheel if someone has done this already.

This circuit working well but distace of reflection still short, help me to get solution that can make distace of IR LED can longer and reflect more far of distance (ex: 1 meter). I need your help, I wait your reply by email.Thx.

is that output pin connected

is that output pin connected to arduino's digital pin?

Hi,
I really do appreciate your job!!!
you helped me a lot! Thanks

Hey there,
I think that this sensor has a limited sensibility, am i right?
if yes how can i increase it?

What do you mean by

What do you mean by sensibility here?

If you are talking about the range, then sorry nothing much can be done to improve it.

Your circuit is superb . But it detection range is small. How I increase it's range. I mean how I make long range IR module circuit ? Please say.
I am waiting for your email .

what is distance can measred

Why earth this system

Could you please explain me what is the need of ground this circuit.

Its not just this circuit, every circuit will need a ground. As we know current always flows from positive to negative, this negative potential is usually referred as ground.

V output when high is equal to Vf LED ~2V
to send signal to arduino input pin, should take from pin 1 on LM358 where high will be 5V.

How Can I add Reset Button !

Hi,
this is superb circuit diagram, but i want to modify it when there is a obstructed the LED goes ON and it goes to OFF only when a reset button is pressed. could you please help me to giving the reference.

is there any other ic or any

Hello Jayant,
That seems great work !!
i have made it and can work as shown in video :)
BTW, how can i increase the distance from object to IR photo diode (about 30 cm).?

how to set off time even an

how to set off time even an oscillate in front of the sensor ?

can IR be reflected by paper

can IR be reflected by paper like and envelope? I am trying to install this inside my mailbox to detect if there is a mail inside

Yes IR will reflect paper and

Yes IR will reflect paper and envelop. You can use it for your idea

is the IR led a transmiiter or receiver?

the IR LED can act only as a

the IR LED can act only as a transmitter

Hi,
I actually don't understand how the current would flow in the circuit of the IR module using LM358 voltage comparator. It would be very kind and helpful of you if you could tell me the current flow and what is the reason of current flow in one direction and not the other.

I get a bit confused in parallel circuits.

Very good in detail and well illustrated Jayant. Couldn't have asked for more. Look forward to more of your articles.