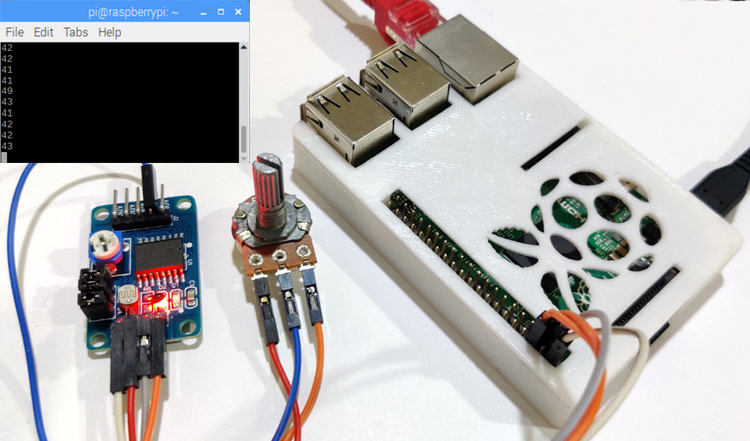 Analog to digital conversion is a very important task in embedded electronics, as most of the sensors provide output as analog values and to feed them into microcontroller which only understand binary values, we have to convert them into Digital values. So to be able to process the analog data, microcontrollers need Analog to Digital Converter.

Some microcontroller has inbuilt ADC like Arduino, MSP430, PIC16F877A but some microcontroller don’t have it like 8051, Raspberry Pi etc and we have to use some external Analog to digital converter ICs like ADC0804, ADC0808. Below you can find various examples of ADC with different microcontrollers:

In this tutorial, we are going to learn how to interface PCF8591 ADC/DAC module with Raspberry Pi.

It is assumed you have Raspberry Pi with latest Raspbian OS installed in it and you know how to SSH into the Pi using a terminal software like putty. If you are new to Raspberry Pi then follow this article to get started with Raspberry Pi. Still if you face any issue then there are tons of Raspberry Pi Tutorials  that can help.

PCF8591 is an 8 bit analog to digital or 8 bit digital to analog converter module meaning each pin can read analog values up to 256. It also has LDR and thermistor circuit provided on the board. This module has four analog input and one analog output. It works on I2C communication, so there are SCL and SDA pins for serial clock and serial data address. It requires 2.5-6V supply voltage and have low stand-by current. We can also manipulate the input voltage by adjusting the knob of potentiometer on the module. There are also three jumpers on the board. J4 is connected to select the thermistor access circuit, J5 is connected to select the LDR/photo resistor access circuit and J6 is connected to select the adjustable voltage access circuit. There are two LEDs on board D1 and D2- D1 shows the output voltage intensity and D2 shows the intensity of supply voltage. Higher the output or supply voltage, higher the intensity of LED D1 or D2. You can also test these LEDs by using a potentiometer on VCC or on AOUT pin. 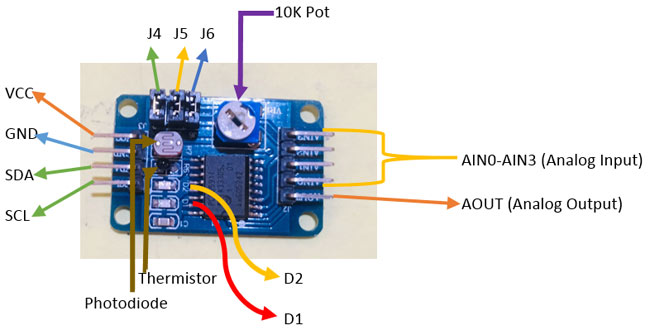 Below is the Pin Diagram of Raspberry Pi 3 Model B+, and I2C pins GPIO2 (SDA) and GPIO3 (SCL) are used in this tutorial.

1. Go to the terminal and type sudo raspi-config.

3. Select Interfacing options and then enable the I2C. 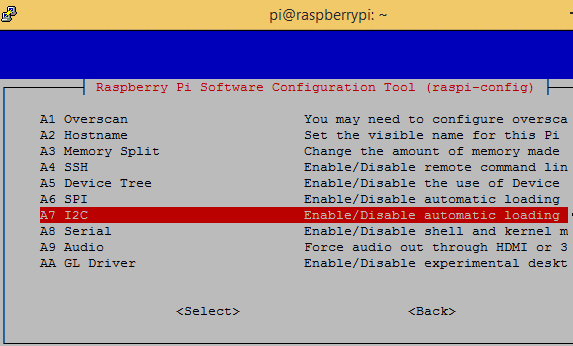 4. After enabling the I2C reboot the Pi.

Now open the terminal and type below command to know the address of connected I2C device,

After finding the I2C address now its time to build the circuit and install the necessary libraries for using PCF8591 with Raspberry Pi.

Circuit diagram for Interfacing of PCF8591 with Raspberry Pi is simple. In this interfacing example, we will read the analog values from any of the analog pins and show it on Raspberry Pi terminal. We can change the values using a 100K pot. 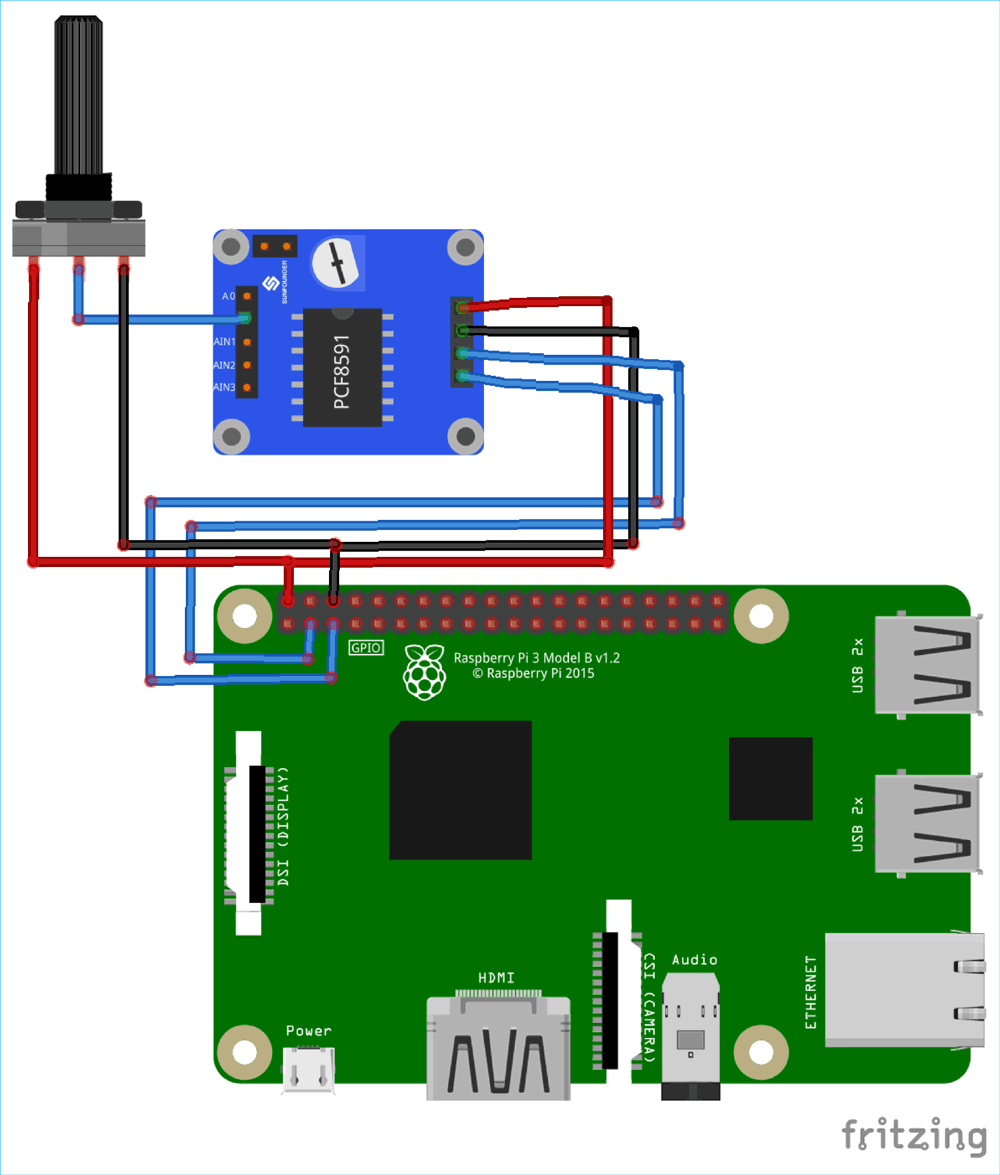 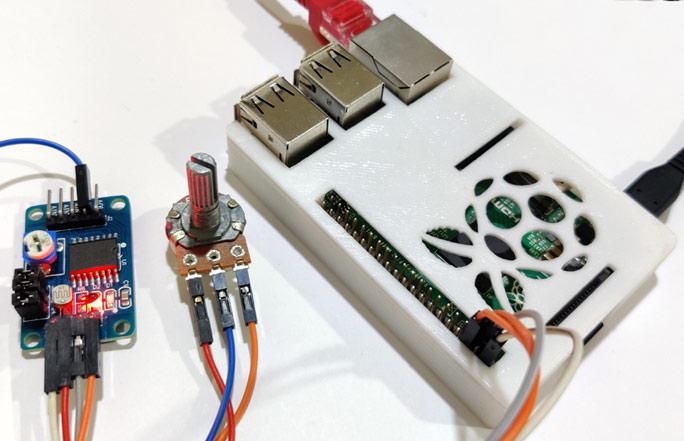 Connect the VCC and GND to GPIO2 and GPIO of Raspberry Pi. Next, connect the SDA and SCL to GPIO3 and GPIO5 of respectively. Finally connect a 100K pot with AIN0. You can also add 16x2 LCD to display ADC values instead of showing it on Terminal. Learn more about interfacing 16x2 LCD with Raspberry Pi here.

The complete program and working video is given at the end of this tutorial.

Firstly, import the smbus library for I2C bus communication and time library to give a sleep time between printing the value.

Next, we’ve made an object of the function SMBus(1) of library smbus

Now, in while the first line tells the IC to make the analog measurement at the first analog input pin. The second line stores the address read at analog pin in a variable value. Finally print the value.

Now finally save the python code in some file with .py entension and run the code in raspberry Pi terminal by using below command”

Before running the code ensure that you have enabled the I2C communication and all the pins are connected as shown in the diagram, otherwise it will show errors. The analog values must start showing up on terminal like below. Adjust the pot’s knob, and you will see the gradual change in the values. Learn more about running the program in 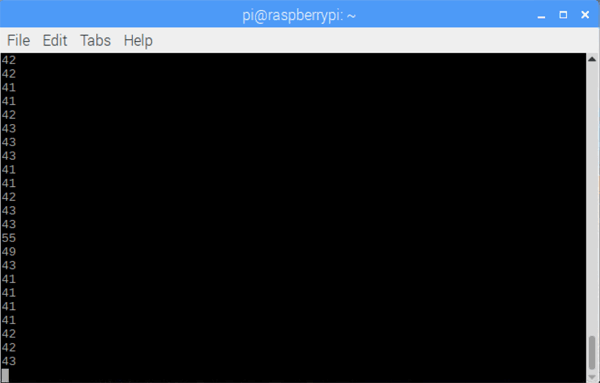 Complete python code and Video is given below.