Making wireless projects in embedded electronics becomes very important and helpful as there are no jumbled wires all over which makes the device more handy and portable. There are various wireless technologies such as Bluetooth, WiFi, 433 MHz RF (Radio Frequency) etc. Every technology has its own advantages and disadvantages such as cost, distance or range transfer, speed or throughput etc. Today we will use RF module with STM32 to send and receive the data wirelessly. If you are new to STM32 Microcontroller then start with Blinking LED with STM32 using Arduino IDE and check all other STM32 projects here.

Apart from this, we have also used RF 433Mhz Wireless Module with other microcontrollers to build some wireless controlled projects, such as:

In this tutorial, RF Transmitter sends two values to Receiver side: the distance measured using ultrasonic sensor and the potentiometer ADC value (0 to 4096) which is mapped as number from (0 to 100). The RF receiver of Arduino receives both the values and prints those distance and number values in 16x2 LCD display wirelessly. 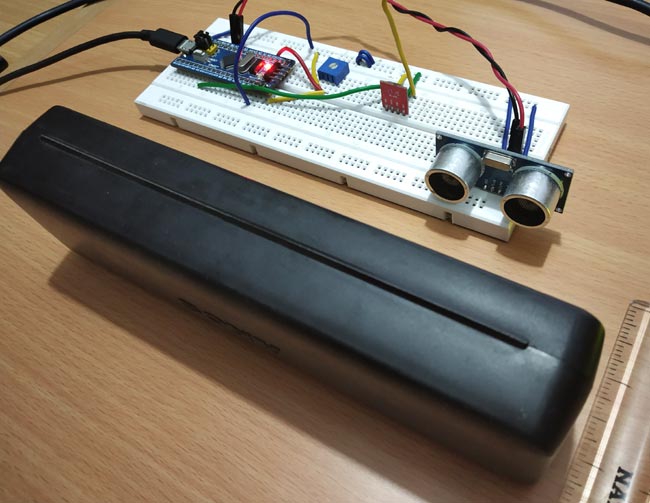 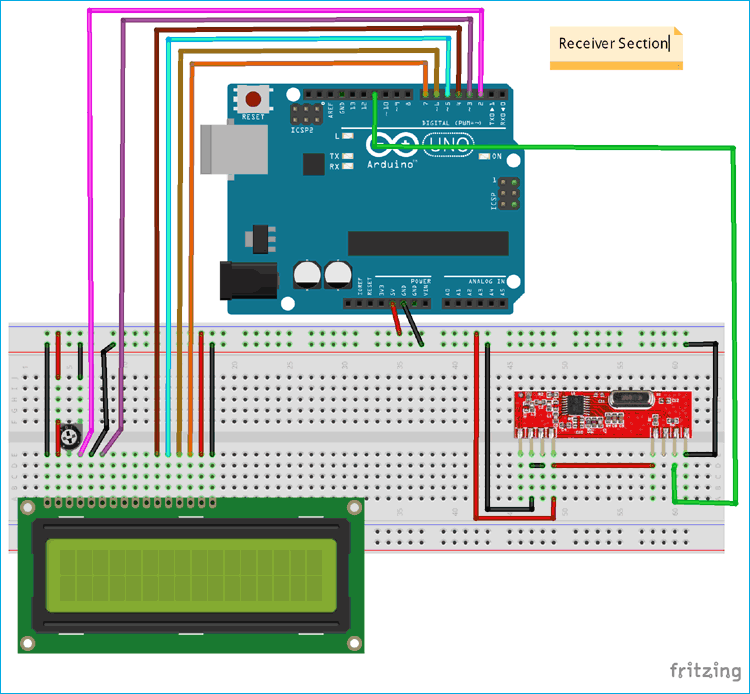 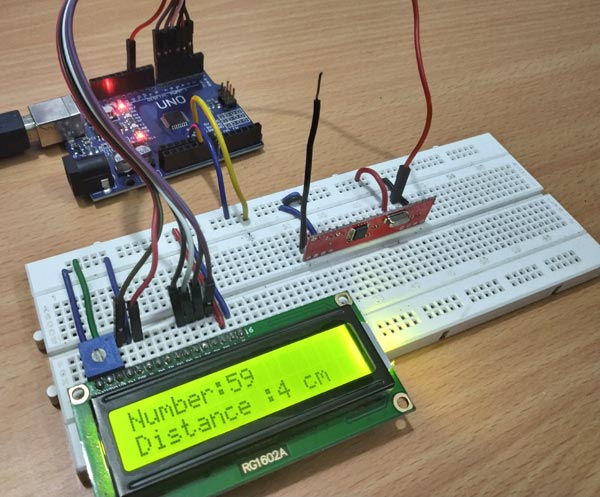 The coding will be explained in brief below. There will be two parts of the sketch where first part will be transmitter section and another will be receiver section. All sketch files and working video will be given at the end of this tutorial. To learn more about interfacing RF module with Arduino Uno, follow the link.

STM32F103C8 can be programmed using Arduino IDE. A FTDI programmer or ST-Link is not needed to upload the code to STM32F103C8. Simply connect to PC via USB port of STM32 and start programming with ARDUINO IDE. You can learn Programming your STM32 in Arduino IDE by following the link.

In the transmitter section the distance of the object in ‘cm’ is measured using ultrasonic sensor and the number value from (0 to 100) set using potentiometer which is transmitted via RF transmitter interfaced with STM32.

First the Radiohead library is included, it can be downloaded from here. As this library uses the ASK (Amplitude Shift Keying Technique) to transmit and receive data. This makes the programming very easy. You can include library in sketch by going into  Sketch->include library->Add .zip library.

As in this tutorial in the transmitter side an ultrasonic sensor is used to measure the distance so the trigger and echo pins are defined.

Next the Strings variable needed in this program are declared.

Next in the void setup(), the object for RH_ASK rf_driver is initialized.

After that the trigger pin is set as OUTPUT pin and the PA0 (connected to potentiometer) and echo pin is set as INPUT pin. Serial communication is begin at baud rate of 9600.

Next in the void loop(), frst the potentiometer value that is the input Analog voltage is converted into digital value (ADC value is found). As the ADC of STM32 has 12-bit resolution. So, the digital value varies from (0 to 4096) which is mapped into (0 to 100).

Next the distance is measured using ultrasonic sensor by setting the trigger high and low with a delay of 2 microseconds.

The echo pin senses the reflected wave back, that is the time duration that triggered wave is reflected back is used in calculating the distance of object using the formula. Learn more how ultrasonic sensor calculates distance, by following the link.

Now both the data number and distance measured is converted into string data and stored in respective string variables.

Both the string is added as one line and stored in string called transmit and comma “,” is used to separate two strings.

The transmit string is converted into character array.

The data is transmitted and wait till it is sent.

The string data sent is also displayed in the Serial Monitor.

Arduino UNO is programmed using the Arduino IDE. In the receiver section the data that is transmitted from the transmitter section and received by the RF receiver module and the string data received is split into respective data (distance and number) and displayed in the 16x2 LCD display.

Like in the transmitter section first the RadiohHead library is included. As this library uses the ASK (Amplitude Shift Keying Technique) to transmit and receive data. This makes the programming very easy.

As LCD display is used here so the liquidcrystal library is also included.

And the 16x2 LCD display pins connected with Arduino UNO are specified and declared using lcd as object.

Next the String data variables to store string data are declared.

The object for the Radiohead library is declared.

Now in the void setup(), The LCD display is set in 16x2 mode and a welcome message is displayed and cleared.

After that, the rf object is initialized.

Now in the void loop(), the Array buf[] is declared with size as 7. As the data sent from transmitter has 7 including the “,”. So, change this according to the data that is to be transmitted.

If the string is available at the rf receiver module the if function checks the size and it executes. The rf.recv() is used to receive data.

This for loop is used to split the received string into two if it detects the ‘,’ in-between two strings.

Two char arrays for two values are declared and the String that is split into two is stored in respected array by converting string into character array.

After that convert the character array into integer using atoi()

After uploading both the codes i.e. transmitter and receiver in the STM32 and Arduino UNO respectively, the data such as number and object distance measured using the STM32 is transmitted to the RF receiver via RF Transmitter and the values received are displayed in the LCD display wirelessly.

1. When number at 0 and the distance of object is at 6cm. 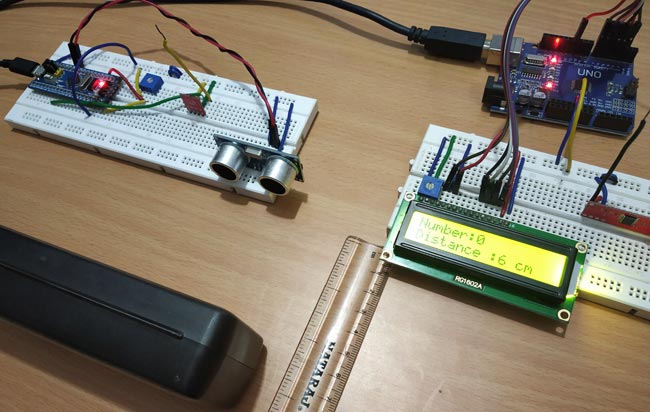 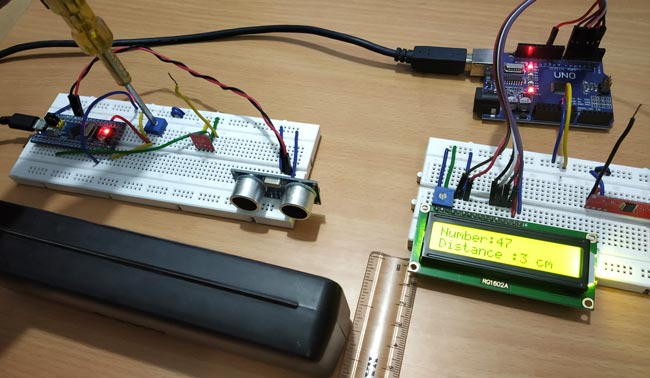