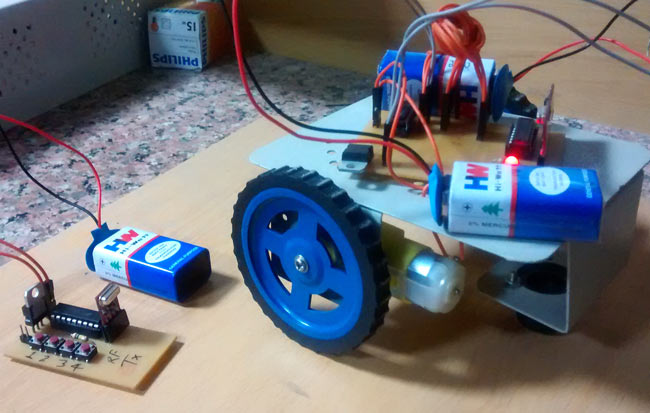 In present time almost all the people are familiar with robots. Robots play a very important role in human life. Robots are a machine which reduces the human efforts in heavy works in industries, building etc. and makes life easy. In Our previous Projects we have made some robots like line follower, DTMF controlled robot, gesture controlled robot, computer controlled robot, but in this tutorial we are going to design a very interesting robot, that is RF controlled Robot. Interesting thing in this project is that it will run without using any microcontroller. Here we will run it directly by RF Decoder and Motor Driver. 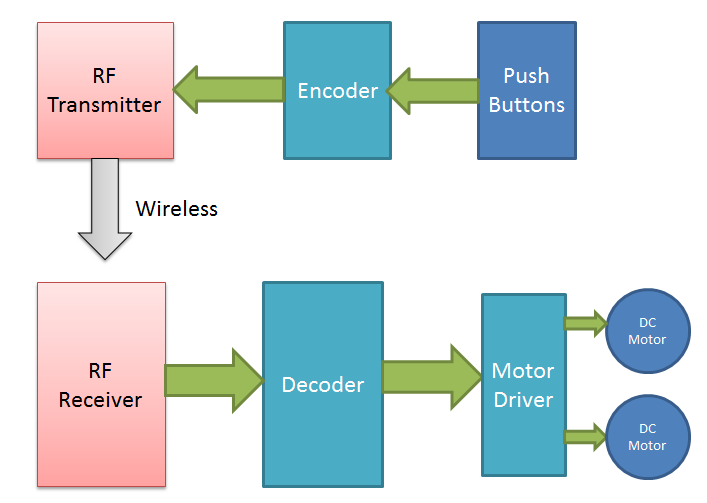 RF controlled robot is controlled by using Four push button placed at transmitter side. Here we only need to push the buttons to control the robot. A transmitting device is used in your hand which also contains a RF Transmitter and a RF Encoder. This transmitter part will transmit command to robot so that it can do the required task like moving forward, reverse, turning left, turning right and stop. All these tasks will perform by using four push buttons that are placed on RF transmitter.

L293D is a motor driver IC which has two channels for driving two motors. L293D has Two inbuilt Transistor Darlington pair for current amplification and an separate power supply pin for giving external supply for motors. 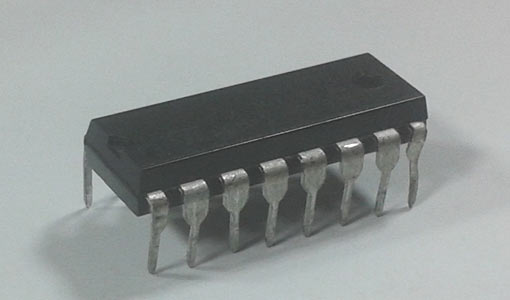 This is a ASK Hybrid Transmitter and receiver module operates at 433Mhz frequency. This module has a crystal stabilized oscillator for maintain accurate frequency control for best range. There we have to need only one antenna externally for this module.

This Module is very cost efficient where long range RF communication is required. This module does not send data using UART communication of PC or microcontroller directly because there is lots of noise at this frequency and its Analog technology. We can use this module with the help of encoder and decoder ICs which extract data from the noise.

In transmitter part a data Encoder and a RF transmitter is used. As we have already mentioned above that we are using four push buttons to run the robot, these four buttons are connected with Encoder with respect to ground. When we will press any button encoder will get a digital LOW signal and then applied this signal serially to RF transmitter. The Encoder IC HT12E encodes data or signal or converting it into serial form and then sends this signal by using RF transmitter into the environment. 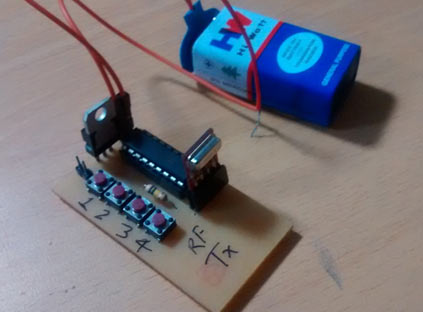 At the receiver end we have used RF receiver to receive data or signal and then applied to HT12D decoder. This decoder IC converts the received serial data to parallel and then send these decoded signal to L293D Motor driver IC. According to the received data robot runs by using two dc motor in forward, reverse, left, right and stop direction. 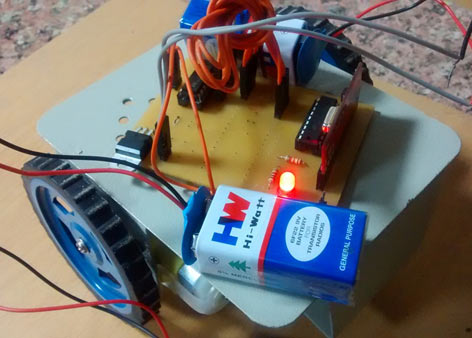 RF controlled robot move according to button pressed at Transmitter.

When we press first button (1 mention on circuit and hardware) robot start to moving left side and moving continues until the button is released. 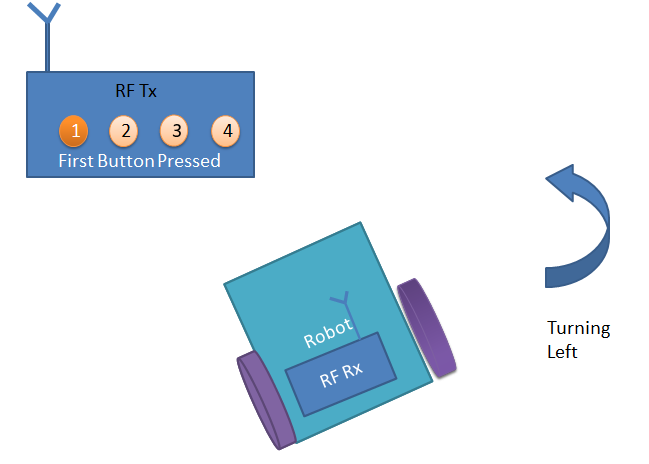 When we press second button at transmitter, robot start moving in right side until button is released. 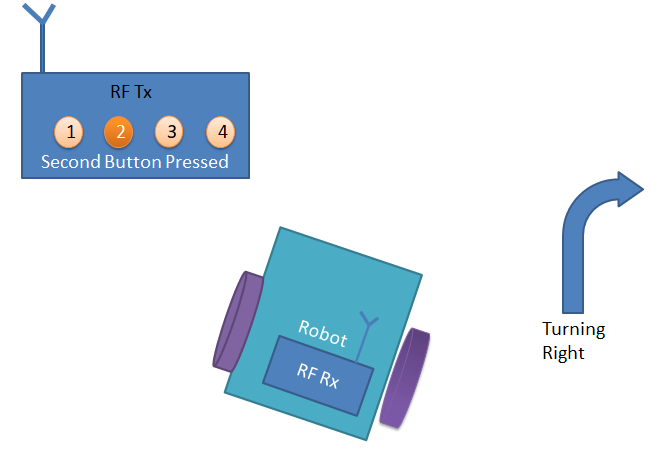 When we press first and second button at the same time, Robot start moving in forward direction until push buttons are released. 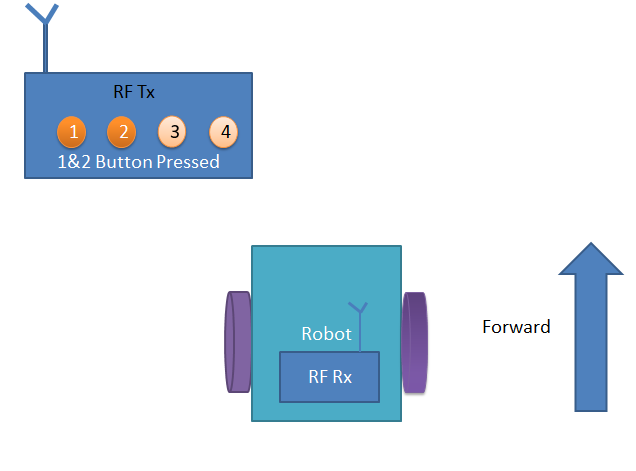 When we press third and fourth button at the same time, robot start moving in backward direction and keep going until push buttons are released. 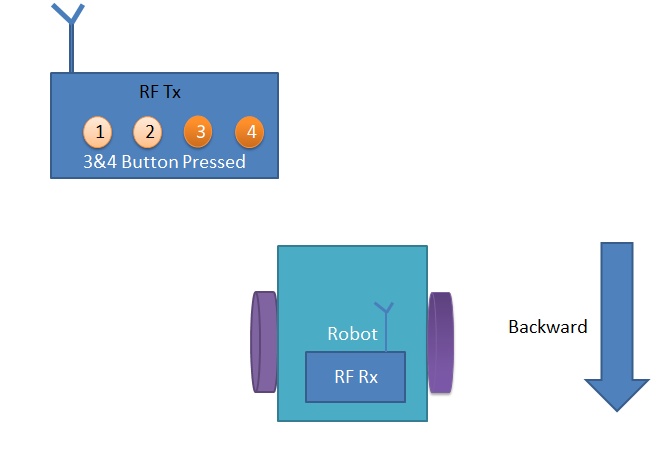 And when no push Button is pressed, robot stops. 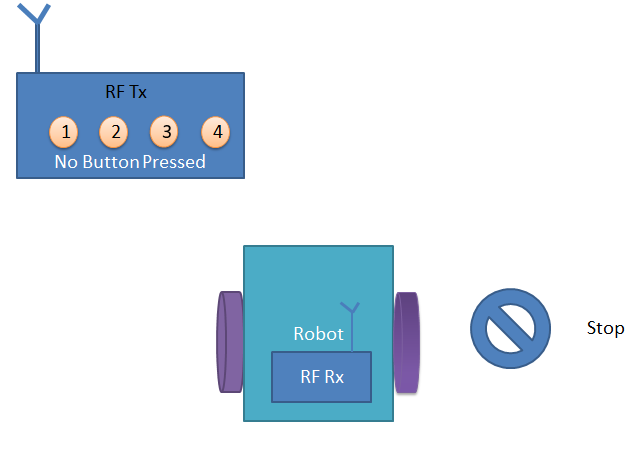 how to connect push buttons to encoder?

You can check the Circuit

You can check the Circuit Diagram for RF Transmitter above and connect RF Tx module to HT12E along with Push buttons. You can assemble the whole Transmitter circuit on PCB. Check here for making PCB

This is a RF Robot without

I have made this one and it worked perfect but there is a problem, if try to used any other power source other than 9v battery, motor on switch s4.2 and s4.3 starts misbehaving such as after leaving the switch it keeps on running, so i have to turn off the power and on again.
Any suggestions ??

What power source are you

What power source are you using? Also check you circuit connections.

M1 and M2 are the two DC motors to rotate the wheels of Robot.

Can any advancement done in

Can any advancement done in this circuit ??
If so what kind ?

sir ,i need the pcb layout

sir ,i need the pcb layout of TXR section,will u plz help me

There are so many softwares

There are so many softwares are available for Schematic to PCB layout conversion like Easy EDA, Fritzing etc.

My ckt is not working.
What kind of motors are that
Is it dc brush motors

They are DC motors, we have

They are DC motors, we have used L293D for motor Driver Circuit many times. please check this link and learn: http://circuitdigest.com/search/node/l293d%20driver

i have four pin receiver.how

i have four pin receiver.how to connect. can u upload the schematic for 4 pin

With 3-pin RF transmitter and

With 3-pin RF transmitter and receiver modules, you don't need to connect Encoder & decoder and circuit will be changed accordingly. Check this Article https://www(dot)elprocus(dot)com/rf-module-transmitter-receiver/ for understand the connections.

what are the main applications of rf based remote controlled car?

can i use other antena insted of other wire

we are making this project using 4 wheels,my question is will the above circuit diagram is valid for 4 wheels project..coz its our final year project?? hope u reply soon

Yes you can connect 4 DC

Yes you can connect 4 DC motors to L293D, but then you need more power to drive all the motors. Check this Robot where we have used 4 motors with powerfully battery: DIY Smart Vacuum Cleaning Robot using Arduino

Do the resistors in the receiver circuit limit the amount of current going to the motors. Are the motors getting the full 9 volts of the battery because your car seems quite slow for that amount of voltage.
Please Reply.

No, resistors are not for

No, resistors are not for limiting the current to the Motors. Even we have used Motor Driver IC L293D to drive more current, you can further use more powerful battery (or fresh 9v Batteries) according to the motors.

It is not exactly the robot ,

It is not exactly the robot , it is an radio controled car. To be a robot have to install the firmware...

Where to buy these all

Where to buy these all components

Sirs, my circuit is not working. LED is off initially, and when the receiver is supplied, the motors don't run. What to do? Is there any software for simulation?

sir what are applications of this rf controlled robots. I have got a project to do a robot which contains LDR, PIR, LM35, IR along with what you used above. Is that possible. Please do reply.

i want to prepare a helicopter by rf control with High power,

Can i use this instead of the robot...
.. and how to increase the range.... rply me soon

i want the program for controlling the dc motors using two switches for moving forward and backward by using rf module to pic16f877a.

What is the range of the rf module that you have used. I all want it be be obstacle avoiding robot. How can i convert it into that.

Better use Ultrasonic or IR

Better use Ultrasonic or IR sensor for obstacle avoiding robot, search on this website for these robots

This article only shows on

This article only shows on how to make RF controlled robot without microcontroller. However, We guys tried to make a Wireless Robot Control Using RF Module where this project aims of a similar wireless remote controlling applicable to two-wheel drive robots. The wireless remote is a 434 RF module and the robot is driven on DC motors controlled by an L293D motor driver IC. Typically, 434 RF modules have a range of 50-60 metre but can be extended up to 300-350 metre. So, after extending the operational range of RF module, the RC robot will have an impressive distance to wander around. Learn more about extending the operational range of RF modules here []

I have made the same but

I have made the same but after leaving the switch it remains turn on.
I have not connected 293. First I am checking only for signal receiving... but signal remains turn on

Hello,
How can I connect four motors if I want to use it with PWM circuit for a quadcopter control?
Pls am waiting!

Wow..i love this rc circuit. Have been looking for this type of circuit that is quite simple for me as a beginner in electronics..

whats the specification of dc motors

Plz any body tell what is

These are simple 5v DC motors

These are simple 5v DC motors.

Very simple and nice circuit. I done it and it working properly.

hello sir i am a diploma 2nd year student , i have reciber and tranmitter and motor driver.
but i dont conectin of motor driver with reciver. plese help me.

Sir where is the 33k resistor

Sir where is the 33k resistor connected to??

sir,we dnt need any program codings & any programs so please give me a link....

sir I arranged the circuit

sir I arranged the circuit step by step on bread board but It doesn't working.. I don't l know where fault is?? shall you help me where frequently faults happen??

My ckt led not working what i

I am doing this project but I how to increase the range of this project more than 1000 meter,..plz give me replay!!!

What should be connected in place of antenna

hi. I would like to ask if, instead of using dc motor can i used geared motors???

DC (direct current) is the

DC (direct current) is the electrical input to the motor. Gearing only adjusts the output speed and is not directly related to the type of power source.