In simple terms, the oscillator is a circuit which converts DC power from the supply source to the AC power to the Load. Oscillator system is built using both active and passive components and it is used for the production of sinusoidal or any other repetitive waveforms at the output without any application of an external input signal. We discussed few oscillators in our previous tutorials:

Any kind of radio-TV transmitter or receiver or any laboratory test equipment has the oscillator. It is the main component for producing the clock signal. A simple oscillator application can be seen inside a very common device such as a watch. Watches use an oscillator to produce a 1 Hz clock signal.

Other than the oscillator classifications based on the output signal, Oscillators can be classified using the circuit construction like negative Resistance oscillator, feedback oscillator etc.

Hartley oscillator is an LC oscillator. An LC oscillator consists of a tank circuit which is an essential part to produce the required oscillation. The tank circuit is using three components, two inductors, and a capacitor. The capacitor is connected in parallel with two series inductors. Below is the circuit diagram of Harley Oscillator: 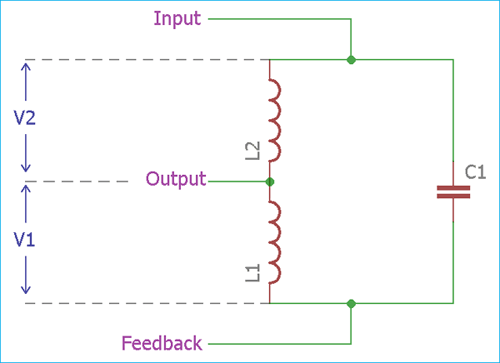 Why the inductor-capacitor combination is called as the tank circuit? Because the LC circuit stores the frequency of the oscillation. In the tank circuit, capacitor and two series inductors are being charged and discharged by each other repetitively which produce an oscillation. The charge and discharge timing or in other words, the value of capacitor and inductors is the main determining factor for the oscillation frequency. 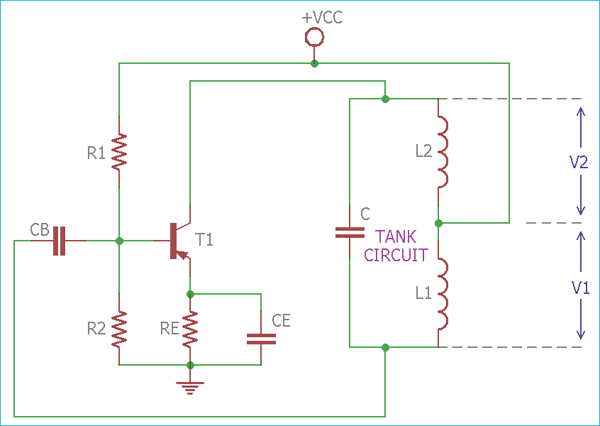 In the above image, a practical Hartley oscillator circuit is shown where an active component is PNP transistor. In the circuit, the output voltage appears across the tank circuit which is connected to the collector. However, the feedback voltage is also a part of the output voltage which is denoted as V1, appearing across the Inductor L1.

The frequency is directly proportional to the ratio of capacitor and inductors values.

The active component in Hartley Oscillator is the transistor. The DC operating point in the active region of the characteristics is governed by the resistors R1, R2, RE, and the collector supply voltage VCC. The capacitor CB is the blocking capacitor and CE is Easter bypass capacitor.

The total inductance of the tank circuit is LT = L1 + L2 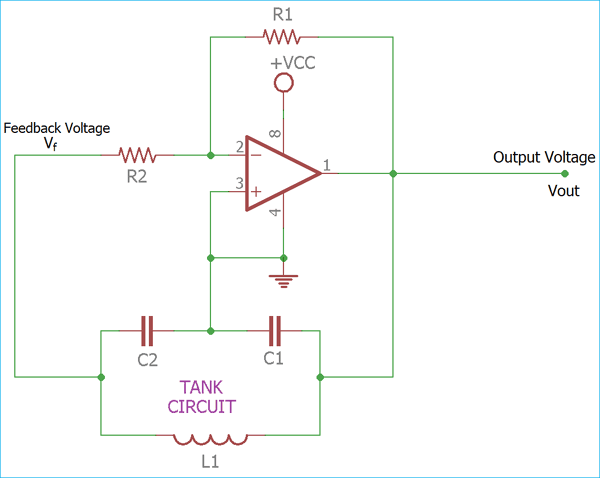 In the above image, the op-amp based Hartley oscillator has been shown where capacitor C1 is connected in parallel with L1 and L2 in series.

The Op-amp is connected in an inverting configuration, where the resistor R1 and R2 is the feedback resistor. The amplifier voltage gain can be determined by the below-mentioned formula –

The feedback voltage and the output voltage is also denoted in the above op-amp based Hartley oscillator circuit.

The frequency of the Oscillation can be calculated using the same formula which is used in transistor based Hartley oscillator section.

Hartley oscillator usually oscillates in the RF range. The frequency can be varied by altering the value of inductor or capacitors or both. For the selection of a variable component, capacitors are chosen above the inductors as they can be easily varied than inductors. The frequency of the oscillation can be changed in the ratio of 3:1 for smooth variations.

Suppose a Hartley oscillator with a variable frequency of 60-120 KHz consist of a trimmer capacitor (100 pF to 400 pF). The tank circuit has two inductors where the value of one inductor is 39uH. So to find the value of other inductor, we will follow the below procedure:

The frequency of Hartley oscillator is-

In this situation where the frequency varies between 60 to 120 kHz which is a 1:2 ratio. The variation of the frequency can be obtained by a pair of coils since the capacitance varies in the ratio of 100pF: 400 pF which is a 1:4 ratio.

So, the total capacitance is 17.6 mH and the value of other Inductor is 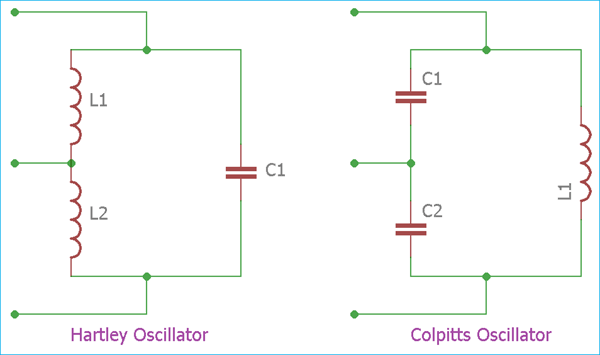 Advantages and Disadvantages of Hartley Oscillator

1.The Output amplitude is not proportional with the variable frequency range and the amplitude remains near constant.

2.Frequency is easily controllable using a trimmer instead of the fixed capacitor in the tank circuit.

1.Hartley Oscillator provides a distorted sine wave and not suitable for pure sine wave related operations. The main reason for this drawback is the high amount of harmonics induced across the output.