The diode D1 has a reverse conducting property based on the forward conduction of diode D2. When a current flows through the diode D2 from emitter to base, the diode D1 senses the current and a proportional current will be allowed to flow in the reverse direction from emitter terminal to collector terminal provided ground potential is applied at the collector terminal. The proportional constant is the Gain (β).

When a negative potential VBE is applied across Base-Emitter junction decreasing from 0V, the electrons and holes start to accumulate at the depletion region. When the potential further decreases below 0.7V, the barrier voltage is reached and the diffusion occurs. Hence, the electrons flow towards the positive terminal and the base current flows (IB) is opposite to the electron flow. Besides, the current from emitter to collector starts to flow, provided the voltage VCE is applied at collector terminal. The PNP transistor can act as a switch and an amplifier.

Operating region versus Mode of operation:

The application of an PNP transistor is to work as a high side switch. To explain with a PSPICE model, PN2907A transistor has been selected. The first important thing to bear in mind to use a current limiting resistor at base. Higher base currents will damage a BJT. From the datasheet the maximum continuous collector current is -600mA and corresponding gain(hFE or β) is given in datasheet as test condition. The corresponding saturation voltages and base currents are also available.

1. Find the collector current wiz the current consumed by your load. In this case it will be 200mA (Parallel LEDs or loads) and resistor = 60 Ohms.

For complete saturation the base current is approximated to 2.5mA (Not too high or too low). Thus below is the circuit with 12V to base same as that to emitter with respect to ground during which the switch is OFF state. 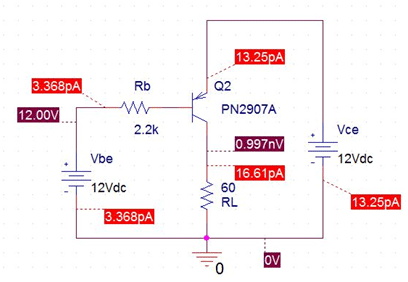 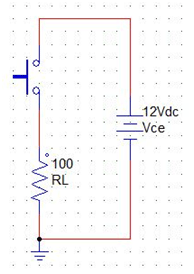 Theoretically the switch is completely open but practically a leakage current flow can be observed. This current is negligible since they are in pA or nA.For better understanding on current control, a transistor can be considered as a variable resistor across collector(C) and emitter(E) whose resistance varies based on the current through the base(B). 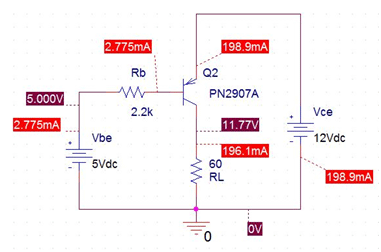 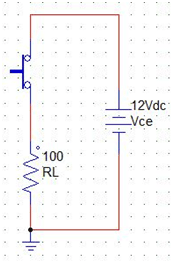 Now let us see how to control the output current by controlling the base current. Fix IC= 100mA in spite of load being 200mA, the corresponding gain from datasheet is somewhere between 100 & 300 and following the same formula above we get

The variation of practical value from calculated value is because of the voltage drop across transistor and the resistive load that is used. Also, we have used a standard resistor value of 13kOhm instead of 12.5kOhm at base terminal. 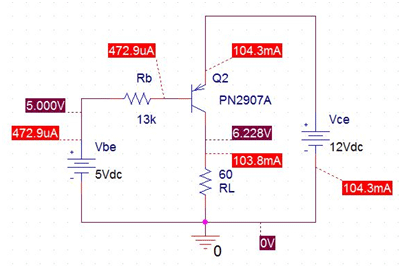 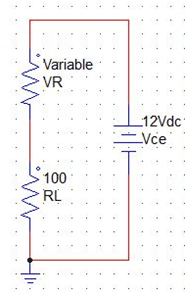 Amplification is the converting a weak signal into usable form. The process of amplification has been an important step in many applications like wireless transmitted signals, wireless received signals, Mp3 players, mobile phones, and etc., The transistor can amplify power, voltage and current at different configurations.

Some of the configurations used in transistor amplifier circuits are

Of the above types common emitter type is the popular and mostly used configuration. The operation occurs in active region, Single stage common emitter amplifier circuit is an example for it. A stable DC bias point and a stable AC gain are important in designing an amplifier. The name single stage amplifier when only one transistor is being used. 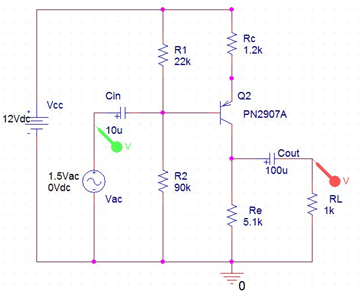 Above is single stage amplifier where a weak signal applied at base terminal is converted into β times the actual signal at collector terminal.

In case of PNP transistor, the word common indicates the negative supply. Hence, emitter will be negative when compared with collector. The circuit operates instantaneously for each time interval. Simply to understand, when the ac voltage at base terminal increases the corresponding increase in current flows through the emitter resistor.

Thus, this increase in emitter current increases the higher collector current to flow through the transistor which decreases the VCE collector emitter drop. Similarly when the input ac voltage reduces exponentially the VCEvoltage starts to increase due to the decrease in emitter current. All these change in voltages reflect instantaneously at the output which will be inverted waveform of the input, but amplified one.

Based on the above table, the corresponding configuration can be utilized.