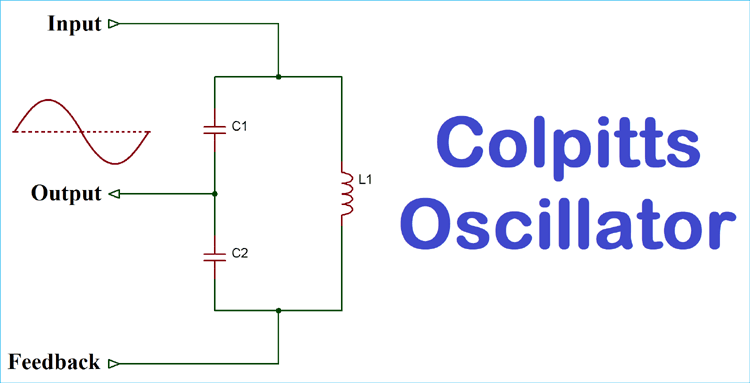 An oscillator is a mechanical or electronic construction which produces oscillation depending on few variables. We all have devices which need oscillators like a traditional clock or a wristwatch. Various types of metal detectors, computers where microcontroller and microprocessors are involved use oscillators, especially electronics oscillator which produces periodic signals. We discussed few oscillators in our previous tutorials: 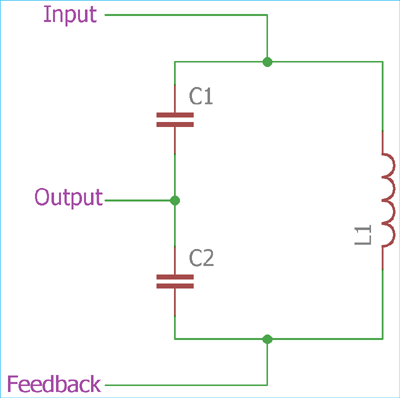 In the above image, three components of the tank circuit are shown with proper connections. The process starts with charging of two capacitors C1 and C2. Then inside the tank circuit, these two series capacitors discharge into the parallel inductor L1 and the stored energy in the capacitor transferred to the inductor. Due to the capacitor connected in parallel, the inductor now discharged by the two capacitors and the capacitors start to charge again. These charging and discharging in both of the components continues and thus providing an oscillation signal across it.

The oscillation is highly depended on the capacitors and the inductor’s value. Below formula is to determine the oscillation frequency:

where F is frequency and L is Inductor, C is the total equivalent capacitance.

The equivalent capacitance of the two capacitors can be determined using 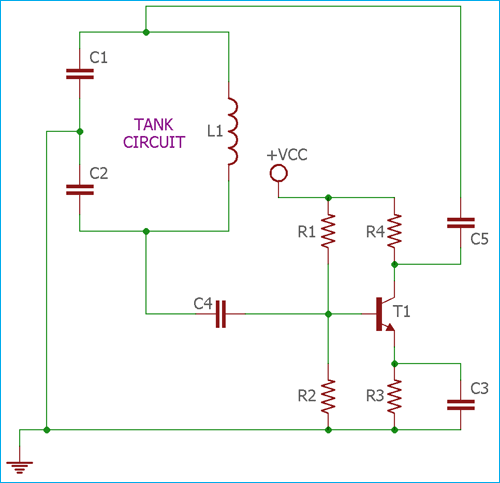 In the above image, the Transistor based Colpitts Oscillator is shown where the main gain device of the oscillator is an NPN transistor T1.

In the circuit, resistor R1 and R2 are required for the base voltage. These two resistors are used to make a voltage divider across Transistor T1’s base. Resistor R3 is used as an emitter resistor. This resistor is very useful to stable the gain device during the thermal drift. The capacitor C3 is used as an emitter bypass capacitor which is connected in parallel with the resistor R3. If we remove this C3 capacitor, the amplified AC signal will be dumped across resistor R3 and results in a poor gain. So, the capacitor C3 is provided an easy path for the amplified signal. The feedback from the tank circuit is further connected using the C4 to the transistor T1's base. 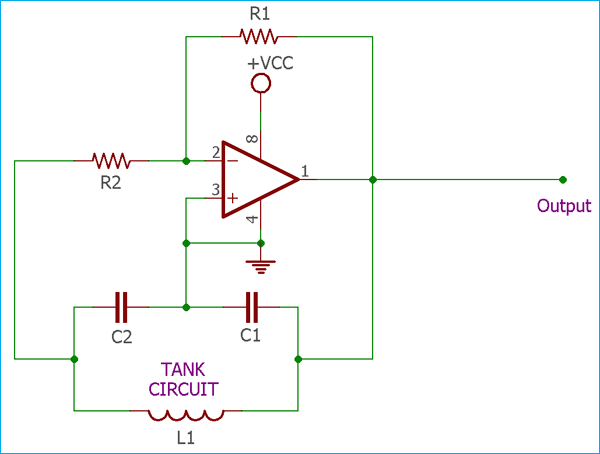 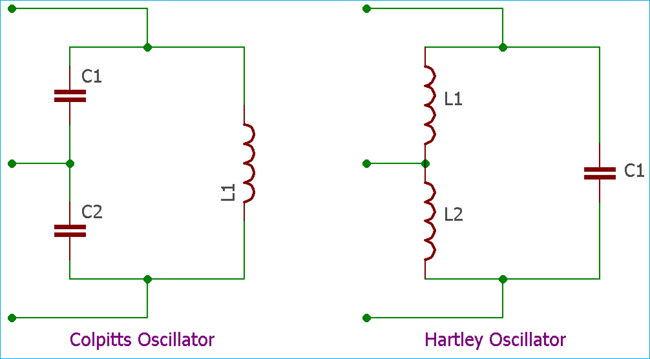 The Colpitts oscillator is an excellent choice in high-frequency operation. It can produce output frequency in Megahertz range as well as in Kilohertz range.

1. Due to the difficulties in a smooth variation of inductor and capacitor, the Colpitts oscillator is mainly used for fixed frequency generation.

2. The main use of Colpitts oscillator is in mobile or other radio frequency controlled communications devices.

4. In a few applications where continuous and undamped oscillation is needed in addition with thermal stability, Colpitts Oscillator is used.

5. For those applications which need a wide range of frequencies with minimum noise induced.

6. Many types of SAW-based sensors use Colpitts oscillator

7. Various types of metal detector use the Colpitts oscillator.

9. It has a huge application in military and commercial grade products.