In this project we are going to make an IoT Based Air Pollution Monitoring System in which we will monitor the Air Quality over a webserver using internet and will trigger a alarm when the air quality goes down beyond a certain level, means when there are sufficient amount of harmful gases are present in the air like CO2, smoke, alcohol, benzene and NH3. It will show the air quality in PPM on the LCD and as well as on webpage so that we can monitor it very easily.

Previously we have built the LPG detector using MQ6 sensor and Smoke detector using MQ2 sensor but this time we have used MQ135 sensor as the air quality sensor which is the best choice for monitoring Air Quality as it can detects most harmful gases and can measure their amount accurately. In this IOT project, you can monitor the pollution level from anywhere using your computer or mobile. We can install this system anywhere and can also trigger some device when pollution goes beyond some level, like we can switch on the Exhaust fan or can send alert SMS/mail to the user.

You can buy all the above components from here.

First of all we will connect the ESP8266 with the Arduino. ESP8266 runs on 3.3V and if you will give it 5V from the Arduino then it won’t work properly and it may get damage. Connect the VCC and the CH_PD to the 3.3V pin of Arduino. The RX pin of ESP8266 works on 3.3V and it will not communicate with the Arduino when we will connect it directly to the Arduino. So, we will have to make a voltage divider for it which will convert the 5V into 3.3V. This can be done by connecting three resistors in series like we did in the circuit. Connect the TX pin of the ESP8266 to the pin 10 of the Arduino and the RX pin of the esp8266 to the pin 9 of Arduino through the resistors.

ESP8266 Wi-Fi module gives your projects access to Wi-Fi or internet. It is a very cheap device and make your projects very powerful. It can communicate with any microcontroller and it is the most leading devices in the IOT platform. Learn more about using ESP8266 with Arduino here.

Connect a buzzer to the pin 8 of the Arduino which will start to beep when the condition becomes true.

In last, we will connect LCD with the Arduino. The connections of the LCD are as follows 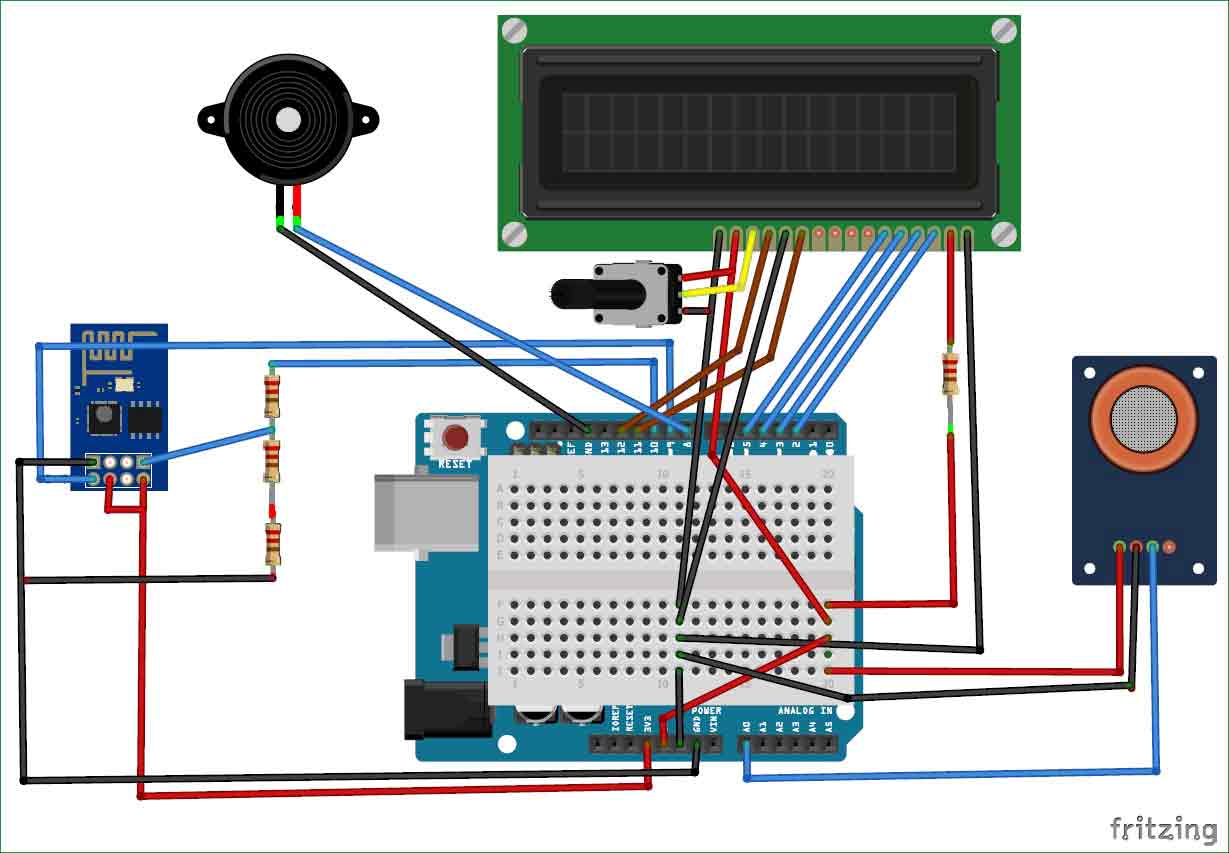 The MQ135 sensor can sense NH3, NOx, alcohol, Benzene, smoke, CO2 and some other gases, so it is perfect gas sensor for our Air Quality Monitoring Project. When we will connect it to Arduino then it will sense the gases, and we will get the Pollution level in PPM (parts per million). MQ135 gas sensor gives the output in form of voltage levels and we need to convert it into PPM. So for converting the output in PPM, here we have used a library for MQ135 sensor, it is explained in detail in “Code Explanation” section below.

Sensor was giving us value of 90 when there was no gas near it and the safe level of air quality is 350 PPM and it should not exceed 1000 PPM. When it exceeds the limit of 1000 PPM, then it starts cause Headaches, sleepiness and stagnant, stale, stuffy air and if exceeds beyond 2000 PPM then it can cause increased heart rate and many other diseases.

Before beginning the coding for this project, we need to first Calibrate the MQ135 Gas sensor. There are lots of calculations involved in converting the output of sensor into PPM value, we have done this calculation before in our previous Smoke Detector project. But here we are using the Library for MQ135, you can download and install this MQ135 library from here: https://github.com/GeorgK/MQ135.

Using this library you can directly get the PPM values, by just using the below two lines:

But before that we need to calibrate the MQ135 sensor, for calibrating the sensor upload the below given code and let it run for 12 to 24 hours and then get the RZERO value.

Now we can begin the actual code for our Air quality monitoring project.

In the code, first of all we have defined the libraries and the variables for the Gas sensor and the LCD. By using the Software Serial Library, we can make any digital pin as TX and RX pin. In this code, we have made Pin 9 as the RX pin and the pin 10 as the TX pin for the ESP8266. Then we have included the library for the LCD and have defined the pins for the same. We have also defined two more variables: one for the sensor analog pin and other for storing air_quality value.

Then we will set the baud rate for the serial communication. Different ESP’s have different baud rates so write it according to your ESP’s baud rate. Then we will send the commands to set the ESP to communicate with the Arduino and show the IP address on the serial monitor.

For printing the output on the webpage in web browser, we will have to use HTML programming. So, we have created a string named webpage and stored the output in it. We are subtracting 48 from the output because the read() function returns the ASCII decimal value and the first decimal number which is 0 starts at 48.

The following code will call a function named sendData and will send the data & message strings to the webpage to show.

The following code will print the data on the LCD. We have applied various conditions for checking air quality, and LCD will print the messages according to conditions and buzzer will also beep if the pollution goes beyond 1000 PPM.

Testing and Output of the Project:

Before uploading the code, make sure that you are connected to the Wi-Fi of your ESP8266 device. After uploading, open the serial monitor and it will show the IP address like shown below. 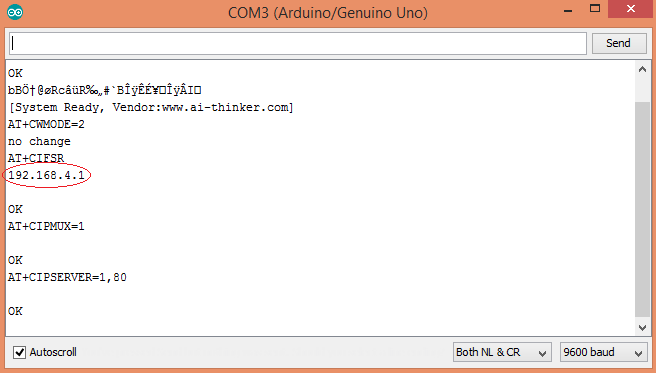 Type this IP address in your browser, it will show you the output as shown below. You will have to refresh the page again if you want to see the current Air Quality Value in PPM.

We have setup a local server to demonstrate its working, you can check the Video below. But to monitor the air quality from anywhere in the world, you need to forward the port 80 (used for HTTP or internet) to your local or private IP address (192.168*) of you device. After port forwarding all the incoming connections will be forwarded to this local address and you can open above shown webpage by just entering the public IP address of your internet from anywhere. You can forward the port by logging into your router (192.168.1.1) and find the option to setup the port forwarding.