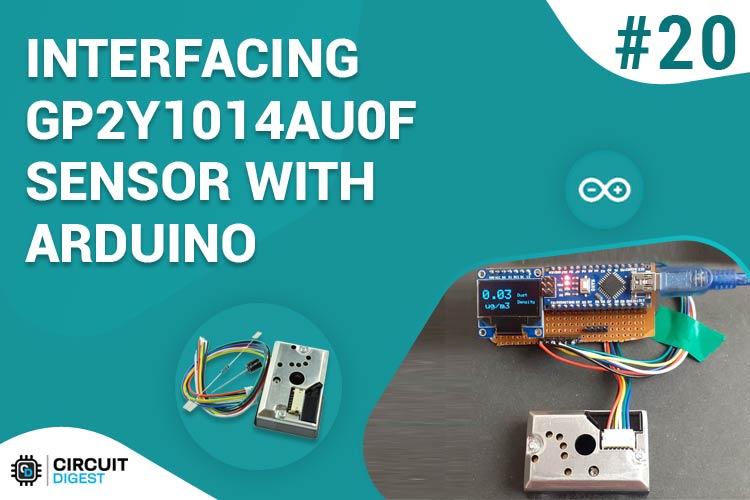 Air pollution is a major issue in many cities and the air quality index is getting worse every day. According to the World Health Organization report, more people are killed prematurely by the effects of hazardous particles presented in the air than from car accidents. According to the Environmental Protection Agency (EPA), indoor air can be 2 to 5 times more toxic than outdoor air. So here we build a project to monitor air quality by measuring dust particles density in the air.

So in continuation of our previous projects like LPG detector, Smoke detector, and Air Quality Monitor, here we are going to interface the Sharp GP2Y1014AU0F Sensor with Arduino Nano to measure the Dust Density in Air. Apart from the Dust sensor and Arduino Nano, an OLED display is also used to display the measured values. Sharp’s GP2Y1014AU0F Dust Sensor is very effective in detecting very fine particles like cigarette smoke. It is designed for use in Air purifiers and Air conditioners. 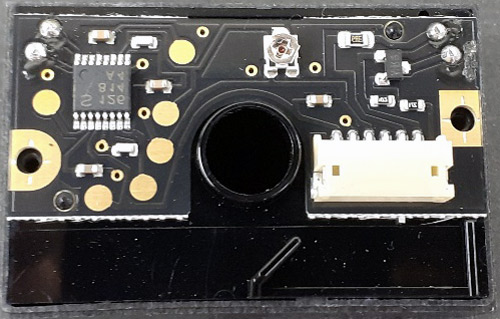 Sharp's GP2Y1014AU0F is a tiny six-pin analog output optical air quality/optical dust sensor that is designed to sense dust particles in the air. It works on the principle of laser scattering. Inside the sensor module, an infrared emitting diode and a photosensor are diagonally arranged near the air inlet hole as shown in the below image: 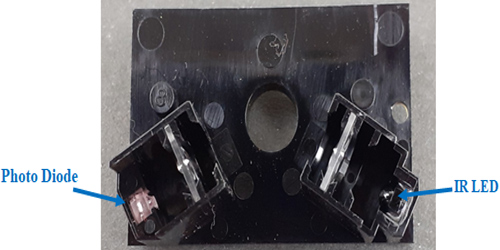 As mentioned earlier, the GP2Y1014AU0F sensor comes with a 6-pin connector. The below figure and table shows the pin assignments for GP2Y1014AU0F: 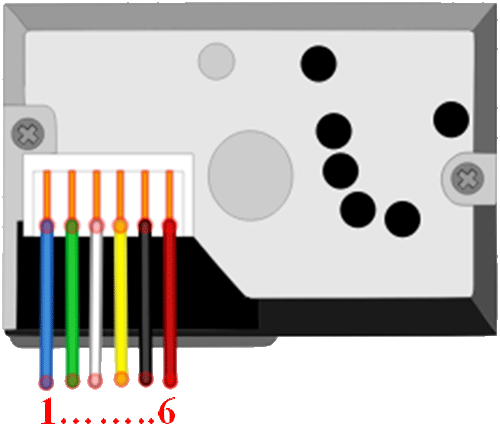 OLED (Organic Light-Emitting Diodes) is a self light-emitting technology, constructed by placing a series of organic thin films between two conductors. A bright light is produced when an electric current is applied to these films. OLEDs are using the same technology as televisions, but have fewer pixels than in most of our TVs. 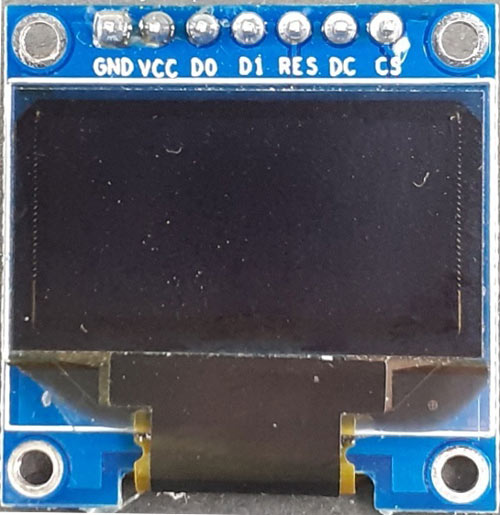 For this project, we are using a Monochrome 7-pin SSD1306 0.96” OLED display. It can work on three different communications Protocols: SPI 3 Wire mode, SPI four-wire mode, and I2C mode. The pins and its functions are explained in the table below:

We have already covered OLED and its types in details in the previous article.

Learn more about OLED and its interfacing with different microcontrollers by following the link.

Circuit Diagram for Interfacing Sharp GP2Y1014AU0F Sensor with Arduino is given below: 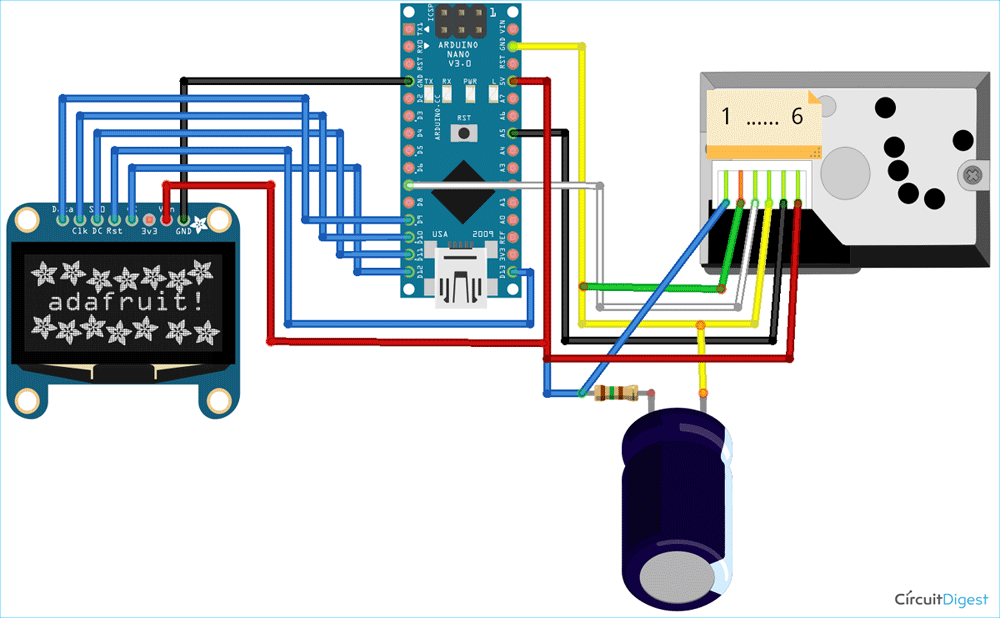 After soldering all the components on the perf board, it will look something like below. But it can be also built on a breadboard. I have soldered the GP2Y1014 sensor on the same board that I used to interface the SDS011 sensor. While soldering, make sure your solder wires should be at enough distance from each other.

The complete Arduino code for this project is given at the end of the document. Here we are explaining some important parts of the code.

After installing the libraries to Arduino IDE, start the code by including the needed libraries files. Dust sensor doesn’t require any library as we are reading the voltage values directly from the analog pin of Arduino.

Then, define the OLED width and height. In this project, we’re using a 128×64 SPI OLED display. You can change the SCREEN_WIDTH, and SCREEN_HEIGHT variables according to your display.

Then define the SPI communication pins where OLED Display is connected.

Then, create an Adafruit display instance with the width and height defined earlier with the SPI communication protocol.

Now inside the setup() function, initialize the Serial Monitor at a baud rate of 9600 for debugging purposes. Also, Initialize the OLED display with the begin() function.

Inside the loop() function, read the voltage Values from analog pin 5 of Arduino Nano. First, turn on the IR LED and then wait for 0.28ms before taking a reading of the output voltage. After that, read the voltage values from the analog pin. This operation takes around 40 to 50 microseconds, so introduce a 40-microsecond delay before turning the dust sensor led off. According to the specifications, LED should be pulsed on once every 10ms, so wait for the remainder of the 10ms cycle = 10000 - 280 - 40 = 9680 microseconds.

Then in the next lines, calculate the Dust density using the output voltage and signal value.

After that, set the text size and text colour using the setTextSize() and setTextColor().

Then in next line, define the position where the text starts using the setCursor(x,y) method. And print the Dust Density Values on OLED Display using display.println() function.

And in the last, call the display() method to display the text on OLED Display.

Once the hardware and code are ready, it is time to test the sensor. For that, connect the Arduino to the laptop, select the Board and Port, and hit the upload button. As you can see in the below image, it will display Dust Density on OLED Display. 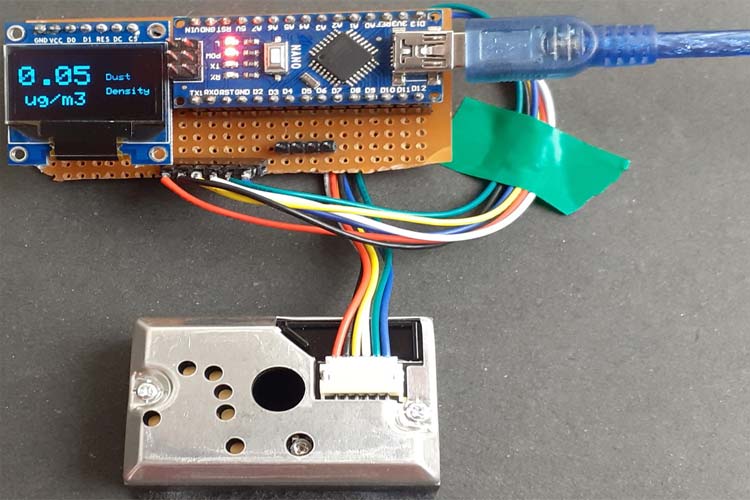 The complete working video and code for Arduino Air Quality Sensor are given below. Hope you enjoyed the tutorial and learned something useful. If you have any questions, leave them in the comment section or use our forums for other technical queries.

From where i can buy this

From where i can buy this Sharp GP2Y1014AU0F Sensor ? Kindly reply soon