Digital wall Clocks are getting more popular now days and they are better than analog clock as it provides accurate time in hours, minutes and seconds and its easy to read the values. Some digital clocks also have many facilities like displaying temperature, humidity, setting multiple alarms etc. Most of the digital clocks use seven segment display. 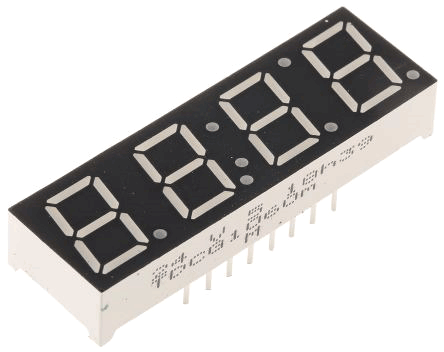 4-digit 7 Segment display has four seven segment display joined together or we can say multiplexed together. They are used to display numerical values and also some alphabets with decimals and colon. The display can be used in both direction. Four digits are useful for making digital clocks or like counting numbers from 0 to 9999. Below is the internal diagram for 4-Digit 7 Segment display.

Each segment has one LED with individual LED control. There are two types of seven segment displays such as Common Anode and Common Cathode. The above image shows the common anode type 7 segment display.

Learn more about 7 segment displays here and check how it can be interfaced with other microcontrollers: 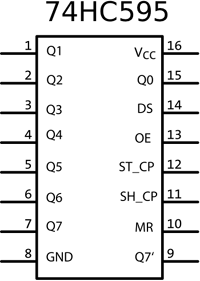 The IC 74HC595 also known as 8-Bit Serial IN – Parallel OUT Shift Register. This IC can receive data input in serial and can control 8 output pins in parallel. This is useful in reducing pins used from microcontroller. You can find all the 74HC595 shift register related projects here.

This IC uses three pins such as Clock, Data & Latch with the microcontroller to control the 8 output pins of the IC. The clock is used to provide continuously pulses from microcontroller and data pin is used to send the data like which output needs to be turned ON or OFF at the respective clock time.

DS3231 is an RTC module. RTC stands for Real Time Clock. This module is used to remember the time and date even when the circuit is not powered. It has a battery backup CR2032 to run the module in absence of external power. This module also includes a temperature sensor. The module can be used in embedded projects such as making digital clock with temperature indicator etc. Here are some useful projects using it: 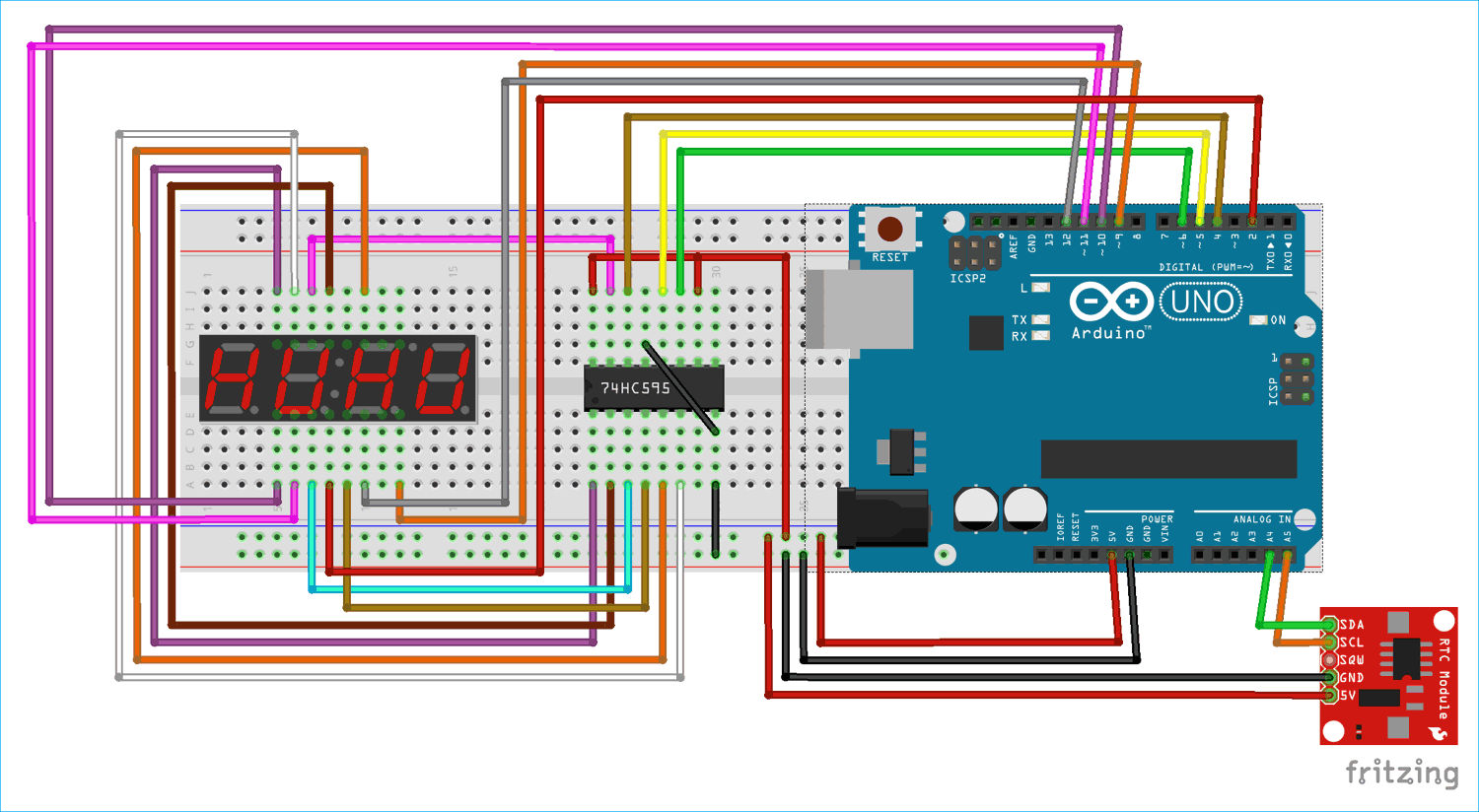 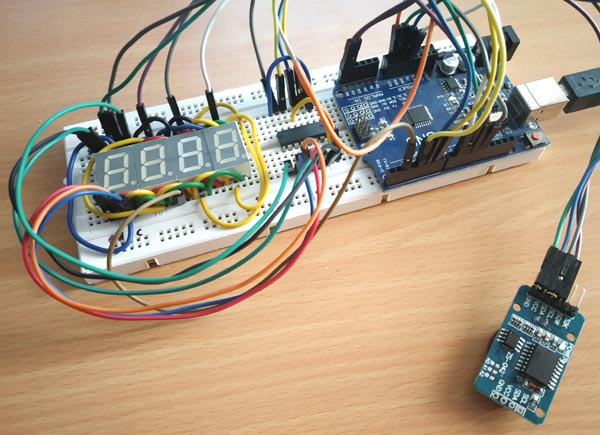 The complete code and working video are attached at the end of this tutorial. In the programming section, how the time (hour and minute) is taken from the RTC module in 24hr format and then it is converted into respective format for displaying them in the 4-digit 7 Segment display will be explained.

In this concept, hour and minute are taken first from RTC and they are combined together like 0930 (09:30 pm) and then the individual digits are separated like thousand, hundred, tens, unit and the individual digits converted into binary format like 0 into 63 (0111111). This binary code is sent to a shift register and then from the shift register to the seven-segment, successfully displaying the Digit 0 in seven segment display. This way, the four digits are multiplexed and hour and minute is displayed.

Initially, the necessary library is included such as DS3231 library and Wire library(I2C library).

The pins are defined for the seven segment control. These controls will play important role in multiplexing the display.

The variables are declared to store the converted or raw result taken from the RTC.

Next the object for the class DS3231 is declared as RTC to simplify the use in further lines.

The pin mode are defined, whether the GPIO will behave as output or input.

The loop runs infinitely and it takes the time in hour and minute from the RTC DS3231 module. ‘h24’ indicates the 24hr format variable.

After that a switch case statement for each individual digit is defined for converting them into respective format (binary format) and sending out via shift register to display in 7-segment. For example (For 1 digit it is changed into 06 (0000 0110)). So that it is sent out via shift and 1 digit is displayed in 7-segment (0 for LOW, 1 for HIGH). 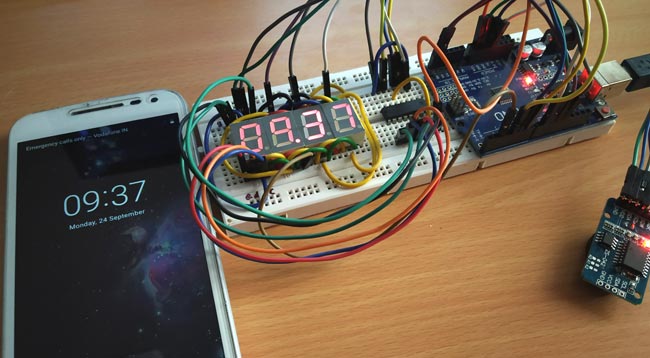 This finishes the complete code. Most of the function explanation are given in the code comment section just beside the code line. The frequency of the clock will decide the view of Time and quality of multiplexing I.e. if low clock is used then the flickering can be seen where as if the clock speed is high then there won’t be such flickering and a steady time can be seen.

Note that to access the RTC module, the I2C bus voltage has to be maintained. In order to give any suggestion or if you have any doubt then please comment below.