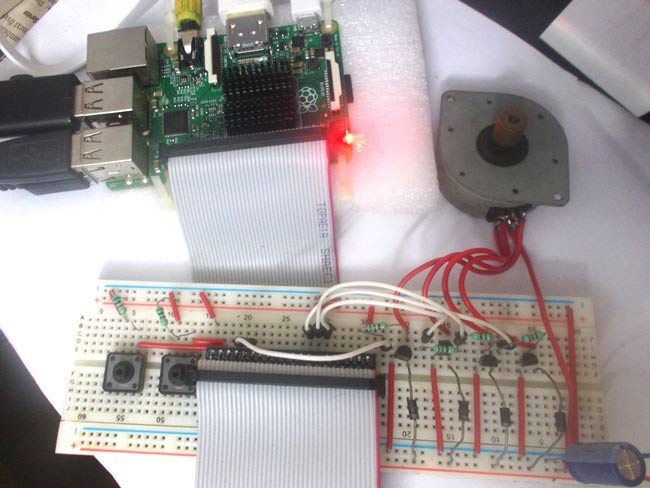 In this tutorial, we will Control the Speed of a Stepper Motor using Raspberry Pi. In Stepper Motor, as the name itself says, the rotation of shaft is in Step form. There are different types of Stepper Motor; in here we will be using the most popular one that is Unipolar Stepper Motor. Unlike DC motor, we can rotate stepper motor to any particular angle by giving it proper instructions.

There are 40 GPIO output pins in Raspberry Pi 2. But out of 40, only 26 GPIO pins (GPIO2 to GPIO27) can be programmed. Some of these pins perform some special functions. With special GPIO put aside, we have only 17 GPIO remaining. Each of these 17 GPIO pin can deliver a maximum of 15mA current. And the sum of currents from all GPIO Pins cannot exceed 50mA. To know more about GPIO pins, go through: LED Blinking with Raspberry Pi

There are +5V (Pin 2 & 4) and +3.3V (Pin 1 & 17) power output pins on the board for connecting other modules and sensors. These power rails cannot be used to drive the Stepper Motor, because we need more power to rotate it. So we have to deliver the power to Stepper Motor from another power source. My stepper motor has a voltage rating of 9V so I am using a 9v battery as my second power source. Search your stepper motor model number to know voltage rating. Depending on the rating choose the secondary source appropriately.

As stated earlier, we need a driver circuit to drive the Stepper Motor. We will also be designing a Simple Transistor Driver Circuit here. 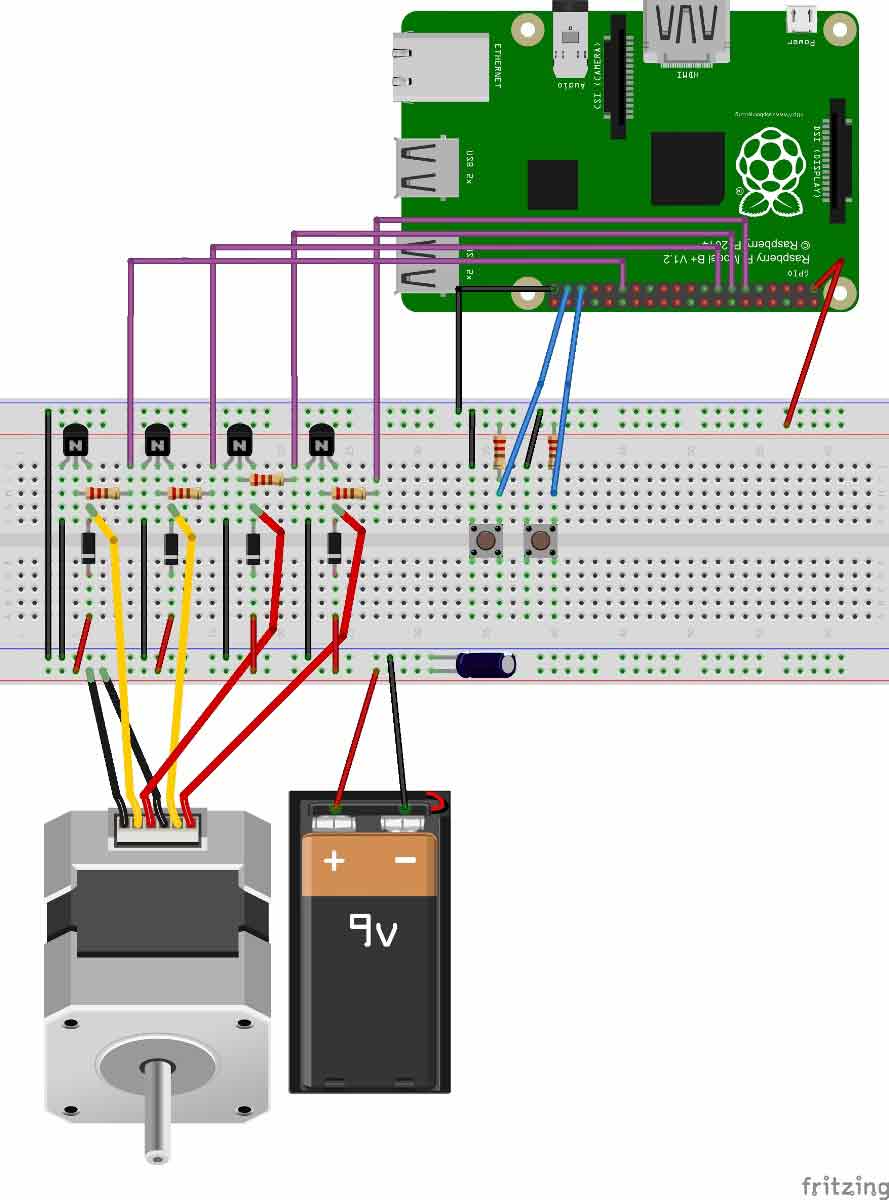 Stepper motor use 200 steps to complete 360 degree rotation, means its rotate 1.8 degree per step. As we are driving a Four Stage Stepper Motor, so we need to give four pulses to complete single logic cycle. Each step of this motor completes 1.8 degree of rotation, so in order to complete a cycle we need 200 pulses. So 200/4 = 50 logic cycles needed to complete a single rotation. Check this to know more about Steppers Motors and its Driving Modes.

We will be driving each of these four coils by a NPN transistor (2N2222), this NPN transistor takes the logic pulse from PI and drives the corresponding coil. Four transistors are taking four logics from PI to drive four stages of stepper motor.

The transistor driver circuit is a tricky setup; here we should pay attention that wrongly connecting the transistor might load the board heavily and damage it. Check this to properly understand the Stepper Motor Driver Circuit.

The motor is an induction and so while switching the motor, we experience inductive spiking. This spiking will heat up the transistor heavily, so we will be using Diode (1N4007) to provide protection to transistor against Inductive Spiking.

In order to reduce the voltage fluctuations, we will be connecting a 1000uF capacitor across the power supply as shown in the Circuit Diagram.

We can refer the GPIO pins of PI, either by pin number on board or by their function number. Like ‘PIN 35’ on the board is ‘GPIO19’. So we tell here either we are going to represent the pin here by ‘35’ or ‘19’.

We are setting four of GPIO pins as output for driving four coils of stepper motor.

We are setting GPIO26 and GPIO19 as input pins. We will detect button press by these pins.

This command executes the loop 100 times, x being incremented from 0 to 99.

We have all the commands needed to achieve the Speed Control of Stepper Motor with this.

So with two buttons we can control the delay, which in turns control the speed of the stepper motor.

I like it I need more information about it
all

Wow - great tutorial for a