Op-amp or Operational Amplifier is the backbone of Analog Electronics and out of many applications, such as Summing Amplifier, differential amplifier, Instrumentation Amplifier, Op-Amp can also be used as integrator which is a very useful circuit in analog related application.

Op-amp is very widely used component in Electronics and is used to build many useful amplifier circuits.

A simple Op-amp configuration consists of two resistors, which creates a feedback path. In the case of Integrator amplifier, the feedback resistor is changed with a capacitor.

In the above image, a basic integrator circuit is shown with three simple components. The resistor R1 and capacitor C1 is connected across the amplifier. The amplifier is in Inverting configuration.

Op-amp gain is Infinite, therefore the Inverting input of the amplifier is a virtual ground. When a voltage is applied across the R1, the current start to flow through the resistor as the capacitor has very low resistance. The capacitor is connected in the feedback position and the resistance of the capacitor is insignificant.

At this situation, if the amplifier gain ratio is calculated, the result will be less than the unity. This is because the gain ratio, XC/R1 is too small. Practically, the capacitor has very low resistance between the plates and whatever the value R1 holds, the output result of XC/R1 will be very low.

The capacitor begins to charge up by the input voltage and in the same ratio, the capacitor impedance also starts to increase. The charging rate is determined by the RC - time constant of R1 and C1. The op-amp virtual earth now hampered and the negative feedback will produce an output voltage across the op-amp to maintain the virtual earth condition across the input.

The Op-amp produce a ramp output till the capacitor gets fully charged. The capacitor charges current decreases by the influence of the potential difference between the Virtual earth and the negative output.

The complete mechanism explained above can be described by using mathematical formation.

If Kirchhoff’s current law is applied across the junction G, which is a virtual ground, the iR1 will be the sum of current entering in the Inverting terminal (Op-amp pin 2) and the current passing through the Capacitor C1.

The capacitor C1 has a voltage-current relationship. The formula is –

Now let's apply this formula in a practical scenario. The

Now the is equal to

As the G node is a virtual ground point and the op-amp is an ideal op-amp, the voltage across this node is 0. 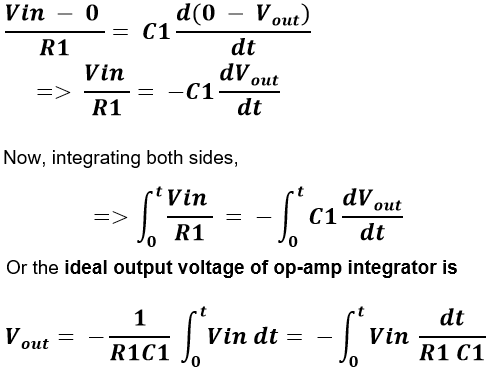 The basic Integrator circuit, which is shown previously, has a drawback. The capacitor blocks the DC and due to this, the DC gain of the Op-Amp circuit become Infinite. Therefore, any DC voltage at the Op-amp Input, saturates the Op-amp output. To overcome this problem, resistance can be added in parallel with the capacitor. The resistor limits the DC gain of the circuit.

If the square wave is provided as an input to Integrator Amplifier, the produced output will be a triangular wave or saw tooth wave. In such a case, the circuit is called a Ramp generator. In square wave, voltage levels change from Low to High or high to low, which makes the capacitor gets charged or discharged.

The charging and discharging rate depend on the resistor-capacitor combination. For perfect integration, the frequency or the periodic time of the input square wave needs to be less than the circuit time constant, which is referred as: T should be less than or equal to the CR (T <=CR).

As discussed previously, that in low frequency or in DC, the capacitor produces a blocking current which eventually reduces the feedback and the output voltage saturates. In such a case, a resistor is connected in parallel with capacitor. This added resistor provides a feedback path. 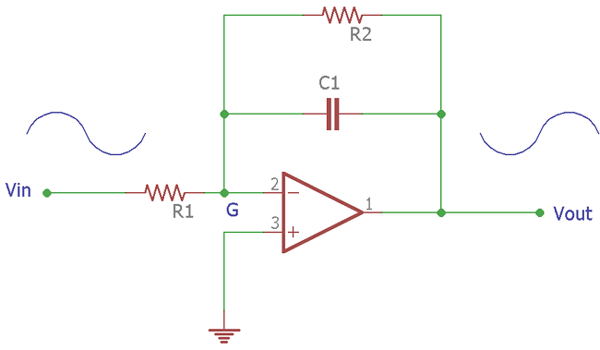 In the above image, an additional resistor R2 is connected in parallel with the capacitor C1. The output sine wave is 90 degree out of phase.

The corner frequency of the circuit will be

And the overall DC gain can be calculated using –