Designing an AND Gate using Transistors

Logic Gates are the basics of a many digital electronic circuit. From the basic Flip-Flops to Microcontrollers Logic gates form the underlying principle on how bits are stored and processed. They state the relation between every input and output of a system using an Arthmetic logic. There are many different types of logic gates and each of them has a different logic which be used for different purposes. But the focus of this article will be on the AND Gate because later we would be building an AND Gate using a BJT transistor circuit. Exciting right? Lets get started.

The equations output can be easily explained using the AND Gate Boolean Equation, which is Q = A x B or Q = AB. Hence, for an AND Gate the output is HIGH only when both the inputs are HIGH.

A transistor is a semiconductor device with three terminals that can be connected to an external circuit. The device can be used as a switch and also as an amplifier to change the values or control the passing of an electrical signal.

For building an AND logic gate using a transistor we would be using BJT transistors which can be further classified into two types: PNP and NPN – Bipolar Junction Transistors. The circuit symbol for each of them can be seen below. 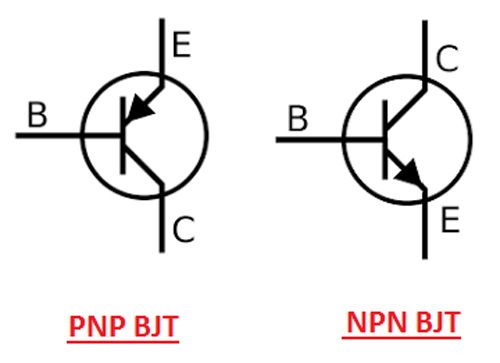 This article will explain to you, how to build AND Gate circuit using transistor. The logic of an AND gate is explained above already and to build an AND gate using a transistor we will follow the same truth table shown above.

The list of components required to build an AND gate using an NPN transistor are listed as follows:

The circuit represents both the inputs A & B for the AND gate and Output, Q which also has a +5V supply to the collector of the first transistor which is connected in series to the second transistor and an LED is connected to the emitter terminal of the second transistor. The inputs A & B are connected to the base terminal of Transistor 1 and Transistor 2, respectively and the output Q goes to the positive terminal LED. The below diagram represents the above-explained circuit to build an AND gate using NPN Transistor. 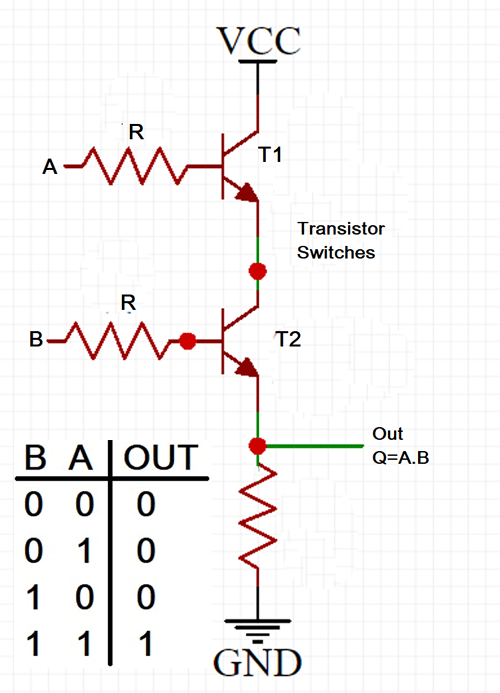 The Transistors used in this tutorial are BC547 NPN Transistor and were added with all the above-mentioned components in the circuit, as shown below.

If you do not have the push buttons with you, you can also use wires as a switch by adding or removing them whenever required (instead of pressing the swtich). The same could be seen in the video where I would use the wires as a switch connected to the base terminal for both the transistors.

The same circuit when built using the above mentioned hardware components, the circuit would look something like in the image below. 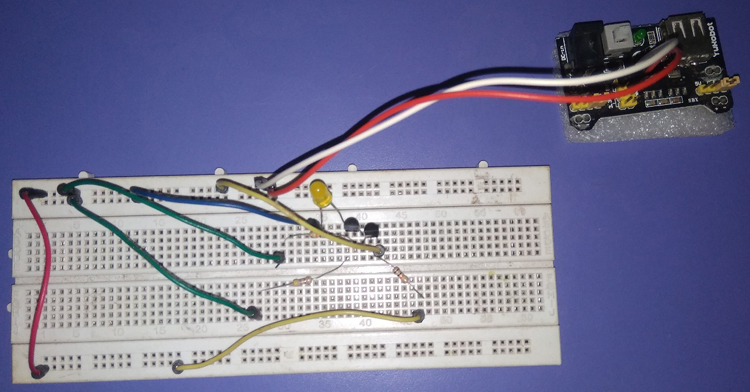 Working of And Gate using Transistor

Here we will be using the transistor as a switch and so, when a voltage is applied through a Collector terminal of the NPN transistor, the voltage reaches the Emitter Junction only when the Base Junction is having a voltage supply between 0V and Collector Voltage. 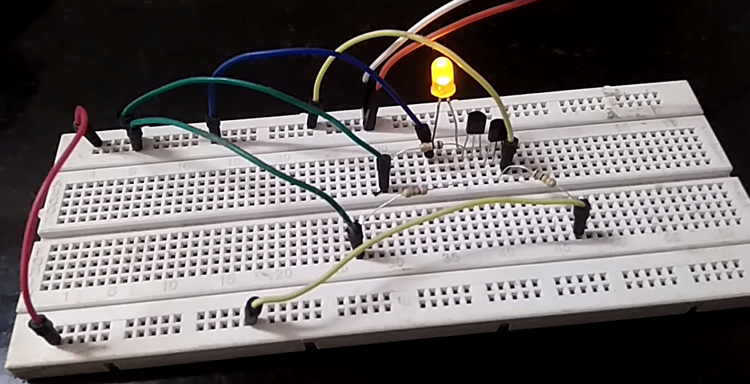 Similarly, the circuit above would make the LED glow i.e. the output is 1 (High) only when both the inputs are 1 (High) i.e. when there is a voltage supply at the base terminal of both the transistors. Meaning, there will be a straight line current path from VCC (+5V power supply) to the LED and further to the ground. Rest in all the cases, the output will be 0 (Low) and the LED will be OFF. These all can be explained in more detail by understanding each case one by one.

When both the inputs A & B are 0, you need not press any of the pushbuttons in this case. If you are not using the push buttons then remove the wires connected with, the pushbuttons and the base terminal of both the transistors. So, we got both inputs A & B as 0 and now we need to check for the output, which also should be 0 according to the AND gate truth table. 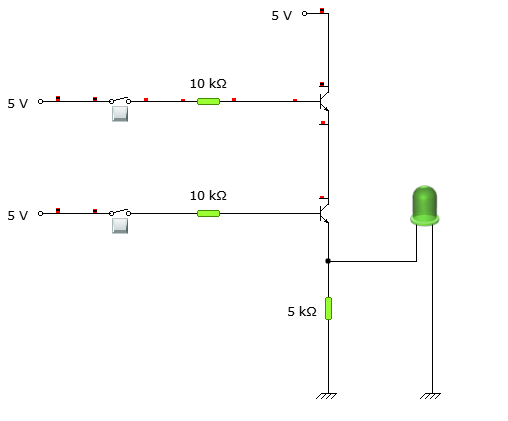 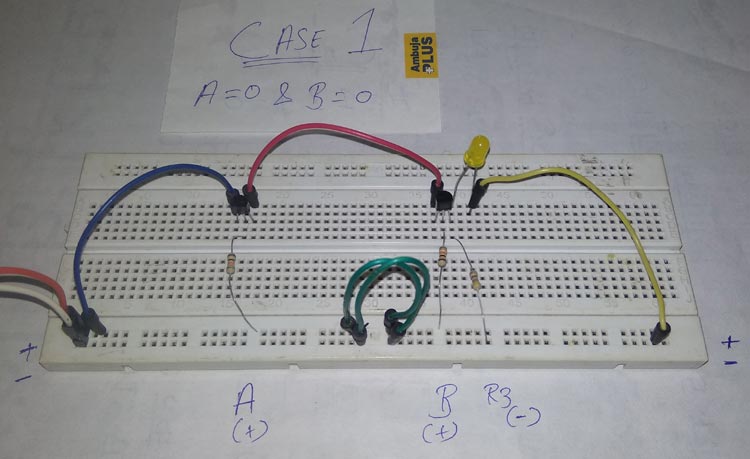 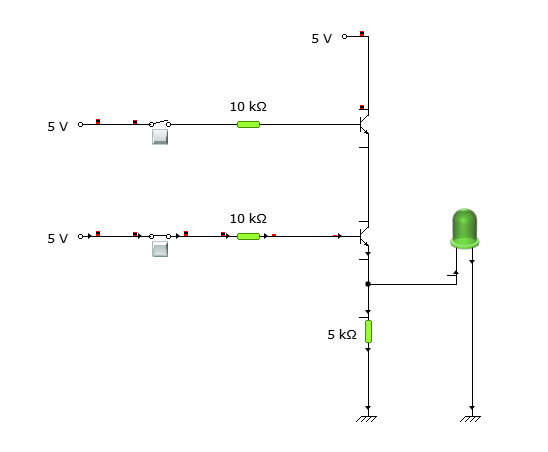 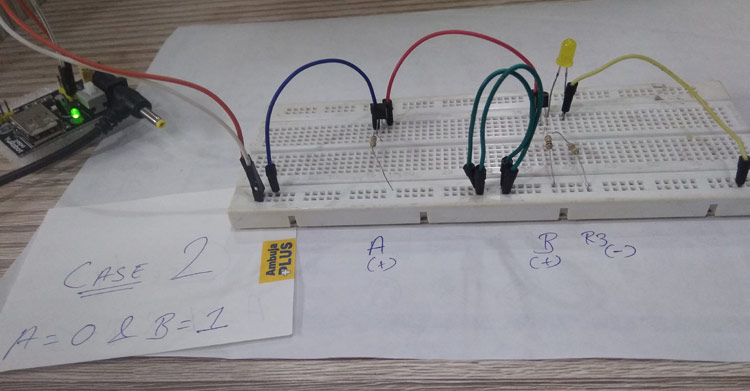 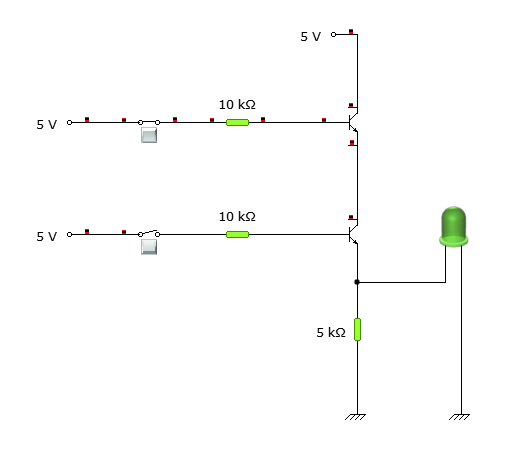 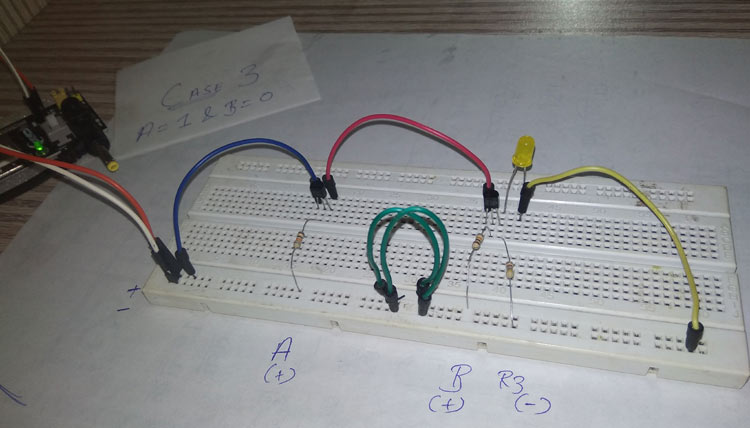 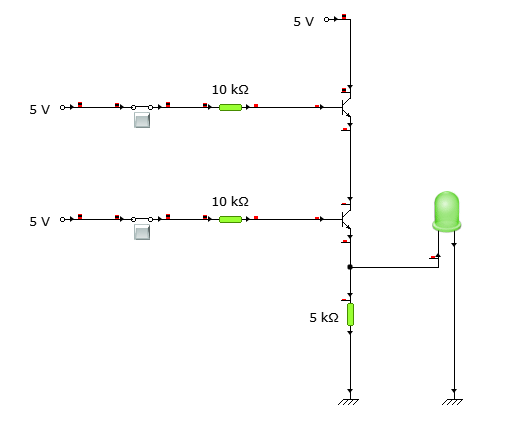 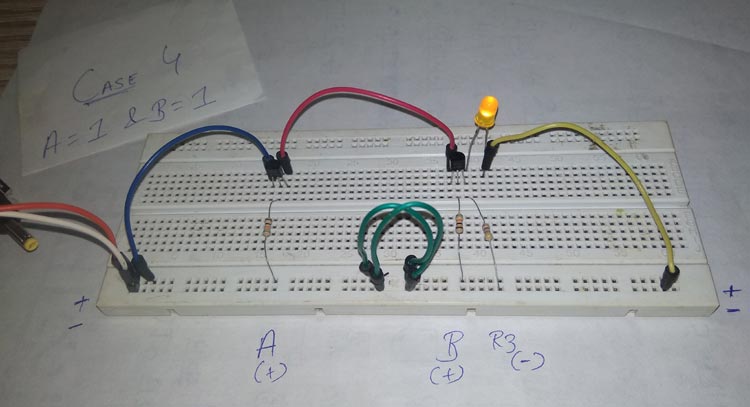 Hence, all four cases have the same inputs and outputs as the actual AND logic gate. Thus, we have built an AND Logic gate using a Transistor. Hope you understood the tutorial and enjoyed learning something new. The complete working of the set-up can be found in the video below. In our next tutorial we will also learn how to build OR gate using transistor and NOT gate using Transistor. If you have any questions leave them in the comment section below or use our forums for other technical questions.

My son and I built this gate using the exact same materials (and in fact have built this same AND gate using other tutorials as well. EVERY time case 2 doesn't work: one button is pressed, the other is not and the light STILL turns on.

Does anyone have any insight as to why that might be happening?

Thank you for your help!