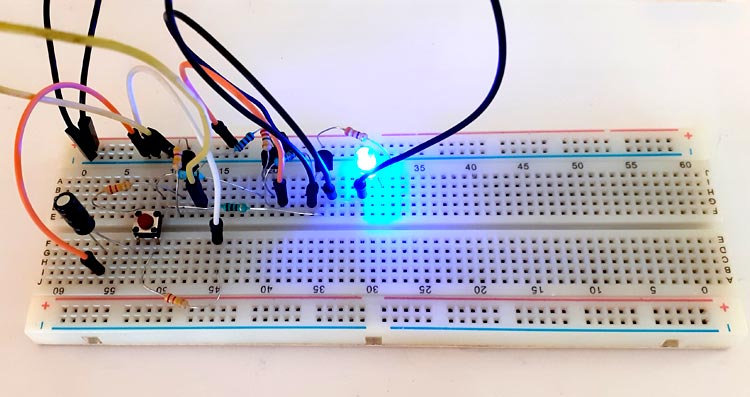 A latch circuit can ‘hold’ the circuit in either on or off state until any external signal is applied to it. Latch circuit retains its position (either on or off) even after the input signal is removed and can store one bit of information as long as the device is powered. For active high signal, it stores one, and for active low signal, it stores zero.

Latching can be compared to Push-on-Push-off button where push button connects the circuit when pressed one time and disconnects the circuit when pressed again. Here we will use a BC547 NPN transistor and BC557 PNP transistor with a normal push-button to build a soft latching power switch. This soft latch circuit doesn’t require any microcontroller or any IC to turn it on and off. 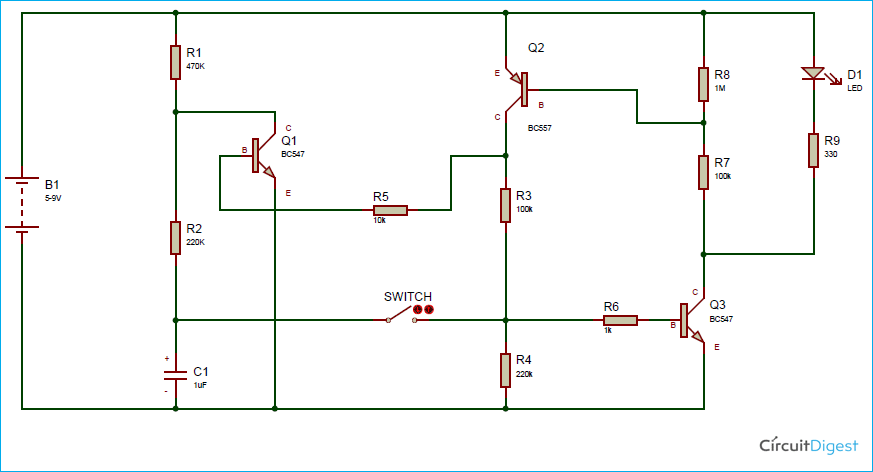 Circuit diagram for soft latching power switch circuit is given above. It can be easily built on a breadboard or PCB. Components used in this circuit are easily available and very cheap. Resistors are used as current limiting resistors while the Capacitor is used to prevent false triggering of circuit.

When we first apply the supply voltage by pressing the push button, all three transistors are in off condition, and the output voltage is zero; thus, the circuit remains in its off or unlatched state. In this condition capacitor, C1 charges through R1 and R2 resistor. When we press the push button switch, it causes capacitor C1 to pass its voltage to the base of the transistor Q3 through the R6 resistor. This turns on the Q3 transistor, and Q3 transistor turns on the Q2 transistor. The voltage developed across the R4 resistor will keep Q2 turned on when the button is released. Q1 also turn on during this time, and the circuit is now in the on or latched state and remains that way even though S1 is open.

At this state transistor, Q1 is now saturated, causing C1 to discharge via R2. When we press the push button switch again, capacitor C1 is in a discharged condition and will pass the zero voltage to the transistor Q3, causing the transistor to turn off. As a result, all the three transistors are in off condition, and circuit returns to its off or unlatched condition again. As Q1 is now off, capacitor C1 begins to charge via R1 and R2 resistor again. So every press of switch follows the same procedure to turn on and off the circuit.

Capacitor is used to limit the speed of the latching process. Without the capacitor circuit will turn on and off way to fast. Values of resistors and capacitor can vary according to the applications.

I made this soft latch switch circuit on both breadboard and perfboard, and after the complete connections on perfboard, my hardware looked like this: 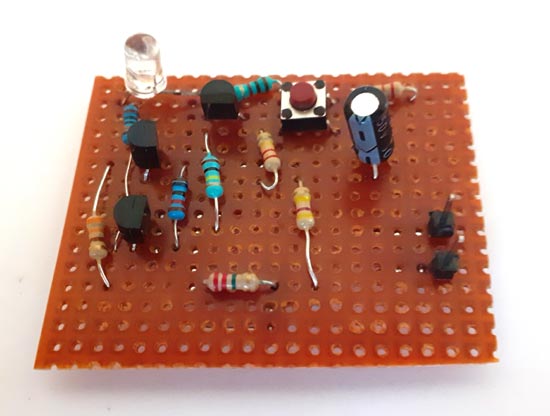 Applications of the Soft Latching Circuit

What's the maximum voltage it

What's the maximum voltage it can work with