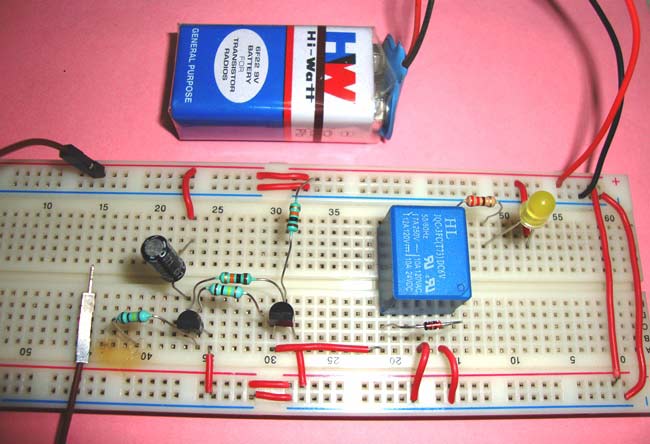 Latch basically means “to become fixed in a particular state”. In Electronics, Latch Circuit is a circuit which locks its output, when a momentarily input trigger signal is applied, and retains that state, even after the input signal is removed. This State will remain indefinitely until the power is reset or some external signal is applied. Latch circuit is similar like SCR (Silicon Controlled Rectifier) and can be very useful in alarm circuits, where a small trigger signal will Turn On the alarm for indefinite period, until reset manually. We have previously built some alarm circuits:

Today we are going build a very simple and cheap Latch circuit using Transistors, this circuit can be used trigger the AC mains loads and alarms. Initially, both the transistors are in OFF state, and Relay is deactivated. PNP Transistor BC557 base is connected to Positive voltage with current limiting resistor R3, so that it won’t conducts accidently. Capacitor C1 has been used precautionary, to prevent the accidental and false triggering of circuit.

Now when a small positive voltage is applied to the Base of Transistor BC547, it turns ON the transistor and Base of the transistor Q2 BC557 gets connected to the Ground. Resistor R2 and R3 prevents the short circuit in this condition. Now when Base of Transistor BC557 gets grounded, it starts conducting and energises the Coil of relay, which activates the Relay and turns ON the device connected to Relay. In our case LED will glow.

Now the alarm or device, connected to the Relay, will remain ON until the Power is reset. Or a Reset Push button can be added to this circuit, to break the Latch state. This button would connect the base of transistor BC547 to the Ground, which turn OFF the Q1 and Q2, and breaks the Latch.

If you do not want to Latch any AC appliances, and just want Turn ON LED or a Buzzer, you can simply remove the Relay and connect LED directly in place of Relay, with a resistor.

Latch curcuit for a wireless doorbell to keep the led on .

I have a wireless door bell I am using for a mailbox alarm with a mercury switch for activation. The receiver sounds a chime and flashes an LED but I want the LED to stay on until I reset it. Should I use a latching relay or transistor circuit?
Thanks

You can use this circuit or

Hi, unfortunately all these pnp-npn transistor latch variations have very sensitive input (I guess it is because of positive feedback). Mine catches EM noise from 20W AC motor turning on nearby. Dangerous if it turns on some heavy equipment.

hello from morocco i need to

Could you please explain how

Could you please explain how the false triggering might occur, and thus how capacitor prevents it?

The picture shows a 9V

The picture shows a 9V battery and the circuit shows a 9V input, but the relay says 6V. When the relay is activated, 9V would be applied across the LED and R5, and 220 ohms seems a little light for and LED and 9V.

Am I missing something?