Power supplies can be classified into two broad categories, one is the AC Power supply and the other is DC power supply. As we know only AC power can be generated and since it is more economical we use AC for transmission and thus most of the electrical machines/devices runs on AC power. But the standard Voltage and Frequency supplied from the Generating stations might not be good enough to drive certain Industrial machines. In those cases we employ converters and inverters to convert one form of power supply into another form such as into a different voltage rating, current rating or frequency rating. A Cycloconveter is one such converter which converts AC power in one frequency into AC power of an adjustable frequency. In this article we will learn more about these Cycloconverters their types, working and applications.

The standard definition for Cycloconverters from Wikipedia goes as follows “A cycloconverter (CCV) or a cycloinverter converts a constant voltage, constant frequency AC waveform to another AC waveform of a lower frequency by synthesizing the output waveform from segments of the AC supply without an intermediate DC link”

One particular property of Cycloconverters is that it does not use a DC link in the conversion process thus making it highly efficient. The conversion is done by using power electronic switches likes   Thyristors and switching them in a logical manner. Normally these Thyristors will be separated into two half, the positive half and the negative half. Each half will be made to conduct by turning them during each half cycle of the AC form thus enabling bi-directional power flow. For now imagine Cycloconverters as a black box which take in a fixed Voltage fixed Frequency AC power as input and provides a Variable frequency, variable Voltage as output as shown in the illustration below.

We will learn what could possibly be going on inside this black box as we go through the article.

Why do we need Cycloconverters?

The answer to this question is Speed Control. Cycloconveters are extensively used for driving large motors like the one used in Rolling mills, Ball mills Cement kils etc. The out frequency of a Cycloconverters can be reduced upto to zero which helps us to start very large motors with full load at minimum speed and then gradually increase the speed of the motor by increasing the output Frequency. Before the invention of Cycloconverters, these large motors has to be unloaded completely and then after starting the motor it has to be loaded gradually which results in time and man power consumption.

Step-Up Cycloconverters: Step-Up CCV, as the name suggests this type of CCV provide output frequency greater than that of input frequency. But it is not widely used since it not have much particle application. Most application will require a frequency less than 50Hz which is the default frequency here in India. Also Step-Up CCV will require forced commutation which increases the complexity of the circuit.

Step-Down Cycloconverters: Step-Down CCV, as you might have already guessed it well.. just provides an output frequency which is lesser then the input frequency. These are most commonly used and work with help of natural commutation hence comparatively easy to build and operate. The Step-Down CCV is further classified into three types as shown below we will look into each of these types in detail in this article. 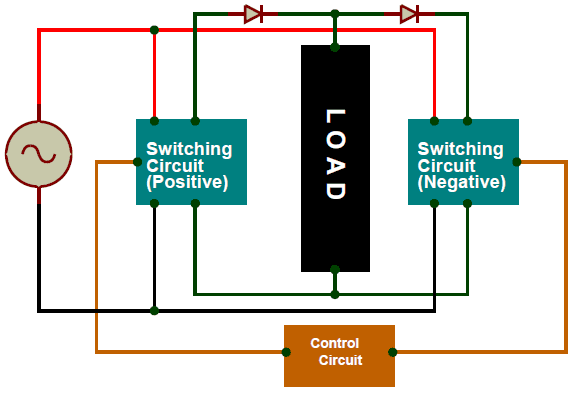 The bare minimum for a Cycloconverter is shown above. It will have a Switching circuit on either side of the Load, one circuit will function during the positive half cycle of the AC power source and the other circuit will function during the negative half cycle. Normally the switching circuit will be demonstrated using SCR as power electronic device, but in modern CCV you can find the SCR’s being replaced by IGBT’s and sometimes even MOSFETS. 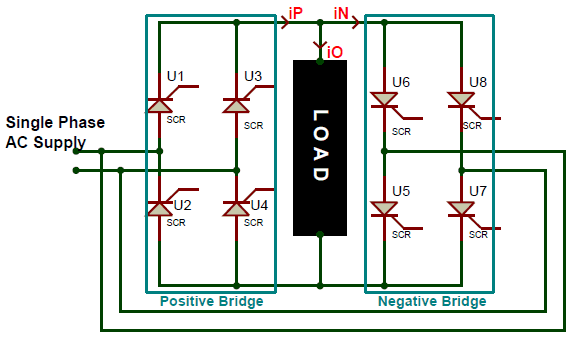 All the gate terminals of the SCR’s will be connected to a control circuit which is not shown in the circuit above. This control circuit will be responsible for triggering the SCRs. To understand the working of the circuit let us assume that he input AC supply is of 50Hz frequency and the Load to be a pure resistive load and the firing angle of the SCR (α) to be 0°. Since the firing angle is at 0° the SCR when turned on will act like a diode in forward direction and when turned off will act like a diode in reverse direction. Let us analyse the wave form below to understand how frequency is stepped down using a CCV 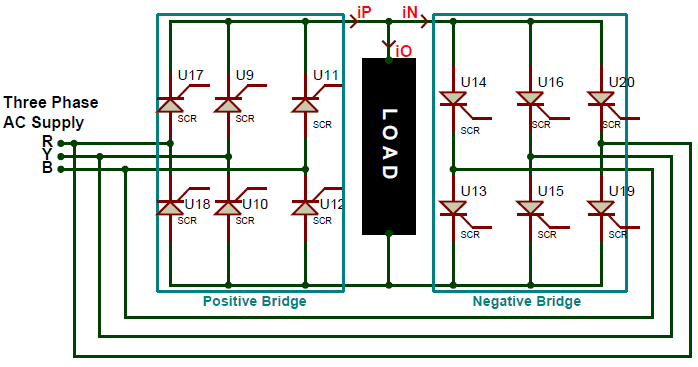 Again the gate terminals of the SCR will be connected to the control circuit for triggering them and the same assumptions are made again to understand the working easily. Also there are two kinds of Three Phase to Single Phase CCVs , the first type will have a half wave rectifier for both Positive and Negative Bridge and the second type will have a full-wave rectifier as shown above. The first type is not used often because of its poor efficiency. Also in a full-wave type both the bridge rectifiers can generate voltages in both the polarity, but the positive converter can supply current (source) only in the positive direction and the negative converter can drain current only in negative direction. This allows the CCV to operate in four Quadrants. These four quadrants are (+V, +i) and (-V, -i) in rectification mode and (+V, -i) and (-V,-i) in inversion mode.

Here we have six sets of Rectifiers of which two is allocated for each phase. The working of this CCV is similar to single phase CCV except here the rectifiers can rectify only half the wave and the same happens for all the three phases

Cycloconverters have a large set of industrial application, the following are the few