AC Circuit Theory: What is AC and How its Generated

An electrical circuit is a complete conductive path through which electrons flow from the source to the load and back to the source. The direction and magnitude of the electrons flow however depend on the kind of source. In Electrical Engineering, there are basically two types of voltage or current (Electrical Energy) source which defines the kind of circuit and they are; Alternating Current (or voltage) and Direct Current.

The Alternating circuit came into being in the 1980s when Tesla decided to solve the long range incapability of the Thomas Edison’s DC generators. He sought a way of transferring electricity at a high voltage and then employ the use of transformers to step it either up or down as may be needed for distribution and was thus able to minimize power loss across a great distance which was the main problem of Direct Current at the time.

AC and DC differ in several ways from generation to transmission, and distribution, but for the sake of simplicity, we will keep the comparison to their characteristics for this post.

The major difference between the AC and DC, which is also the cause of their different characteristics, is the direction of flow of electric energy. In DC, Electrons flow steadily in a single direction or forward, while in AC, electrons alternate their direction of flow in periodic intervals. This also leads to alternation in the voltage level as it switches along from positive to negative in line with the current. 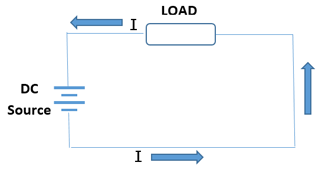 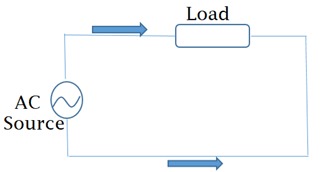 Below is a comparison chart to highlight some of the difference between AC and DC. Other differences will be highlighted as we go more into exploring Alternating current Circuits.

The simplest form of AC generator consists of a loop of wire that is mechanically rotated about an axis while positioned between the north and south poles of a magnet.

Consider the Image below. 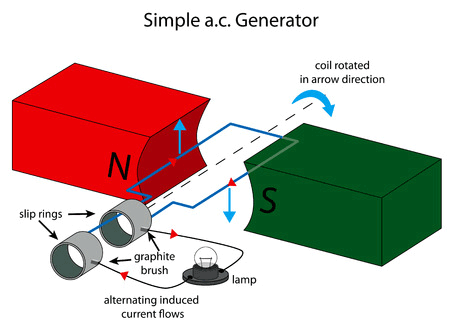 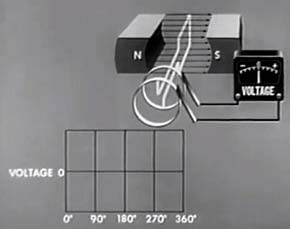 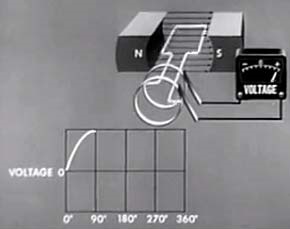 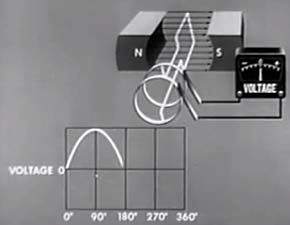 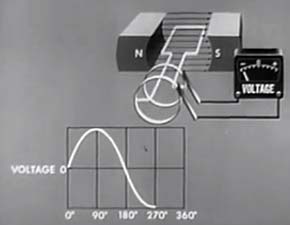 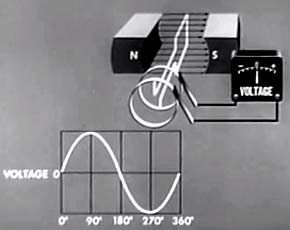 The Induced current in the setup above is giving by the equation:

Real AC generators are obviously more complex than this but they work based on the same principles and laws of electromagnetic induction as described above. Alternating current is also generated using certain kind of transducers and oscillator circuits as found in inverters.

The induction principles on which AC is based is not limited to its generation only but also in its transmission and distribution. As at the time when AC came into reckoning, one of the main issues was the fact that DC couldn’t be transmitted over a long distance, thus one of the main issues, AC had to be solved to become viable, was to be able to safely deliver the high voltages (KVs) generated to consumers who use a voltages in the V range and not KV.  This is one of the reasons why the transformer is described as one of the major enablers of AC and its important to talk about it.

In transformers, two coils are wired in such a way that when an Alternating current is applied in one, it induces voltage in the other. Transformers are devices which are used to either step down or step up voltage applied at one end (Primary Coil) to produce a lower or higher voltage respectively at the other end (Secondary Coil) of the transformer.  The Induced voltage in the secondary coil is always equal to the voltage applied at the primary multiplied by the ratio of the number of turns on the secondary coil to the primary coil.

Transformers has made the distribution of electric power over long range very possible, cost-effective and practical. To reduce losses during transmission, electric power is transmitted from generating stations at high voltage and low current and are then distributed to homes and offices at low voltages and high currents with the aid of transformers.

So we will stop here so as not to overload the article with too much information. In part two of this article, we will be discussing AC waveforms and get into some equations and calculations. Stay tuned.