What is Thyristor and How it works?

In general, Thyristors are also switching devices similar to the transistors. As we already discussed, Transistors are the tiny electronic component that changed the world, today we can find them in every electronic device like TVs, mobiles, laptops, calculators, earphones etc. They are adaptable and versatile, but it doesn’t mean that they can be used in every application, we can use them as amplifying and switching device but they cannot handle higher current, also a transistor required a continuous switching current. So, for all these issues and to overcome these problems we use Thyristors.

SCR or Thyristor is a four-layered, three-junction semiconductor switching device. It has three terminals anode, cathode, and gate. Thyristor is also a unidirectional device like a diode, which means it flows current only in one direction. It consists of three PN junction in series as it is of four layers. Gate terminal used to trigger the SCR by providing small voltage to this terminal, which we also called gate triggering method to turn ON the SCR. 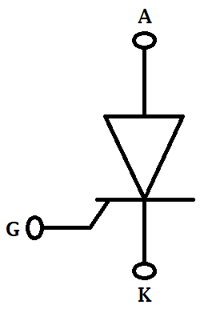 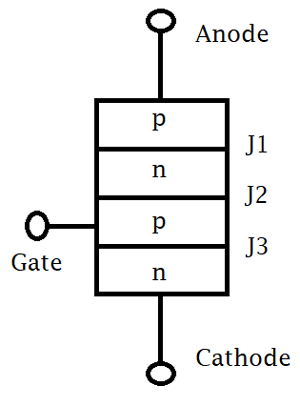 How Is Thyristor different from MOSFET?

There are some more differences between Thyristor and MOSFET are given below in table:

How is Thyristor Different from Transistor?

Thyristor and Transistor both are electrical switches but the power handling capacity of Thyristors are is far better than transistor. Due to having high rating of Thyristor, given in kilowatts, while of transistor power ranges in watts. A Thyristor is taken as a closed couple pair of transistors in analysis. The main difference between the transistor and Thyristor is, Transistor need continuous switching supply to remain ON but in case of Thyristor we need to trigger it once only and it remains ON. For applications like alarm circuit which need to trigger once and stay ON forever, cannot use transistor. So, to overcome these problems we use Thyristor.

There are some more differences between Thyristor and Transistor are given below in table:

V-I Characteristics of Thyristor or SCR 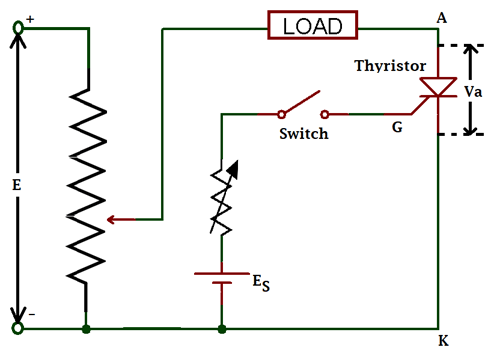 In this mode the cathode is made positive with respect to anode with switch S open. Junction J1 and J3 are reversed biased and J2 is forward biased. When reverse voltage applied across Thyristor (should be less than VBR), the device offers a high impedance in the reverse direction. Therefore, Thyristor treated as open switch in the reverse blocking mode. VBRis the reverse breakdown voltage where the avalanche occurs, if voltage exceeds VBR may cause to Thyristor damage. 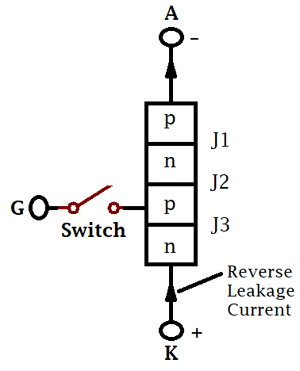 When anode is made positive with respect to cathode, with gate switch open. Thyristor is said to be forward biased, junction J1 and J3 are forward biased and J2 is reversed biased as you can see in figure. In this mode, a small current flows called forward leakage current, as the forward leakage current is small and not enough to trigger the SCR. Therefore, SCR is treated as open switch even in forward blocking mode. 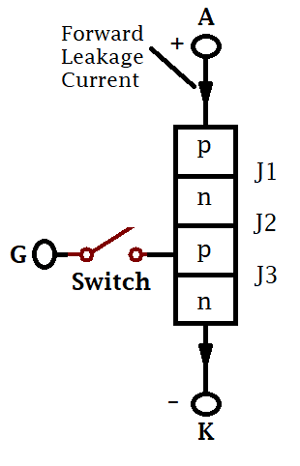 As the forward voltage is increased with gate circuit remain open, an avalanche occurs at junction J2 and SCR comes into conduction mode. We can turn ON the SCR at any moment by giving a positive gate pulse between gate and cathode or by a forward breakover voltage across anode and cathode of the Thyristor.

Triggering Methods of SCR or Thyristor

There are many methods to triggering the SCR like:

By applying forward voltage between anode and cathode, with keeping gate circuit open, junction J2 is reverse biased. As a result, the formation of depletion layer occurs across J2. As the forward voltage increases, a stage comes when depletion layer get vanishes, and J2 is said to have Avalanche Breakdown. Hence, Thyristor comes in conduction state. The voltage at which the avalanche occurs called as forward breakover voltage VBO.

It is one of the most common, reliable and efficient way to turning ON the Thyristor or SCR. In gate triggering, to turning ON an SCR, a positive voltage is applied between gate and cathode, which gives rise to the gate current and the charge gets injected into the inner P layer and forward breakover occurs. As higher the gate current will lower the forward breakover voltage.

As shown in figure there are three junction in a SCR, now for turning ON the SCR the junction J2 should breaks. By using gate triggering method, as the gate pulse applied the junction J2 breaks, junction J1 and J2 gets forward biased or the SCR comes in conduction state. Hence, it allows the current to flow through anode to cathode.

As per the two transistor model, when the anode is made positive with respect to cathode. Current will not flow through anode to cathode until the gate pin is triggered. When current flows into the gate pin it turns ON the lower transistor. As lower transistor conduct, it turns ON the upper transistor. This is a kind internal positive feedback, so by providing pulse at gate for one time, made the Thyristor to stay in ON condition. When both the transistor turns ON current start conducting through anode to cathode. This state is known as forward conducting and this is how a transistor “latches” or stays permanently ON.For turning OFF the SCR, you cannot off it just by removing gate current, at this state Thyristor get independent of gate current. So, for turning OFF you have to make switching OFF circuit.

In reverse biased junction J2 acquires the characteristic like capacitor because of presence of charge across the junction, means junction J2 behaves like a capacitance. If the forward voltage is applied suddenly, a charging current through the junction capacitance Cj lead to turn ON the SCR.

The charging current iC is given by;

For triggering a SCR with light, a recess (or hollow) is made inner p-layer as shown in figure below. The beam of light of particular wavelength is directed by optical fibres for irradiation. As, the intensity of the light exceeds to a certain value, SCR get turn ON. These type of SCR called as Light Activated SCR (LASCR). Sometimes, these SCR triggered using both light source and gate signal in combination. High gate current and lower light intensity required to turn ON the SCR. 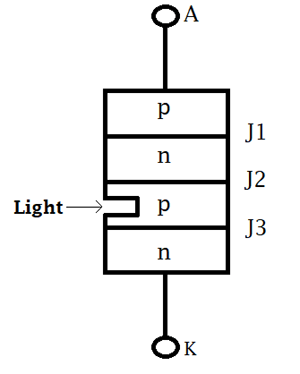 This should have been spelled checked, and checked for proper use of certain words. it made for slow reading, trying to guess what you meant to say.. I many cases, I knew what you meant to say, because i knew the topic you are discussing. The information could have been organized better , as well. If you can't fix it because English is your second language, ask a friend to edit it for you.