In previous article we have seen about ADC conversion using STM32. In this tutorial, we will learn about PWM (Pulse Width Modulation) in STM32 and how can we control brightness of LED or speed of DC fan using PWM technique.

We know that there are two types of signal: Analog and Digital. Analog signals have voltages like (3V, 1V...etc) and digital signals have (1’ and 0’s). Sensors outputs are of analog signals and these analog signals are converted into digital using ADC, because microcontrollers only understand digital. After processing those ADC values, again the output needs to be converted into analog form to drive the analog devices. For that we use certain methods like PWM, Digital to Analog (DAC) converters etc.

What is PWM (Pulse with Modulation)?

PWM is a way to control the analog devices using digital value like controlling motor’s speed, brightness of a led etc. We know that motor and led works on analog signal. But the PWM doesn’t provide pure analog output, PWM looks like analog signal made by short pulses, which is provided by duty cycle.

Duty cycle of the PWM

The percentage of time in which the PWM signal remains HIGH (on time) is called as duty cycle. If the signal is always ON it is in 100% duty cycle and if it is always off it is 0% duty cycle.

STM32F103C8 has 15 PWM pins and 10 ADC pins. There are 7 timers and each PWM output is provided by a channel connected to 4 timers. It has 16-bit PWM resolution (216), that is counters and variables can be as large as 65535. With a 72MHz clock rate, a PWM output can have maximum period of about one millisecond. 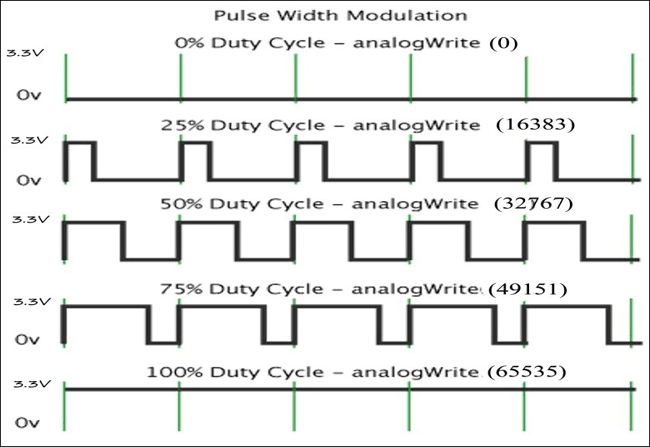 In this tutorial, we are using potentiometer and STM32 to vary the brightness of LED and speed of a DC fan by PWM technique. A 16x2 LCD is used to display ADC value (0-4095) and the modified variable (PWM value) that is output (0-65535).

DC Fan: The DC fan used here is BLDC fan from an old PC .It requires a external supply so we are using a 9V dc battery.

ULN2003 Motor Driver IC: It is used to drive the motor in one direction as the motor is unidirectional and also external power is required for fan. Learn more about ULN2003 based Motor Driver Circuit here. Below is the pic diagram of ULN2003: 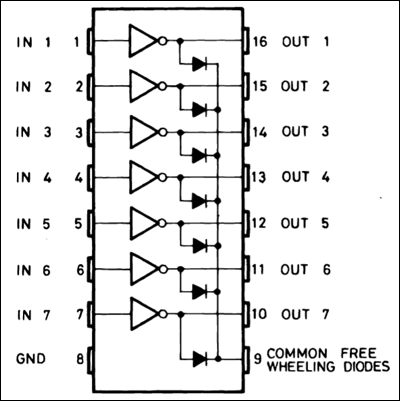 Pins (IN1 to IN7) are input pins and (OUT 1 to OUT 7) are corresponding output pins. COM is given Positive source voltage required for output devices.

LED: RED coloured led is used which emits RED light. Any colours can be used.

Potentiometers: Two potentiometers are used one is for voltage divider for analog input to ADC and another is for controlling brightness of led.

As we can see the PWM pins are indicated in wave format (~), there are 15 such pins, ADC pins are representd in green colour, 10 ADC pins are there which are used for analog inputs. 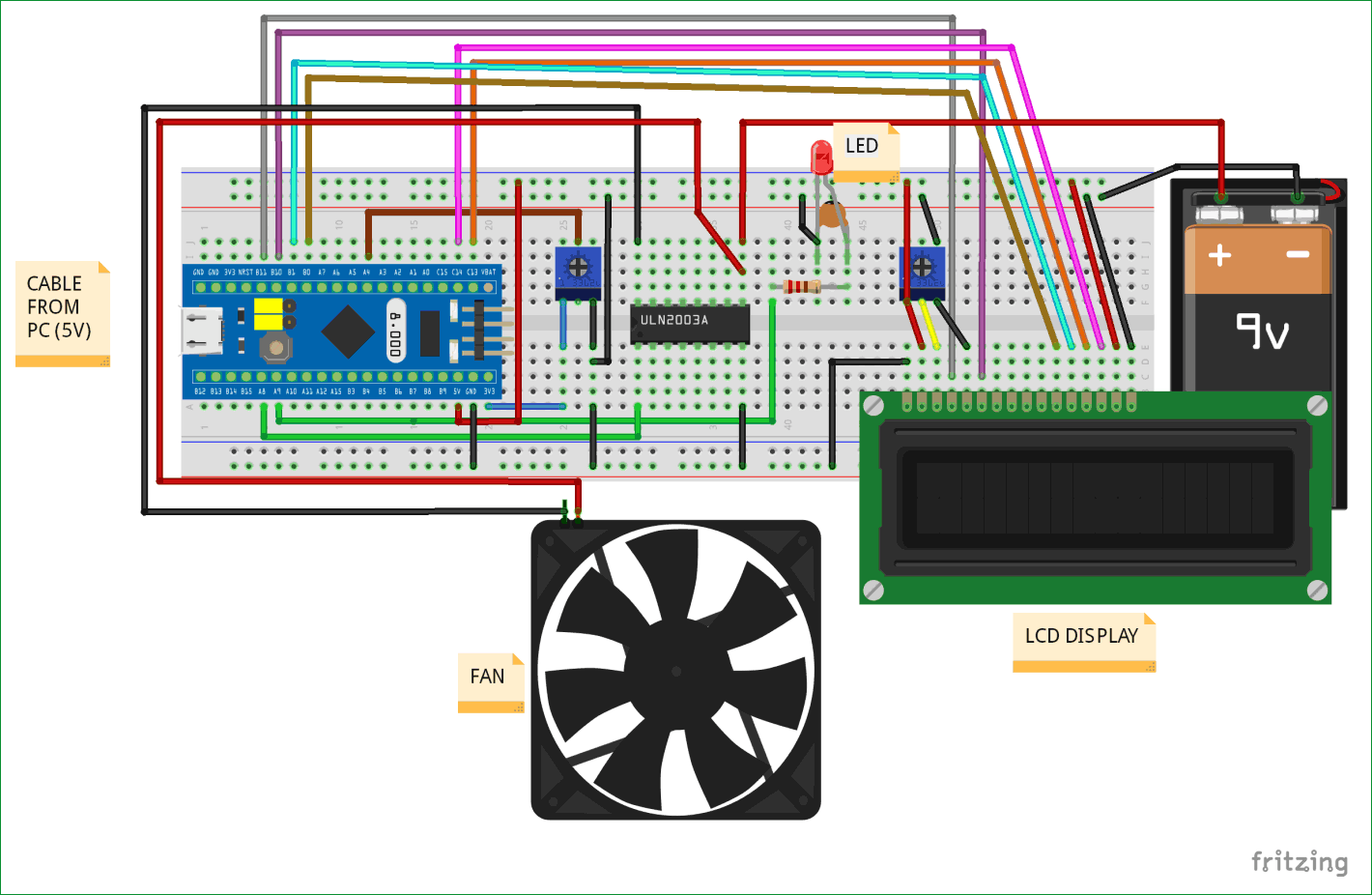 Connections of STM32 with various components are explained as below:

The STM32 PWM output pin (PA9) is connected to the positive pin of LED through a series resistor and a capacitor.

LED with Resistor and Capacitor

A resistor in series and a capacitor in parallel are connected with LED to generate correct Analog wave from PWM output as analog output is not in pure from when generated directly from PWM pin.

A potentiometer on the right side is used to control the contrast of the LCD display. The above table shows the connection between LCD and STM32. 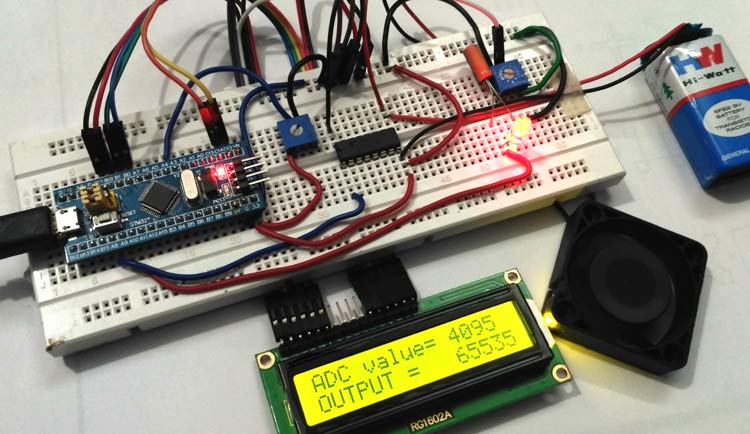 In this coding we are going to take a input analog value from ADC pin (PA4) which is connected to centre pin of left potentiometer and then convert the Analog value (0-3.3V) into digital or integer format (0-4095). This digital value is further provided as PWM output to control LED brightness and speed of DC fan. A 16x2 LCD is used to display ADC and mapped value (PWM output value).

First we need to include LCD header file, declare LCD pins and initialize them using below code. Learn more about interfacing LCD with STM32 here.

Now inside the setup(), we need to display some messages and clear them after few seconds and specify the INPUT pin and PWM output pins

Next in void loop() function, we read the Analog signal from the ADC pin (PA4) and store it in a integer variable that converts analog voltage into digital integer values (0-4095) by using below code int valueadc = analogRead(analoginput);

If mapping is not used we won’t get full speed of fan or full brightness of LED by varying the potentiometer.

Complete Code with a demonstration Video is given below.