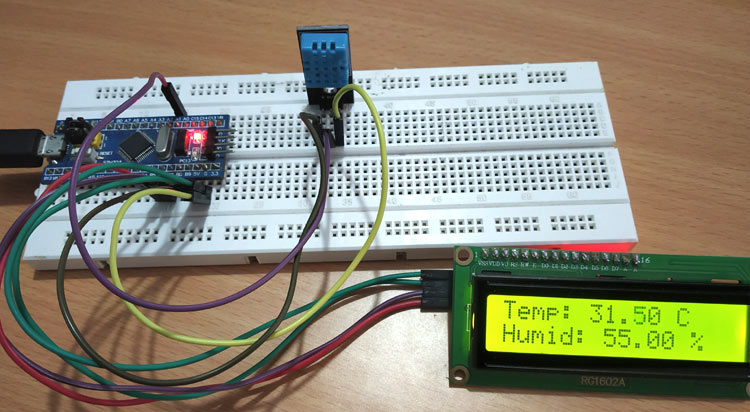 The sensor could measure the temperature from 0°C to 50°C with an accuracy of 1°C. It is commonly used in controlled environments such as Heat ventilation systems, temperature chambers etc to monitor temperature and take corrective measures. The measuring range of humidity is from 20% to 90% with an accuracy of 1%. Humidity indicates the amount of water vapor present in the air. The value of humidity has to be kept within a controlled range in many scenarios like in manufacturing and storing of tea powders the correct humidity must be maintained in the room or the tea will lose its taste and smell. The level of humidity in living rooms should also be maintained within a comfortable range. The ideal value of humidity for maximum comfort is between 50% to 65%.

Today in this tutorial we will learn how to interface the popular DHT11 Temperature and Humidity sensor with STM32 microcontroller. We have already learnt the basics of STM32 board and how to use it Arduino IDE. For those who are new, the STM32 a.k.a BluePill development board, consists of the STM32F103C8T6 microcontroller from ST Microelectronics. It is a 32-bit ARM Cortex M3 controller with high clock frequency suitable for high speed and power constraint application. Check all the STM32 related Tutorials here.

We interfaced DHT11 sensor with many other microcontrollers to build application like:

The complete circuit diagram to connect DHT11 with STM32 Microcontroller is shown below. The circuit was drawn using Fritzing software. 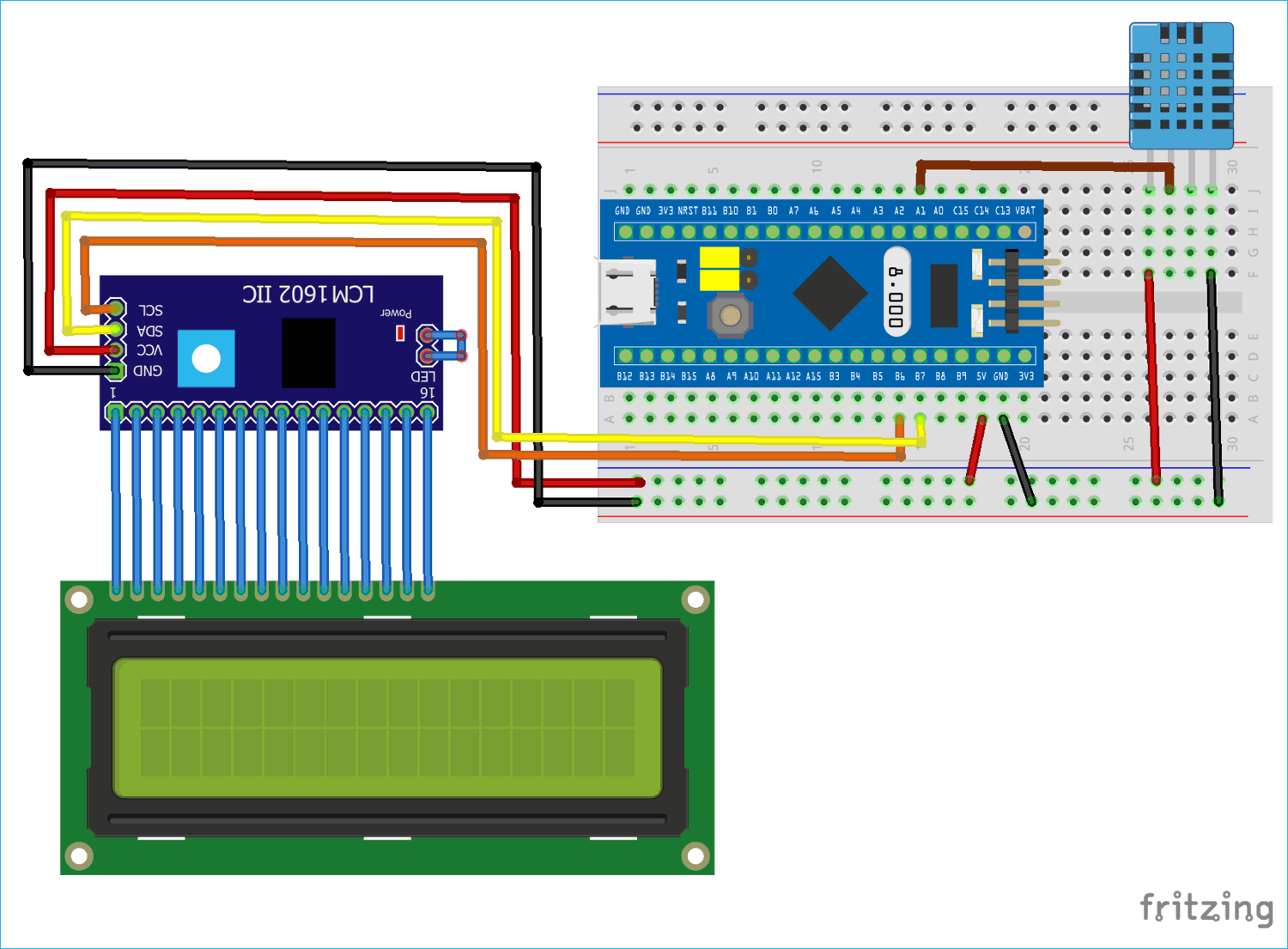 As you can see, we have used an I2C interface module to connect the LCD module to STM32. This makes the connections simple and further reduces the number of pins used on the controller side. However if you do not have this module you can also interface LCD directly STM32 by following the link.

If you have an interface module, then the circuit Connections between I2C Serial Interface Module (Fixed with 16X2 LCD Display) & STM32F103C8 is tabulated below:

Similarly the circuit Connections between STM32F103C8 and DHT11 Sensor is tabulated below.

Once the connections are done my hardware looks something like this below. 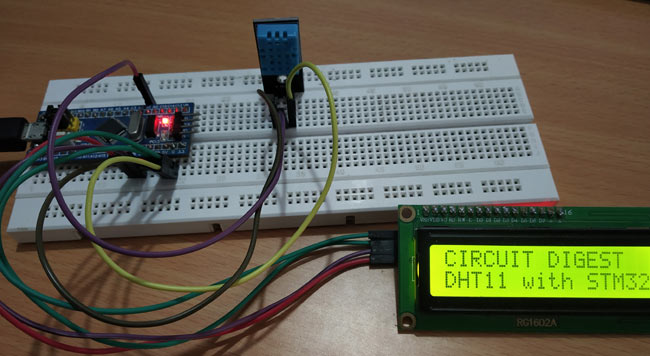 The entire set-up is powered by the USB port of STM32 from my laptop. Now that our hardware is ready, lets get into the coding part.

Preparing the Arduino IDE for STM32F103C8

We have to write a program to read the temperature and humidity value from the DHT11 senor and display it on the LCD module. Here the LCD display is connected through I2C adapter, hence we have first find the I2C address of this adapter to communicate with LCD.

Scanning the Address of the I2C Serial Interface Module:

Follow the below steps to find the I2C address of your LCD I2C interface module.

1. First check the STM32 package for Arduino IDE is installed. If not follow the link Programming your STM32 in ARDUINO IDE.

2. While installing packages for programming STM32 using Arduino IDE by above link the wire library is installed in default.

3.Program for scanning the I2C device connected is present in the examples (In Arduino IDE: Files->Examples->Wire->I2C scanner wire). Before that select the board in Tools->Board->Generic STM32F103C8 Series as shown below.

4. After then upload the code to the STM32F103C8 and the open serial monitor. 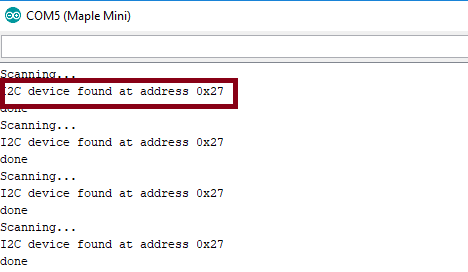 Similarly in order to read the serial data from DHT11 sensor we will use the DHT11 library. Download the library as a ZIP file using the link provided and after downloading, install DHT library in the Arduino IDE by using sketch->import library. Again the same library can also be used with Arduino boards.

The complete code for this article can be found at the bottom of this page, the explanation for the same is as follows. Initially include the required libraries. Include Wire.h library for using I2C in STM32F103C8, LiquidCrystal_I2C.h for using I2C type LCD display and DHT.h for using DHT sensor functions

And also, the DHTTYPE is defined as DHT11.

Next the object lcd for class LiquidCrystal_I2C with I2C address of 0x27 and 16x2 type LCD display is initialized.

And also, object dht for class DHT with DHT pin with STM32 and DHT type as DHT11 is initialized

And then use below statement to begin to receive Temperature and humidity values from DHT11 sensor.

Turn on the blacklight and print a welcome message and clear them after three seconds.

Next in the void loop():

The value is received from the DHT11 sensor continuously. In order to get the separate values of temperature and humidity and store it in a variable following statement is used.

To get only the Humidity value

To get only the Temperature value

And finally print those in the 16X2 LCD display

Working of STM32 based Thermometer

If your displays shows nothing you can check adjusting the contrast potentiometer at the back of the I2C module. I tried varying my room temperature using an Air conditioner and found the sensor value to also vary accordingly. The AC also has an option to measure room temperature and as you can see in below image my remote displays the room temperature to be 27°C and our sensors also displays 27.3°C on the LCD which is pretty much close. 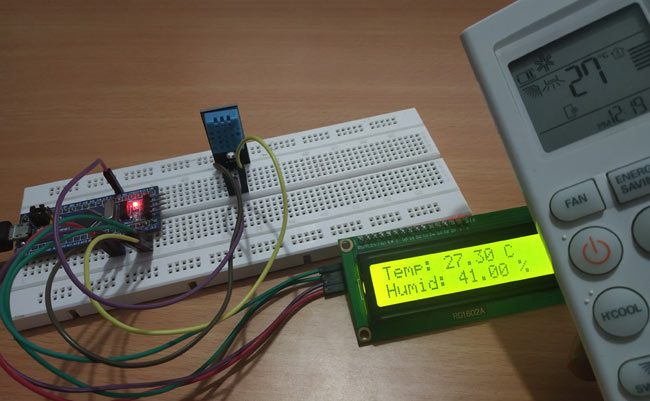 The complete working of the project can be found in the video linked at the bottom of this page. Hope you understood the project and enjoyed building it. If you have any problem in getting it to work, leave a comment below or use the forums for other technical quires.

Hello Mr. Thangavel, how are you?

I'm trying to obtain the I2C address, but I didin't get. I followed the instructions in the link https://circuitdigest.com/microcontroller-projects/programming-stm32f10…, but I didn't get success, because the serial monitor doesn't show any character. Can you help me with a technical support?