Getting started with PIC Microcontroller: Introduction to PIC Architecture and MPLABX

PIC microcontroller is very convenient choice to get started with a microcontroller projects, because it has excellent support forums and will act as a strong base to build upon all your advanced Microcontrollers that you are yet to learn.

These tutorials are made for absolute or intermediate Learners; we have planned to start with the most basic projects to the advanced ones. We expect no pre-requisites from the learners as we are here to help you out from any level. Every tutorial will have a theoretical explanation and simulation followed by a hands-on tutorial.  These tutorials will not involve any development boards, we will make our own circuits using a perf board. So gear up, and make some time every week to enhance you with Microcontrollers.

Now let's get started with a Simple Introduction on PIC Microcontrollers and some software setups to get us running on our next tutorial. Check the Video at the end for installing and setup the MPLABX, XC8, Proteus and a quick unboxing of PICkit 3 programmer.

The PIC microcontroller was introduced by Microchip Technologies in the year 1993. Originally these PIC were developed to be a part of PDP (Programmed Data Processor) Computers and each peripheral devices of the computer were interfaced using this PIC microcontroller. Hence the PIC gets its name as for Peripheral Interface Controller. Later Microchip has developed a lot of PIC series IC's which can be used for any small application like a lighting application till the advanced one.

The PIC16F877A Microcontroller consists of an inbuilt CPU, I/O ports, memory organization, A/D converter, timers/counters, interrupts, serial communication, oscillator and CCP module which to gather makes the IC a powerful microcontroller for beginners to start with. The general block diagram of the PIC Architecture is shown below

The microcontroller has a CPU to perform Arithmetic operations, Logical decisions and Memory related operations. The CPU has to co-ordinate between the RAM and the other peripherals of the Microcontroller.

It consists of an ALU (Arithmetic Logic Unit), using which it performs the arithmetic operations and logical decisions.  A MU (Memory unit) is also present to store the instructions after they get executed. This MU decides the program size of our MC. It also consists of a CU (Control Unit) which acts as a communication bus between the CPU and other peripherals of the microcontroller. This helps in fetching the data after it gets processed in the specified registers.

A Random Access memory is the one which decides the speed of our microcontroller. The RAM consists of register banks within it, each of which is assigned a specific task. On the whole they can be classified into two types:

As the name suggests the GPR are used for general register functions like addition, subtraction etc. These operations are limited within 8-bit. All the registers under the GPR are user writable and readable. They do not have any functions on their own unless it is software specified.

Whereas the SFR is used to perform complicated special functions which also involves some 16-bit handling, their registers can only be read (R) and we cannot write (W) anything to them. So these registers have a predefined functions to perform, which are set at the time of manufacturing and they just display the result to us, using which we can perform some related operations.

Read only memory is the place where our program gets stored. This decides the maximum size of our program; hence it is also called as program memory. When the MCU is under operation, the program stored in the ROM is executed as per each instruction cycle. This memory unit can be used only while programming the PIC, during execution it becomes a read only memory.

EEPROM is another type of Memory Unit. In this memory unit values can be stored during program execution. The values stored here are only Electrically Erasable that is these values will be retained in the PIC even when the IC is turned off. They can be used as small memory space to store the executed values; however the memory space will be very less in turns of KB.

Flash memory is also Programmable Read Only Memory (PROM) in which we can read, write and erase the program thousands of times. Generally, the PIC microcontroller uses this type of ROM.

The term Bus is just a bunch of wires that connects the Input or Output Device with CPU and RAM.

Data bus is used to transfer or receives the data.

Address bus is used to transmit the memory address from the peripherals to the CPU. I/O pins are used to interface the external peripherals; UART and USART both serial communication protocols are used for interfacing serial devices like GSM, GPS, Bluetooth, IR , etc. 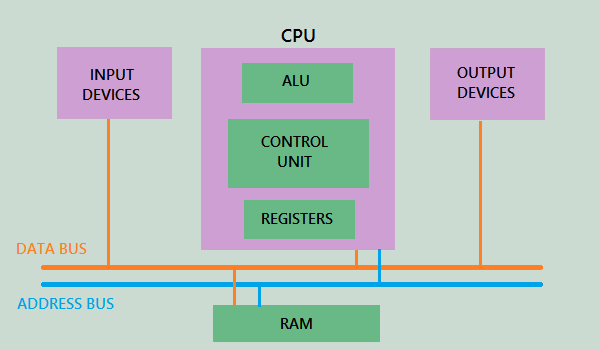 Selection of PIC Microcontroller for Our Tutorials:

PIC Microcontrollers from Microchip Company are divided into 4 large families. Each family has a variety of components that provide built-in special features:

Since we are starting to learn about PIC, let us select an IC which is used and available universally. This IC belongs to the 16F family the part number of the IC is PIC16F877A. From the first tutorial till the end we will be using the same IC as this IC is equipped with all advanced features like SPI, I2C, and UART etc. But if you don't get any of these things now it's completely fine, we will get progressed through every tutorial and finally uses all the above mentioned features.

Once the IC is selected, it is highly important to read the datasheet of the IC. This should be the first step in whatever concept that we are about to try. Now since we have selected this PIC16F877A lets read through the specification of this IC in the Datasheet.

The Peripheral Feature, mentions that it has 3 Timers, two of which are 8-bit and one is 16-bit prescaler. These Timers are used to create timing functions in our program. They can also be used as counters. It also shows that it has CCP (Capture Compare and PWM) options, which helps us to generate PWM signals and read the incoming frequency signals. For communication with external device, it has SPI, I2C, PSP and USART.   For safety purpose it is equipped with Brown-out Reset (BOR),  which helps in resetting the while program.

The Analog Features, Indicates that the IC has 10-bit 8-channel ADC. This means, our IC can convert Analog values to digital with a resolution of 10-bit, and has 8 analog pins to read them. We also have two internal comparators that can be used to compare the incoming voltage directly without actually reading them through the software.

The Special Microcontroller Features, signifies that it has 100,000 erase/write cycle, meaning you can program it for about 100,000 times. In-Circuit Serial Programming™ (ICSP™), helps us to program the IC directly using PICKIT3. Debugging can be made via In-Circuit Debug (ICD). Another safety feature is the Watchdog Timer (WDT), which is a self reliable timer that resets the whole program if required.

The below image represents the pinouts of our PIC16F877A IC. This image represents each pin against its name and its others features. This can also be found in the datasheet. Keep this image handy for it will help us during our hardware works. 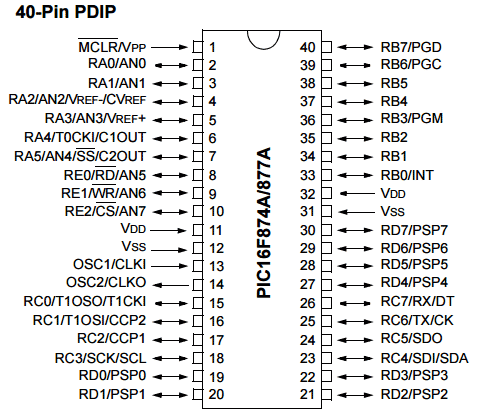 Selection of Software for Our Tutorials:

PIC microcontroller can be programmed with different software's that is available in the market. There are people who still use Assembly language to program PIC MCUs. For our tutorials we have selected the most advanced software and compiler that have been developed by Microchip itself.

In order to program the PIC microcontroller we will need an IDE (Integrated Development Environment), where the programming takes place. A compiler, where our program gets converted into MCU readable form called HEX files. An IPE (Integrated Programming Environment), which is used to dump our hex file into our PIC MCUs.

Microchip has given all these three software for free. They can be downloaded directly from their official page. I have also provided the link for your convenience. Once downloaded install them on your computer. If you have any problem doing so you can view the Video given at the end.

For Simulation purpose we have used software called PROTEUS 8, provided by Labcenter. This software can be used to simulate our code generated using the MPLABX. There is a free demonstration software which can be downloaded from their official page through the link.

Getting Ready with Hardware:

All our tutorials will end up with hardware. To learn PIC in the best way possible it is always recommended to test our codes and circuits over hardware, because the reliability of the simulation is very less. Codes which work on a simulation software, might not work as you expected on your hardware. Hence we will be building our own circuits on a Perf boards to dump our codes.

To dump or upload our code into PIC, we will need PICkit 3. The PICkit 3 programmer/debugger is a simple, low-cost in-circuit debugger that is controlled by a PC running MPLAB IDE (v8.20 or greater) software on a Windows platform. The PICkit 3 programmer/debugger is an integral part of the development engineer's tool suite. In addition to this we will also need other hardware like Perf board, Soldering station, PIC ICs, Crystal oscillators, capacitors etc. But we will add them to our list as we progress through our tutorials.

I brought my PICkit 3 from amazon, the unboxing video of the same can be found in the video below.  The link for PICKIT3 is also provided; the price may be a bit high but trust me it is worth investing. 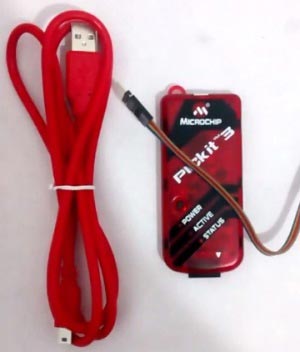