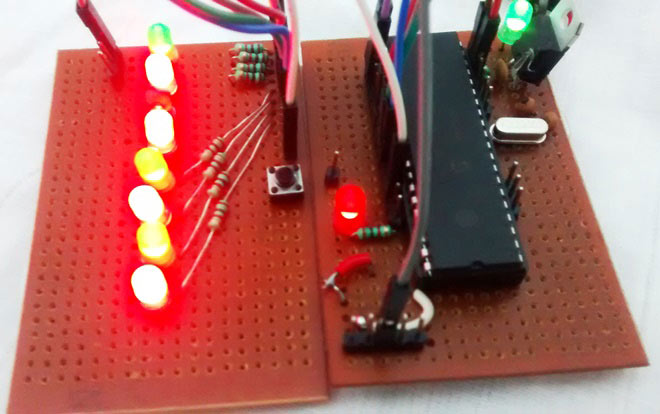 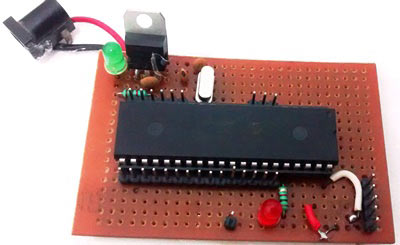 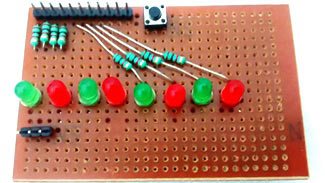 The LED board is nothing but another perf board, on which we will solder the LED's with a current limiting Resistor (shown below). We will also add a pushbutton to initiate the sequence LED blinking. 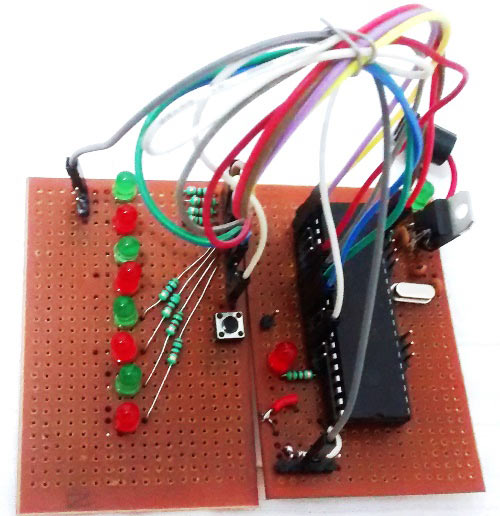 Complete Code has been given below (check at the end), here we will get it through line by line. This code will start to glow LEDs in a sequential manner when the push button is pressed. In order to understand the sequences please watch the video at the end of the tutorial. I would recommend you to compare the output shown in video with the code below and try to understand the program.

Let’s look at the code line by line. The first few lines are for setting up configuration bits which were explained in the previous tutorial so I am skipping them for now.  The best way to understand any program is to start from the main (void main ()) function, so let's do that

The word TRIS is used to define if the pin is being used as input/output and the word PORT is used to make a pin High/Low. The line TRISB0=1 will make the 0th pin of PORT B as input. This will be our pushbutton. The lines TRISD = 0x00; PORTD=0x00; will make all the pins of port D as Output and assign a initial value of LOW to those pins.

Since we said that B0 is used as input, we will connect one end of the pushbutton to the pin B0 and other end to the ground. By then whenever we press the button the pin will be held to ground as shown in the connection diagram above. But to make this happen we have to use a pull up resistor so that the pin will be held high when the button is not pressed. A pull up resistor is something like this.

But our PIC MCU has an internal weak pull up resistor which can be activated by software that way saving a lot of hassle (when more buttons are to be connected).

What is a Weak pull up resistor?

As shown the bit 7 deals with the weak pull up resistor. It should be made zero to activate it. This is done by OPTION_REG<7>=0. This specifically deals with the bit 7 leaving the other bits to its default values. With this we get into our while loop, where it checks if the button is pressed by using if (RB0==0). If the condition is satisfied we call our function with the parameters 1, 3, 7 and 15.

Why do we use functions?

Functions are used to reduce the number of lines in our code. This is what most of us would have known. But why do we need to reduce the number of lines, especially when it comes to MCU programming. The reason is the limited space in our Program memory. If we do not optimize the code properly we might run out of memory space. This will come handy when we write long pages of codes.

Now this line seems to be odd: PORTD = get << i. I will explain what is actually happening here.

Now when we pass value 3 in sblink(int get) function, so the function sblink(3) will be executed which makes the value of  ‘get’  as 0b00000011, hence the result on PORTD will be:

So now this time two LEDs will be turned on at any given time by using sblink(3). Similarly for sblink(7) and sblink(15), three and four LEDs will be ON in a sequence. Once this is complete we will make all the LED to be on using the line PORTD=0xFF. Check the Video below for full Demonstration.

Hope you have understood the code and thus have learnt how to use functions, ‘for’ and ‘while’ loop to get your desired outputs. Now you can tweak around the code to get your different sequence of LED blinking. Go ahead compile your code and dump it on your MCU and enjoy the output. You can use the comment section if you get stuck somewhere. I have also attached the simulation and program files here.

That's it for now in our next tutorial we will learn how to use PIC16F877A timers instead of using delay functions. You can browse all the PIC microcontroller tutorials here.

while(1) //Get into the Infinite While loop
{

HI, can you please help me to program PIC16F877A to light 3 leds one at a time the 4th push will put the 3 leds off using one button. I will be using 14 buttons and 42 leds. I know how to program the input and output ports and crystal osc. ect. please let me know if I can help with anything else. thank you Thys

Hi!
I'm trying to learn from your tutorials, and it worked until now.
I make things with 16F887 I/P and make with the appropriate setings in project, but the button sensing isn't working. I tried with another port, and with a real pull up resistor too.
Have you got any other suggestions?

Sounds odd, what do you mean

Sounds odd, what do you mean by not working? Did you use a multimeter to check the voltage at the pin?

Does your simulation work fine?

i want to make a circuit to

Use a multiple voltage