You must have seen automatic door openers in shopping malls and other commercial buildings. They open the door when someone comes near the entrance and close it after sometime. A number of technologies are available to make such kinds of systems like PIR sensors, Radar sensors,  Laser sensors, Infrared sensors, etc. In this arduino based project, we have tried to replicate the same system by using a PIR sensor.

It uses a motion-detecting sensor (PIR sensor) to open or close the door which detects the infrared energy omitted from human's body. When someone comes in front of the door, the infrared energy detected by the sensor changes and it triggers the sensor to open the door whenever someone approaches the door. The signal is further sent to arduino uno that controls the door.

The main component of PIR sensor is Pyroelectric sensor shown in figure (rectangular crystal behind the plastic cap). Along with BISS0001 ("Micro Power PIR Motion Detector IC"), some resistors, capacitors and other components used to build PIR sensor. BISS0001 IC take the input from sensor and does processing to make the output pin HIGH or LOW accordingly.

The concept used here for programming is very simple.  In program we have only used digital input output.

DigitalRead is used for reading output of PIR sensor.

After that, if PIR sensor senses any motion then program sends an command to open gate, stop gate, closing gate and stop gate. 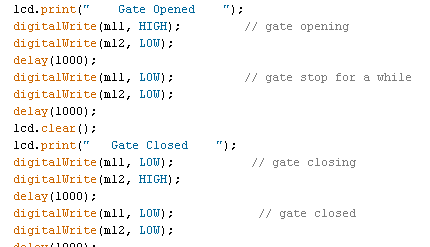 See below the complete code for arduino based automatic door opener.