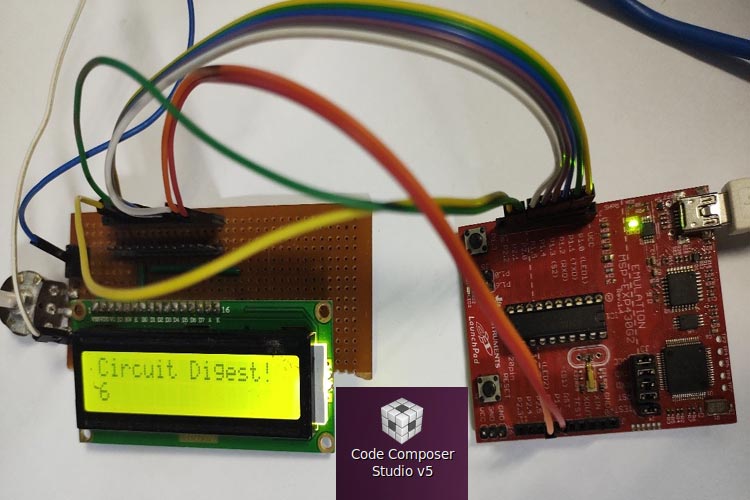 This article is the continuation of our tutorial series on programming MSP430 using Code Composer Studio. Last tutorial was based on external interrupts on MSP430 using GPIO pins. This tutorial is about interfacing a display with MSP430, when it comes to display the 16*2 LCD Display, it is the first choice for any electronic hobbyist. Previously we have also interfaced LCD with MSP430 using Arduino IDE, in this tutorial, we will use the native Code Composer studio platform instead of using the Arduino IDE, this way as a designer, we get more flexibility.

To learn more about 16x2 LCD display and using it with other microcontrollers, please see below tutorials.

It has an in-built IC hd44780 that can store the command and data passed to it. The LCD Module has about 16 pins. 8 of which are data pins, 4 of them are supply pins for backlight LED and the whole LCD module, 3 for controlling the operation, and 1 pin for contrast adjustment. The tutorial is based on the library created by Dennis Eichmann. It is very easy to use a library with separate functions to print different data types. It also has provisions to display the data in different forms with leading, blanked, and deleted zeroes. It is a pretty expansive and comprehensive library and is configurable to the different connections. Here, the header file is modified to accommodate an 8-pin parallel configuration for data communication.

A generic 16x2 Display has an inbuilt hd44780 IC (circled in red below), that can store the command and data passed to it. The LCD Module has about 16 pins. 8 of which are data pins, 4 of them are supply pins for backlight LED and the whole LCD module, 3 for controlling the operation, and 1 pin for contrast adjustment.

This LCD module is shown above versatile and uses minimum pins compared to other segmented LCDs. If you are curious to know how exactly all this works, you should check out the working of the 16x2 LCD display where we have already discussed how the LCD works in detail. 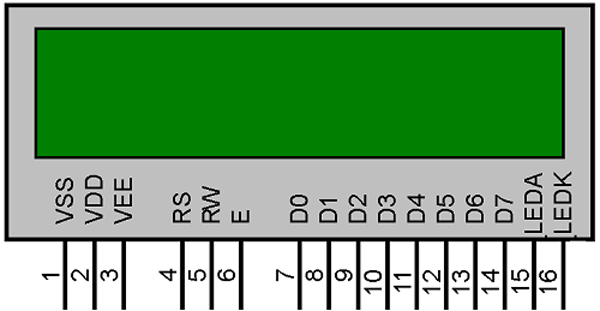 D0-D7 pins: The data is transferred to and from the command and data registers through these pins.

The tutorial is based on the library created by Dennis Eichmann. It is very easy to use a library with separate functions to print different data types. It also has provisions to display the data in different forms with leading, blanked, and deleted zeroes. It is a pretty expansive and comprehensive library and is configurable to the different connections. Here, the header file is modified to accommodate an 8-pin parallel configuration for data communication. The library can be download from the below link, after downloading you follow the below steps to add the library to CCS.

A default CCS project is created using the file menu. In the Create Project dialog box, select the device and give hd44780 as a project name. Under the Project type and toolchain, select the output type as a Static library and create the project. 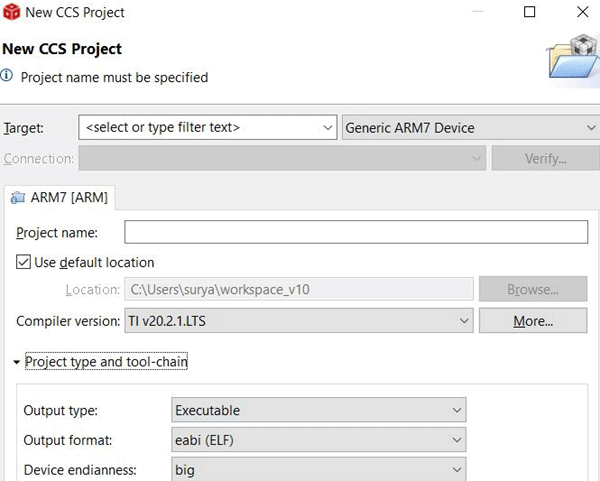 In the Project Explorer lane (left side), create a header file within the include folder and name it as hd44780.h. Then copy the contents of the downloaded hd44780.h file into this newly created one.

Now create the main project by changing the output type to an executable and create a project named CCS_LCD.

Step 2: Include the Search Paths to the Main Project

In the properties dialog box of the hd44780 project and inside the include options for the MSP430 compiler, add the include folder in file the search path. 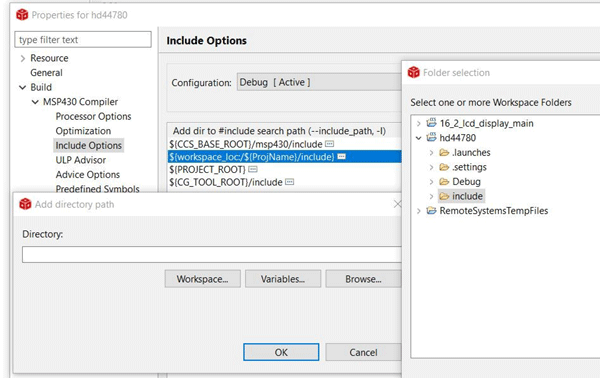 Then, build this project to create the necessary linker files such as .lib files. Building this will create hd44780.lib file inside the debug folder.

Step 3: Include the Search Paths for Linker

The include folder is again added to the include options of the MSP430 compiler of the CCS_LCD project. 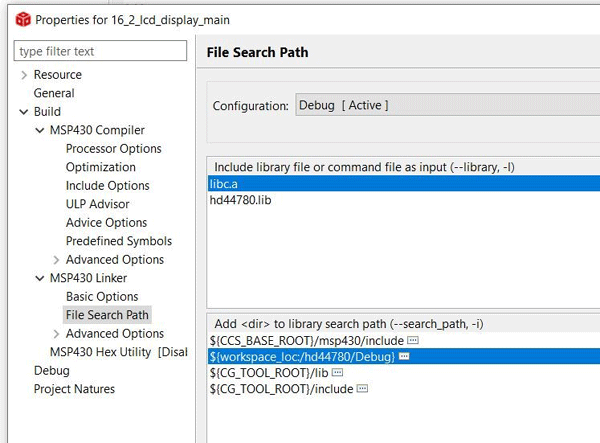 The library is successfully compiled and added to the linker of the main project.

void hd44780_timer_isr( void ): This is periodically called in the ISR of the Timer A. The Timer A is used to periodically do the LCD functions like clearing the screen, setting the cursor, and displaying the data. The function is to be used in the ISR. It returns nothing.

uint8_t u8__row: It defines the row in which the string will be written.

uint8_t u8__column: It defines the column in which the string will be written.

void hd44780_clear_screen( void ): This function will clear the whole screen. It returns nothing.

uint16_t u16__value: The integer to be displayed is given in the first argument.

uint8_t u8__row: The row in which the integer is displayed is selected.

uint8_t u8__column: The column to be printed is selected using the argument.

The complete circuit diagram is illustrated in the below image. As you can see, the hardware connections are very simple and we have powered the complete board by using a 5V adapter. 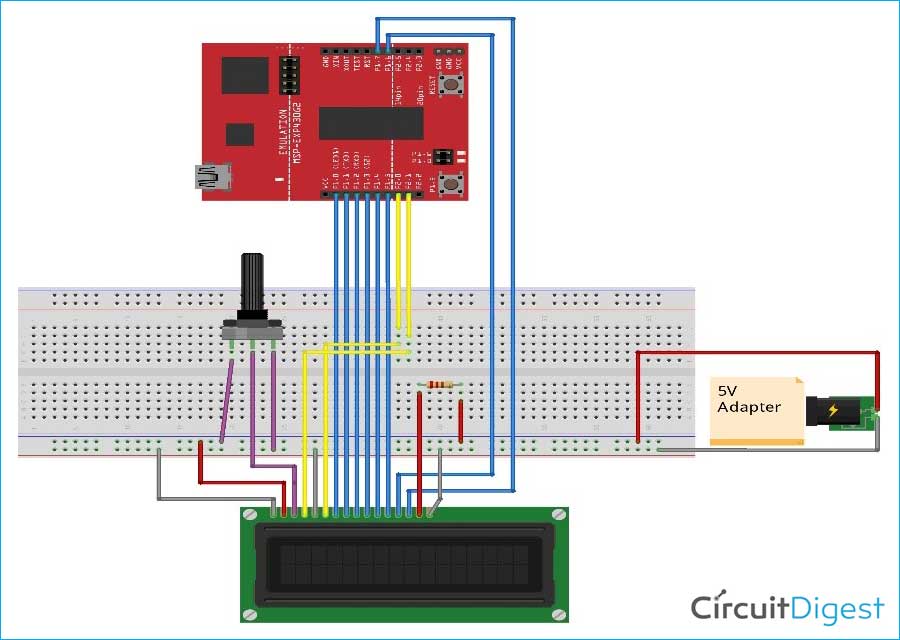 The connections are made as per the above sketch. Please look into the below table for the detailed connections.

The anode of the LED backlight cannot be connected directly to a 5V supply. It should be connected to a resistance to minimize the current flow through the LCD Module. I have made my connections using a perf board to solder the LCD and then used jumper wires to connect the LCD with the MSP430 board, my set-up looks like this below but you can also simply use a breadboard to make your connections.

The complete code used in this project is given at the bottom of this page. The explanation of using the code is as follows. First, open the header file (hd44780.h) and include the microcontroller part number in the first part of the file.

The watchdog timer has to be stopped first. DCOCTL and BCSCTL1 control registers are used to configure the oscillator of the microcontroller. The lines below will configure the MCLK to be 1MHZ.

Inbuilt timer is being used to display values periodically. Timer A is selected with SMCLK (1MHZ) as the clock source and continuous mode being the mode of operation.

The interrupts for the compare channels 1 and 2 and timer overflow interrupt share the same interrupt vector (TIMER0_A1_VECTOR) with different starting addresses. Capture compare channel 1 (CCR1) uses 2 as the address, which is being used in the switch case.

Once you have your code compiled, you can upload it to the MSP430 board, as explained in the getting started with the MSP430 tutorial. If everything goes as expected, you should see your LCD display some contrast as shown below. 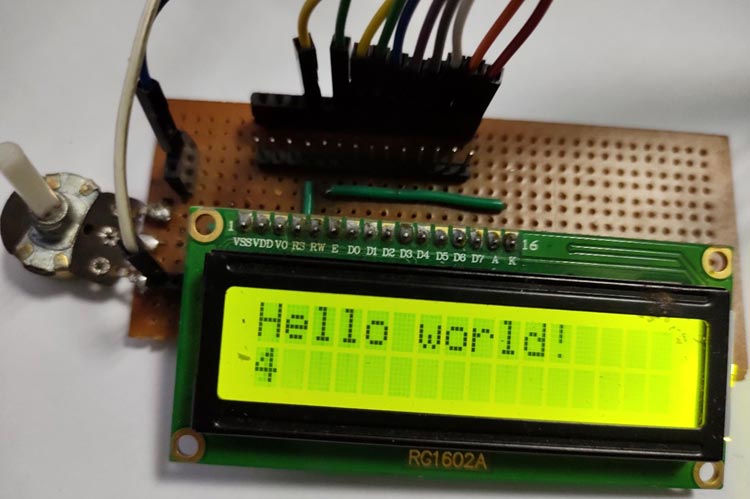 If your test is very dim, you can try adjusting the potentiometer to get better contrast. The complete working of the project can also be found in the video linked below. Hope you enjoyed the project and found it interesting to build your own. If you have any questions, please leave them in the comment section below. You can also write all your technical questions on forums to get them answered or to start a discussion.