Choosing a communication protocol for communication between microcontrollers and peripheral devices is an important part of embedded system. It is important because the overall performance of any embedded application depends on communication means as it is related to cost reduction, faster data transfer, long distance coverage etc.

In this tutorial, we will learn about RS-485 Serial communication between two Arduinos and then demonstrate it by controlling the brightness of the LED connected to a Slave Arduino from Master Arduino by sending ADC values through RS-485 Module. A 10k potentiometer is used to vary the ADC values at Master Arduino.

Let’s start by understanding the working of RS-485 Serial communication.

RS-485 is an asynchronous serial communication protocol which doesn’t require clock pulse. It uses a technique called differential signal to transfer binary data from one device to another.

So what is this differential signal transfer method??

By using this method

For using RS-485 in Arduino, a module called 5V MAX485 TTL to RS485 which is based on Maxim MAX485 IC is needed as it allows serial communication over long distance of 1200 meters and it is bidirectional. In half duplex mode it has a data transfer rate of 2. 5Mbps.

5V MAX485 TTL to RS485 module requires a voltage of 5V and uses 5V logic levels so that it can be interfaced with hardware serial ports of microcontrollers like Arduino.

It has following features:

This RS-485 module can be easily interfaced with Arduino. Let’s use the hardware serial ports of Arduino 0 (RX) and 1(TX) (In UNO, NANO). Programming is also simple just use the Serial.print() to write to RS-485 and Serial.Read() to read from RS-485.

In this tutorial Arduino Uno is used as Master and Arduino Nano is used as Slave. Two Arduino Boards are used here so two RS-485 Modules are required. 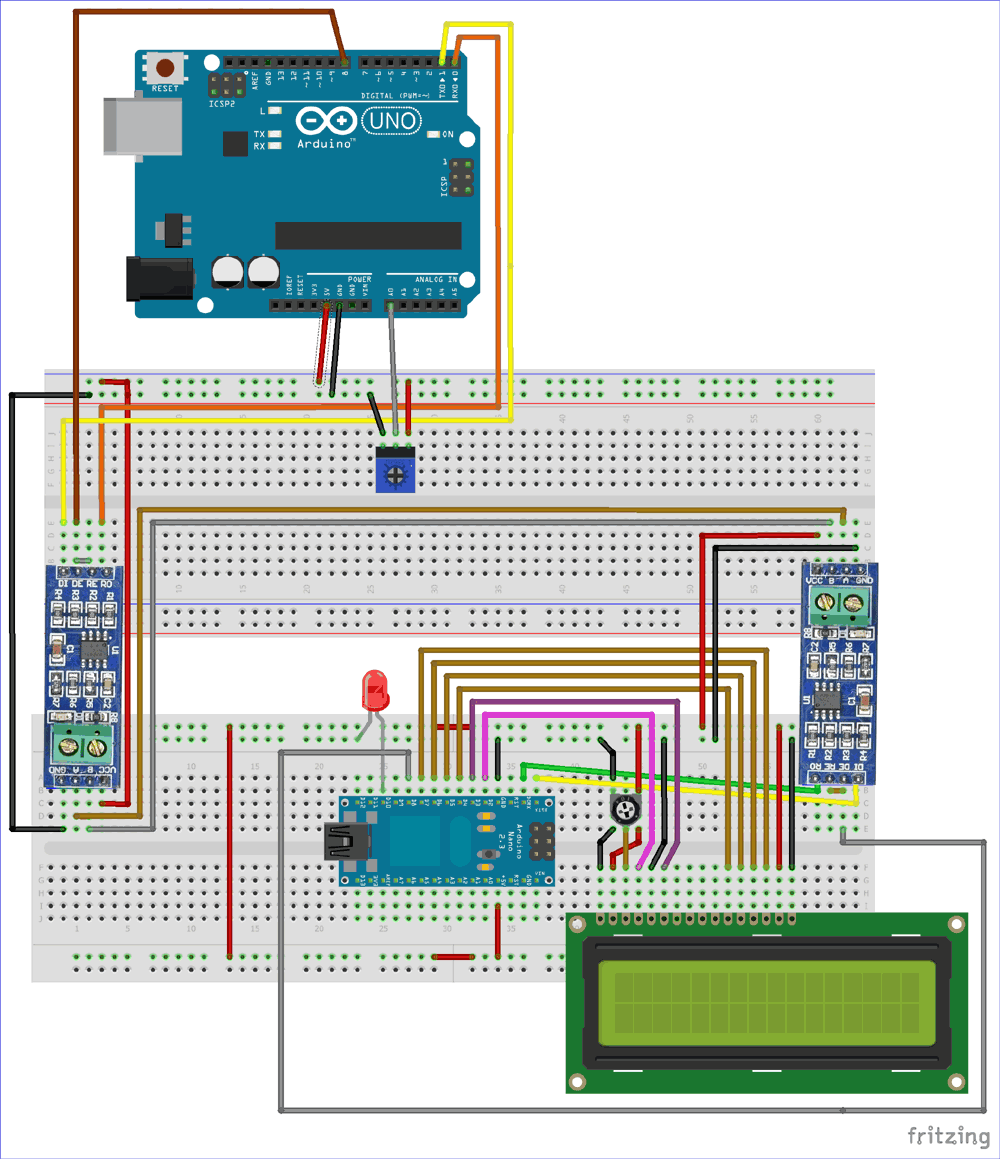 Circuit Connection between a 16x2 LCD and Arduino Nano:

For programming both boards Arduino IDE is used. But make sure you have selected the corresponding PORT from Tools->Port and Board from Tools->Board.

Complete code with a Demo Video is given at the end of this tutorial. Here we are explaining important part of the code. There are two programs in this tutorial, one for Arduino UNO (Master) and other for Arduino Nano (Slave).

In the Master side, just simply take Analog input at pin A0 by varying the potentiometer and then SerialWrite those values to the RS-485 bus through the Hardware Serial Ports (0,1) of Arduino UNO.

To Begin Serial Communication at Hardware Serial Pins (0,1) use:

To read Analog value at the pin A0 of Arduino UNO and store them in a variable potval use:

Before writing the potval value to serial port, pins DE & RE of RS-485 should be HIGH that is connected to the pin 8 of Arduino UNO so to Make pin 8 HIGH:

Next to put those values in the Serial Port connected with the RS-485 module, use the following statement

In the Slave side an integer value is received from the Master RS-485 that is available at the Hardware Serial port of the Arduino Nano (Pins -0,1). Simply read those value and store in a variable. The values are in form of (0 -1023). So it is converted into (0-255) as PWM technique is used to control LED brightness.

Then AnalogWrite those converted value to the LED pin D10 (It’s a PWM pin). So depending upon the PWM value the brightness of the LED changes and also display those values in 16x2 LCD display.

In order for the Slave Arduino‘s RS-485 to receive the values from the Master, just make the pins DE & RE of RS-485 LOW. So the pin D8 (enablePin) of Arduino NANO is made LOW.

Next write the analog value (PWM) to pin D10 where LED anode is connected:

To print those PWM value in 16x2 LCD display use

When the PWM value is set at 0 using potentiometer, the LED is turned OFF. 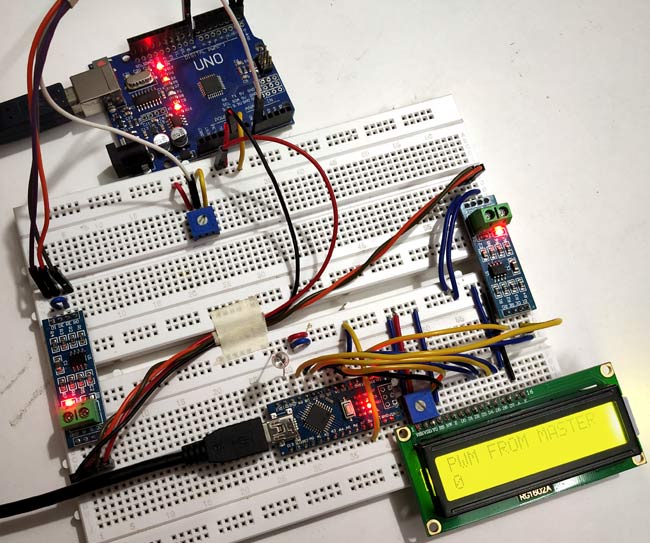 And when PWM value is set at 251 using potentiometer: The LED is turned ON with full brightness as shown in below picture: 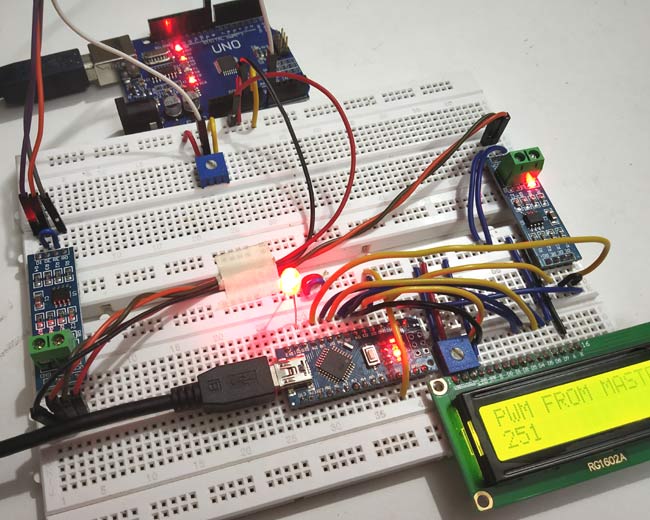 So this is how RS485 can be used for serial communication in Arduino.

#include <LiquidCrystal.h>          //Include LCD library for using LCD display functions