Choosing a communication protocol for communication between microcontrollers and peripheral devices is an important part of embedded system. It is important because the overall performance of any embedded application depends on communication means as it is related to cost reduction, faster data transfer, long distance coverage etc.

RS-485 is an asynchronous serial communication protocol which doesn’t not require clock. It uses a technique called differential signal to transfer binary data from one device to another.

So what is differential signal transfer method?

To connect the MAX485 TTL to RS-485 Converted Module to Raspberry Pi the following UART pins of Pi is used (GPIO14, GPIO15). 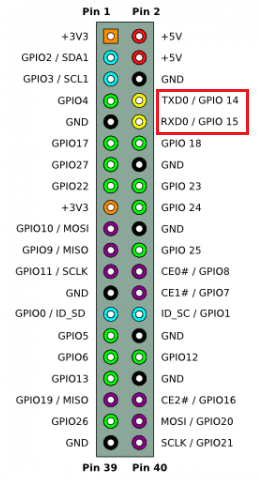 To connect the MAX485 TTL to RS-485 Converter Module to Arduino UNO the following UART pins of UNO is used (0,1). 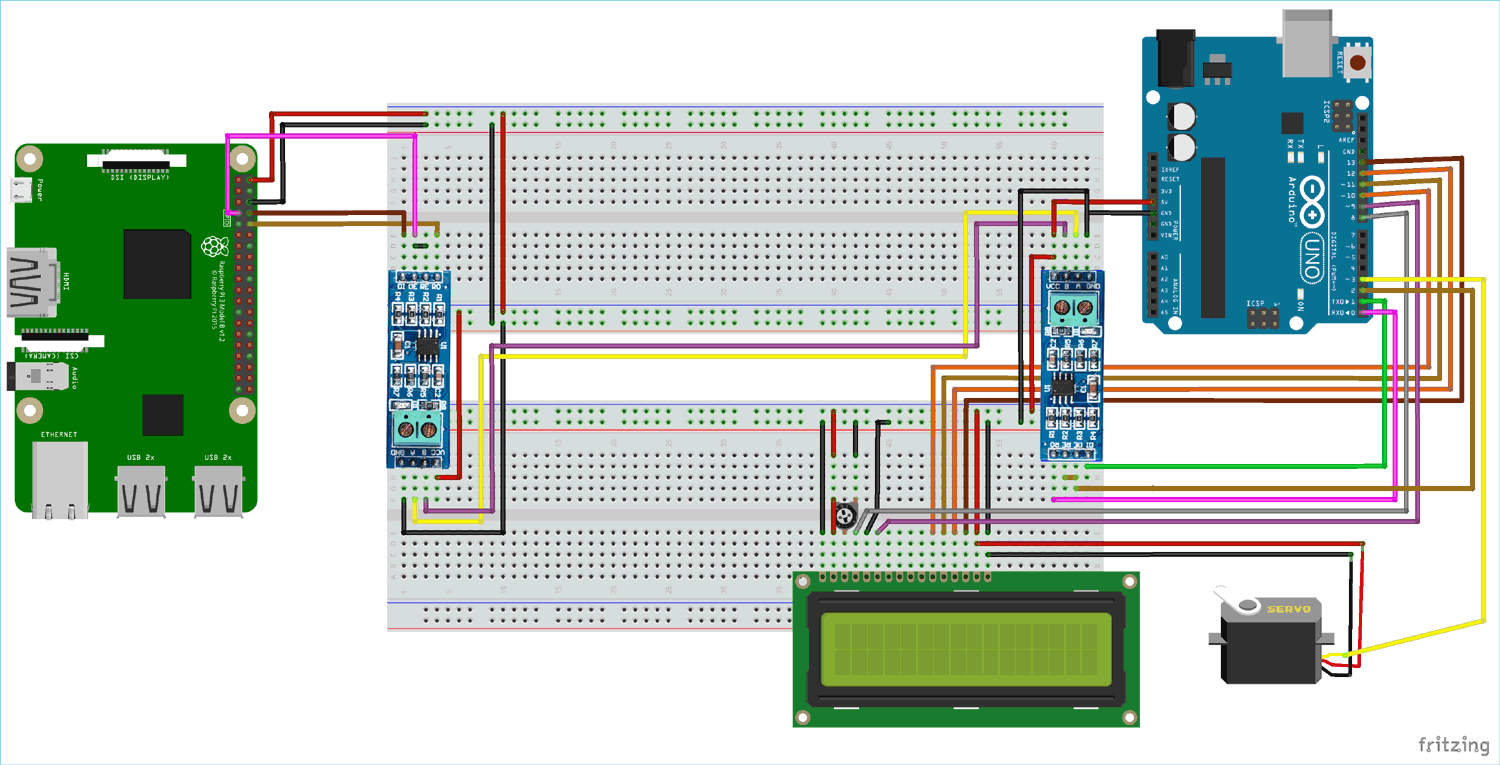 Circuit Connection between one RS-485 and Raspberry Pi 3 B+ (Master):

Circuit Connection between one RS-485 and Arduino UNO (Slave):

Circuit Connection between a 16x2 LCD and Arduino UNO:

This finishes all the necessary circuit connections between all components. Now start programming the Raspberry Pi and Arduino UNO with the Master and Slave code.

3. And then select serial

4. Then click on ‘No’ (This is used to disable Linux UART console) 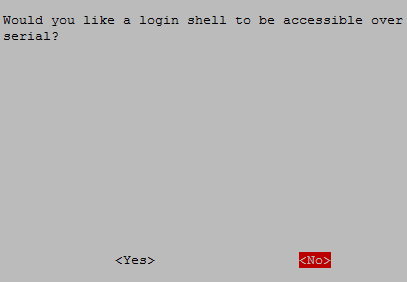 5. After that exit the raspi-config

Now Serial port is ready to be used.

IMPORTANT: Before writing values to the RS-485 module the pins DE & RE must be made HIGH.

So, let’s see in detail about Python coding at master side now.

Initially, all the libraries are imported for peripherals used. The libraries which are important here are time, serial(for serial communication), GPIO for accessing GPIO and sleep.

Below, GPIO.BOARD option specifies that you are referring to the pins by the number of pin in the board.

The variable ‘i’ with array of angle values is defined, these values will be sent via serial communication.

The function send.write(str(x)) sends the values to serial port to the RS-485 one by one written inside the while loop as it executes continuously. The values are sent with a delay of 1.5 seconds.

This finishes the code for Raspberry Pi which is acting as master in RS485 based serial communication.

At the Slave side which is Arduino UNO, the values are received from the Master. The servo motor connected to Arduino is rotated according to the value received, and also the value is displayed in LCD display. So, in Arduino programming LCD display library and Servo motor library used.

As the Slave RS-485 of Arduino UNO receives value, the pins DE & RE must be made LOW.

Just like for master we had several peripherals and included necessary libraries, similarly the slave side has peripherals such as servo motor and 16X2 LCD display, so start with including libraries for these peripherals.

Next the 16X2 LCD display pins that are to be used with the Arduino UNO are defined and then the Servo object is also created.

Initially a display message is displayed which can be changed according to the project and then it is cleared for next message.

The serial communication is started at baud rate of 9600.

As Arduino RS-485 receives value from master, so the pin 2 of (EnablePin) is made LOW to make it in input mode and also to make pin DE & RE of RS-485 LOW to read value from Master Raspberry Pi.

The Servo Motor PWM pin is connected to the Arduino PWM pin 3.

The while loop executes when there is a value available at serial port where RS485 module is connected.

The Serial.paseInt() function is used to receive the integer value (Angle) from serial port that is sent from Raspberry Pi

Write the received angle value to servo motor to rotate the servo motor shaft from (0 to 180).

And finally, the angle value is displayed in LCD display using the respective LCD functions.

This finishes the slave side programming. Also with uploading the codes in Raspberry Pi ad Arduino UNO, both the controllers are ready for a working demo. Complete code with a Demo Video is given at the end of this tutorial.

When circuit connections are complete and code is uploaded to Arduino UNO, then use terminal to run the python code in Raspberry Pi. The Angle value is sent from Raspberry Pi to Arduino Uno to control the Servo Motor angle via RS-485 Serial Communication. 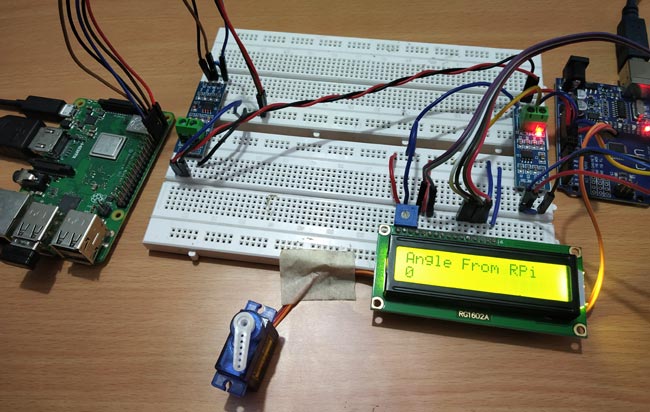 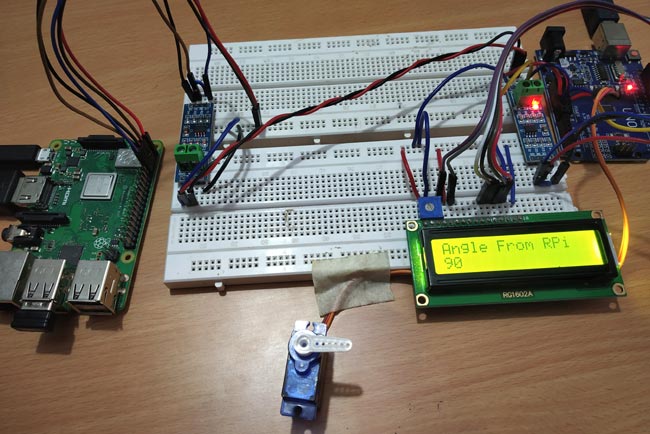 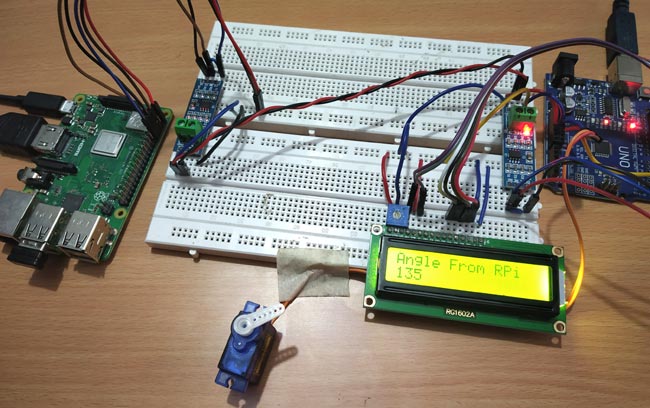 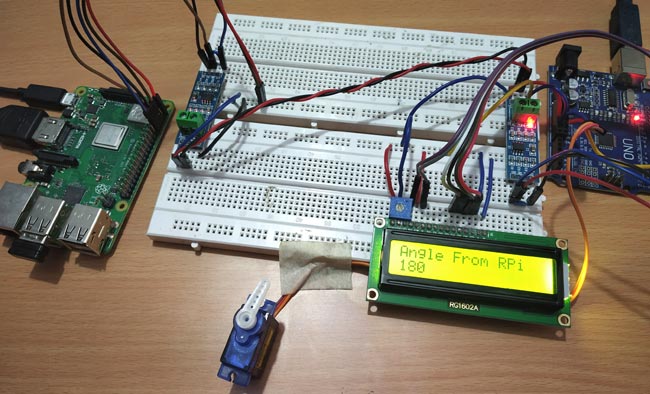 This finishes the complete tutorial on RS485 serial communication using Raspberry Pi. If you have any doubt or suggestions then please comment below.