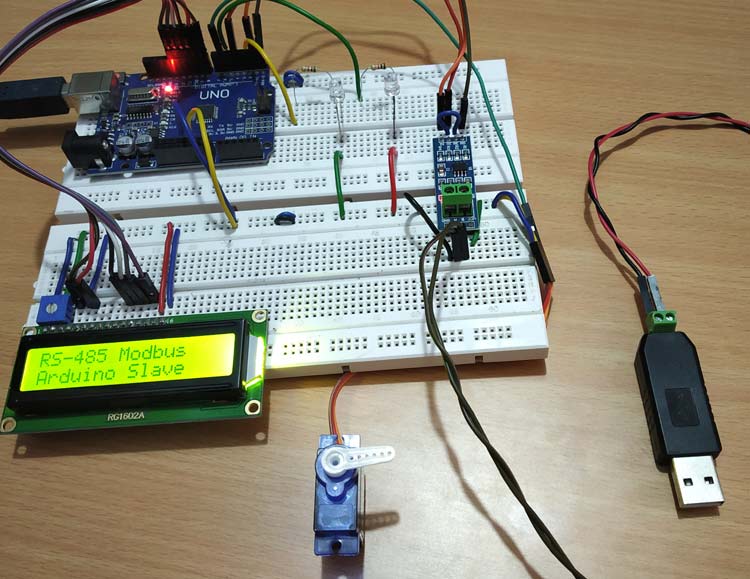 Modbus is a Serial Communication protocol which was discovered by Modicon in 1979 and it is used for transmitting data over serial lines between the industrial electronic devices. RS-485 Modbus uses RS-485 for transmission lines. It should be noted that Modbus is a software protocol and not a hardware protocol. It is divided into two parts such as Modbus Master and Modbus Slave. In RS-485 Modbus network there is one Master and 127 Slaves each with unique address from 1 to 127. In this MAX485 Arduino project, we will use Arduino Uno as Slave for serial communication.

Modbus are mostly used in PLCs (Programmable Logic Controllers). And apart from this, the Modbus is also used in Healthcare, Transportation, Home Automation etc. Modbus has 255 function codes and there are mainly three popular versions of Modbus:

What is the difference between Modbus ASCII and Modbus RTU?

Modbus RTU and Modbus ASCII talks the same protocol. The only difference is that the bytes being transmitted over the wire are presented as binary with RTU and as readable ASCII with Modbus RTU. Modbus RTU will be used in this tutorial.

This tutorial is about using RS-485 Modbus communication with Arduino UNO as Slave. Here we install Simply Modbus Master Software in PC and control two LEDs and Servo Motor by using RS-485 as transmission line. These LEDs and servo motor are connected with Slave Arduino and controlled by sending values using Master Modbus Software. Since this tutorial uses RS-485, it is recommended to first go through RS485 Serial Communication between Arduino Uno and Arduino Nano. RS485 can also be used with other controllers for serial communication:

Let’s begin by exploring some background about the RS-485 and Modbus. Also learn more about various Serial Communication protocols here.

RS-485 is an asynchronous serial communication protocol which doesn’t not require clock. It uses a technique called differential signal to transfer binary data from one device to another.

So what is this differential signal transfer method??

By using this method:

RS-485 Module can be connected to any microcontroller having serial port. For using RS-485 module with microcontrollers, a module called 5V MAX485 TTL to RS485 which is based on Maxim MAX485 IC is needed as it allows serial communication over long distance of 1200 meters. It is bidirectional and half duplex and has data transfer rate of   2.5 Mbps. This module requires a voltage of 5V. 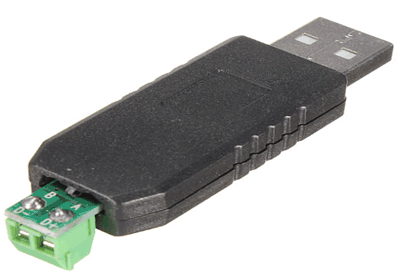 This is an USB to RS485 Converter Adapter module which supports WIN7, XP, Vista, Linux, Mac OS and provides an easy to use RS485 interface by means of using COM port in the computer. This module is plug-and-play device. There are no command structures, whatever is sent to the Virtual COM Port is automatically converted to RS485 and vice versa. The module is completely self-powered from the USB bus. So, no need of external power supply for operation.

It shows up as a Serial/COM port and is accessible from applications or hyper-terminal. This converter provides half-duplex RS-485 communication. The Baud rate range is 75 bps to 115200 bps, maximum up to 6 Mbps.

Before using the software, it is important to get familiar with the following terminologies.

Each slave in a network is assigned a unique unit address from 1 to 127. When the master requests data, the first byte it sends is the Slave address. This way each slave knows after the first byte whether or not to ignore the message.

The second byte sent by the Master is the Function code. This number tells the slave which table to access and whether to read from or write to the table.

CRC stands for Cyclic Redundancy check. It is two bytes added to the end of every Modbus message for error detection. 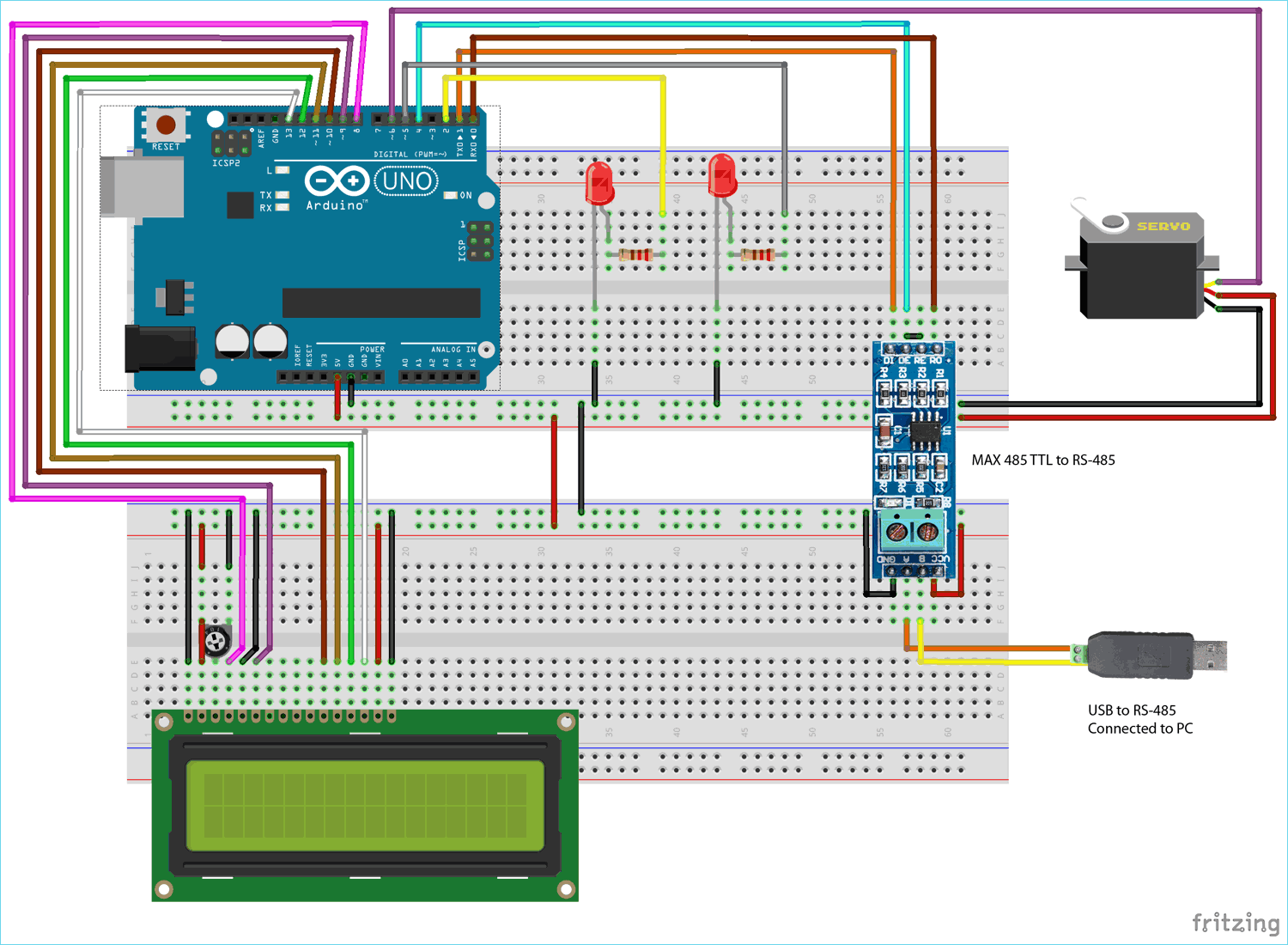 Circuit Connection between MAX-485 TTL to RS-485 Module and USB to RS-485 converter:

For using Modbus in Arduino UNO, a library <ModbusRtu.h> is used. This library is used for communicating with RS-485 Modbus Master or Slave via RTU protocol. Download the Modbus RTU  and add the library in the sketch by following Sketch->include library->Add .zip Library. Programming has some major steps which will be explained below.

Now the LED anode pins that are connected with Arduino pins 2 and 5 are defined as LED1 and LED2.

Next the object for accessing Liquid Crystal class is declared with the LCD pins (RS, E, D4, D5, D6, D7) that are connected with Arduino UNO.

Next for storing values for Modbus communication an array is declared with the three values initialized with zero.

In setup function, firstly the LCD is set in 16x2 mode and a welcome message is displayed and cleared.

After this, LED1 and LED2 pins are set as output pins.

The servo pulse pin connected to PWM pin 6 of Arduino is attached.

The Modbus slave is set at 9600 baudrate.

The loop starts with the definition of bus poll and bus.poll() is used to write and receive value from the master Modbus.

This method is used to check if there is any data available at the serial port.

If there is any data available at serial port the Modbus RTU library will check the message (check the device address, data length, and CRC) and perform the required action.

For example to write or read any value from master, the ModbusRTU must receive an unsigned 16-bit integer array and its length from the Master Modbus. This array carries the data that is written from the master.

In this tutorial there are three arrays for LED1, LED2 and Servo motor angle.

First to turn ON or OFF the LED1 modbus_array[0] is used.

Next to turn ON or OFF the LED2 modbus_array[1] is used.

Next to set the angle of the Servo motor the modbus_array[2] used and value is printed in the 16x2 LCD display.

This finishes programming Arduino UNO for working it as MODBUS Slave. The next step will be testing it as Modbus Slave.

After the circuit connections are completed and the code is uploaded to the Arduino UNO, its time to connect the USB to RS-485 module with the PC where the Simple Modbus Master software is installed.

Open the device manager and check the COM port according to your PC where the USB to RS-485 Module is connected and after that open the Simply Modbus Master 8.1.1 software. 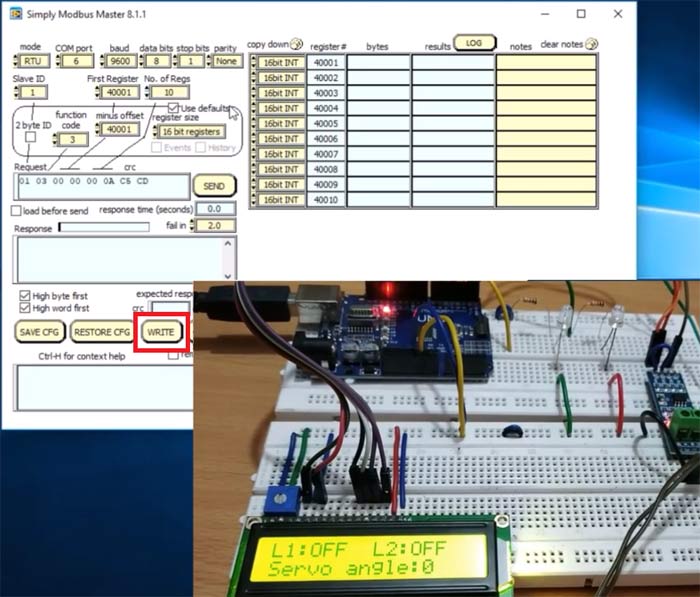 2. After the Simply Modbus Master Write is opened. Set the parameters 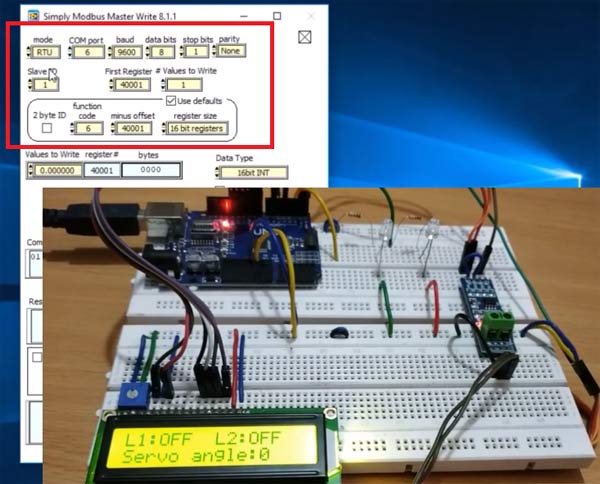 3. After that set first register as 40001 and values to write is 3 and the function code as 16 (Write Holding Register). 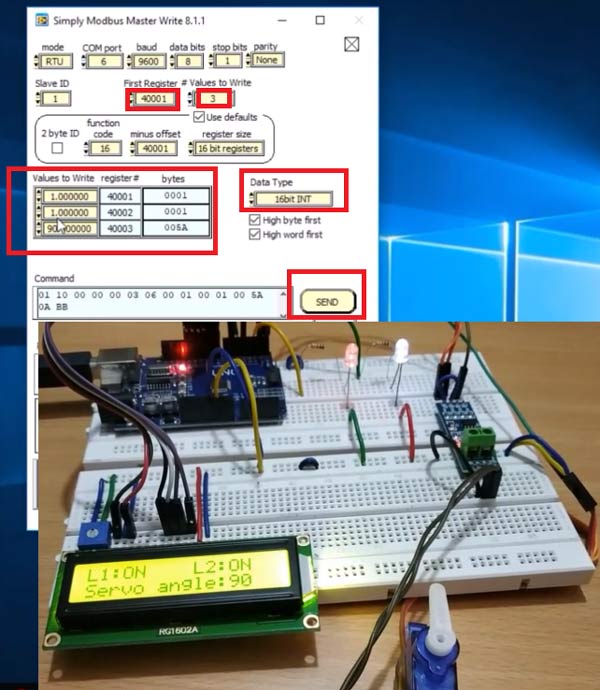 You can see both LED status is ON and servo angle at 90 degree. 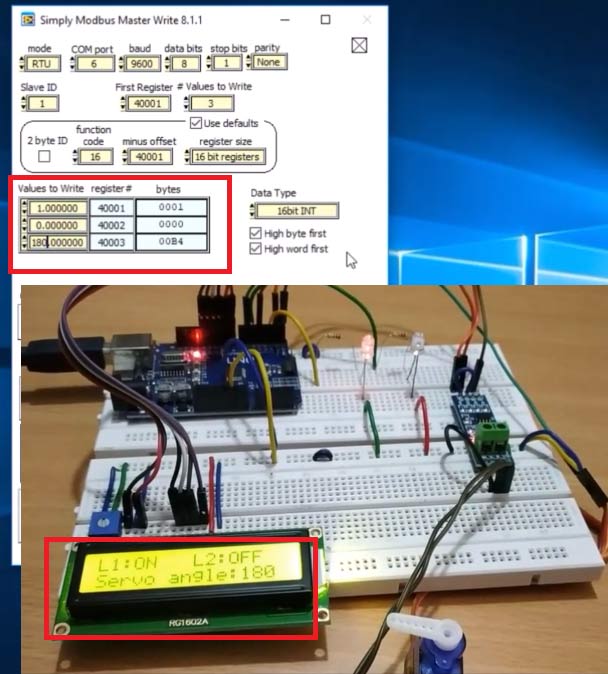 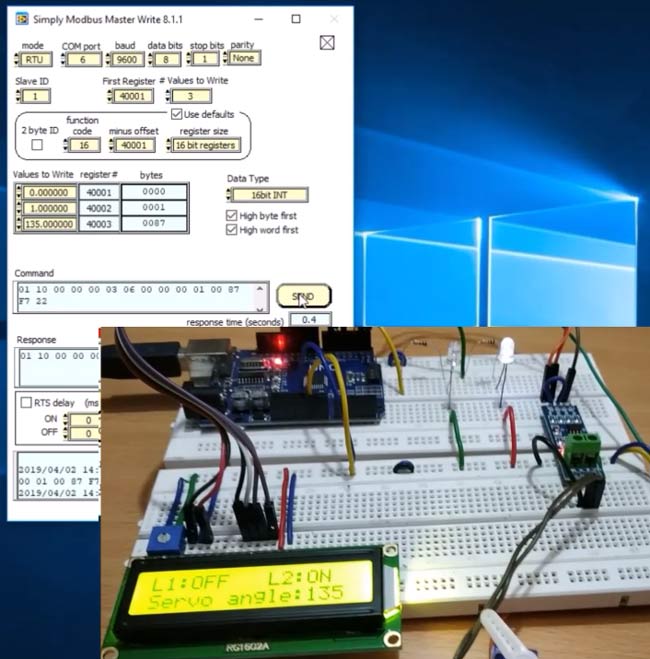 This is how RS-485 Modbus can be used in serial communication with Arduino UNO as Slave. In next tutorial we will use the Arduino Uno as master in MODBUS commination.

Find the complete code and a Demonstration video below.

hi , i tested both program of arduino RS485 modbus as master and slave communication , great thanks for this project and tutorial ,

from modbus like LED on OFF cammand and error massage , here in bothe example Arduino as master and arduino as Slave there are differant library and command are used , in hardware in RS 485 module DE and RE pin is short and in master mode not , so i want ask how i can use this project as slave mode but as transreceiver mode , want send digital keys data and receive cammand etc , please suggest.

Hi Ameeth, Did you find how

Hi Ameeth, Did you find how to read and write in the same time ? Thank you

Slave and Master in one Network

thanks for your posts about the master and slave. I had fun testing your systems! I and some others surely want to push it one step further. Is it possible to include one master and multiple slave devices in one RS485 network?

Can I configure the DIY system specified as follows:

I got a "half working" system that read and wrote data. My ModbusServerPro software indicated read and write access. The reads through the potentiometer were well displayed but the LED randomly went on and off. I guess the data was stored in a not well defined memory location through TX and RX due to code misinterpretation.

Christopher Can I have you email ID or conatct number.

I try to do this project but failed ...need some help from you

i have to prepare more then 2 same arduino UNO it presented in this tutorial right?

and i put port number one by one?

after, send message and done?

Well what is going on?

its due to Com port

its due to Com port mismatching...check the right com port and redo

hallo, i have a project. i want to communicate arduino with plc using modbus rs485. your post about modbus arduino as slave is running well. but i want to send from arduino (as slave) to plc but i dont know that syntax, can you give a example program to send data? thank you

Why it's must used holding

Why it's must used holding register ?

Hello, it was a great

Hello, it was a great explanation.

I have one doubt about how  the modbus-array[] was filled.

That is great project, but i

That is great project, but i can't found the library. Can you give me the library, please?

can u find library?

if u find it, please send me.

how to send a broadcast?

how to send a broadcast?

I tried this project, make

I tried this project, make the same circuit and have the same software, but it doesn't work, have someone an idea which problem I have?

Please explain in which

Please explain in which section you are facing problem ?

Did your code run sucessfully ? did you properly interface all the componens ?

I have wired the Arduino Uno

I have wired the Arduino Uno like the schematic on the picture, have an MAX485 the De & RE Pin are connected to D4, If i will write data via SimpleMosbusMaster to the Arduino uno via the RS485 board i get an error no response, so the Arduino maybe don't get data or don't answer.

the funny part is, that i use

the funny part is, that i use the chip45 bootloader with RS485 and this bootloader works fine, without any problems

this is very helfull i tryed and it works.

but my problem is i have to make the same projet on software serial
can you help me please?

I got it working to send data

I got it working to send data to turn on LEDs.  Can you teach me how to slave send data to Simply Modbus Master? I have some sensors on the Slave.

Many thanks for your explanation and for sharing knowledge with other people. I have a quick question and please see below.

If I write one line or 2 line outputs, the program is running fine. However, if I write a lengthy program, the Modbus connection is not working.

I look forward to seeing your response, please.