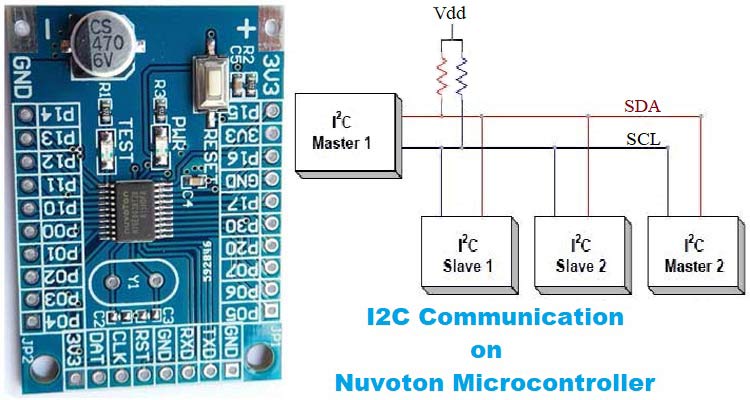 In the vast system of embedded applications, no microcontroller can perform all the activities by itself. At some stage of time, it has to communicate to other devices to share information, there are many different types of communication protocols to share these informations, but the most used ones are USART, IIC, SPI, and CAN. Each communication protocol has its own advantage and disadvantage. Let’s focus on the IIC part for now since that is what we are going to learn in this tutorial. If you are new here, do check out the Nuvoton Tutorials where we have discussed every peripheral of the N76E003 Microcontroller from the very basic getting started tutorial. If you want to learn how to use I2C with other microcontrollers, you can check out the links below.

I2C is an important communication protocol that is developed by Philips (now NXP). Using this I2C protocol, an MCU can be connected with multiple devices and start communication. I2C works with only two wires, namely SDA and SCL. Where SDA stands for Serial data and SCL stands for Serial Clock. However, these two pins require pull-up resistors to the VCC voltage level and with an adequate pull-up resistor, the bus could support 127 devices with a unique address.

What is I2C Communication Protocol?

The term IIC stands for “Inter Integrated Circuits”. It is normally denoted as I2C or I squared C or even as 2-wire interface protocol (TWI) at some places but it all means the same. I2C is a synchronous communication protocol meaning, both the devices that are sharing the information must share a common clock signal. It has only two wires to share information out of which one is used for the clock signal and the other is used for sending and receiving data. 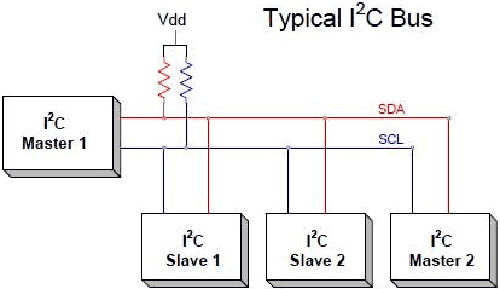 Serial Clock (SCL): Shares the clock signal generated by the master with the slave

Serial Data (SDA): Sends the data to and from between the Master and slave.

At any given time, only the master will be able to initiate the communication. Since there is more than one slave in the bus, the master has to refer to each slave using a different address. When addressed only the salve with that particular address will reply back with the information while the others keep quiet. This way, we can use the same bus to communicate with multiple devices.

Where to Use I2C Communication?

As the requirement of this project is to learn I2C communication using N76E003, we will use an EEPROM which will be connected with the I2C data line. We will store some data into the EEPROM and also read the same and display it using the UART screen.

As the stored value will be printed in the UART, any kind of USB to UART converter is required. You can also check out the tutorial on UART with Nuvoton if you are new to UART communication on N76E003. For our application, we will use CP2102 UART to USB converter. Other than the above, we also require the following components-

Not to mention, other than the above components, we need an N76E003 microcontroller based development board as well as the Nu-Link Programmer. Additionally, breadboard and hookup wires are also required for connecting all components.

As we can see in the schematic below, the EEPROM is connected in the I2C line along with two pull up resistors. On the extreme left, the programming interface connection is shown.

I used a breadboard for the AT24LC64 IC and connected the IC to my nuvoton programmer board using jumper wires. My hardware setup along with the nu-ink programmer is shown below. 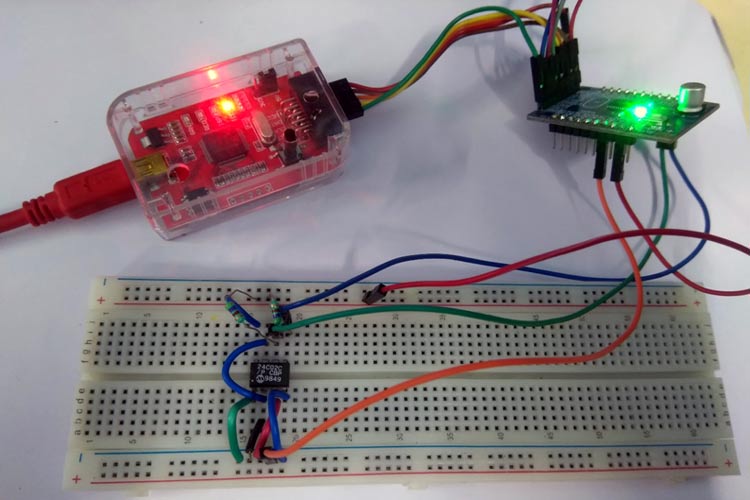 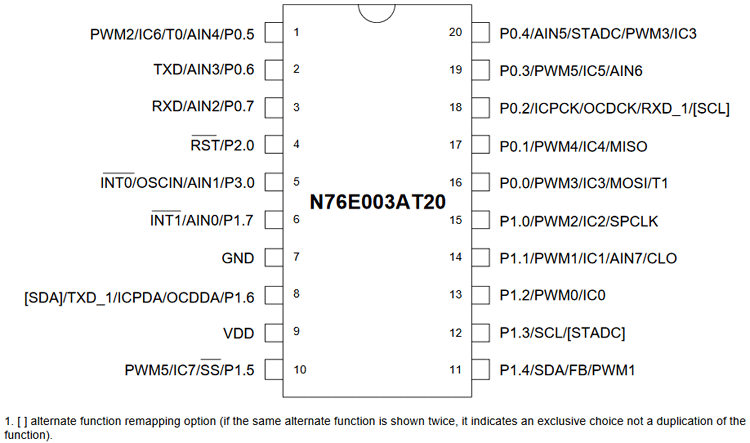 As we can see, each pin has different specifications and each pin can be used for multiple purposes. However, pin 1.4 is used as an I2C SDA pin, it'll lose the PWM and other functionality. But that is not a problem as another functionality is not required for this project. The same thing will happen for the P1.3 is the SCL pin of I2C.

Since I2C pins act as a GPIO, it needs to be configured. All GPIO pins can be configured in the below-described mode.

As per the datasheet, PxM1.n and PxM2.n are two registers that are used to determine the control operation of the I/O port. In the datasheet, it is stated that to use the I2C functionality, the I/O modes need to be used as Open-drain for I2C related communications.

It is an important thing in I2C communication. When data is transferred to the I2C line, it starts with begin condition and ends with a stop condition.

N76E003 supports a 7-bit address and data format. After the start condition is initiated, the master device needs to send the data to the I2C line. The first data is an important one. If this data is not properly created or transmitted, the connected device will not be identified and further communications cannot be made.

The data consists of a 7-bit long slave address, denoted as SLA. This 7-bit long address needs to be unique for each device if multiple devices are connected on the bus. After the 7-bit address, the 8th bit is the data direction bit. That means, depending on the 8th bit, the master sends the information to the slave device about whether data will be written in the slave device or the data will be read from the slave device. The 8th bit is the R/W bit referred to as Read or Write notifier. As we all know 8-bit information can be 128 types, thus supporting 128 devices, but I2C supports 127 types of devices on the same bus but not 128. Because the 0x00 address is a reserved address which is called a general call address. If the master wants to send information to all devices, it will address 0x00 and each device will replay in the same manner as per the individual software configurations.

The complete program used in this tutorial can be found at the bottom of this page. The explanation of important segments in the code is as follows-

Set Pins as Open Drain and Configure them for I2C:

Let's start with the I2C pin section first. As described before, the I2C SCL and SDA ports need to be configured and set as the open-drain configuration. To do this, we are using an I2C.h header file along with an I2C.c source file. The code snippet looks like this-

I2C control register I2CON is used to control the I2C operations. The first bit is the I2C pin selection bit. Setting it 0 configures the I2C pin as P13 and P14.

The next bit is SI which is the I2C status interrupt. If I2C Status Interrupt is enabled, the user should check the I2STAT register to determine which step has been passed and should take the action.

The STO is the STOP flag being set in master mode. STO is automatically cleared by hardware once the STOP condition has been detected.

The last one, I2CEN is the I2C bus enable or disable bit.

Now, coming to the 24C02. The board support package of N76E003 has an I2C code for the 24LC64 and can be modified easily. However, we will use a simple method to understand the I2C function.

If anybody wants to use detailed interfacing with EEPROM 24C02, then the EEPROM program in the BSP can be used.

We will only connect the 24C02 in I2C where the N76E003 will be master and the EEPROM will be a slave. Thus, we will write any data into the EEPROM address and read the same.

24C02 EEPROM pinout is shown below-

A0, A1, and A2 are three address selection pins. The WP pins are Write protect pins and need to be connected with VSS for enabling writing to in the EEPROM.

The Byte Write functionality is shown in the below image-

The full write cycle happens with a start bit. After that, the Control byte needs to be submitted. In the control byte, the following things are required- 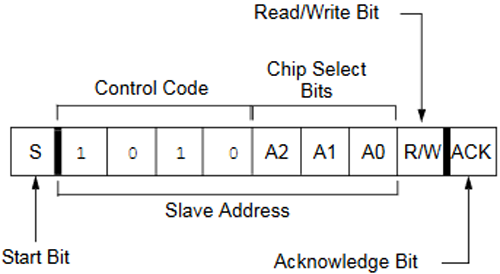 Spending on the read or write condition. The value of the address with the Read or Write bit will be - 0xA0 for Write and 0xA1 for reading. Next is the Acknowledge bit and after that, an 8-bit address will be transmitted where the data needs to be stored and finally, the data that will be stored in the respective location. These things are done in a step by step format in the main function.

Main Function and While Loop:

The main function is simple, it is continuously writing values to the EEPROM in the address 1 and reading the data. The data is then getting printed using the printf function. The printf is printing the value in hex.

The I2C start function consists of the following things-

The ack_mode and I2C_NACK, both are defined in the I2C header file as 0 and 1 respectively.

Similarly, the write function is created-

Flashing the Code and the Output

The code returned 0 warning and 0 Errors and was flashed using the default flashing method by the Keil. If you are new, check out the getting started with nuvoton tutorial to understand how to upload code. The compiling information of the code can be found below.

The hardware is being set up on a breadboard and is working as expected. As you can see in the image below, we were able to write a value on EEPROM and read it back from the memory and display it on the serial monitor. 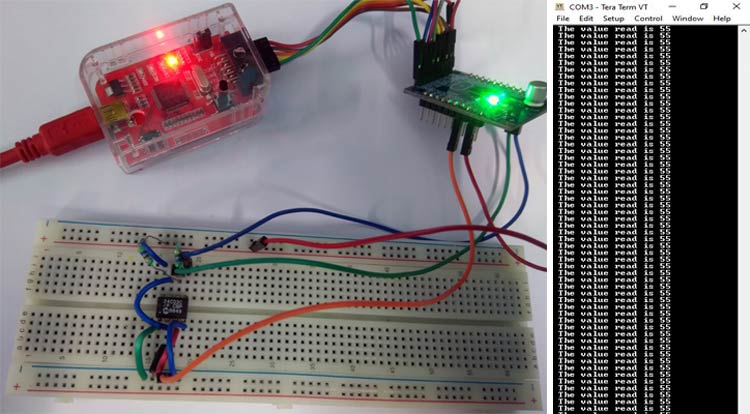 Check out the video given below for a complete demonstration of how the board works for this code. Hope you enjoyed the tutorial and learned something useful if you have any questions, leave them in the comment section below. You can also use our forums to post other technical questions.

I HAVE PROBLEM Interfacing

sir, i have problem in

sir, i have problem in

please give me solution

Can u just provide the I2C.h file??

Can you show us an example where N76E003 act as a slave to arduino as the master with thanks.

Thank you for your attention