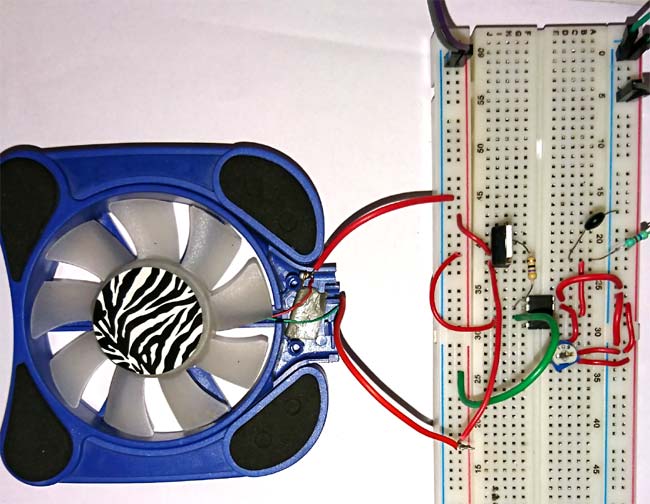 Below components are required for this Automatic Fan Controller using Thermistor:

Below is the circuit diagram for Temperature Controlled Fan using Thermistor as Temperature Sensor: 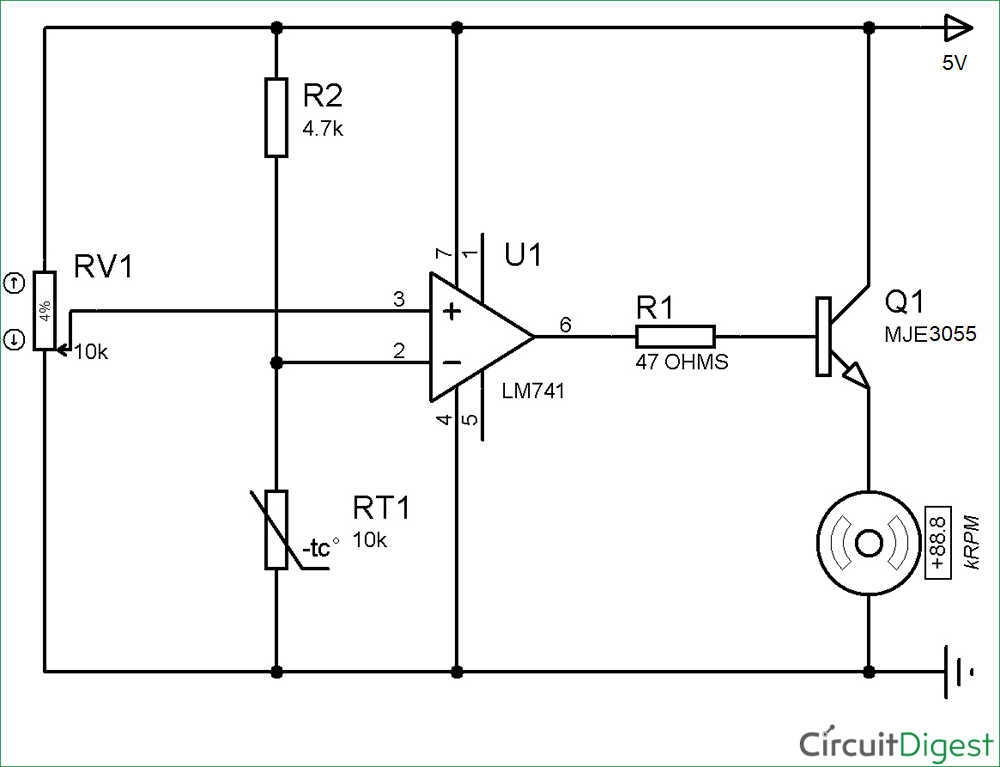 All the thermistor based projects can be found here.

An operational amplifier is a DC-coupled high gain electronic voltage amplifier. It’s a small chip having 8 pins. An operational amplifier IC is used as a comparator which compares the two signal, the inverting and non-inverting signal. In Op-amp IC 741 PIN2 is an inverting input terminal and PIN3 is non-inverting input terminal. The output pin of this IC is PIN6. The main function of this IC is to do mathematical operation in various circuits.

It works on the principle of thermistor. In this circuit, PIN 3 (non-inverting terminal of op amp 741) is connected with the potentiometer and PIN 2 (inverting terminal) is connected in between of R2 and RT1 (thermistor) which is making a voltage divider circuit. Initially, in the normal condition the output of the op amp is LOW as the voltage at non-inverting input is lesser than inverting input which makes the NPN transistor remains in off condition. The transistor remains in OFF condition because there is no voltage applied to its base and we need some voltage at its base to make the NPN transistor conduct. Here we have used NPN transistor MJE3055 but any high current transistor can work here like BD140.

Non when the temperature is increased, the resistance of Thermistor deceases and the voltage at non-inverting terminal of op-amp becomes higher than the inverting terminal, so the op amp output PIN 6 will become HIGH and transistor will be ON (because when the output of op amp is HIGH the voltage will flow through the collector to emitter). Now this conduction of NPN transistor allows the Fan to start. As the thermistor return to the normal condition the fan will automatically turn OFF.

1.) What if I use 12 volt for the input power and also DC fan that rated 12v? Should I increase/double the amount of resistor and thermistor that has being stated in the schematic? 2.) Is the circuit IC and transistor can handle more than 1 ampere current? Thank you, sir.

You can use the same circuit

The LM741 has a Maximum operating voltage of +18V and the MJE3055 Transistor has a Collector current of 10A and base current of 6A. So yes, You should be able to use the  same circuit for a 12V source and 12V fan and can also handle current of 1A.

would this be able to drive

would this be able to drive multiple fans, a bank of 6? thanks.

No it cannot handle that much

No it cannot handle that much current for 6 fans. You have to use individual op-amps

What is the watts of the

What is the watts of the potentiometer, ntc themistor and npn transistor and also the ampere of the power supply?

Will this work using 3 volt

Will this work using 3 volt supply. I've connected everything up using a 3 volt led and this stays on constantly with no change when I adjust the pot. Thanks

No it will not work

No it will not work

Is there any substitute for

Is there any substitute for NTC Thermistor? Thanks

Yes, there are lots of

Yes, there are lots of temperature sensors.... whcih can be used measure temperature LM35 is an example

How to set temperature value

How to set temperature value at which the fan get started

Yes you can . You can power

what is the use of amplifier ?

I used this project with

I used this project with IC358 , it is now soldered in the circuit board i made, i also used MJE3055T but it dosent work pls help

thank you, i used this and work like charm but why fan dont work full speed i think problem is from ampere or voltage

can you help me?