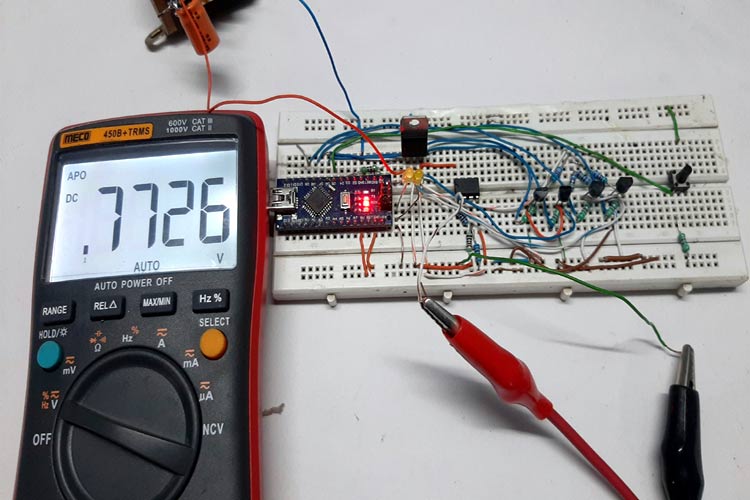 In the measurement industry, a very crucial functional block is a Programmable Gain Amplifier (PGA). If you are an electronic enthusiast or a college student, you have probably seen a multimeter or oscilloscope measuring very small voltages very preciously because the circuit has a built-in PGA alongside a powerful ADC that helps with the precise measurement process.

Nowadays, off the shelf PGA amplifier offers an op-amp based, a non-inverting amplifier with a user-programmable gain factor. This type of device has very high input impedance, wide bandwidth, and a selectable input voltage reference built into the IC. But all these features come with a cost, and for me, it's not worth putting that costly of a chip for a generic application.

So to overcome these situations, I have come up with an arrangement consisting of an Op-amp, MOSFET, and Arduino, through which I was able to change the gain of the op-amp programmatically. So, in this tutorial, I am going to show you how to build your own Programmable Gain Amplifier with an LM358 op-amp and MOSFETS, and I will be discussing some pros and cons of the circuit alongside testing.

To understand the working of this circuit, it is very important to know how an operational amplifier works. Learn more about Op-amp by following this op-amp tester circuit. 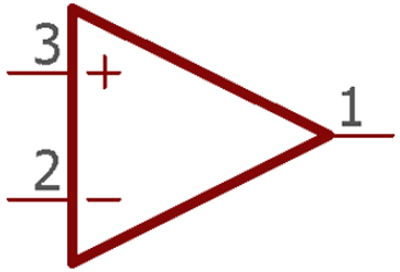 In the above figure, you can see an operational-amplifier. The basic job of an amplifier is to amplify an input signal, alongside amplification, the op-amp can also do various operations like sum, differentiate, integrate, etc. Learn more about the summing amplifier and differential amplifier here.

An op-amp only follows two rules

So with those two rules cleared up, we can analyze the below circuits. Also, learn more about Op-amp by going through various Op-amp based circuits. 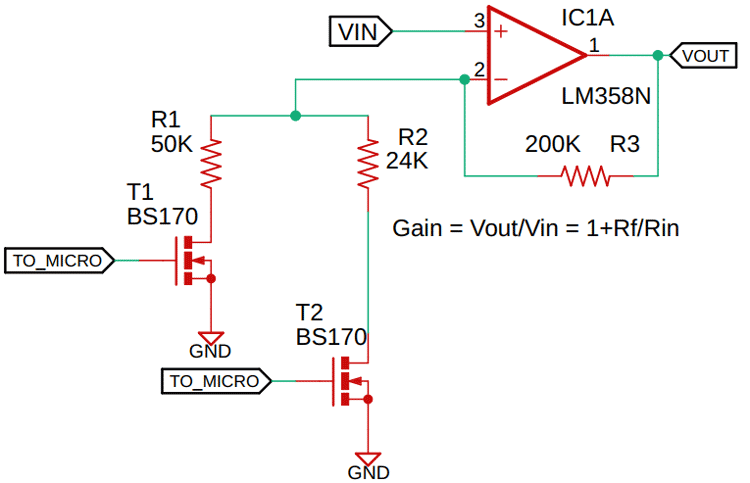 In the test section, I did just that I switched the MOSFETs one at a time and compared the measured values with the practical values, and you can observe the results in the "testing the circuit" section below. 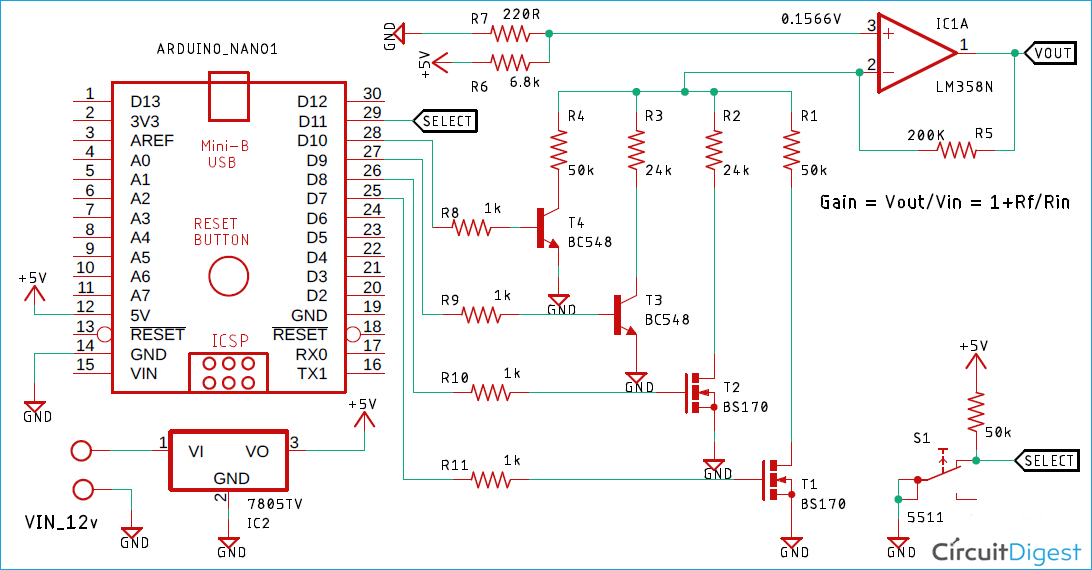 For a demonstration of Programmable Gain Amplifier, the circuit is constructed on a solderless breadboard with the help of the schematic; To reduce internal parasitic inductance and capacitance of the breadboard, all the components have been placed as close as possible.

Here the op-amp in the circuit is configured as a non-inverting amplifier and the input voltage from the 7805 voltage regulator is 4.99V.

In this blog, I want to show you the reason for using a MOSFET rather than a BJT, hence the circuit arrangement.

Here Arduino Nano is used to control the base of the transistor and the gate of the MOSFETs, and a multimeter is used to show the voltage levels because the built-in ADC of the Arduino does a very poor job, when it comes to measure low voltage levels.

Complete Arduino code for this project is given below. As this is a very simple Arduino code we do not need to include any libraries. But we do need to define some constants and input pins as shown in the code.

The void setup() is the main functional block where read and write operation for all the inputs and outputs are performed as per requirement.

The measured values for the PGA amplifier circuit are shown below.

Note! The measured values of the resistor are shown because with measured resistor values we can closely compare the theoretical values and practical values.

Now the calculation from the voltage divider calculator is shown below,

The output of the voltage divider is 0.1564V

Vout when R1 is the selected resistor

Vout when R2 is the selected resistor

Vout when R3 is the selected resistor

Vout when R4 is the selected resistor

I did all that to compare the theoretical and practical values as close as possible.

With all the calculations done, we can move on to the testing section.

The above image shows you the output voltage when the MOSFET T1 is on, hence current is flowing through the Resistor R1. 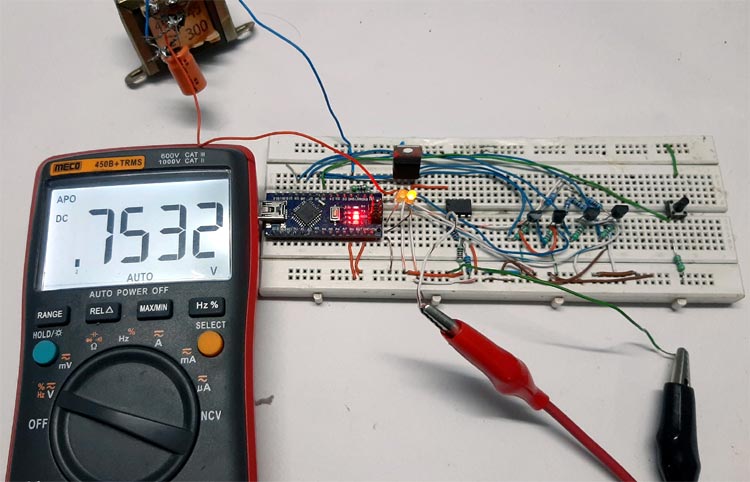 The above image shows you the output voltage when Transistor T4 is on, hence current is flowing through the Resistor R4. 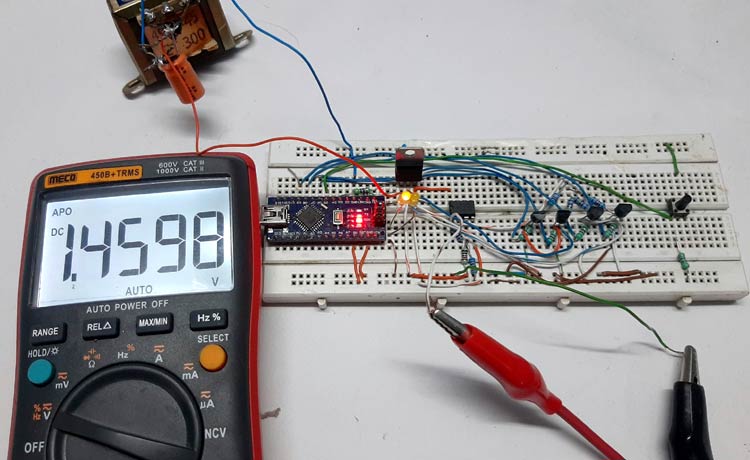 The above image shows you the output voltage when the MOSFET T2 is on, hence current is flowing through the Resistor R2.

The above image shows you the output voltage when Transistor T3 is on, hence current is flowing through the Resistor R3.

As you can see from the schematic that T1, T2 are MOSFETs, and T3, T4 are transistors. So when MOSFETs are used, the error is in 1 to 5 mV range but when transistors are used as switches we are getting an error in 10 to 50 mV range.

With the above results, it's clear that the MOSFET is the goto solution for this kind of application, and the errors in the theoretical and practical may be caused due to the offset error of the op-amp.

Note! Please note that I have added two LEDs just for the sake of testing and you can't find them in the actual schematic, it shows binary code to show which pin is active

As this circuit is cheap, easy, and simple, it can be implemented in many different applications.

Here MOSFET is used as a switch to pass all the current through the resistor to ground that is why the effect of temperature is not certain, and with my limited tools and test equipment, I was not able to show you the effects of varying temperature on the circuit.

The objective of using a BJT alongside MOSFETs is because I want to show you how poor a BJT can be for this kind of application.

The values of the feedback resistors and the input resistors must be in the KΩ range, that is because with lower resistor values, more current will flow through the MOSFET, thus more voltage will drop across the MOSFET causing unpredictable results.

The circuit can be further modified to improve its performance like we can add the filter to reject high-frequency noises.

As LM358 jelly bean op-amp is used in this test, the offset errors of the op-amp are playing a major role at the output voltage. So it can be further improved by using an instrumental amplifier rather than an LM358.

This circuit is made just for demonstration purposes only. If you are thinking about using this circuit in a practical application, you have to use a chopper type op-amp and high precision 0.1 ohms resistor to achieve absolute stability.