There is a long debate that Supercapacitors will overrule the battery market in the future. A few years back when Supercapacitors were made available, there was a huge hype about it and many expected it to replace the batteries in commercial electronic products and even in Electric Vehicles.  But, nothing like that actually happened, because both Supercapacitors and Batteries are entirely different from each other and they have their own applications.

Fun Fact: Almost all modern airbag controllers are powered by supercapacitors, because of their fast response time over batteries.

Compared with the battery, the Supercapacitor or Ultracapacitor is a high-density energy source or storage with huge capacitance for a short time span. In this article, we will discuss Supercapacitor vs Battery (Lithium / Lead Acid) on various parameters and conclude with a case study for an engineer to understand where one could select a supercapacitor over a battery for his applications. If you are a newbie to Supercapacitors then it is highly recommended to learn the basics of Supercapacitors before you proceed further. 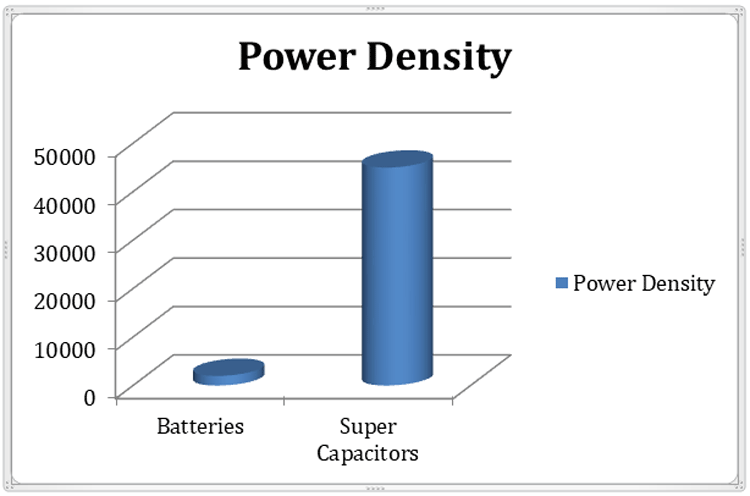 Due to the high power density, a supercapacitor is a useful power source where larger peak current is required. 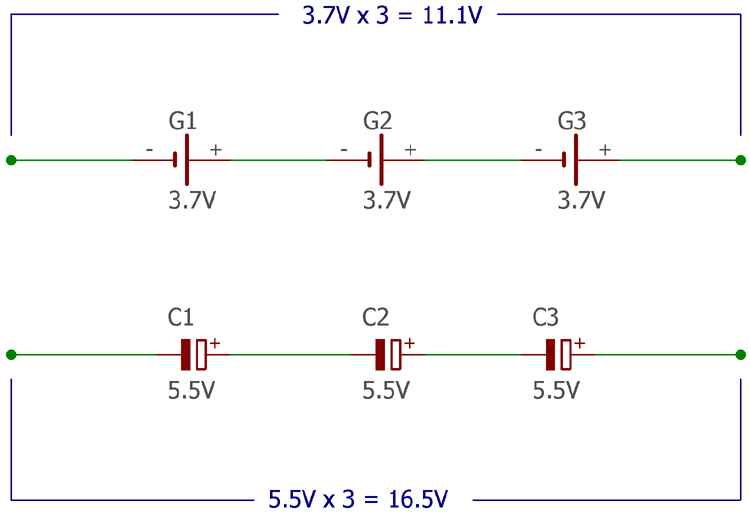 For example, an application with a linear voltage regulator like 7812 requires at least 15V input. A single-cell Lithium battery provides 3.2 volts at the lowest charge condition and 4.2 volts at the highest charge condition. Therefore, to compensate with the input voltage specification, at least 5 batteries in series connection is required but supercapacitor could provide 2.5 volts to 5.5-volt output. Supercapacitors have a high cell voltage of 5.5V compared with 3.7V of a typical Lithium battery. Thus, ignoring other limitations of a supercapacitor the circuit designer can choose three 5.5 volt supercapacitors in series. Over the battery, this is an undoubtedly plus point of supercapacitors in space constraint situations or cost optimization for purposes.

In terms of efficiency, supercapacitors are 95% more efficient than the batteries which are 60-80% efficient under full load conditions. Batteries in high load dissipate heat that contributes to low efficiency. Also, battery temperature and other parameters should be monitored during the charging and discharging using a Battery Management System (BMS), whereas in supercapacitors such strict monitoring systems might not be needed. The Efficiency of Ultracapacitor vs Battery is shown in the below figure. However, it should be noted that Supercapacitor also generates nominal heat during operation.

A supercapacitor almost has infinite charge cycles, it can be charged and discharged for a huge number of times; it can be from 1 lakh to 1million of time. The lifespan of a supercapacitor is also high. A supercapacitor can last for 10-18 years, while a Lead-Acid battery can last around 3-5 years only.

Different batteries use different charging algorithms. To charge Lithium-ion batteries constant voltage and constant current charging chargers are used. The charger needs to be specially configured to detect the charge condition of the battery as well as the temperature. For the case of lead-acid batteries trickle charging method is used.

Overall, to charge batteries irrespective of the Lithium-ion or lead-acid, it takes hours to get fully charge. The supercapacitor has supper fast charging time; it needs a very short period of time for getting a full charge. Therefore, for the applications where the charge time is required to be very less, supercapacitors definitely win over the same capacity of batteries.

Cost is an important parameter for product design related issues. Supercapacitors are a costly alternative when used instead of batteries. The cost sometimes gets very high such as 10 times higher when compared with the same capacity of the battery.

Lithium or lead-acid batteries require special care or attention during operating or charging conditions. Especially for lithium-ion batteries, the charging topology needs to be configured in such a way that the battery should not be overcharged or charged with a higher capacity of current than the battery can actually accept. This increases the risk of an explosion whenever the battery is overcharged or charged with a high current.

Not only in charging condition, but the batteries also need to be carefully operated during discharging situations. Deep discharge condition could potentially damage the battery life. Therefore, the battery needs to be disconnected from the load after it is reached to a certain level of charging state.  Also, the short circuit of a battery is a dangerous situation.

Supercapacitors are safer than the batteries in terms of the above risk factors. However, charging a supercapacitor using a higher voltage than its rating is potentially harmful to the supercapacitors. But, when charging more than a single capacitor, it can become a complex job.

Let's consider a situation where we want to light up 10 parallel LEDs for 1 hour. For this application, let's find out, as an engineer should we consider using a supercapacitor or lithium battery?

Let's assume the LEDs draw 30mA of current at 2.5V. Therefore, the wattage of 10 LEDs in parallel will be

Now, for 1 Hour of usage which is 3600 seconds, the energy required can be calculated as