An Introduction to Supercapacitors 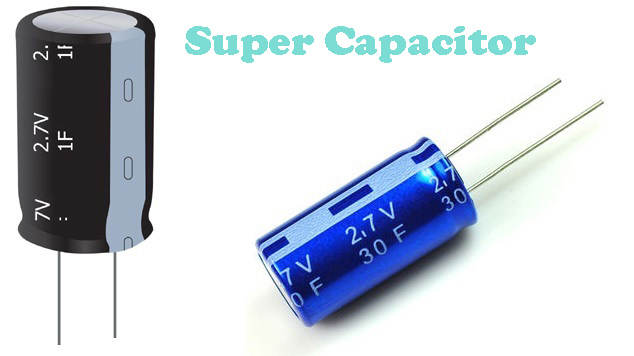 The capacitor is a two-terminal passive component, which is widely used in electronics. Almost, every circuit we find in electronics, use one or more capacitors for various usage. Capacitors are the most used electronics component after resistors. They have a special ability to store energy. There are different types of capacitors available in the market, but one which is recently getting popularity and promise a replacement or alternative of batteries in future, are supercapacitors or also known as ultracapacitors. ​A supercapacitor is nothing but a high-capacity capacitor with capacitance values much higher than normal capacitors but lower voltage limits.They can store 10 to 100 times more energy per unit volume or mass than electrolytic capacitors, can receive and deliver charge much faster than batteries, and tolerate more charging-discharging cycles than rechargeable batteries.

In the above image, a locally available 2.7V, 1Farad super capacitor image is shown. The voltage rating is much lower but the capacitance of the above capacitor is quite high.

Benefits of Super-Capacitor or Ultra-Capacitor

Supercapacitors store energies in its electric field, but in case of batteries, they use chemical compounds to store energies. Also, because of its ability to quick charge and discharge, the Supercapacitors are slowly entering in the battery market. Low internal resistance with very high efficiency, no maintenance cost, higher lifetimes are the main reason for its high demand in the modern power source related market.

A capacitor store energies in the form of Q = C x V. Q stands for Charge in Coulombs, C for capacitance in Farads and V for voltage in volts. So, if we increase the capacitance the stored energy Q will also increase.

The unit of capacitance is Farad (F) which is named after M. Faraday. Farad is the capacitance unit in respect of coulomb/volt. If we say a capacitor with 1 Farad, then it will create a 1-volt potential difference between its plates depending on the 1-coulomb charge.

If the value becomes much higher, like mF to few Farads (Generally <10F), means the capacitor can holds much more energies between its plates, that capacitor is called as Ultra capacitor or Supercapacitor.

The energies stored in a capacitor is E = ½ CV2 Joules. E is the stored energy in joules, C is the capacitance in Farad and V is the potential difference between the plates.

Construction of a Supercapacitor

Supercapacitor is an electrochemical device. Interestingly, there are no chemical reactions are responsible to store its electrical energies.​ They have a unique construction, with a large conductive plate or electrode, which are closely situated with a very small surface area. Its construction is the same as an electrolytic capacitor with a liquid or wet electrolyte between its electrodes. You can learn about different types of capacitors here.

Supercapacitor acts as an electrostatic device storing its electrical energy as the electric field between the conductive electrodes. 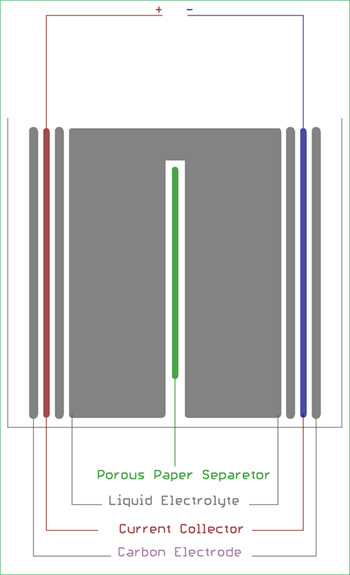 The electrodes, Red and blue, are coated double-sided. They generally made of graphite carbon in the form of carbon nanotubes or gels or a special type of conductive activated carbons.

The separation plate and the area of the plates are responsible for the capacitance value of the capacitor. The relation can be denoted as

Where, Ɛ is the permittivity of the material present between plates

A is the area of the plate

D is the separation between plates

So, in case of supercapacitor, the contact surface is needed to be increased, but there is a limitation. We cannot increase the physical shape or size of the capacitor. To overcome this limitation special type of electrolytes are used to increase the conductivity between plates thus increasing the capacitance.

These constructions have a drawback. The voltage across the capacitor became very low because of the decomposition voltage of the electrolyte. The voltage is highly dependent on the electrolyte material, the material can limit the electrical energy storing capacity of the capacitor. So, due to the low terminal voltage, an supercapacitor can be connected in series to store electrical charge at a useful voltage level. Due to this, the supecapacitor in series produce higher voltage than usual and in parallel, the capacitance became larger. It can be clearly understood by the below Supercapacitor Array Construction technique.

Let's see the array construction of the Supercapacitor. 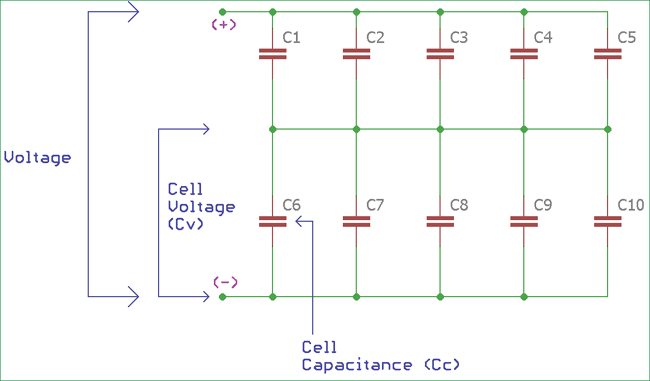 If we create the array, the voltage in series will be

And the capacitance in parallel will be

We need to create a backup storage device, and for that a 2.5F super or supercapacitor is required with the 6V rating.

If we need to create the array using 1F capacitors with the 3V rating, then what will be the array size and capacitors quantities?

Means two capacitor in series will have a 6V potential difference. 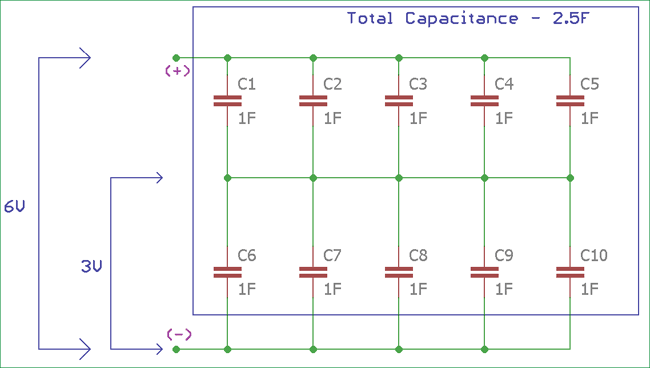 The total energy stored in the array is