The durability and dependability of an electronic circuit are highly dependent on how well it is designed considering all odds, which could practically occur when the product is actually in use. This is particularly true for all power supply units like AC-DC Converters, or SMPS Circuits because they are connected directly to the AC mains and a varying load which makes them susceptible to overvoltages, voltage spikes, overloading, etc. This is why designers include many types of Protection circuits in their design, we have already covered a lot of popular protection circuits namely

What is Inrush Current?

As the name suggests the term “inrush current” indicates that when a device is turned on during the initial stage a huge amount of current rushes into the circuit. By definition, it can be defined as the maximum instantaneous input current drawn by an electrical device when it is turned on. This behavior can be well observed in AC inductive loads like Transformers and Motors, where the inrush current value will normally be twenty or thirty times more than the nominal values. Even though the value of inrush current is very high it occurs only for a few milliseconds or microseconds hence cannot be noticed without a meter. Inrush current can also be called as Input surge current or Switch-on surge current based on convenience. Since this phenomenon is more with AC loads, AC Inrush current limiter is more used than its DC counterpart.

This is fairly true, easy to work with and simple math. But, as told earlier there is another state exists where the current drawn by the circuit can be 20 or even 40 times larger than the steady-state current. It is the initial state or power on stage of the circuit. Now, why this high current is suddenly drawn by the circuit as it is rated for low current application? Such as the previous example, 1mA to the 1000mA.

What causes Inrush Current in a device?

To answer the questions we have to get into the magnetics of inductor and motor coils, but to start let’s consider that, it’s like moving a huge cupboard or pulling a car, initially, we need high energy, but as things start moving, it became easier. Exactly the same thing happens inside a circuit. Almost every circuit, especially power supplies, uses large value capacitors and inductors, chokes, and Transformers (a huge inductor) all of which draw a huge initial current to develop the magnetic or electric field required for their operation. Thus the input of the circuit suddenly provides a low resistance (impedance) path which allows a large value of current to flow into the circuit.

Capacitors and inductors behave differently when they are in a fully charged condition or discharge condition.  For example, a capacitor when it is in a fully discharged condition acts as a short circuit due to the low impedance, whereas a fully charged capacitor smoothens out the dc if connected as a filter capacitor. However, it is a very small span of time; in few milliseconds the capacitor gets charged. You can also read about the ESR and ESL values of a capacitor to better understand how it works in a circuit.

On the other side, Transformers, motors, and inductors (all coil related stuff) generates back emf during startup, also requires very high current during the charging state. Normally, few current cycles are required to stabilize the input current to a steady-state. You can also read about DCR value in the inductor to better understand how inductors work in a circuit.

In the above image, a current vs. time graph is shown. The time shown in milliseconds but that can be in microseconds too. However, during the startup, the current start to increase and the maximum peak current is 6A. It is the inrush current that exists for a very short time span. But after the inrush current, the current flow gets stable at a value of .5A or in 500mA. This is the steady-state current of the circuit.

Therefore, when the input voltage is applied to the power supply or in a circuit that has very high capacitance or inductance or both, inrush current occurs. This initial current as shown in the inrush current graph gets very high to cause the input switch melting or blown-up.

There are two ways to design inrush current limiter using the resistor limit method. The first one is to add a series resistor to reduce the current flow in the circuit line and the other one is to use line filter impedance in AC supply input.

But this method is not an efficient way to add across a high output current circuit. The reason is obvious because it includes resistance. The inrush current resistor gets heated up during normal operation and reduces efficiency. The resistor wattage depends on the application requirement, typically ranges between 1W to 4W.

Thermistor or NTC based current limiter

The Thermistor is a temperature coupled resistor that changes resistance depending on the temperature. In an NTC inrush, current limiter circuit is similar to resistor limiting method, Thermistor or NTC (Negative temperature coefficient) is also used in series with the input. 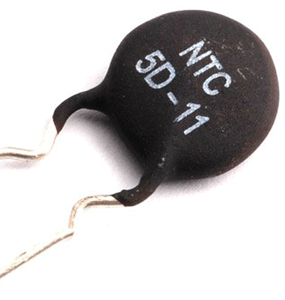 Thermistors have characteristics of changed resistance value at different temperatures, specifically, at low-temperature Thermistor behaves like a high-value resistor, whereas at high temperatures, it provides low-value resistance. This property is used for the Inrush current limiting application. 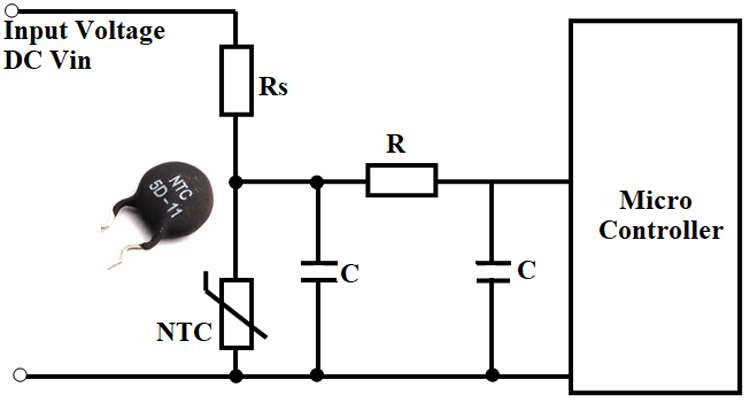 During the initial startup of the circuit, the NTC provides high-value resistance which decreases the inrush current flow. But during the circuit goes into the steady-state condition, the temperature of the NTC starts increasing which further resulted in low resistance. NTC is a very effective method of controlling inrush current.

Different type of voltage regulator DC/DC converters uses the soft start or delay circuit to reduce the inrush current effect. Such type of functionality enables us to change the output rise time which effectively reduces the output current when connected to a high-value capacitive load.

For example, 1.5A Ultra-LDO TPS742 from Texas Instruments offers programmable soft-start pin where the user can configure Linear Start Up using a simple external capacitor. In the below circuit diagram, an example circuit of TPS742 is shown where the soft-start time is configurable using the SS pin by using the CSS capacitor.

Where and why we need to consider Inrush Current Protection Circuit?

Therefore, to minimize the effect of inrush current, it is important to provide an inrush current limiter circuit where the input capacitance is very high or has a large inductance.

How to measure Inrush Current:

The main challenge of measuring inrush current is the fast time span. Inrush current occurs for a few milliseconds (or even microseconds) depending on the load capacitance. The value of the time span generally differs from 20-100 milliseconds.

One easiest way is to use the dedicated clamp meter which has the option to measure the inrush current. The meter gets triggered by the high current and takes multiple samples to get the maximum inrush current.

Another method is to use a high-frequency oscilloscope but this process is a bit tricky. One needs to use a very low-value shunt resistor and requires two channels to connect across the shunt resistor. By using the different functions of these two probes one can get the maximum peak current. One needs to be careful while connecting the GND probe, the wrong connection across the resistor could lead to a short circuit. The GND needs to be connected across the circuit GND. The below image is the representation of the above-mentioned technique.

Factors to consider while designing an Inrush Current Protection Circuit:

Some different factors and specifications are needed to be taken into the account before choosing the inrush current limiting method. Here is a list of few essential parameters –

1. The capacitance value of the load

The capacitance of the load is essential parameters to select the specification of inrush current limiting circuit. High capacitance requires a high transient current during startup. For such a case an effective soft start circuit is required.

How fast the load gets on or off during a given time frame is another parameter to choose the inrush current limiting method. For example, if the switching on/off time is very fast then the NTC could not protect the circuit from inrush current. Because, after a first cycle reset, the NTC does not get cooled down if the load circuit is turned off and on in a very short time span. therefore the initial start resistance couldn’t be increased and the inrush current gets bypassed through the NTC.

In specific cases, during circuit design, if the power source and the load is existing inside the same circuit it is wiser to use voltage regulator or LDOs with soft start facility to reduce the inrush current. In such a case, the application is a low voltage low current application.