Full Subtractor Circuit and Its Construction 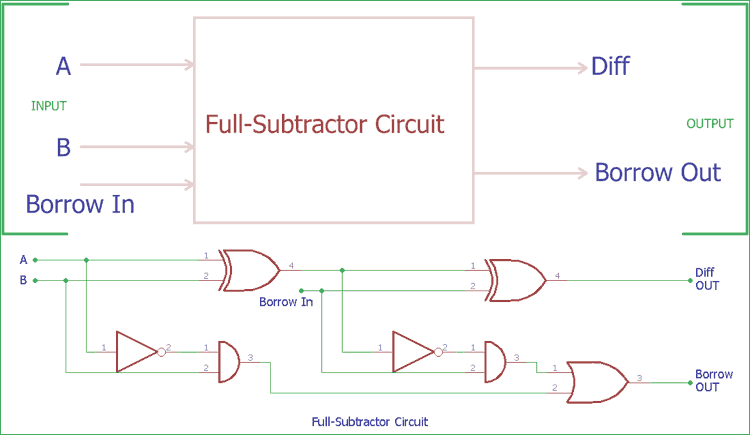 In the previous tutorial of Half Subtractor Circuit, we had seen how computer use single bit binary numbers 0 and 1 for subtraction and create Diff and Borrow bit. Today we will learn about the construction of Full-Subtractor circuit.

Half-Subtractor circuit has a major drawback; we do not have the scope to provide Borrow in bit for the subtraction in Half-Subtractor. In case of full Subtractor construction, we can actually make a Borrow in input in the circuitry and could subtract it with other two inputs A and B. So, in the case of Full Subtractor Circuit we have three inputs, A which is minuend, B which is subtrahend and Borrow In. On the other side we get two final output, Diff (Difference) and Borrow out.

The Final Borrow out represents the most significant bit or MSB.

If we see the actual circuit inside the full Subtractor, we will see two Half Subtractor using XOR gate and NAND gate with an additional OR gate.

In the above image, instead of block diagram, actual symbols are shown. In previous half-Subtractor tutorial, we had seen the truth table of two logic gates which has two input options, XOR and NAND gates. Here an extra gate is added in the circuitry, OR gate. This circuit is very similar with full-adder circuit without the NOT gate.

We can also express the full Subtractor circuit construction in Boolean expression.

For the case of DIFF, We first XOR the A and B input then we again XOR the output with Borrow in. So, the Diff is (A XOR B) XOR Borrow in.We can also express it with:

Now, for the Borrow out, it is:

which can be further represented by

As of now, we described the construction of single bit full-Subtractor circuit with logic gates. But what if we want to subtract two, more than one bit numbers?

In such cases a cascaded full-Adder circuit can be used with NOT gates. We could use 2’s compliment method and it is popular method to convert a full adder circuit to a full Subtractor. In such case, we generally invert the Logic of subtrahend inputs of the full adder by inverter or NOT gate. By adding this non inverted input (Minuend) and Inverted Input (Subtrahend), while the carry input (LSB) of the full adder circuit is in Logic High or 1, we subtract those two binaries in 2’s complement method. The output from the Full-adder (which is now full Subtractor) is the Diff bit and if we invert the carry out we will get the Borrow bit or MSB. We can actually construct the circuit and observe the output.

The pin diagram is shown in the schematic. 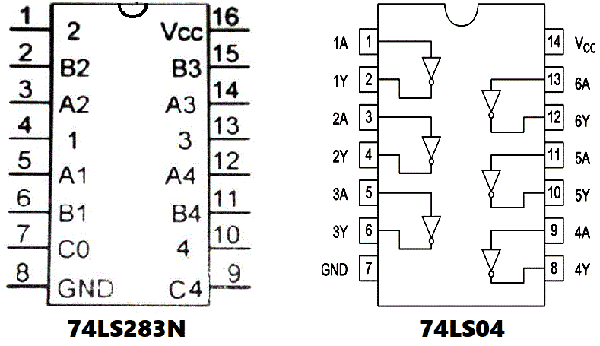 Circuit Diagram to use these ICs as a Full-Subtractor circuit-

Check the Demonstration Video for further understanding below, where we have shown subtracting two 4-bit binary Numbers.