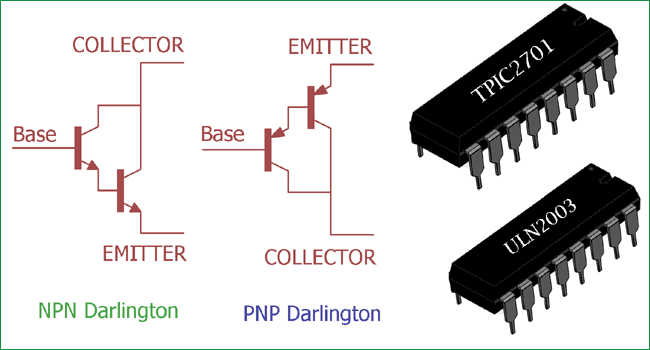 Darlington Transistor Pair and its Configuration: 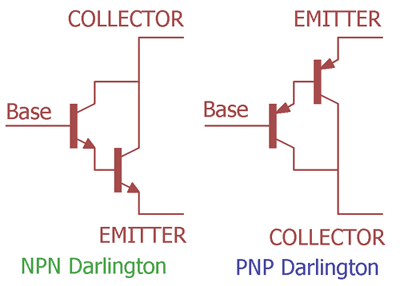 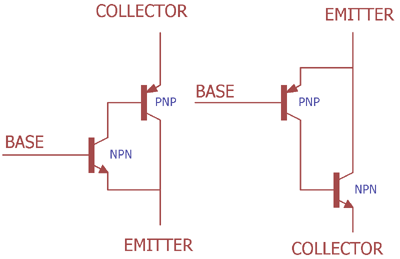 In the above image the Sziklai Darlington pairs are shown. This configuration produces less heat and has advantages about response time. We will discuss about it later. It is used for class AB amplifier or where the Push-Pull topologies are needed.

Here are few projects where we used the Darlington Transistors:

In the below image we can see two PNP or two NPN transistors are connected together. 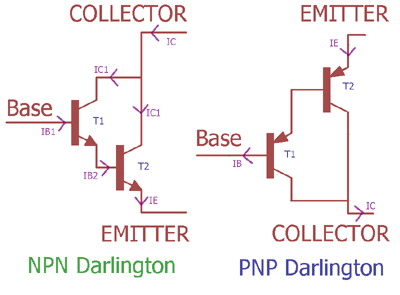 The overall current gain of the Darlington pair will be-

So, the total current gain (β) is achieve, when the collector current is

Now as discussed above, we get the Collector current β * IB1

In this situation, the current gain is unity or greater than one.

Let’s see how the current gain is the multiplication of the two transistor’s current gain.

IB2 is controlled by the emitter current of T1, which is IE1. IE1 is directly connected across T2. So, IB2 and IE1 are same.

We can change this relationship further with

Changing the IC1 as we did previously, we get

Now as previously, we have seen that

So, the total collector current IC is a combinational gain of individual transistors gain. 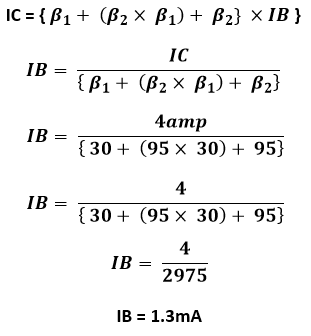 So, if we apply 1.3mA of current across the first transistor base, the Load will switch “ON” and if we apply 0 mA current or grounded the base the load will be switched “OFF”.

The application of Darlington transistor is same as normal BJT Transistor. 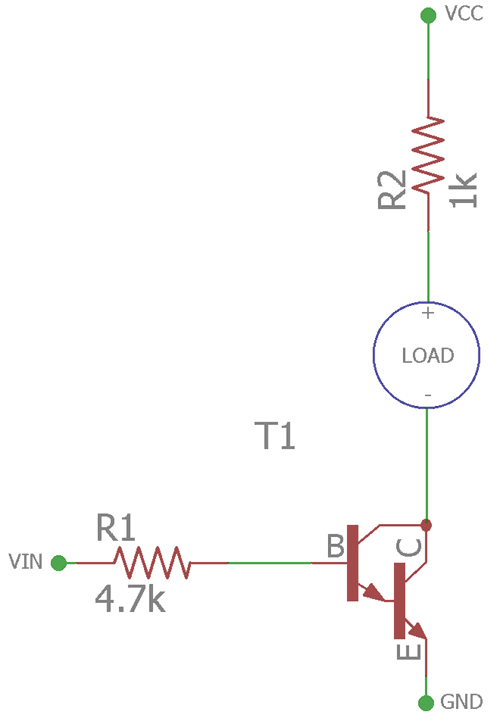 In the above image the NPN Darlington transistor is used for switching the load. The load can be anything from Inductive or Resistive load. The Base resistor R1 is providing the Base current to the NPN Darlington transistor. The R2 resistor is to limit the current to the load. It’s applicable for specific loads that need current limiting in stable operation. As the example suggests that the base current required very low, it can be switched from Microcontroller or Digital logics units easily. But when the Darlington pair is in saturated region or fully on condition, there are voltage drop across base and emitter. It is a main disadvantage for a Darlington pair. The voltage drops range from .3V to 1.2v. Due to this voltage drop the Darlington transistor get hotter when in fully on mode and supplying current to the load. Also, due to the configuration the second resistor is turned on by the first resistor, the Darlington Transistor produce slower response time. In such case Sziklai configuration provide advantage over the response time and thermal performance.

A popular NPN Darlington transistor is BC517. 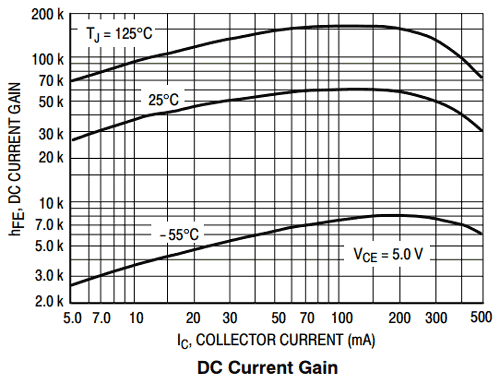 What is an Identical Darlington Transistor? 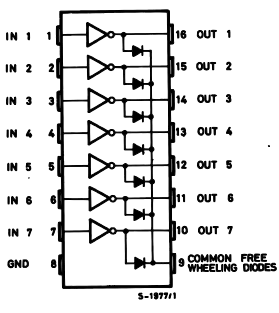 This is the internal structure of the ULN2003 IC. It is 16pin dip package. As we can see the input and output pin are exactly opposite, due to that it is easier for connecting the IC and making the PCB design more simplistic.

There are seven open collector pins are available. One additional pin is also available which is useful for inductive load related application, it can be motors, solenoids, relays, which needs freewheeling diodes, we can make the connection using that pin. 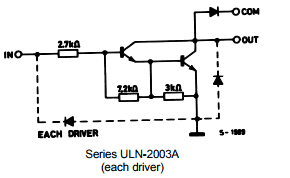 In the upper image the actual Darlington array connection is shown for the each driver. It is used in seven drivers, each driver consist this circuit.

When the input pins of ULN2003, from pin 1 to pin 7, is provided with High, the output will be low and it will sink current through it. And when we provide Low in input pin the output will be in high impedance state, and it will not sink current. The pin 9 is used for freewheel diode; it should always be connected to the VCC, when switching any inductive load using ULN series. We can also drive more current applications by paralleling two pair’s inputs and outputs, like we can connect pin 1 with pin 2 and on the other hand can connect pin 16 and 15 and parallel two Darlington pairs for driving higher current loads.

ULN2003 is also used to drive stepper motors with Microcontrollers.

In this video the motor is connected across an open collector output pin, on the other hand the input, we are providing approx 500nA (.5mA) current and controlling 380mA of current across the motor. This is how small amount of base current can control much higher collector current in Darlington Transistor.

Also, as Motor is used, the pin 9 is connected across VCC to provide freewheeling protection.

The resistor is providing low pull up, making the input LOW when no current flow is coming from the source, which makes the output high impedance stopping the motor. The reverse will happen when additional current is applied across the input pin.