In the previous article, we discussed about Current Mirror Circuit and how it can be built using Transistor and MOSFET. Despite the fact that basic current mirror circuit can be constructed using two simple active components, BJTs and MOSFETs or using an amplifier circuit, the output is not perfect, as well as it has certain limitations and dependencies on the external things. So to get a stable output, additional techniques are used in current mirror circuits.

There are several options to improve the output of Current Mirror Circuit. In one of the solution one or two transistors are added over the traditional two transistors design. Construction of those circuits uses emitter follower configuration to overcome the base current mismatch of the transistors. The design can have a different kind of circuit structure to balance the output impedance.

There are three primary metrics to analyze the current mirror performance as part of a large circuit.

3. For the stable operation of current mirror circuits, the last important metric is the minimum voltages coming from the power rail connection located across the input and output terminals.

Wilson current mirror circuit uses three active devices that accept the current across its input and provide the exact copy or mirrored copy of the current to its output. 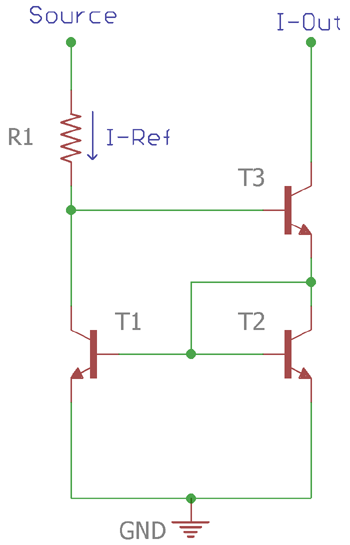 In above Wilson Current Mirror Circuit, there are three active components which are BJTs and a single resistor R1.

Two assumptions are made here – one is that all transistors have the same current gain which is and second is that collector currents of T1 and T2 is equal, as the T1 and T2 are matched and the same transistor. Therefore

And this applies for the base current too,

The base current of the T3 transistor can easily be calculated by the current gain, which is

And the emitter current of the T3 will be

If we look at the above schematic, the current across the T3 emitter is the sum of T2’s collector current and base currents of T1 & T2. Therefore,

Now, as discussed above, this can be further evaluated as

The collector current can be written as,

Again as per the schematic the current through 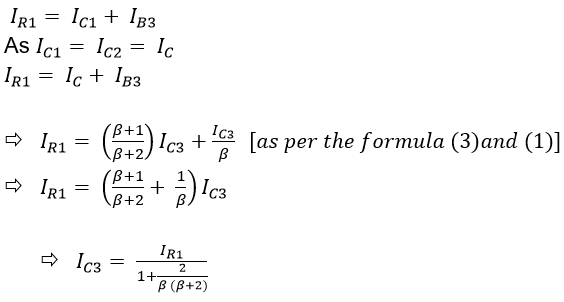 The above equation can draw a relationship between the Third transistor collectors current with the input resistor. How? If 2/ (β(β + 2)) << 1 then the IC3 ≈ IR1. The output current can also be easily calculated if the base-emitter voltage of the transistors is less than 1V.

Wilson current mirror circuit can be further improved to get perfect accuracy by adding another transistor. 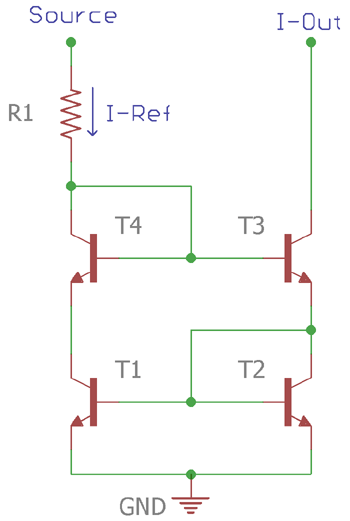 and also stabilize the voltage differences between the T1 and T2. 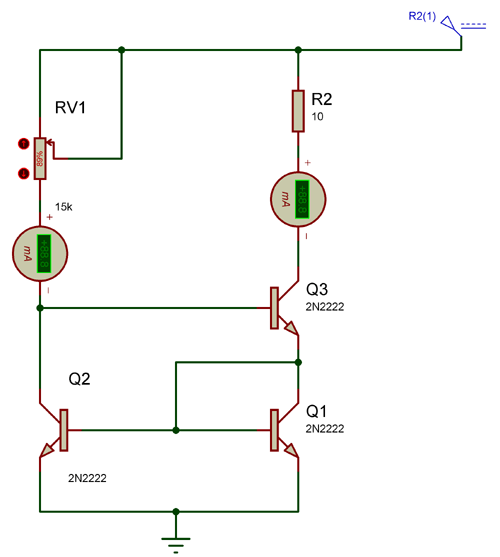 The three active components (BJT) are used to make the circuitry. The BJTs are all 2N2222, with same specifications. The pot is selected to change the current across Q2 collector which will further reflect on the Q3 collector. For the output load, a 10 Ohms resistor is being selected.

Here is the simulation video for Wilson Current Mirror Technique-

In the video, the programmed voltage across Q2’s collector is reflecting across the Q3 collector.

One of the popular application examples of Widlar current source is in the uA741 operational amplifier circuit.

In the below image, a Widlar current source circuit is shown. 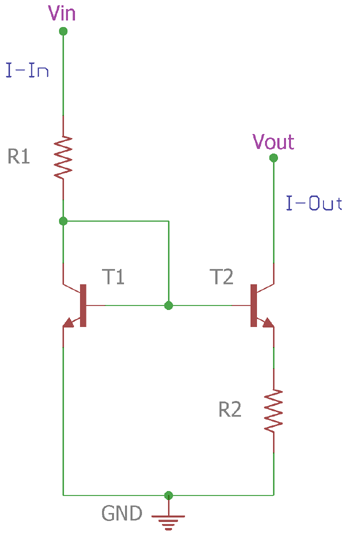 The circuit consists of only two transistors T1 & T2 and two resistors R1 & R2. The circuit is same as the two transistors current mirror circuit without the R2. The R2 is connected in series with the T2 emitter and ground. This emitter resistor effectively reduces the current across the T2 compared with the T1. This is done by the voltage drop across this resistor, this voltage drop reduces the base-emitter voltage of the output transistor which further results in reduced collector current across the T2.

As previously mentioned that the current across T2 is reduced in comparison with T1 current, that can be further tested and analyzed using Cadence Pspice simulations. Let’s see the Widlar circuit construction and simulations in the below image, 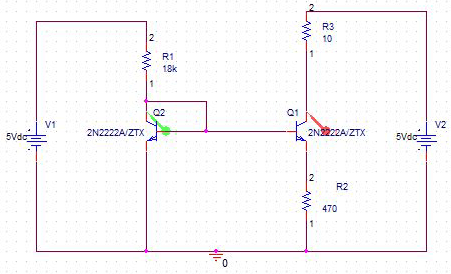 The circuit is constructed in Cadence Pspice. Two transistors with the same specification are used in the circuitry, which is 2N2222. The current probes are showing the current plot across Q2 and Q1 collector.

The simulation can be seen in the below image. 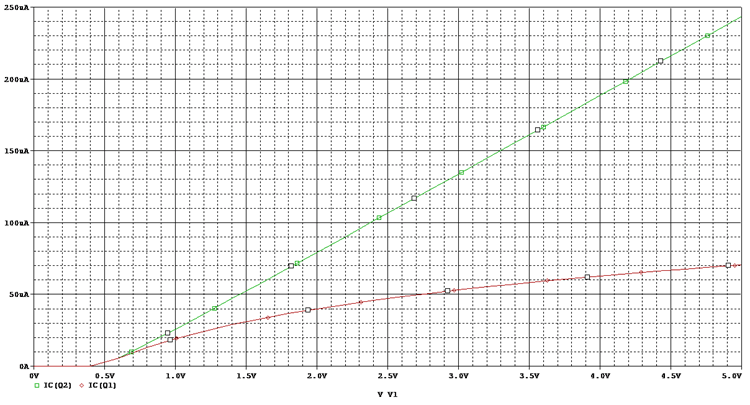 In the above figure, the red plot, which is the collector current of Q1 is reducing while compared with Q2.

Applying KVL (Kirchhoff’s Voltage Law) across the base-emitter junction of the circuit,

The final formula can be drawn from the above formula if the finite β is overruled and if we change the IC1 as IIN and IC2 as IOUT. Therefore, 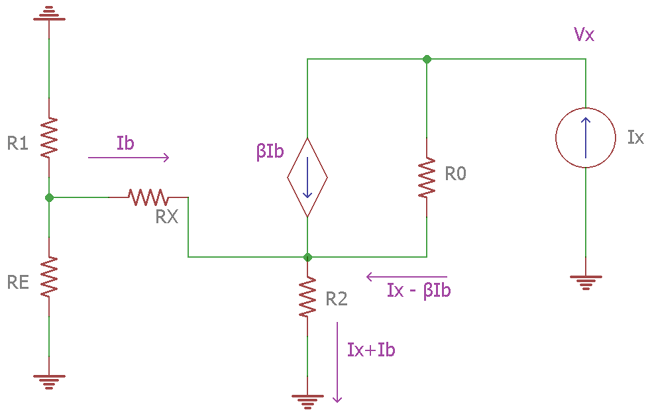 The output resistance can be determined by applying Kirchoff's law across the left ground to the R2, it is-

Again, applying Kirchhoff’s voltage law across the R2 ground to the ground of Input current,

So this is how the Wilson and Widlar current Mirror Techniques can be used to improve the designs of Basic Current Mirror Circuit. 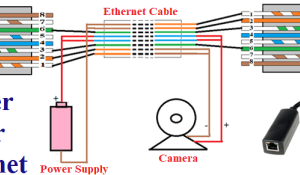 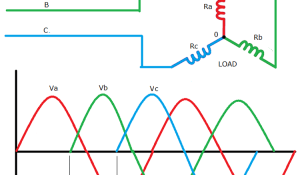