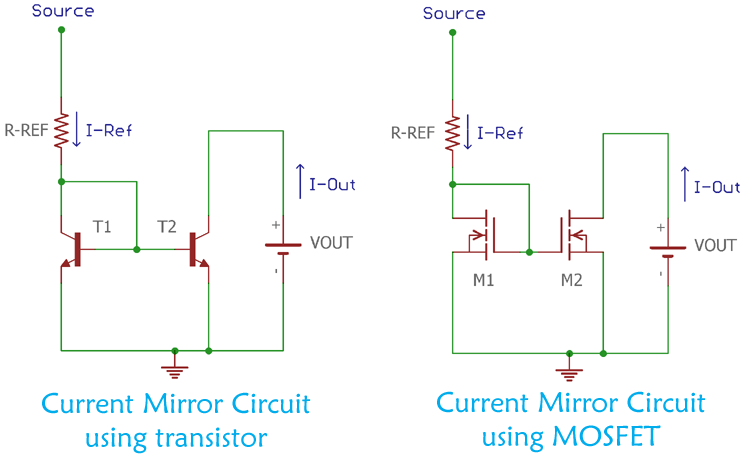 Resistance has a voltage-current relationship as per the ohms law. Thus, AC output resistance plays a major role in the stability of output current with respect to voltage changes.

A proper working mirror circuit has a low voltage drop across the output. A voltage range in which a Current Mirror Circuit can work is called compliance range, and the minimum to maximum supported voltage in this compliances range is called as compliance voltage. A minimum voltage is required to keep the transistor in active mode, so the minimum voltage depends on the transistor specifications.

The ideal circuit and the real circuit, these two are completely different. In the real world, there is nothing called perfect or ideal. However, before understanding the limitations of current mirror circuits with respect of real-world applications, one needs to understand the voltage and current source and their ideal and actual behaviors.

Same as like the ideal voltage source, irrespective of the terminal voltage the current source can deliver or accept currents. But in the real world, the voltage also affects the constant current delivery process.

In the case of current mirror circuits, the voltage and current sources are ideal. But in a real scenario they have noises, tolerance, ripples thus the output voltage varies. This all affects the current mirror output.

Not only this, but theoretically in ideal current mirror circuits, the AC impedance is accepted as infinite, but this is not the case in real world scenario. The current mirror circuit in the practical world has finite impedance which affects the current delivery process. Also the circuit implementation creates parasitic capacitance which results in frequency limitation. 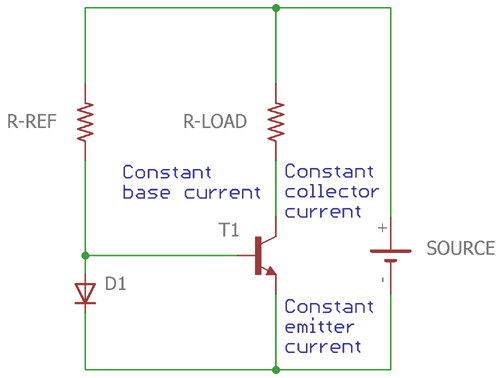 Let's consider the above image. Before understanding how the circuit works it is essential to understand the transistor operating characteristics. In the active mode operation, the transistor collector current can be calculated by multiplying the base current with the ratio of β. The ratio between emitter current and collector current is called ɑ. The relation between these two can be described using simple mathematical formation

In the previous image, a forward biased diode is used in parallel of the base-emitter junction which is providing constant voltage to the transistor. The voltage across the base-emitter is constant depending on the current flowing through the diode. However, the diode current can be controlled by the bias resistor. If the current through the diode is decreased by increasing the value of the bias resistance, the voltage drop across the diode will also reduce. By the effect of reduced base-emitter junction voltage, the emitter current will also decrease in the same proportion. One thing needs to be remembered that the ɑ and β of the transistor are constant.

This diode can be easily changed using a transistor which is same as the other counterpart.

In the below image, two transistors are shown which are used to create the current mirroring circuit. Transistor T1 and T2 need to be the same counterpart. Also, the two transistors should be placed close to each other for equal heat transfer. 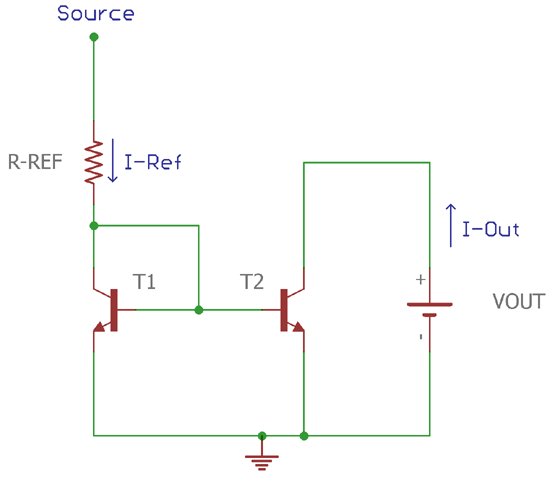 If we see the circuit carefully, the base-emitter of two transistors, T1 and T2 are in parallel with each other. Therefore, the two transistors have the same current. So, the best way to determine the output current is to add up the node current, where the IREF is flowing.

As per the Kirchhoff's law, the current at the T1 collector is –

Therefore, when both transistors work with zero base-collector bias, the base currents are equal, 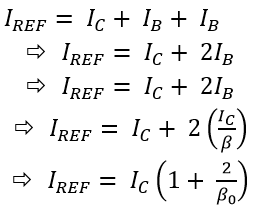 The compliance voltage, where the VDG = 0 and the current mirror behavior still works in the lowest output voltage, can be calculated like this: 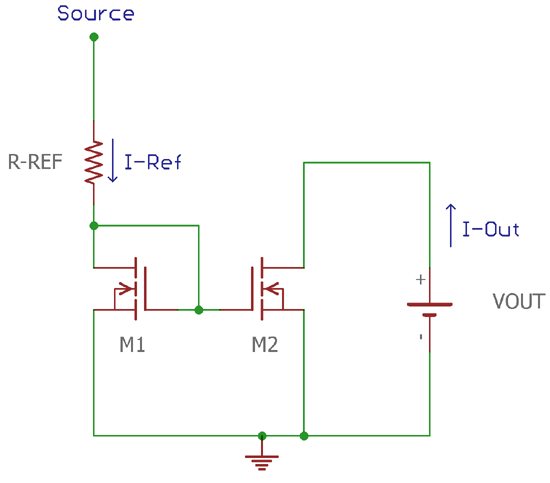 Consider the above current mirror circuit using MOSFET, the MOSFET transistor M1 is in the saturation region as the VDS ≤ VGS. For the case of MOSFET M2, it will also remain in saturation mode as long as the output voltage is greater than the saturation voltage. Therefore the input current across the M1 will control directly the output current of M2.

MOSFET device function like this, the drain current reflects the function of the gate to source and drain to gate voltage.

So, the formula can be written using the below function,

If the drain to gate voltage VDG is 0 for the MOSFET M1, the drain current of M1 will be

Therefore, f (VGS, 0) = IIN Thus, IIN sets the value of VGS.. The same gate to source voltage is reflected across the M2. So, if the M2 biased using zero

VDG and provided transistors M1 and M2 share identical properties and exact matching, then the

So the output current is mirrored as the input current, IOUT = IIN

The drain-to-source voltage can be further introduced as VDS=VDG + VGS. With this changeover, the Shichman-Hodges model can provide the approximate answer of the f(VGS,VDG):

The function can be expressed as

In the above formulas, KP is a transistor technology related constant, W/L is the ratio of Width and Length and λ is used for the modulation constant of channel length. 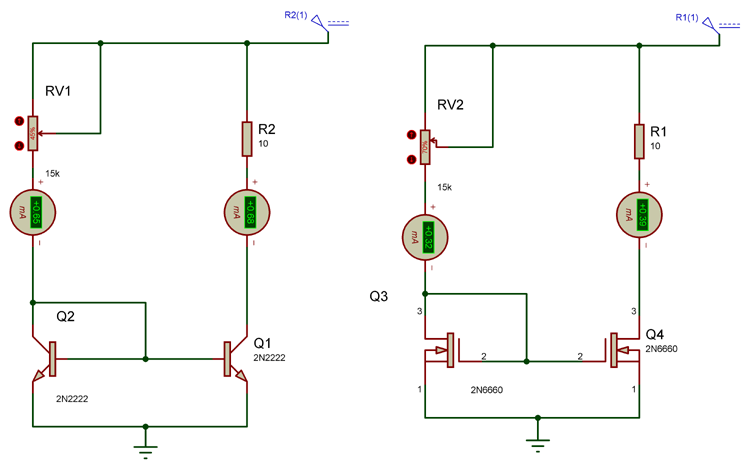 In the left side, the current mirror circuit using 2N2222 BJT is shown where two identical transistor pair is used. Instead of the programming resistor, a potentiometer is used to control the current flow in the live simulation. This same thing is created for the 2N6660 MOSFETs.

An amp meter is connected on both input and output current side. As the simulation goes, the input current is almost same and reflecting across the secondary side.

The in detail working can be seen in the Video given below.