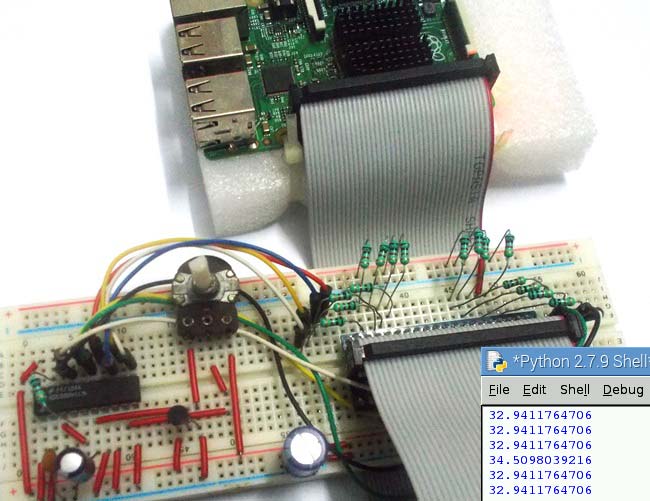 So here we are designing first application based on the previous tutorials. The first basic application is a Reading Room Temperature by Raspberry Pi. And you can monitor the Readings on computer.

As discussed in previous tutorials, there are no ADC channels provided internally in Raspberry Pi. So if we want to interface any analog sensors we need an ADC conversion unit. And in one of our tutorials we have Interfaced ADC0804 chip to Raspberry Pi to read an analog value. So go through it before building this Room Temperature Thermometer.

ADC0804 is a chip designed to convert analog signal in to 8 bit digital data. This chip is one of the popular series of ADC. It’s an 8bit conversion unit, so we have  values or 0 to 255 values. The resolution of this chip changes based on the reference voltage we choose, we will talk more about it later. Below is the Pinout of ADC0804:

Now another important thing here is, the ADC0804 operates at 5V and so it provides output in 5V logic signal. In 8 pin output (representing 8bits), every pin provides +5V output to represent logic’1’. So the problem is the PI logic is of +3.3v, so you cannot give +5V logic to the +3.3V GPIO pin of PI. If you give +5V to any GPIO pin of PI, the board gets damaged.

So to step-down logic level from +5V, we will be using voltage divider circuit. We have discussed Voltage Divider Circuit previously look into it for further clarification. What we will do is, we use two resistors to divide +5V logic into 2*2.5V logics. So after division we will give +2.5v logic to PI. So, whenever logic ‘1’ is presented by ADC0804 we will see +2.5V at the PI GPIO Pin, instead of +5V.

Now for Reading Temperature of Room, we need a sensor. Here we are going to use LM35 Temperature Sensor. Temperature is usually measured in “Centigrade” or “Fahrenheit”. “LM35” sensor provides output in degree Centigrade. 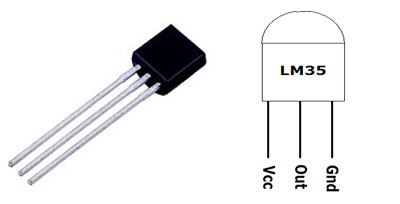 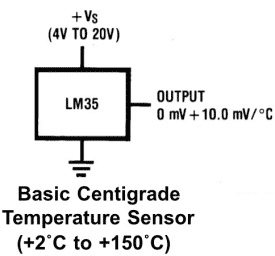 As shown in figure, LM35 is a three pin transistor like device. The pins are numbered as,

The connections which are done for Connecting Raspberry to ADC0804 and LM35, are shown in the circuit diagram below. 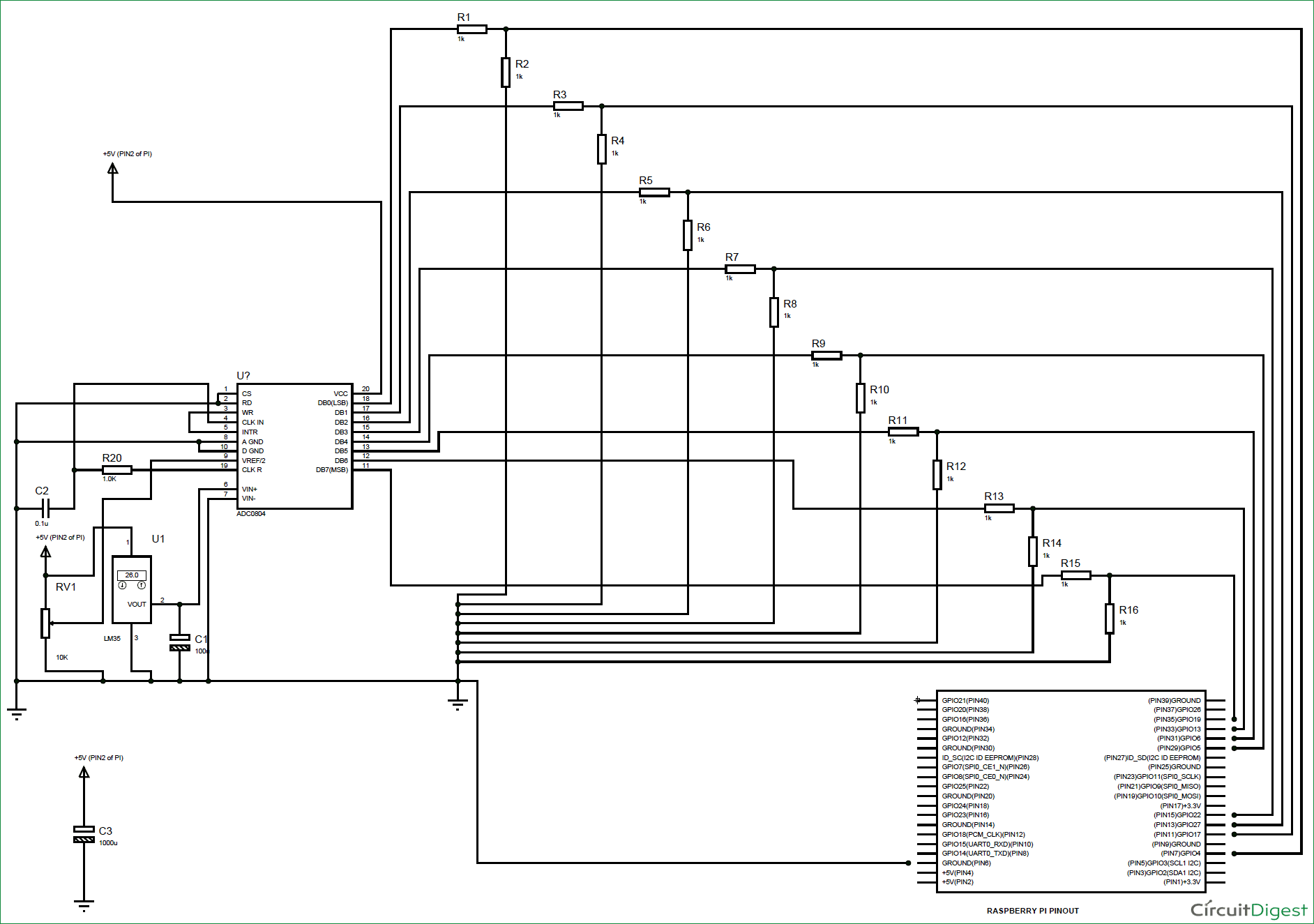 The LM35 output has lot of voltage fluctuations; so a 100uF capacitor is used to smooth out the output, as shown in the figure.

The ADC always have lots of noise, this noise can greatly affect the performance, so we use 0.1uF capacitor for Noise Filtration. Without this there will be lot of fluctuations at output.

As told earlier the LM35 provides +10mV for every centigrade. The maximum temperature that can be measured by the LM35 is 150º centigrade. So we will have a maximum of 1.5V at the LM35 output terminal. But the default reference voltage of ADC0804 is +5V. So if we use that reference value, the resolution of the output will be low because we would be using a maximum of (5/1.5) 34% of digital output range.

Luckily the ADC0804 has an adjustable Vref pin (PIN9) as shown it its Pin Diagram above.  So we will set the Vref of the chip to +2V. To set Vref +2V, we need to provide a voltage of +1V (VREF/2) at PIN9. Here we are using 10K pot to adjust the voltage at PIN9 to +1V. Use the voltmeter to get the accurate voltage.

We have previously used LM35 Temperature Sensor to Read the Room temperature with Arduino and with AVR Microcontroller. Also check Humidity and Temperature Measurement using Arduino

We are setting 8 pins as input pins. We will detect 8 bit of ADC data by these pins.

Further Explanation of Code is given in Code Section Below.

After writing the program it’s time to execute it. Before executing program, lets talks what is happening in the circuit as a Summary. First LM35 sensor detects the room temperature and provides an analog voltage at its output. This variable voltage represents the temperature linearly with +10mV per ºC. This signal is fed to ADC0804 chip, this chip converts the Analog value to digital value with 255/200=1.275 count per10mv or 1.275count for 1degree. This count is taken in by the PI GPIO. The program converts the count to temperature value and displays it on the screen. The typical temperature read by PI is shown below,

can i use Raspberry pi 3 for the same configuration?