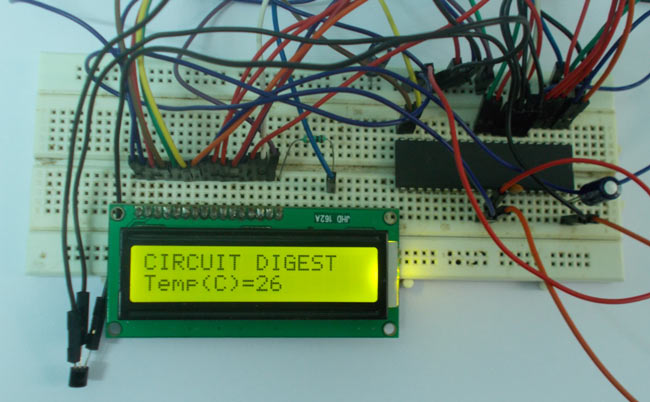 In this project we are going to design a circuit for measuring temperature. This circuit is developed using “LM35”, a linear voltage sensor. Temperature is usually measured in “Centigrade” or “Faraheite”. “LM35” sensor provides output based on scale of centigrade.

LM35 is three pin transistor like device. It has VCC, GND and OUTPUT. This sensor provides variable voltage at the output based on temperature. 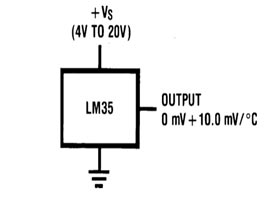 So for now with LM35 we get temperature in the form of variable voltage. This temperature dependent voltage is given as input to ADC (Analog to Digital Converter) of ATMEGA32A. The digital value after conversion obtained is shown in the 16x2 LCD as temperature.

In the circuit, PORTB of ATMEGA32 is connected to data port of LCD. Here one should remember to disable the JTAG communication in PORTC ot ATMEGA by changing the fuse bytes, if one wants to use the PORTC as a normal communication port. In 16x2 LCD there are 16 pins over all if there is a back light, if there is no back light there will be 14 pins. One can power or leave the back light pins. Now in the 14 pins there are 8 data pins (7-14 or D0-D7), 2 power supply pins (1&2 or VSS&VDD or gnd&+5v), 3rd pin for contrast control (VEE-controls how thick the characters should be shown), 3 control pins (RS&RW&E).

In the circuit, you can observe I have only took two control pins as this give the flexibility of better understanding. The contrast bit and READ/WRITE are not often used so they can be shorted to ground. This puts LCD in highest contrast and read mode. We just need to control ENABLE and RS pins to send characters and data accordingly.

So from mere observation from above table we are connecting 10 pins of LCD to controller in which 8 pins are data pins and 2 pins for control. The voltage output provided by sensor is not completely linear; it will be a noisy one. To filter out the noise a capacitor needs to be placed at the output of the sensor as shown in figure.

Before moving ahead we need to talk about ADC of ATMEGA32A. In ATMEGA32A, we can give Analog input to any of eight channels of PORTA, it doesn’t matter which channel we choose as all are same. We are going to choose channel 0 or PIN0 of PORTA. In ATMEGA32A, the ADC is of 10 bit resolution, so the controller can detect a sense a minimum change of Vref/2^10, so if the reference voltage is 5V we get a digital output increment for every 5/2^10 = 5mV. So for every 5mV increment in the input we will have a increment of one at digital output.

Now we need to set the register of ADC based on the following terms:

1.First of all we need to enable the ADC feature in ADC.

2. Since we  are measuring room temperature, we don’t really need values beyond hundred degrees (1000mV output of LM35). So we can set up maximum value or reference of ADC to 2.5V.

3. The controller has a trigger conversion feature, that means ADC conversion takes place only after an external trigger, since we don’t want that we need to set the registers for the ADC to run in continuous free running mode.

4. For any ADC, frequency of conversion (Analog value to Digital value) and accuracy of digital output are inversely proportional. So for better accuracy of digital output we have to choose lesser frequency. For lesser ADC clock we are setting the presale of ADC to maximum value (128). Since we are using the internal clock of 1MHZ, the clock of ADC will be (1000000/128).

These are the only four things we need to know to getting started with ADC. All the above four features are set by two registers.

RED (ADEN): This bit has to be set for enabling the ADC feature of ATMEGA.

LIGHT GREEN (ADATE): This bit must be set for the ADC to run continuously (free running mode).

PINK (MUX0-MUX4): These five bits are for telling the input channel. Since we are going to use ADC0 or PIN0, we need not set any bits as by the table.

BROWN (ADPS0-ADPS2): these three bits are for setting the prescalar for ADC. Sice we are using a prescalar of 128, we have to set all three bits.

DARK GREEN (ADSC): this bit set for the ADC to start conversion. This bit can be disabled in the program when we need to stop the conversion.

To make this project with Arduino, see this tutorial: Digital Thermometer using Arduino

Working of TEMPARATURE MEASUREMENT is best explained in step by step of C code given below:

#include <avr/io.h> //header to enable data flow control over pins

#include <util/delay.h> //header to enable delay function in program

itoa(COUNTA,SHOWA,10); //command for putting variable number in LCD(variable number, in which character to replace, which base is variable(ten here as we are counting number in base10))

send_a_string(SHOWA); //telling the display to show character(replaced by variable number) of first person after positioning the courser on LCD

PORTD |= 1<<RS;//telling LCD we are sending data not commands

tnx, u are so good teacher

This code doesn't work . It only shows the value 0.. Please give some advice

tnx for this post ... im want to make an egg incubator by this termometr ..

What would you use to program this type of controller?