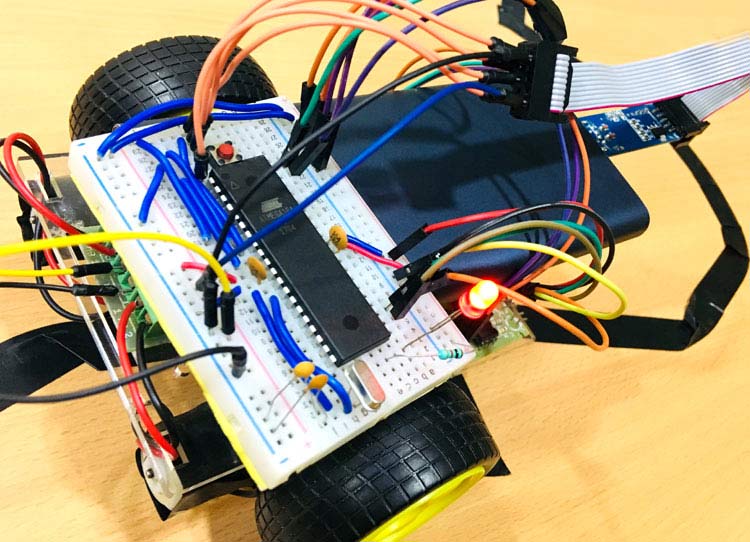 Here we will be building yet another project with AVR Atmega16 Microcontroller. If you are new to AVR microcontrollers then you can refer to previous AVR projects and tutorials.

Building a robot is always a thrill for all electronics hobbyists. And this thrill can be maximized if the robot can automatically do some things without any external instructions. One of the most commonly built robot by electronics beginners is Line Follower Robot. As the name suggests robot will follow line drawn on the surface. The line need not be a straight line. Also, lines can be of any colours.

Today we will use AVR microcontroller to build a Line follower Robot.

Mostly IR sensors are used to detect lines. The IR sensors are good in detecting white or black surfaces. Although you can use other sophisticated sensors which will be able to detect all colours and can make a robot which can follow all colour lines. The robot should be able to detect line even if the path is altered by changing the angle and keep following the line. Also, it should stop wherever the stop zone comes in the line.

Now we will use two IR sensors to check if the robot is in track with the line and two motors to correct the robot if its moves out of the track. These motors require high current and should be bi-directional; hence we use a motor driver module like L293D. We will also need a Microcontroller like ATmega16 to instruct the motors based on the values from the IR sensor. A simplified block diagram of the same is shown below.

These two IR sensors will be placed one on either side of the line. If none of the sensors are detecting a black line then AVR microcontroller instructs the motors to move forward as shown below

If left sensor comes on black line then the microcontroller instructs the robot to turn left by rotating the right wheel alone.

If right sensor comes on black line then the microcontroller instructs the robot to turn right by rotating the left wheel alone.

Connect all the components as shown below in the Circuit Diagram 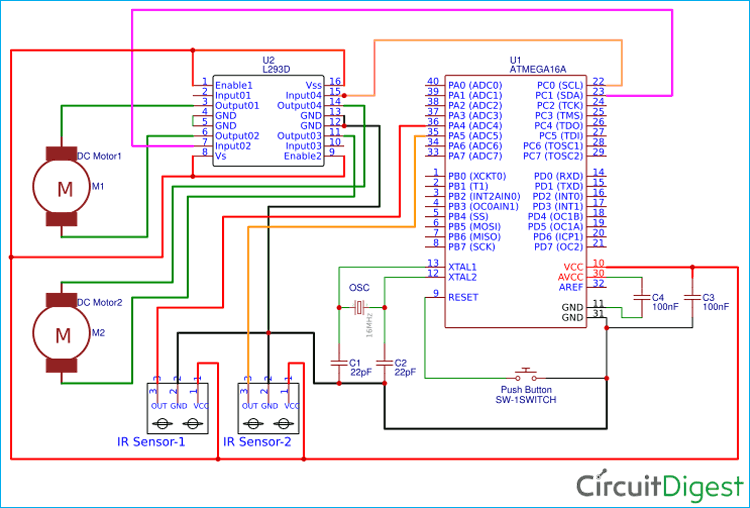 We have tried to keep the code as short and simple as we can. So we are using Macros and Special function registers in this code.

This statement checks if the PA0 where left sensor is connected is LOW or HIGH.

There are four conditions that we are following to read trough IR sensors. IR sensors are named according to their placement in frontside of the Robot. The left IR is Left sensor and right IR is right sensor. The following conditions will decide the movement of robot.

We have written the code according to above conditions. Only change is that we are using only two input pins of the L293D to drive both motors.

Complete code with a demonstration Video is given below.