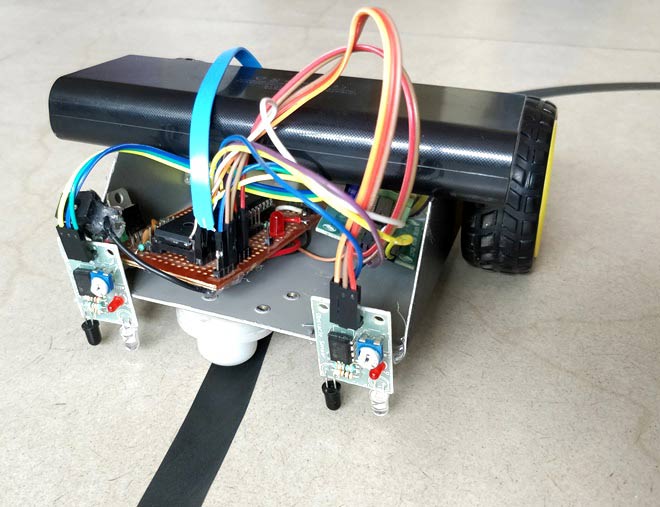 A Line Follower Robot is a simple yet fascinating robot for most students/hobbyists to build. In this tutorial we will learn How a Line Follower Robot Works and how we can build one using the PIC Microcontroller PIC16F877A. PIC16F877A is a 40-pin Multipurpose MCU from Microchip, we have used this IC in our complete PIC tutorial series. If you are new, here you might want to a look at these PIC tutorials to learn the basic of this IC and how to upload programs to the microcontroller. Since we have already covered this information in our tutorials we will skip them in the explanation below.

If you are interested in robotics then you should be very familiar with the name “Line Follower Robot”. This robot is capable of following a line, just by using pair of sensor and motors. This robot gives you room for infinite development and robots like Kiva (Amazon warehouse robot) are an example for this. You can also check our other Line Follower Robots:

Now we will use two IR sensors to check if the robot is in track with the line and two motors to correct the robot if its moves out of the track. These motors require high current and should be bi-directional; hence we use a motor driver module like L293D. We will also need a Microcontroller like PIC to instruct the motors based on the values from the IR sensor. A simplified block diagram of the same is shown below.

These two IR sensors will be placed one on either side of the line. If none of the sensors are detecting a black line them they PIC microcontroller instructs the motors to move forward as shown below

If left sensor comes on black line then the microcontroller instructs the robot to turn left by rotating the right wheel alone.

If right sensor comes on black line then the microcontroller instructs the robot to turn right by rotating the left wheel alone. 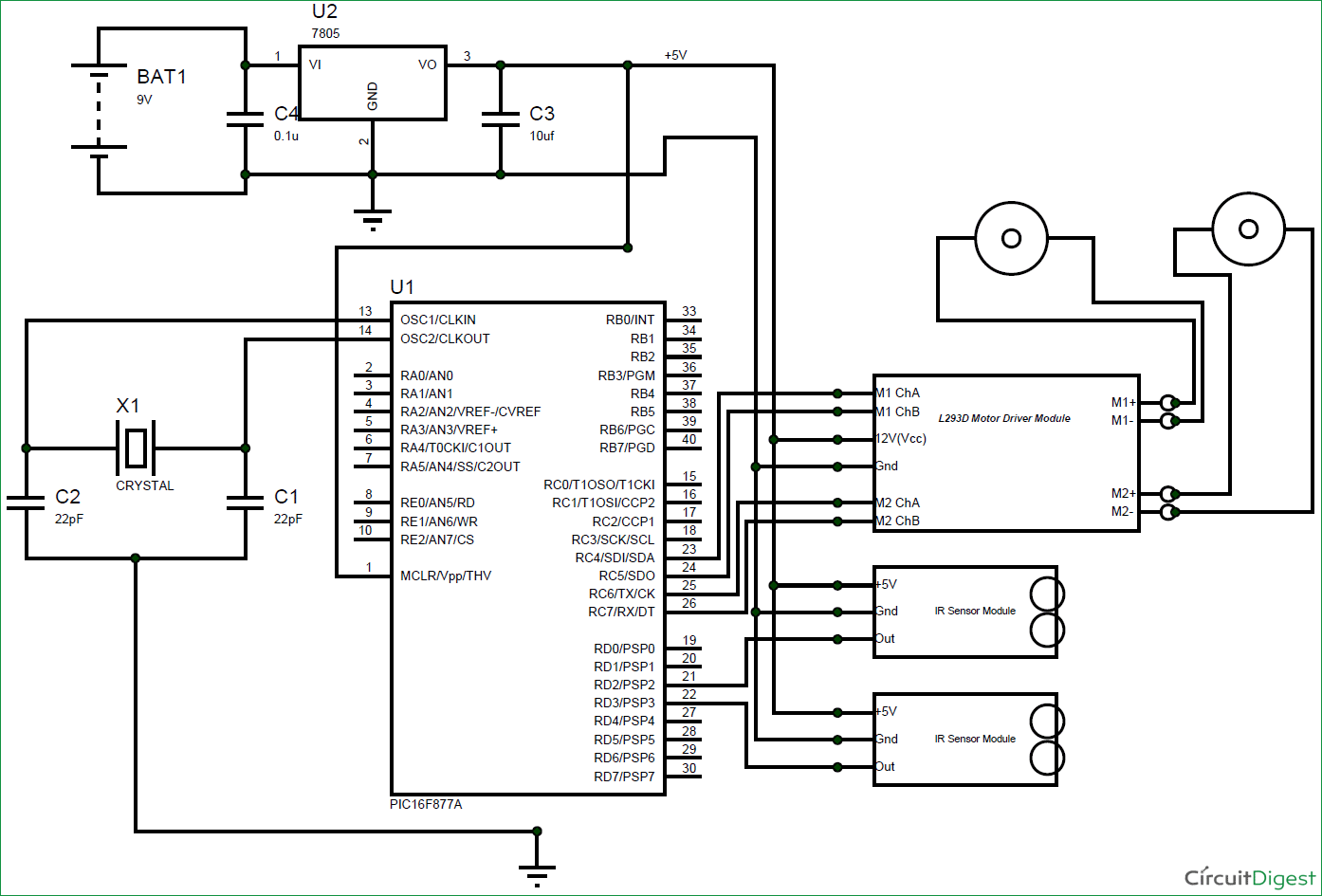 The circuit employs two IR sensors and a pair of DC gear motors along with a motor driver module as shown above. The Motor driver module used in this project is L293D, we will need a motor driver because the output pin of the PIC Microcontroller cannot source enough current for the motors to drive. This module will be powered directly from the power source (5V) as shown in the circuit. The module has four pins (two for each motor) which are connected to the PIC to control the direction of the motors. We also have two IR sensors which act as an input to the PIC microcontroller.  These sensors will go high (1) if they are over a white surface and will go low(0) when over a black surface. The complete pin connections are illustrated in the table below.

In the actual hardware I have used a power bank which will give an output of + 5V directly through its USB port; hence I have bypassed the 7805 voltage regulator and powered the PIC, sensors and Motors using the same. You can do the same of use a 12V battery along with a regulator as shown in the circuit. 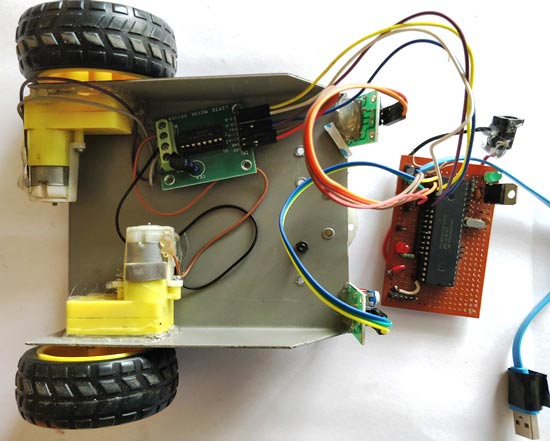 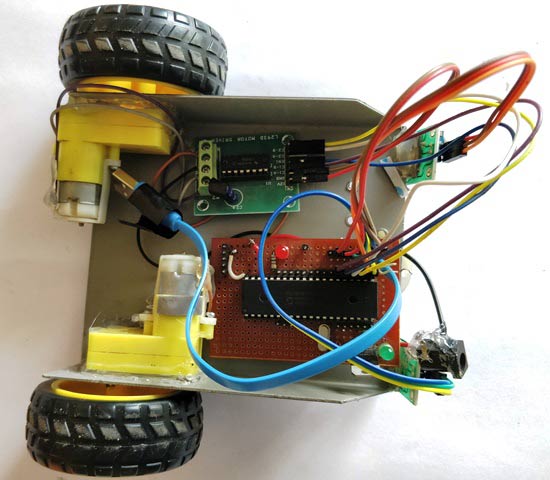 Once you are ready with your Hardware it is time to start programming. The complete program of this PIC Line Follower Robot Project is given at the end of this page. However the important chunks are explained below.

Initialize the I/O pins by the following lines. The 2 IR sensor pins act as input and the four motor pins acts as output pins.

Now, we have to read the status of both the IR sensor and control the motor accordingly. For example if the both the sensors are high (does not come under black line) then we move both the motors forward as shown in the program below.

If the left sensor comes over the black line then we make a right turn by holding the Motor 1 still and rotating the Motor 2 in forward direction. This type of turning is called as differential turning.

Similarly, if the right sensor comes over the black line then the bot is made to take a left turn by holding the second motor still and rotating the first motor alone in forward direction as shown below.

Finally if both the sensors come under a black line then its time to stop the bot. This can be done by making all the pins of both the motors high. The code to do the same is shown below

That is it the program is ready and can be uploaded to the PIC using any programmer like PicKit.

Once the hardware and code is ready, its time for some action. As said earlier I have used a Power bank to power the bot, so all I have to do is simply connect the power bank to the bot which has the hardware set up and code already uploaded.

The PIC Perf board was made for our PIC tutorial series, in which we learnt how to use PIC microcontroller. You might want to go back to those PIC Microcontroller tutorials using MPLABX and XC8 if you do not know how to burn a program using Pickit 3, since I will be skipping all those basic information.

Now, simply launch the bot over a black line and you should watch it following the line.

You might face some difficulties in the beginning in that case read further. If the wheels rotate in opposite simply interchange the polarity of the motor who’s wheel is rotating in opposite direction. If the bot deviates from the line, interchange the IR sensor and all should be good.

The complete working of the bot can be found at the video given below. Hope you like the project and enjoyed building something similar. If you have problem in getting this to work you can post them in the comment section below to get it resolved or use ours forums to discuss technical contents.

This given program is giving errors in compiling.

There are some components in

There are some components in the pictures but they are all missing from the circuit diagram, like that led and that resistor...  If someone builds the car using the provided circuit diagram, it won't work.....