Line follower robot is one of the popular robotics projects among students and beginners because of its simplicity. It follows a line, either black or white, depending on how you program your microcontroller. Here we make a line follower robot using MSP430 launchpad from Texas Instruments, which follows the black line. If you are new to MSP430 launchpad, please read our Getting stared with MSP430 Tutorial. 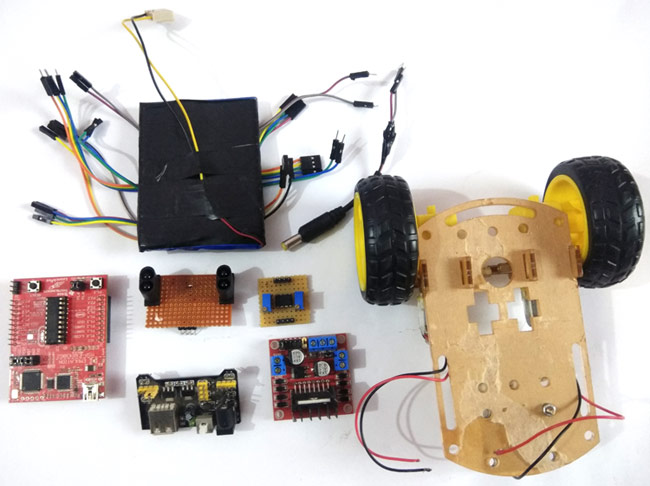 In this MSP430 based line follower robot we have used IR Transmitters and IR receivers also called photo diodes. They are used for sending and receiving light. IR transmits infrared lights. When infrared rays falls on white surface, it’s reflected back and caught by photodiodes which generates some voltage changes. When IR light falls on a black surface, light is absorb by the black surface and no rays are reflected back, thus photo diode does not receive any light or rays. To Learn more about IR sensors, follow the link.

Here in this MSP430 based line follower robot when sensor senses white surface then MSP gets 1 as input and when senses black line MSP gets 0 as input.

We can divide the whole line follower robot into various sections like sensor section, control section and driver section.

Sensor section: This section contains IR diodes, potentiometer, Comparator (Op-Amp) and LED’s. Potentiometer is used for setting reference voltage at comparator’s one terminal and IR sensors sense the line and provide a change in voltage at comparator’s second terminal. Then comparator compares both voltages and generates a digital signal at output. Here in this circuit we used two comparator for two sensors. LM358 is used as comparator. LM358 has inbuilt two low noise Op-amp.

If left sensor comes on black line then robot turn left side.

Circuit for this MSP430 Line Follower Robot is very simple. The output of comparators is directly connected to MSP430 Launchpad’s digital pin number p1_3 and  P1_4. And motor driver’s input pin IN1, IN2, IN3 and IN4 are connected at MSP430 Launchpad’s digital pin P1_5, P2_0, P2_1, P2_2 respectively. One motor is connected at the output pin of motor driver OUT1 and OUT2, and another motor is connected at OUT3 and OUT4. Here we have used 3.3v supply for power the whole circuit except Motor Driver module. We have supplied 8v to Motor driver module. The user can use 5v-12v. 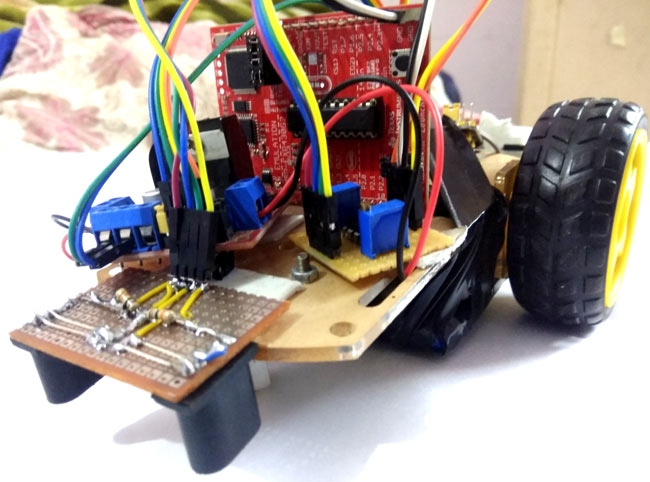 You can also build your own IR module, like I built on Perf Board. Below is the circuit for IR Module: 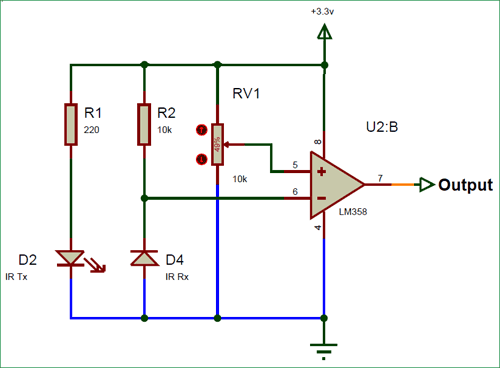 Complete Program and Video can be found at the end of this Article.

In a program, first of all, we define the input and output pin for sensor and motors. Then define some macros for the direction of line follower and then write a directive to select sensor output

Note:  Sensor may be active low or active high so first check what is the output of sensor then select directive by commenting or uncommenting activeLowMode. For active HIGH, comment the activeLowMode macro.

After that, in setup function, we give direction to sensor and motor pin. And then in the loop function, we check inputs and send output to motor driver module to run the motors.

There are four conditions in this line follower that we read by using MSP430 Launchpad. We have used two sensors namely the left sensor and the right sensor.

Program is written according to the above table conditions. Check the complete Code and Demonstration Video below.