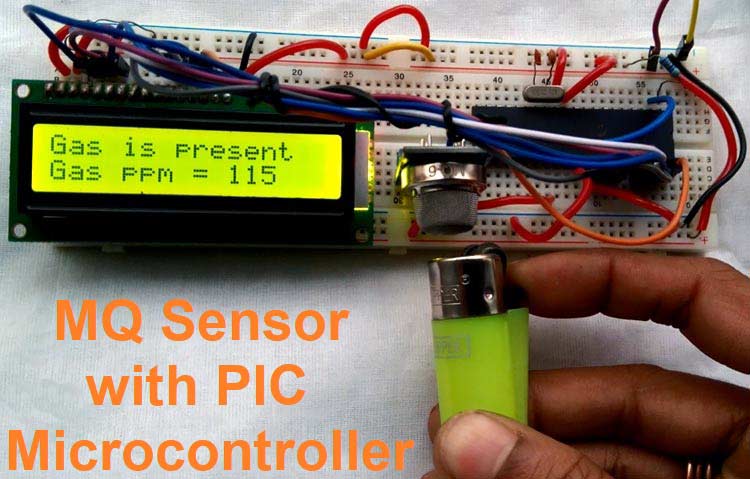 MQ series Gas sensors are very common types of sensors used in Gas Detectors to detect or measure certain types of Gases. These sensors are widely used in all Gas related devices like from simple Smoke Detectors to Industrial Air Quality Monitors. We have already used these MQ gas sensors with Arduino to measure some harmful gases like Ammonia. In this article, we will learn how to use these gas sensors with PIC Microcontrollers, to measure the PPM value of the gas and display it on a 16x2 LCD.

As mentioned earlier, there are different kinds of MQ series sensors available in the market and each sensor can measure different types of gases as shown in the table below. For the sake of this article, we will be using the MQ6 Gas sensor with PIC that can be used to detect the LPG gas presence and concentration. However, by using the same hardware and firmware other MQ series sensors can also be used without major modification in the code and hardware part.

The below image shows the MQ6 sensor pin diagram. However, the left image is a module-based MQ6 sensor for interfacing with the microcontroller unit, the pin diagram of the module is also shown in that image.

Pin 1 is VCC, Pin 2 is the GND, Pin 3 is the Digital out (Logic low when gas is detected.) and Pin 4 is the Analog output. The pot is used to adjust the sensitivity. It is not RL. The RL resistor is the right resistor of the DOUT LED. 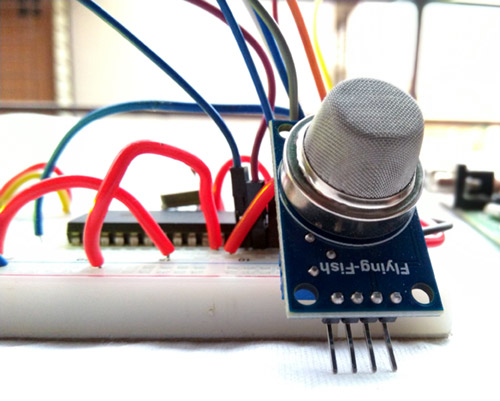 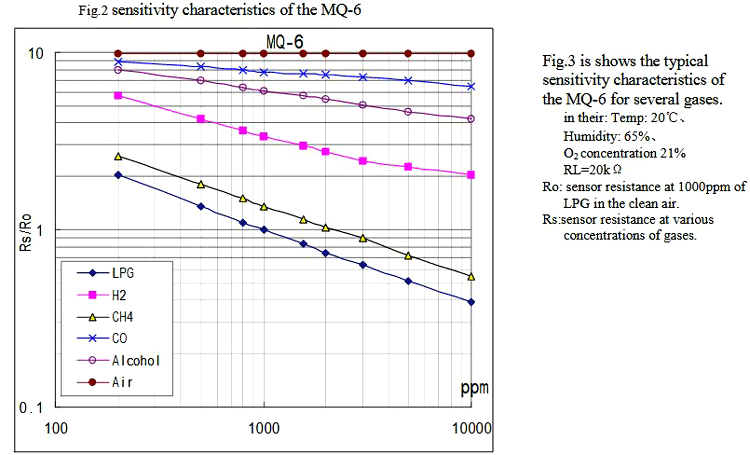 So, we need to plot this graph into our firmware similar to what we did in our Arduino Gas detector Project. The formula is to have 3 different data points. The first two data points are the starting of the LPG curve, in X and Y coordinates. The third data is the slope.

The graph we need can be given as

For other MQ sensors, get the above data from the datasheet and the Logarithmic graph plot. The value will differ based on the sensor and gas measured. For this particular module, it has a digital pin that only provides information about gas present or not. For this project, it is also used. 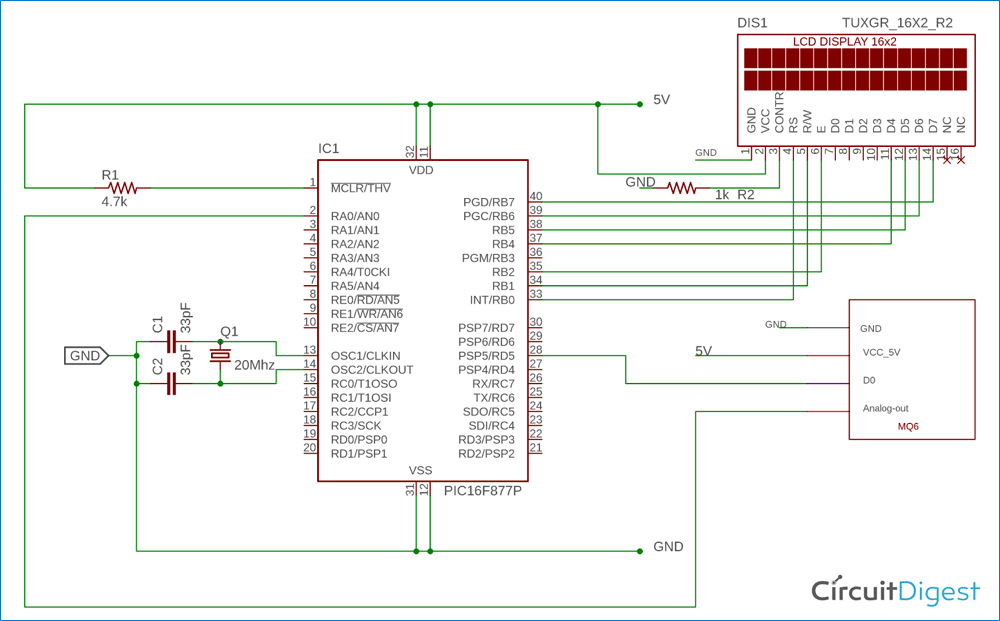 The schematic for this Gas sensor with a PIC project is pretty straight forward. The Analog pin is connected with the RA0 and the digital one with the RD5 to measure the analog voltage provided by the Gas sensor module. If you are completely new to PIC, then you might want to look into PIC ADC tutorial and PIC LCD tutorial to better understand this project.

The circuit is constructed in a breadboard. Once the connections were completed, my set-up looks like this, shown below.

The main part of this code is the main function and other associated peripheral functions. The Complete program can be found at the bottom of this page, the important code snippets are explained as follows

The below function is used for getting the sensor resistance value in free air. As the Analog channel 0 is used, it is getting data from the analog channel 0. This is for calibrating the MQ Gas sensor.

The below function is used to calculate the resistance from the voltage divider resistor and the load resistance.

Change this value after checking the onboard load resistance. It can be different in other MQ sensor boards. To plot the available data into the log scale, the below function is used.

The curve is the LPG curve defined in above of the code that is previously calculated in our article above.

Finally, the main function inside which we measure the analog value, calculate the PPM and display it on the LCD is given below

I have used a lighter to check if the PPM value is changing when the gas is detected. These cigar lighters have LPG gas inside them, which when released in the air will be read by our sensor and the PPM value on the LCD changes as shown below. 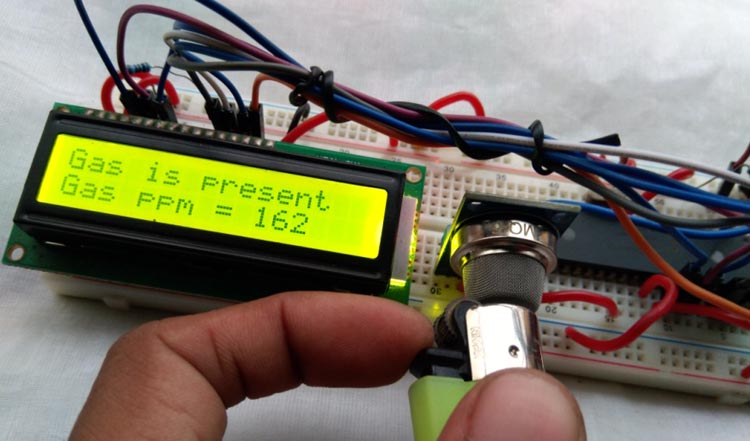 The complete working can be found in the video given at the bottom of this page. If you have any questions please leave them in the comment section, or use our forums for other technical questions.

Gas detection PPM  this project is not working  can you help me.

What compiler did you use. Having trouble getting project to compile. Also the lcd.h, curious as to the lcd_print_number function. You say complete code down by video. No such thing, or at least I can't find it.

Which compiler you are using?

Which compiler you are using? Kindly send the complete code along with the .h files. Please let me know in detail.

Ya me funciona perfectamente

Ya me funciona perfectamente

Congratulations for all posts

Congratulations for all posts. I would like to get the support codes (LCD && ADC)as well as details of the lcd_print_number() function. Thanks!

You can use these two

You can use these two tutorials to understand ADC and LCD concepts.