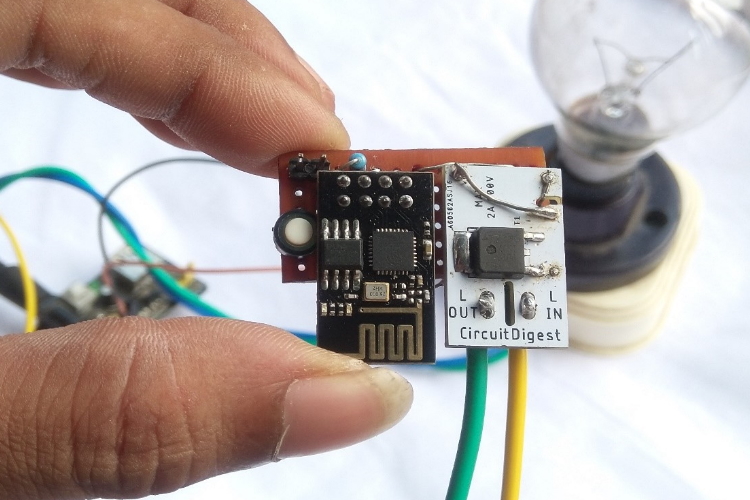 Relays are common in many switching circuits where controlling (turning ON or OFF) an AC load is required. But due to the electromechanical characteristic, a mechanical relay has a self-life, and also it can only toggle the status of the load and cannot perform other switching operations like dimming or speed control. Apart from this, an electromechanical relay also produces click sounds and high voltage spark when huge inductive loads are turned ON or OFF. You can check out the article on Working of Relays to know more about relays, its construction, and types.

In this project, we will make a Solid-State Relay using a single component and we will control an AC load in 230VAC operation. The specification used here is limited, we have chosen 2A of Load to be operated using this Solid-State-Relay. The aim is to build a compact PCB for a solid state relay that could be directly interfaced and controlled with the 3.3V GPIO pins of Nodemcu or ESP8266. To accomplish that we have fabricated our PCB boards from PCBWay and we will assemble and test the same in this project. So let's get started !!!

The main component is the ACS Triac or ACST for short. The part number of the ACST is ACST210-8BTR. However, the resistor R1 is used to connect the microcontroller or secondary circuit (control circuit) GND with the AC Neutral. The value of the resistor can be anything in between 390R-470R or can be used more slightly than that also.

For more information about the working of the circuit, it is described in the section below. As mentioned earlier, the main component is the T1, ACST210-8BTR. ACST is a type of TRIAC and is also called triode for alternating current.

How does an ACS TRIAC (ASCT) Work?

Before understanding how an ACST works, it is important to understand how TRIAC works. TRIAC is a three-terminal electronic component that conducts current in either direction when triggered using its gate. Thus it is called a bidirectional triode thyristor. TRIAC has three terminals where "A1" is Anode 1, "A2" is Anode 2, and "G" is Gate. Sometimes, it is also referred to as Anode 1 and Anode 2 or Main Terminal 1 (MT1) and Main Terminal 2 (MT2) respectively. Now, the gate of a TRIAC needs to be provided a small amount of current from the AC source using Opto thyristors, for example, such as MOC3021.

But, the ACST is a bit different from normal TRIAC. ACST is a type of TRIAC from STMicroelectronics but it can be directly interfaced with a microcontroller unit and can be triggered using a small amount of DC without needing an optocoupler. As per the datasheet, the ACST does not require any snubber circuit also for 2A of Inductive Load. 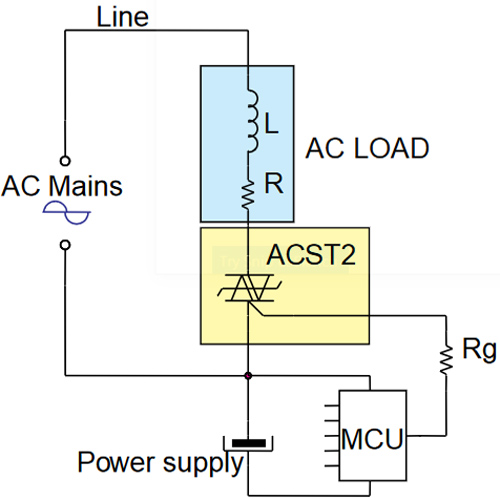 The above circuit is an illustration of the application circuit of ACST. The Line is the LIVE Line of the 230VAC and the Neutral line is connected with the common pin of the ACST. The gate resistor is used to control the output current. However, this resistor can also be used in the Neutral line with the ground or can be eliminated depending on the MCU current output. 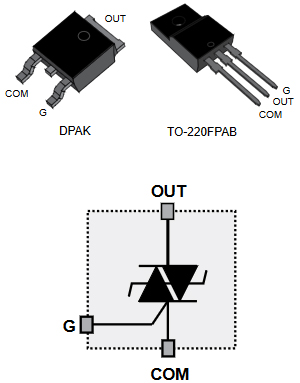 As we can see, instead of T1 and T2 (Terminal 1 and Terminal 2), the ACST has Out and Common pins. The common pin needs to be connected with the ground pin of the microcontroller. Thus, it is not acting as bidirectional as the TRIAC. The load should be connected in series with the ACST. 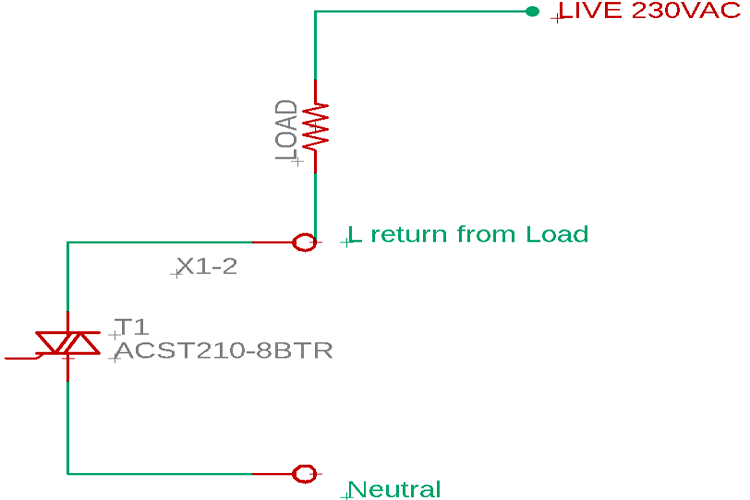 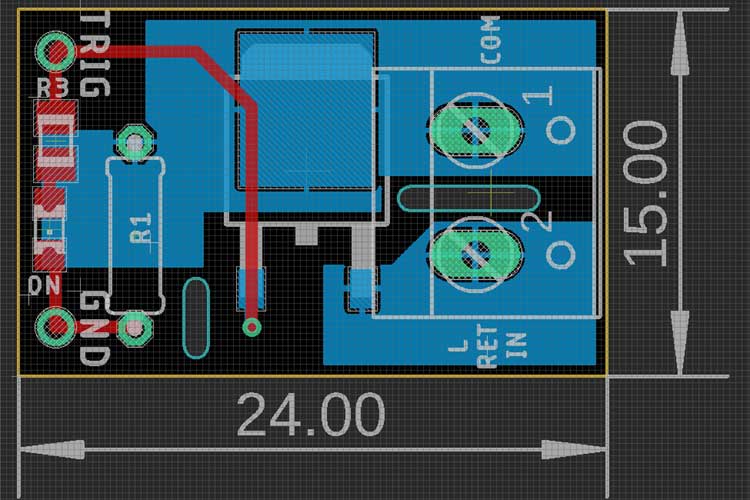 The PCB is designed in 24mm / 15mm size. The adequate heatsink is provided across the ACST using the copper layer. However, the updated Gerber for this PCB is provided in the link below. The Gerber is updated after the testing because there were some design mistakes.

During the test, the same size PCB with the different circuit is used where a provision of MOC3021 is given but it is later removed in the updated Gerber.

The complete PCB design including the Gerber file and schematic can be downloaded from the link below. 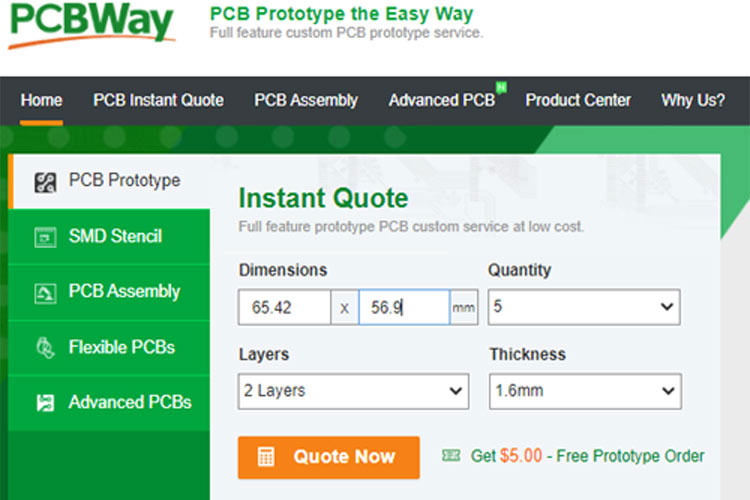 Step 2: Proceed by clicking on the ‘Quote Now’ button. You will be taken to a page where to set a few additional parameters like the Board type, Layers, Material for PCB, Thickness, and more, most of them are selected by default, if you are opting for any specific parameters, you can select it in here. 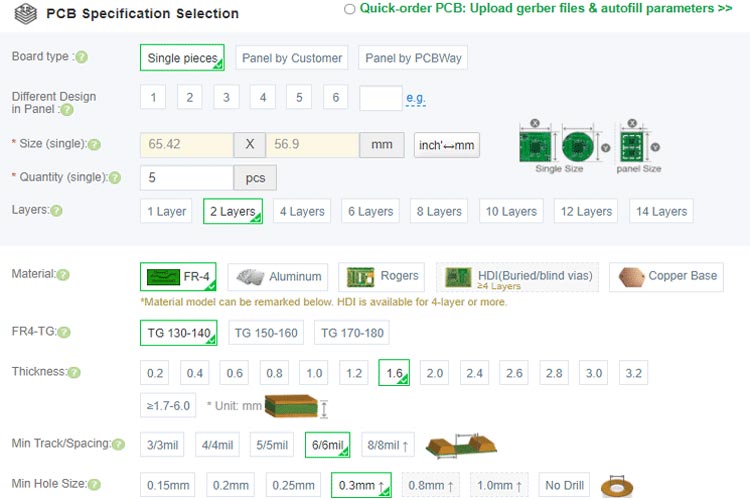 After a few days, we received our PCB in a neat package and the PCB quality was good as always. The top layer and the bottom layer of the board are shown below.

Since this was the first time for me to work with ACST, things did not go as per plan as I told earlier. I had to make some changes. The final circuit after making all the changes are shown below. You need not worry about the changes because they are already made and updated on the Gerber file that you downloaded from the above section.

The code is simple. Two GPIO pins are available in ESP8266-01. GPIO 0 is selected as a button pin and GPIO 2 is selected as the Relay pin. When the button pin is read, if the button is pressed, the relay will change the state ON or OFF or vice versa. However, for trouble-free operation, a debounce delay is also used. You can learn more about switch debouncing in the linked article. Since the code is very simple, we will not be discussing it here. The complete code can be found at the bottom of this page. 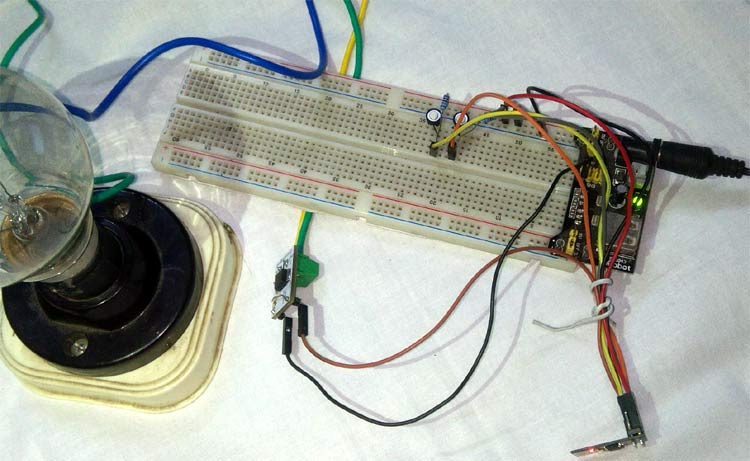 The circuit is connected with the ESP8266-01 with a 3.3V power source. Also, a 100-Watt Bulb is used for testing purposes. As you can see in the above image, I have powered our ESP module with a breadboard power supply module and used two buttons to turn our load on and off. 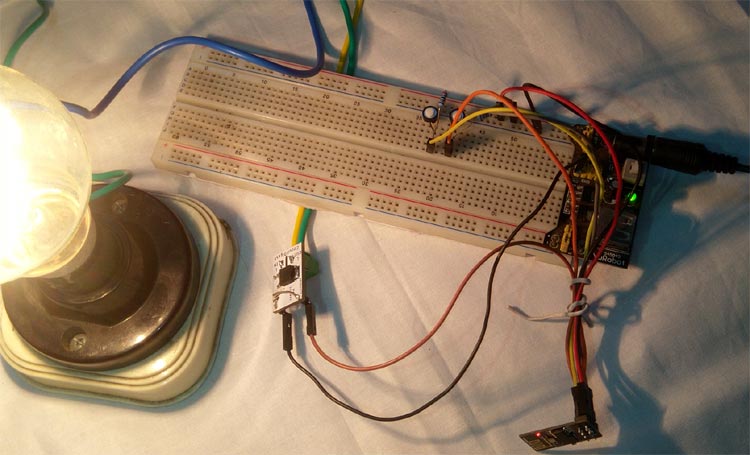 When the button is pressed, the Light is turned ON. Later after testing, I soldered both the solid-state relay and ESP826 module onto a single board to achieve a compact solution as shown below. Now for demonstration purposes, we have used a push button to turn on the load but in the actual application, we will turn it on remotely by writing our program accordingly. 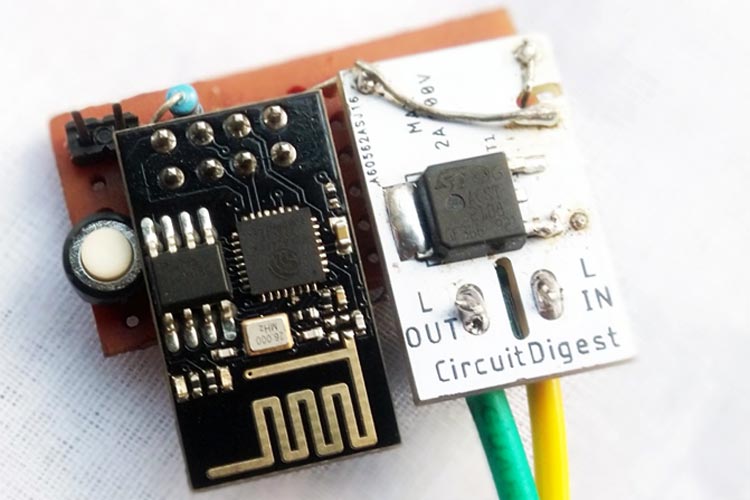 The full explanation and working video can be seen in the link below. Hope you enjoyed the project and learned something useful, if you have any questions, please leave them in the comment section below or use our forums to start a discussion on this.

When using normal triac (Q4004L4), do you mean to connect the ground supply of esp8266 to neutral of AC lines? I am scared of doing that I am not sure if it is safe.

I would like to know if this is for UK or USA? In USA we cannot get 230 with one line and a nuetral. Is there something I am missing here? Thanks for your patience

Thanks for the info and very

Thanks for the info and very well explained. I would love to build one.
Just one question is it OK to use the BT136 in place of the ACST and do we still need to have the Neutral and gnd lines connected? Since, BT136 is easier to get and cheaper too.
Thanks again.