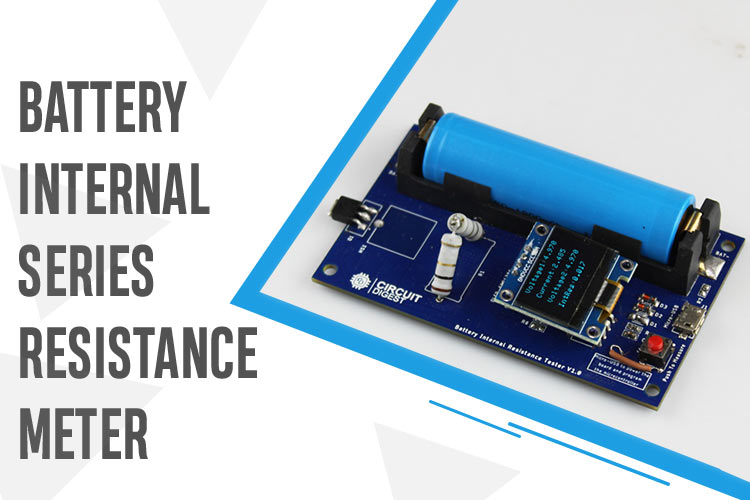 In an ideal scenario, a battery should have zero internal resistance. But batteries are not made perfect and the electrodes are not 100% conductive, which creates a small resistance within the battery called internal resistance. Practically batteries will always have some internal resistance. On paper, the value of the resistance will appear low around 0.1Ω for an AA alkaline battery, about 1Ω for a 9-volt alkaline battery, and 20 to 30mΩ for a lithium polymer battery, it could have a significant impact if a high load is attached to the battery. Know more about different types of batteries. So in this article, we have decided to build a simple Attiny85 Based Battery ISR Meter that will accurately measure the internal resistance of any Lithium cell and display the result on an OLED Display. The complete meter is build on a PCB fabricated by pcbway, more on that will be discussed later in this article.

Previously we have built many different projects on measuring instruments, you can check the list below if you are interested.

How Does an Internal Series Resistance(ISR) Meter Work?

So in the introduction part, you know what will be the objective of the project, now the question remains, how do you measure resistance which is inside the battery cell? The answer to this question is simple, we do it with the help of a potential divider or voltage divider! Yes, you heard that right. We will be using a voltage divider and ohm's law formula to measure the internal resistance of the battery. But for that, we need a known value resistor (we are using a 2 OHM resistor) and a multimeter. In the section below, we have shown you how you can do that.

The resistors you can find in the market are not accurate and they have tolerances, which is why the value of the resistor can change depending on the temperature. Now the resistor we are using has a 5% tolerance. 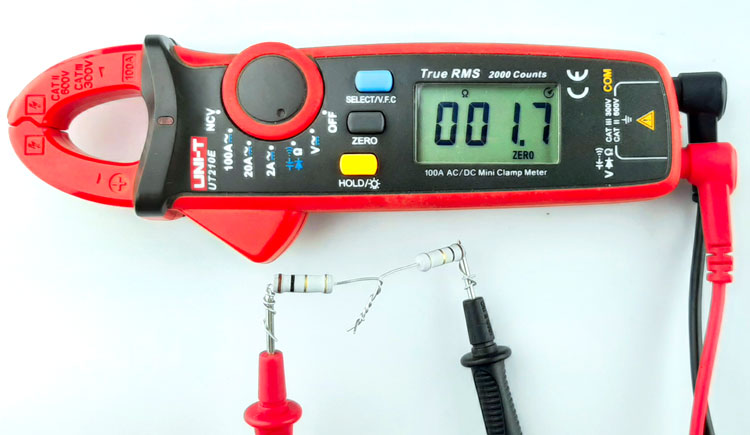 Now as you can see the resistor shown above measures 1.7 Ohms but we need to take into consideration the multimeter tolerance and the resistor tolerance. After considering that we found out that our theoretical 2 ohms resistor has a resistance value of 1.2 Ohms so we'll be using the 1.2 Ohms value in the calculation.

Note: Multimeters are not usually good at measuring resistance but what they are good at is measuring voltage. So what you can do is use a constant current source to flow 500mA or 1A through the resistors and measure the voltage drop across the resistor. This way you can get a pretty decent measurement of the resistance.

Now we need to measure the no-load voltage of the battery, as you can see in the image below. 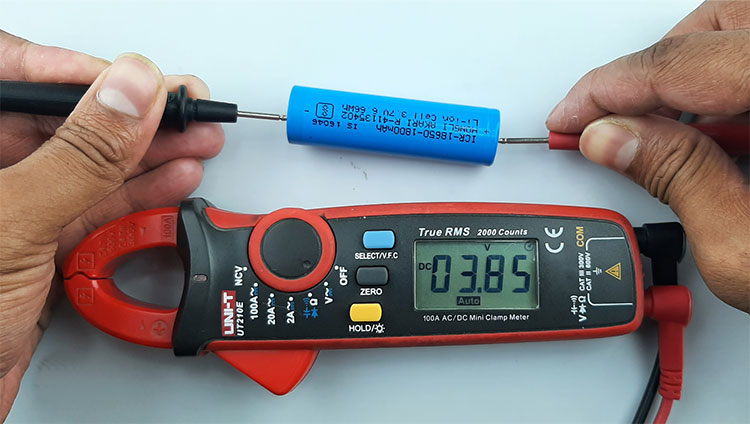 The battery voltage is 3.85 volts. Now we need to calculate the theoretical current that will flow through the resistor if we connect it with the battery, for that we are going to be using Ohm's law.

Current through the resistor I = V/R,

if we connect the resistor to the battery, 3.22 Amps will be drawn by the 1.2 Ohm resistor. When the load is connected we also need to measure the voltage. 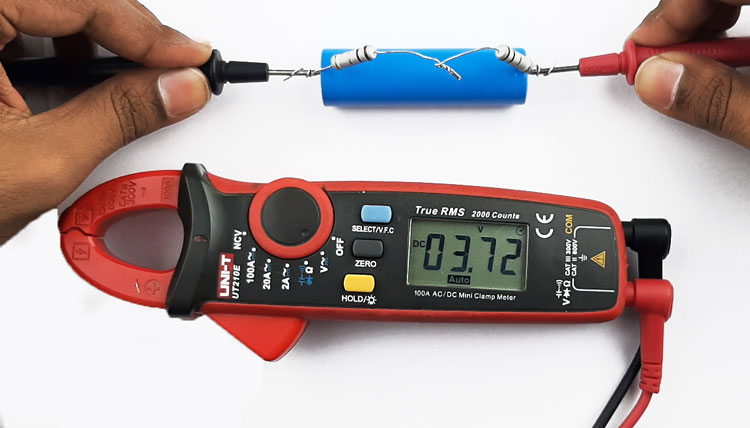 You can see in the image above, the load Voltage is Vload = 3.72. We need to subtract these two voltage values, the open circuit voltage, and the load voltage. If we do that, we will get the voltage drop across the internal resistance.

The calculated internal resistance of the battery is 0.04017 mOhms. Let's test our calculated voltage with the professional meter bought from the market.

As you can see in the image above, we are pretty close to the measured value by the professional ISR meter.

The components required to build the ATtiny85-based ISR meter are listed below. We designed this circuit with very generic components, which makes the replication process very easy.

The complete circuit diagram of the ATtiny85 microcontroller-based ISR Meter is shown below. 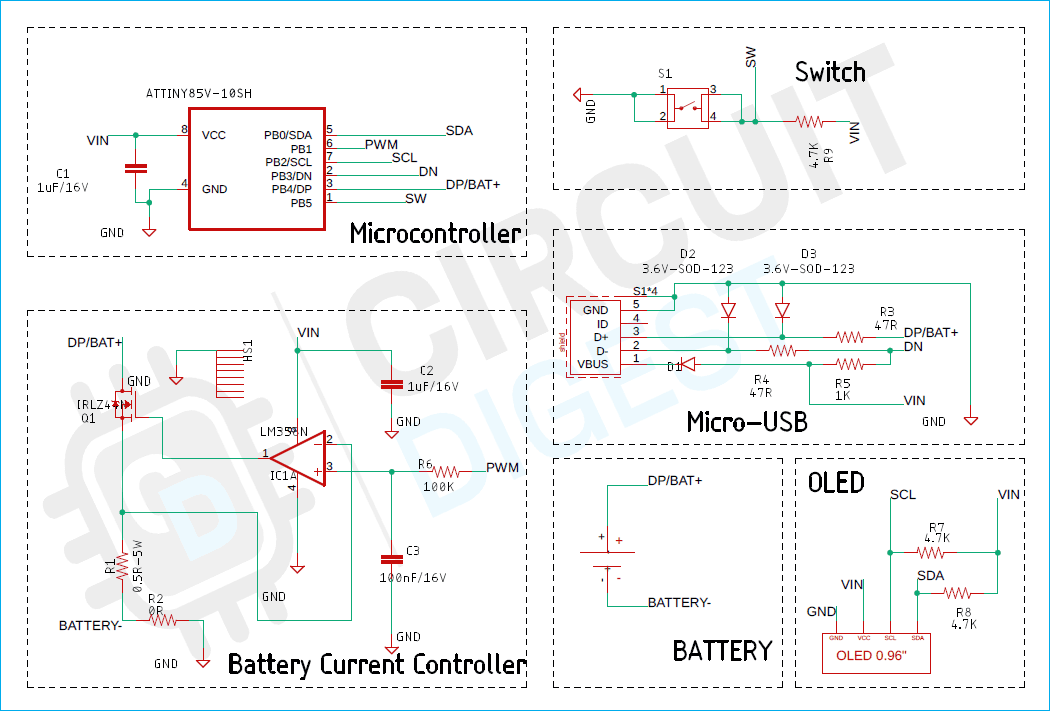 PCB Design of the ATtiny85 Based ISR Meter

To make our life a little bit easier, we decided to make a PCB for the project. 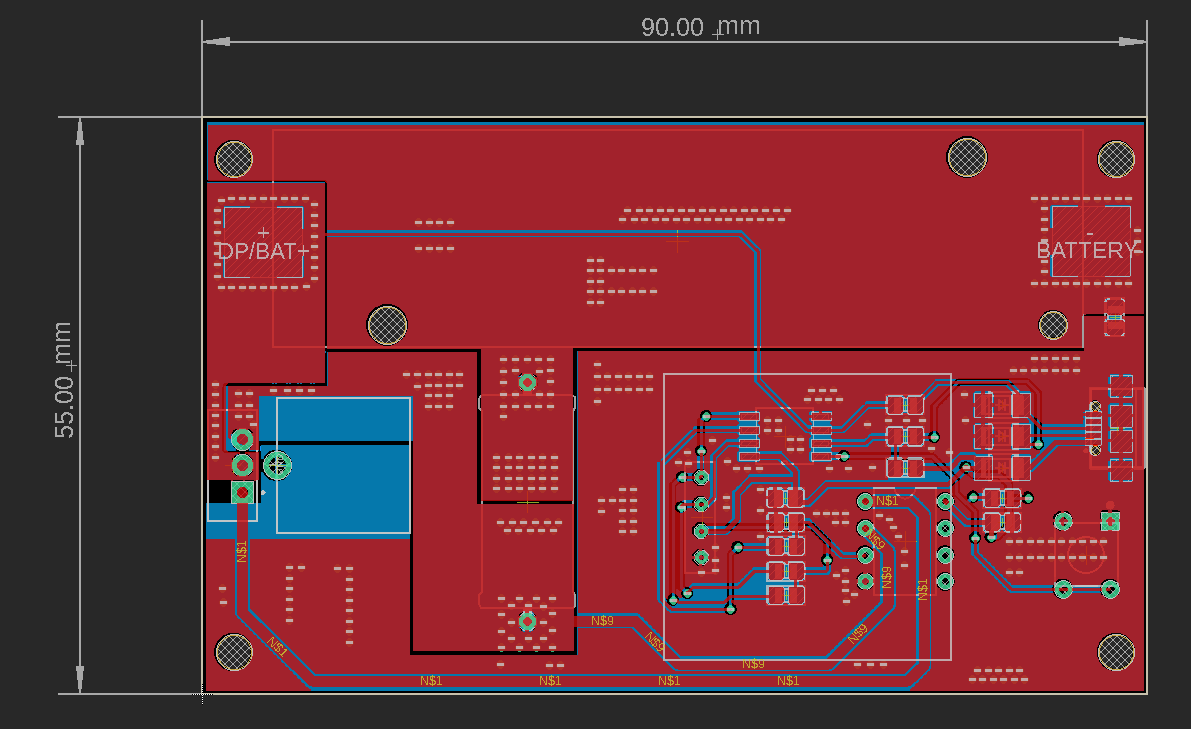 As you can see in the above image, the PCB is designed with EAGLE PCB design software and it has a dimension of 90mm X 55mm. If you want to recreate the project yourself, you can download the Gerber files and order the PCB for yourself.

Top Side of the ISR Meter PCB 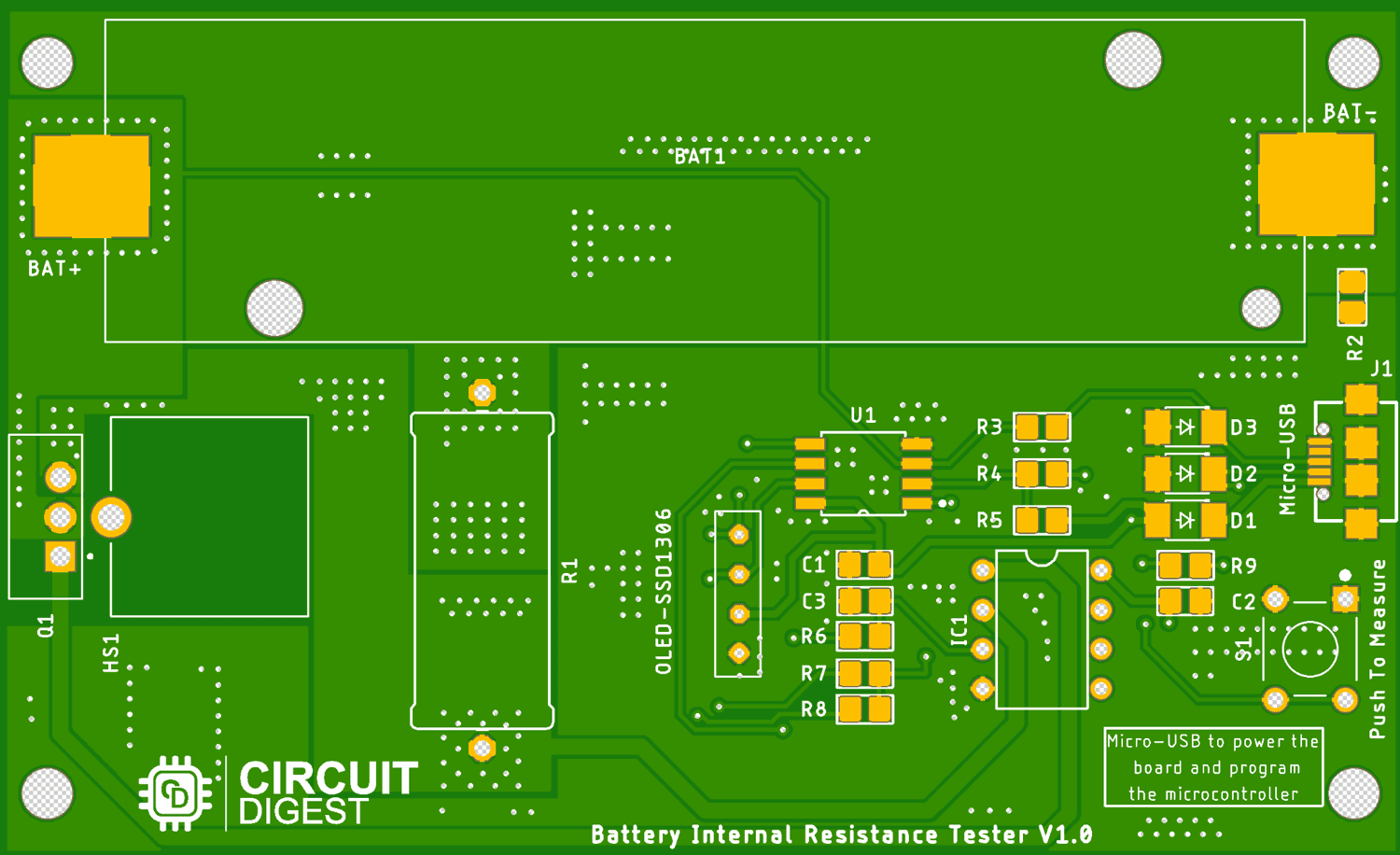 The 2D image of the PCB is shown above. It is a double-layer PCB with proper ground reference. We have placed all the components on the top side of the PCB and on the bottom side, only the connections are there.

Bottom Side of the ISR Meter PCB 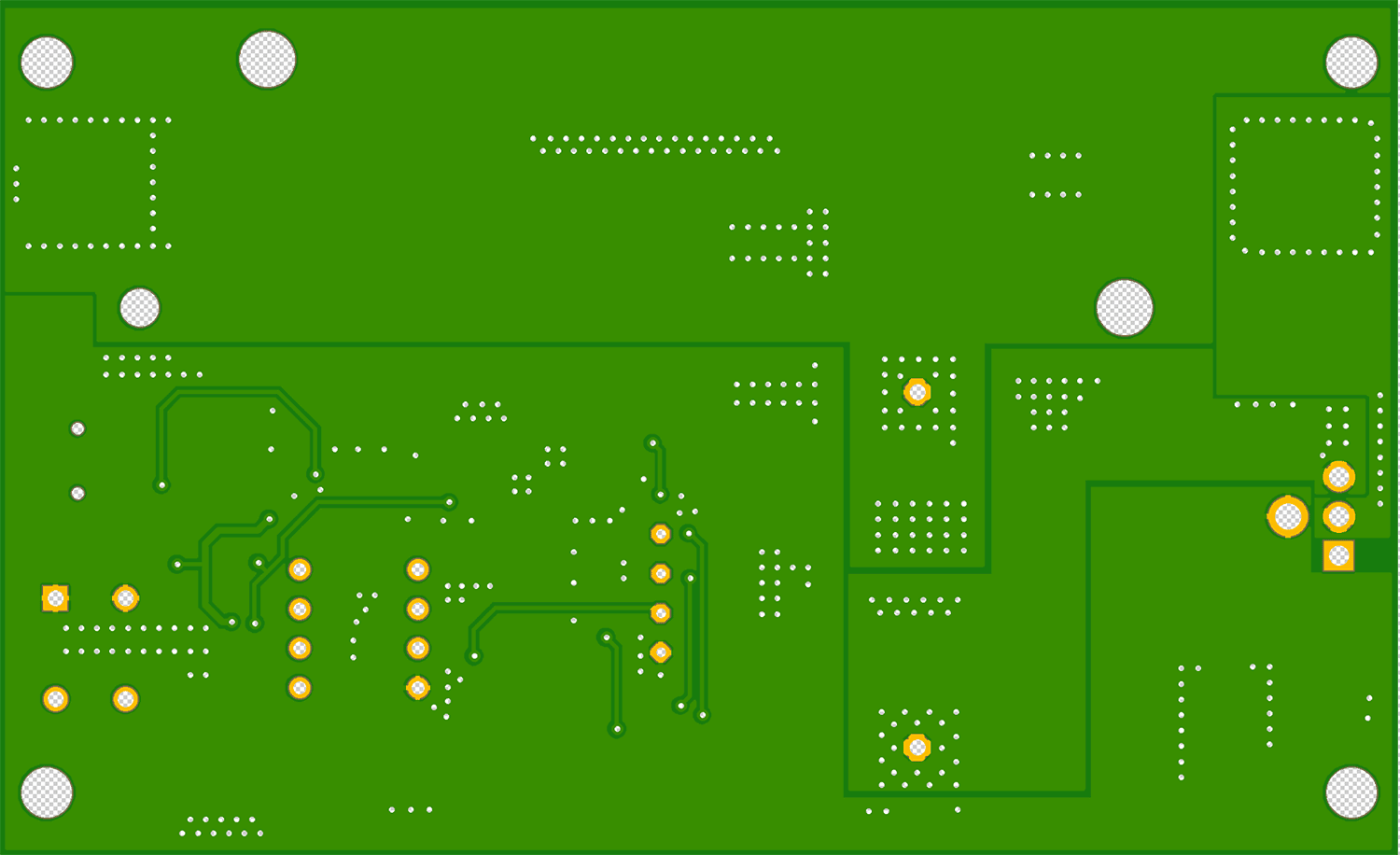 The bottom side of the PCB is shown above and as you can see, we don't have any components on the back side and there are four mounting holes there in the PCB. 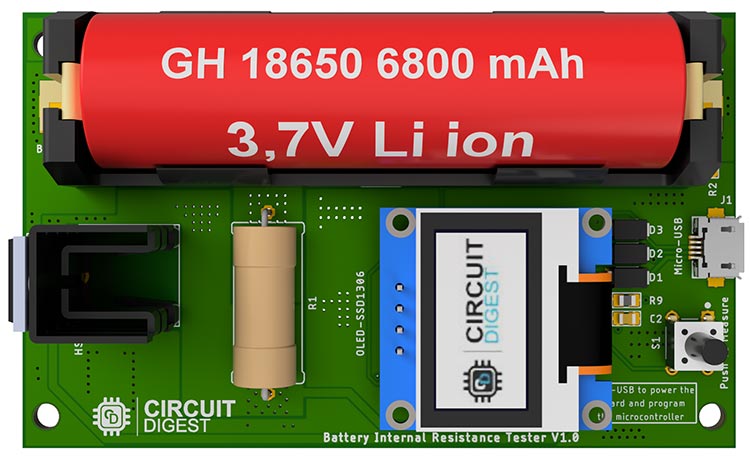 The 3D model of the ISR meter PCB is shown above. In the 3D model, you can see the placement of all the components including the heat sink, the 5W resistor micro USB, and the switch. The opamp and the microcontroller are at the bottom of the LCD. 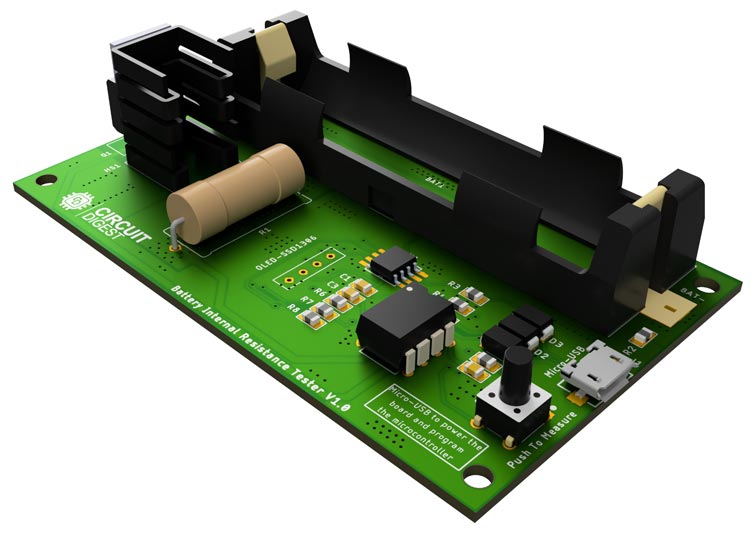 In the image above you can see the placement of the op-amp and the microcontroller.

After finalizing the design, you can proceed with ordering the PCB:

Step 1: Go to www.pcbway.com, and sign up if this is your first time. Then, in the PCB Prototype tab, enter the dimensions of your PCB, the number of layers, and the number of PCBs you require. 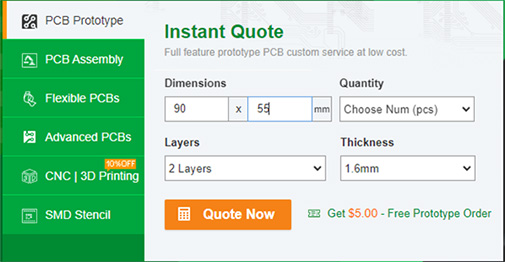 Step 2: Proceed by clicking on the ‘Quote Now’ button. You will be taken to a page where you need to set a few additional parameters like the Board type, Layers, Material for PCB, Thickness, and more. Most of them are selected by default, but if you opt for specific parameters, you can select them here. 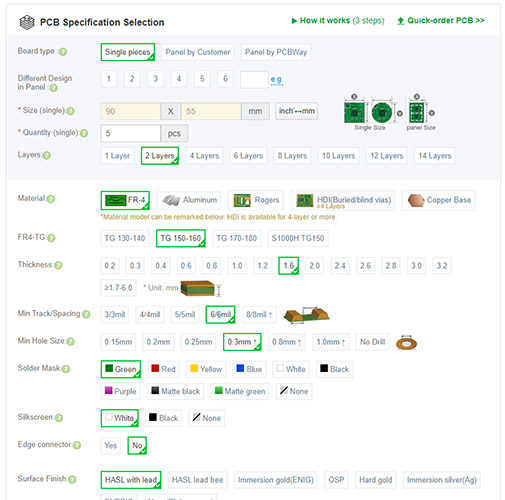 After making sure the tracks and footprints were correct, I proceeded with assembling the PCB. The image here shows what the completely soldered board looks like. 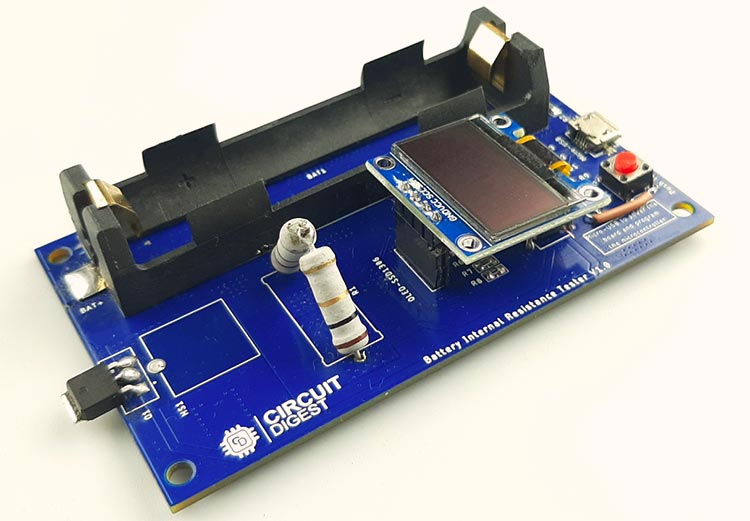 As you can see in the image, all the components are soldered properly. As mentioned earlier, all the components for this project are easily available so the replication of the project is very easy. You can also download the Gerber File so you can order your PCB if you need to.

Arduino Code to Program the Onboard Attiny85 Microcontroller

The code for this project is extremely simple and easy to understand. But before we start our project, we need to download the SSD1306_minimal header file and put it inside our code folder. Once we do that we can start our code process.

We start our code by including all the required libraries. There are only two libraries that we need to include and those are:

Next, we create an instance for SSD1306_minimal through which we can access all the functions simultaneously.

Next, we have defined all the pins and the variables for the project.

Next, we have our setup function, in the setup function, we have set the analog pin as input and the PWM pin as output and also set that to low to prevent false triggering. Next, we initialize the display with the I2C address of the display and we clear the display. Then we call the measure_value() and end the setup() function.

Finally, we have the measure_value() function in which we call the startscreen() method to clear the display.

Next, we measure the unloaded voltage and calculate the theoretical current through the resistor and print it to the display.

Then, we make the PWM pin of the microcontroller high and calculate the load voltage across the resistor.

Now we have all the required values and we can calculate the internal series resistance of the battery.

This is the end of the code portion of the Arduino. If you have difficulty understanding the code, you can refer to the above section in the code.

Once the assembly of the PCB was done and the code was uploaded, we started testing the PCB. First, we powered up the PCB and checked to see if the op-amp pin and the microcontroller pin were getting 5V and we also made sure that there were no short circuits on the board. 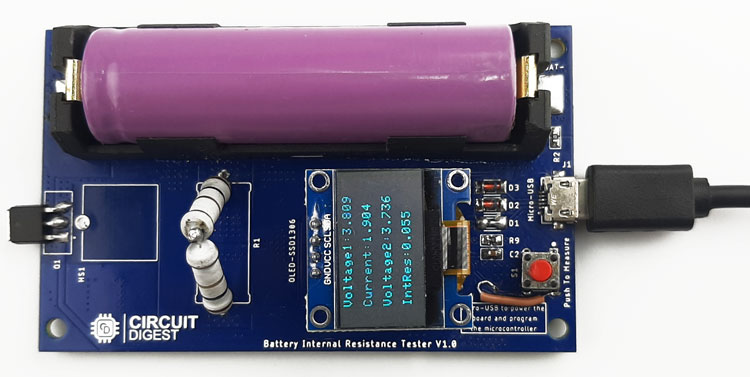 Once the code is uploaded, you can see it gives us the resistance value in milliohms and for the accuracy test we have compared it to a professional meter and the result of that is shown below. 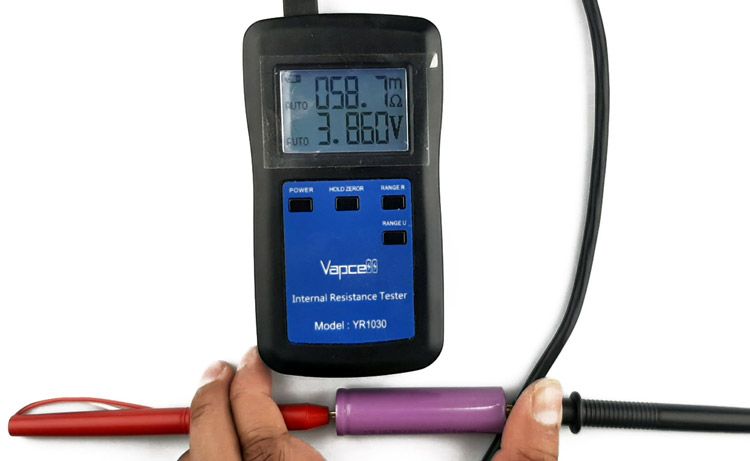 As you can see in the above two images, our meter can active pretty decent results when it comes to accuracy.

Problems we found and the solution we have come up with while testing the PCB board.

The PCB we made was not perfect and found some problems while we were working with it.

The first problem we found was the problem in the MOSFET. While placing the MOSFET, the connection got mirrored so we need to connect the MOSFET in the opposite direction.

The next problem was also regarding the MOSFET. In order for the MOSFET to turn on, we need MOSFETS like IRLZ44N, IRF540 but at the moment of building the project, we don't have those values, so we had to put a SMD MOSFET in place of the TO-220 one.

The next major problem is with the power section of the board. You see the main power for the board comes from the USB cable and depending upon the cable length, the voltage value varies. Now as the ADC accuracy depends upon the input voltage, the error rate goes very high.

This meter is not able to measure the internal resistance if the battery voltage is below 3 volts.