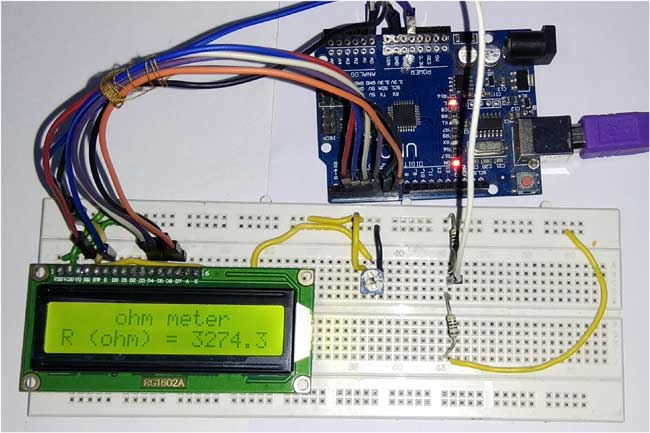 We find it difficult to read color codes on resistors to find its resistance. In order to overcome the difficulty of finding the resistance value, we are going to build a simple Ohm Meter using Arduino. The basic principle behind this project is a Voltage Divider Network. The value of the unknown resistance is displayed on 16*2 LCD display. This project also serves as 16*2 LCD display interfacing with Arduino. 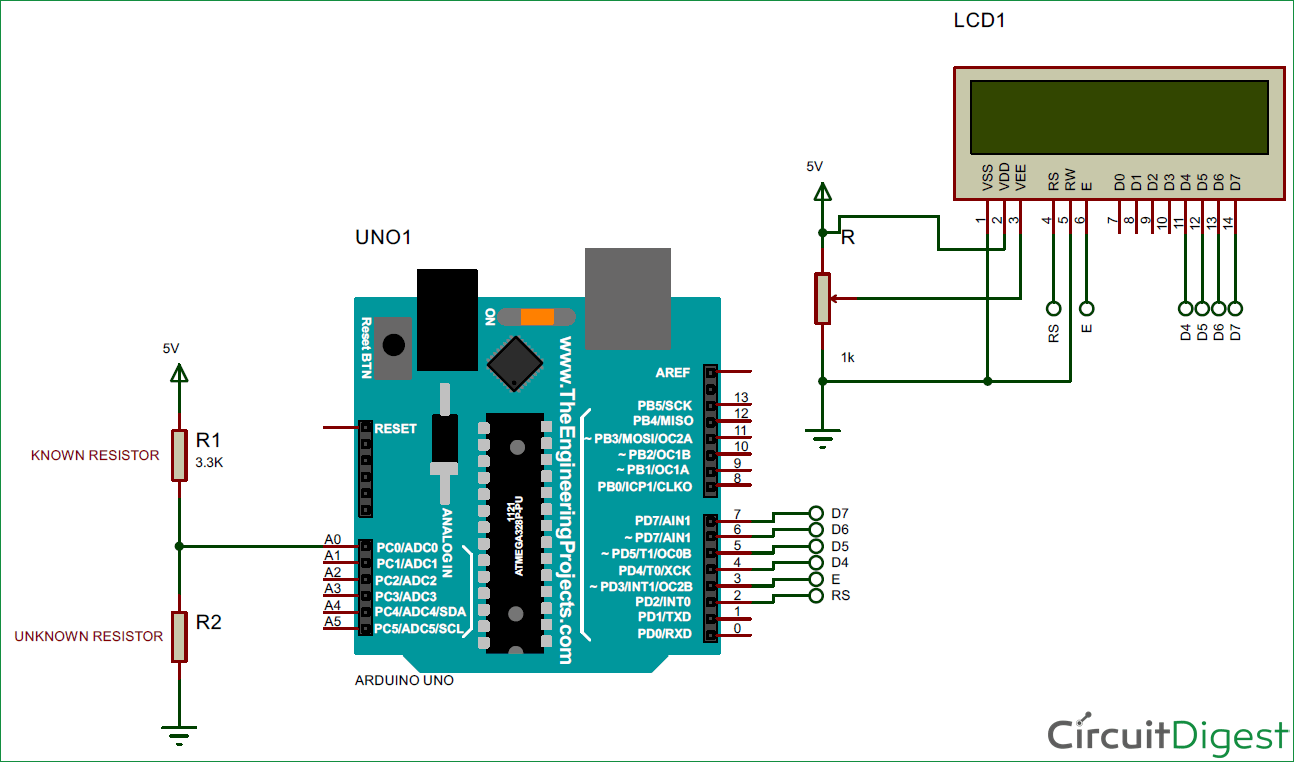 Arduino Uno is a open source microcontroller board based on ATmega328p microcontroller. It has 14 digital pins (out of which 6 pins can be used as PWM outputs), 6 analog inputs, on board voltage regulators etc. Arduino Uno has 32KB of flash memory, 2KB of SRAM and 1KB of EEPROM. It operates at the clock frequency of 16MHz. Arduino Uno supports Serial , I2C , SPI communication for communicating with other devices. The table below shows the technical specification of Arduino Uno.

16*2 LCD is a widely used display for embedded applications. Here is the brief explanation about pins and working of 16*2 LCD display. There are two very important registers inside the LCD. They are data register and command register. Command register is used to send commands such as clear display, cursor at home etc., data register is used to send data which is to be displayed on 16*2 LCD. Below table shows the pin description of 16*2 lcd.

To identify the value of the resistance we can use the below formula.

A = Value of the color in the first band.

B = Value of the color in the second band.

C = Value of the color in the third band.

T = Value of the color in the fourth band.

The table below shows the color code of resistors.

For example, if the color codes are Brown – Green – Red – Silver, the value of resistance is calculated as,

Therefore the actual resistance value can be anywhere between 1350Ω to 1650Ω.

To make it more convenient here is the Resistance Color Code Calculator where you only need enter the color of rings on resistor and you will get the resistance value.

The working of this Resistance Meter is very simple and can be explained using a simple voltage divider network shown below.

From the voltage divider network of resistors R1 and R2,

From the above equation, we can deduce the value of R2 as

Vin = voltage produced at the 5V pin of Arduino

Vout = voltage at R2 with respect to ground.

Note: the value of known resistance (R1) chosen is 3.3KΩ, but the users should replace it with the resistance value of resistor they have chosen. 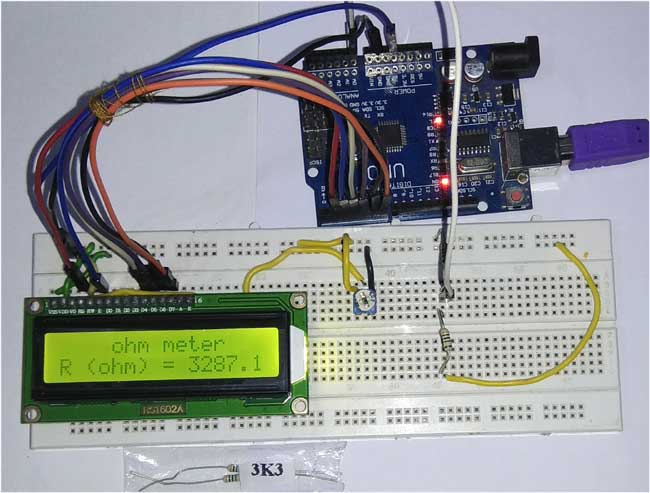 So if we get the value of voltage across unknown resistance (Vout), we can easily calculate the unknown resistance R2. Here we have read the voltage value Vout using the analog pin A0 (see the circuit diagram) and converted those digital values (0 -1023) into voltage as explained in Code below.

The complete Arduino program and Demo Video for this project is given at the end of this project. The code is split into small meaningful chunks and explained below.

In this part of the code, we are defining some variables that are used in the program. Vin is the voltage provided by 5V pin of arduino. Vout is the voltage at resistor R2 with respect to ground.

In this part of the code, we are going to initialize 16*2 lcd display. The commands are given to 16*2 lcd display for different settings such as clear screen, display on cursor blinking etc.

In this part of the code, the analog voltage at the resistor R2 (A0 pin) is converted to digital value (0 to 1023) and stored in a variable.

In this part of the code, the digital value (0 to 1023) is converted into voltage for further calculations.

In this part of the code, the actual value of unknown resistance is calculated using the procedure as explained above.

In this part of the code, the value of the unknown resistance is printed on 16*2 lcd display.

This is we can easily calculate the resistance of an unknown resistor using Arduino. Also check:

Ye hi dude, i want to know whether the code works or not?

yes , this code works fine.
u can check the video.

Hi thanks for all your work, but I cant see where the yellow wire going behind the lcd also I dont see in your code anything about the Potentiometer (1 kilo Ohm) sorry I am new to this.
also bread board is not clear where the + & -- are .

1. It looks like some of the project is not finished. Is there a way to add a resistor in place of the Potentiometer? 2. Also, can the 5 volts lines be added to the Uno board 5 volt source? 3. There is an R and 1k near the potentiometer; Does that mean Another resistor of potentiometer information?  4. Also, some boards have an i2c serial interface adapter with a built in potentiometer; Can that be used as well?

Does that mean Another resistor of (or) potentiometer information?

Is there a way to add a

Is there a way to add a resistor in place of the Potentiometer?

Yes you can add the ressitor in place of the POT

Also, can the 5 volts lines be added to the Uno board 5 volt source?

Yes it can be

I am also not sure with that, I belive it is the value of the resistor

Also, some boards have an i2c serial interface adapter with a built in potentiometer; Can that be used as well?

Not sure which board you are talking about, so cant help with this