Consider a fast-moving car, if it suddenly gets hit by another car in opposite direction, the first thing that happens is that, the accelerometer sensor present in the car senses a sudden de-acceleration and triggers an external interrupt to the microcontroller present in the car. Then based on that interrupt the microcontroller produces an electric signal to deploy the airbags immediately. Microcontrollers present in the car monitor many things simultaneously like sensing the speed of the car, checking other sensors, controlling air conditioner temperature etc. So what makes a sudden opening of an airbag in seconds? The answer is interrupts, an interrupt signal is used here which has the highest priority of all.

Another simple example of Interrupts is touch screen mobile phones which have the highest priority to the “Touch” sense. Almost every electronic device has some kind to interrupts to ‘interrupt’ the regular process and do some higher priority things on a particular event. The regular process is resumed after serving the Interrupt.

So technically, Interrupts is a mechanism by which an I/O or instruction can suspend the normal execution of the processor and gets itself serviced like it has higher priority. For example, a processor doing a normal execution can be interrupted by some sensor to execute a particular process that is present in ISR (Interrupt Service Routine). After executing the ISR processor can again resume the normal execution.

There are two types of interrupts:

Hardware Interrupt: It happens when an external event occurs like an external interrupt pin changes its state from LOW to HIGH or HIGH to LOW.

Software Interrupt: It happens according to the instruction from the software. For example Timer interrupts are software interrupt.

Now we will see how to use interrupts in Arduino Board. It has two types of interrupts:

These interrupt are interpreted by hardware and are very fast. These interrupts can be set to trigger on the event of RISING or FALLING or LOW levels.

Arduinos can have more interrupt pins enabled by using pin change interrupts. In ATmega168/328 based Arduino boards any pins or all the 20 signal pins can be used as interrupt pins. They can also be triggered using RISING or FALLING edges.

In order to use interrupts in Arduino the following concepts are need to be understood.

Interrupt Service Routine or an Interrupt handler is an event that has small set of instructions in it. When an external interrupt occurs, the processor first executes these code that is present in ISR and returns back to state where it left the normal execution.

ISR has following syntax in Arduino:

digitalPinToInterrupt(pin): In Arduino Uno, NANO the pins used for interrupt are 2,3 & in mega 2,3,18,19,20,21. Specify the input pin that is used for external interrupt here.

ISR: It is a function that is called when an external interrupt is done.

Some Conditions while using Interrupt 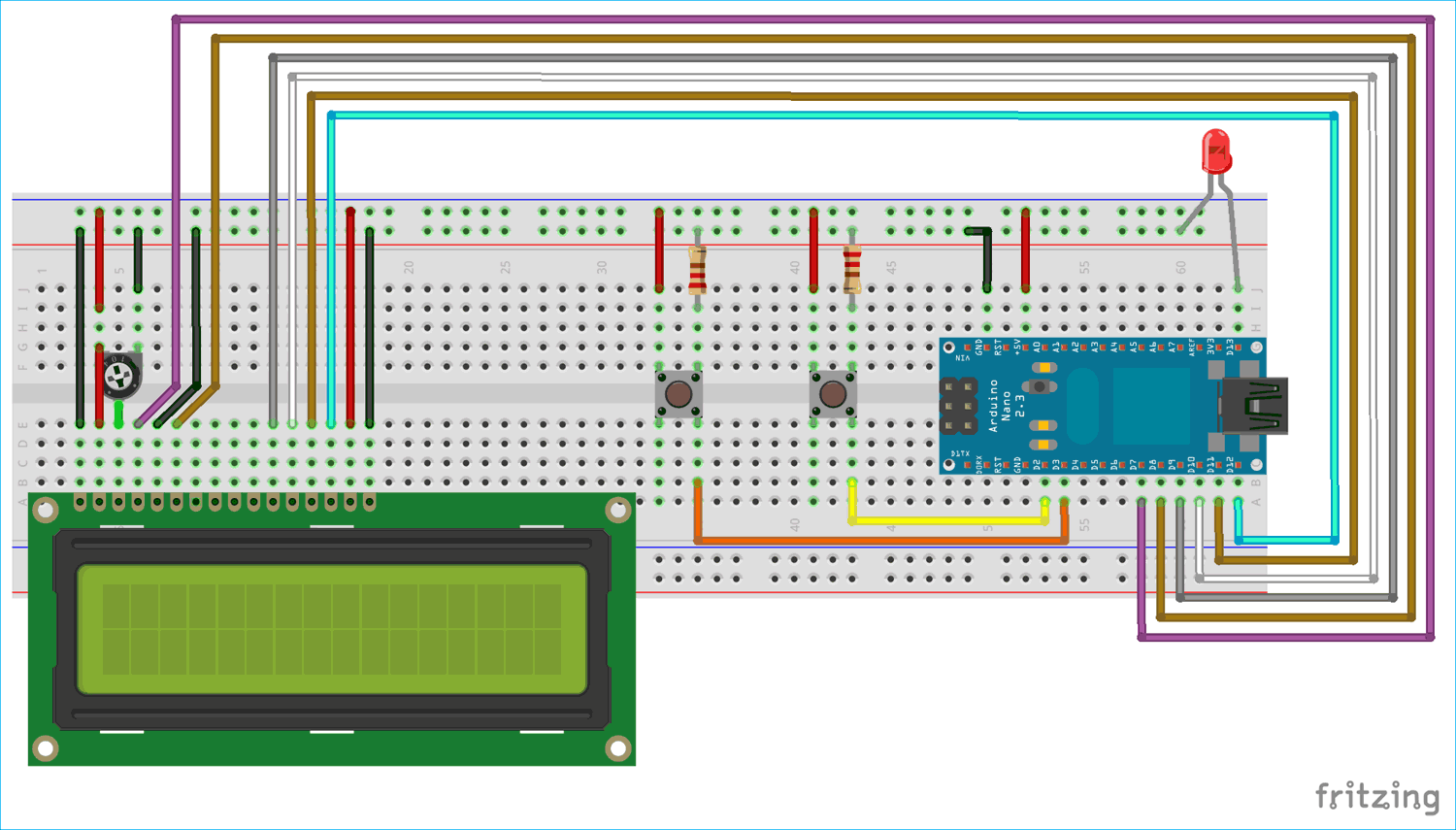 Two push buttons are connected to Arduino Nano at pin D2 & D3. They are used for using two external interrupts, one for turning LED ON and another for turning OFF a LED. Each push button has a pull down resistor of 10k connected to ground. So when push button is pressed it is logic HIGH (1) and when not pressed it is logic LOW (0). A Pull down resistor is compulsory otherwise there will be floating values at the input pin D2 & D3.

A LED is also used to indicate that a Interrupt has been triggered or a button has been pressed.

Complete Code with a working video is given at the end of this tutorial.

1. First the header file for the LCD display is included and then the LCD pins that are used in connecting with the Arduino Nano are defined.

3. Then in same void setup () function the input and output pins must be specified. The pin D13 is connected to LED’s Anode, so this pin must be defined as output.

4. Now the main important part in the programing comes that is attachInterrupt() function, it is also included inside the void setup().

In same void loop(), digitalWrite() is used on the pin D13 where LED’s anode is connected. Depending upon the value in variable output LED will turn on or off

6. The most important part is creating a interrupt handler function according to the name that is used in the attachInterrupt() function.

As two interrupt pins are used 2 and 3 so two ISR are required. Here in this programming following ISR are used

This function executes when push button on the pin D2 is pressed (RISING EDGE). This function changes the state of the output to LOW causing LED to turn OFF and prints the “interrupt1” on the LCD display.

This function executes when push button on the pin D3 is pressed. This function changes the state of the output to HIGH causing LED to turn ON and prints the “interrupt2” on the LCD display.

1. When PUSH BUTTON on the leftside is pressed the LED goes ON and the LCD displays Interrupt2. 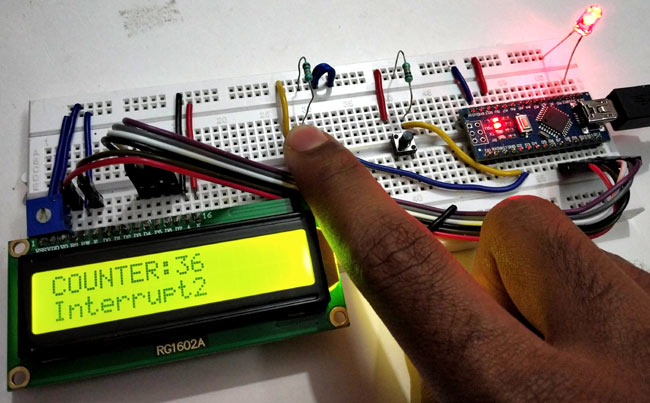 2. When the PUSH BUTTON on the right side is pressed the LED goes OFF and the LCD displays Interrupt1 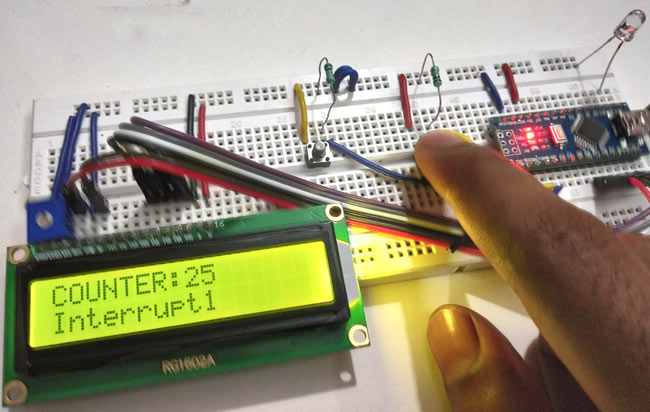 This is how an Interrupt can be useful to trigger any important task in between of normal execution.