In this project we are going to make a Buck Converter Circuit using Arduino and N-Channel MOSFET with a maximum current capacity of 6 amps. We are going to step down 12v DC to any value between 0 and 10v DC. We can control the output voltage value by rotating the potentiometer.

Key components of buck converter are mosfet; either n-channel or p-channel and high frequency Square Pulse Generator (either a timer IC or microcontroller). Arduino is used here as Pulse Generator, a 555 Timer IC can also be used for this purpose. Here we have demonstrated this Buck converter by controlling DC-Motor speed with Potentiometer, also tested the voltage using Multimeter. Check the Video at the end of this article.

Make connections as shown in circuit diagram above for DC-DC Buck Converter. 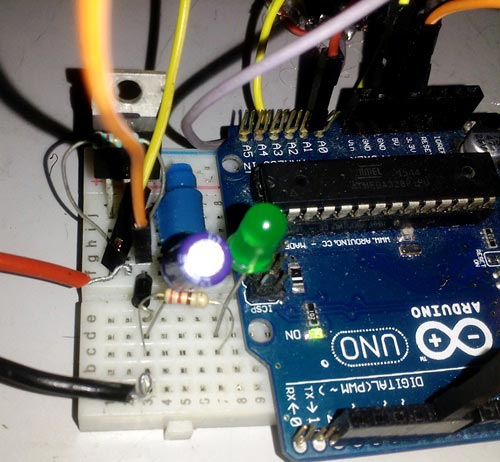 As already explained, Arduino sends clock pulses to base of MOSFET. Frequency of these clock pulses is approx. 65 Khz. This causes very fast switching of mosfet and we obtain an average voltage value. You should learn about ADC and PWM in Arduino, which will clear you how high frequency pulses are generated by Arduino:

Mosfet is used for two purposes:

Function of Schottky Diode:
Schottky diode completes the loop of current when mosfet is switched off and thus ensuring smooth supply of current to load. Apart from this, schottky diode dissipates very low heat and work fine at higher frequency than regular diodes.

When wiper terminal of potentiometer is thrown off to different position, voltage between it and ground changes which in turn changes the analog value received by pin A1 of arduino. This new value is then mapped between 0 and 255 and then given to pin 6 of Arduino for PWM.

** Capacitor smooths out voltage given to load.

Why resistor between gate and source?

Even slightest noise at gate of MOSFET can turn it on, hence to prevent this from happening it is always advised to connect high value resistor between gate and source. 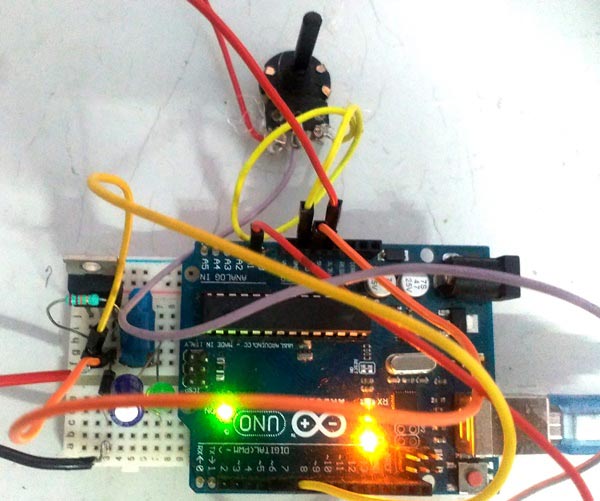 Complete Arduino code, for generating high frequency pulses, is given in the code section below.

Code is simple and self-explanatory, so here we have explained only few parts of code.

Variable w is assigned the mapped value which is between 0 and 255. Here the ADC values of Arduino are mapped to 2 to 255 using map function in Arduino.

Normal frequency of PWM for pin 6 is approx.1khz. This frequency is not suitable for purposes like buck converter. Hence this frequency must be increased to a very high level. This can be achieved using a one line code in void setup:

When circuit is switched on, mosfet switches on and off with a frequency of 65 khz. This causes inductor to store energy when mosfet is on and then give this stored energy to load when mosfet switches off. Since this happens at very high frequency, we get an average value of pulsed output voltage depending on the position of wiper terminal of potentiometer with respect to 5v terminal. And as this voltage between wiper terminal and ground increases so does the mapped value on pwm pin no. 6 of Arduino.

And since MOSFET is a voltage dependent device, this pwm voltage ultimately determines the voltage across load. 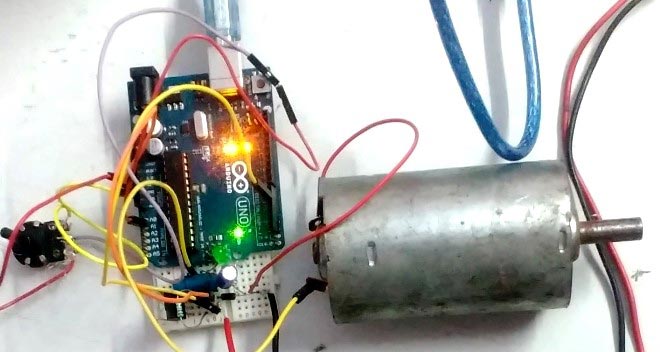